We find that the Bretton Woods Institutions—the IMF and the World Bank—as well as the European Investment Bank (EIB) and the Asian Development Bank (AsDB) have mobilized the largest amount of support among the institutions reviewed. Through May 12, the IMF approved about $32 billion in financing, including the renewal of Colombia’s Flexible Credit Line (FCL). (This amount would increase to $67 billion if Peru’s and Chile’s FCL requests are approved by the IMF’s executive board as expected.) In general, the IMF’s rapid response reflects its traditional role in addressing balance of payments crises, as well as the pre-Covid-19 existence of fast-disbursing emergency facilities.

Among the multilateral development banks (MDBs), we estimate the EIB has approved over $8 billion in loans; the World Bank and AsDB each have approved about $6 billion; while the New Development Bank (“BRICS Bank”) has approved two $1 billion emergency assistance loans to India and China, making it the next-largest provider of funding among the MDBs. In total, we count nine MDBs approving more than $25 billion in Covid-19-related assistance since the outbreak began earlier this year through May 12. 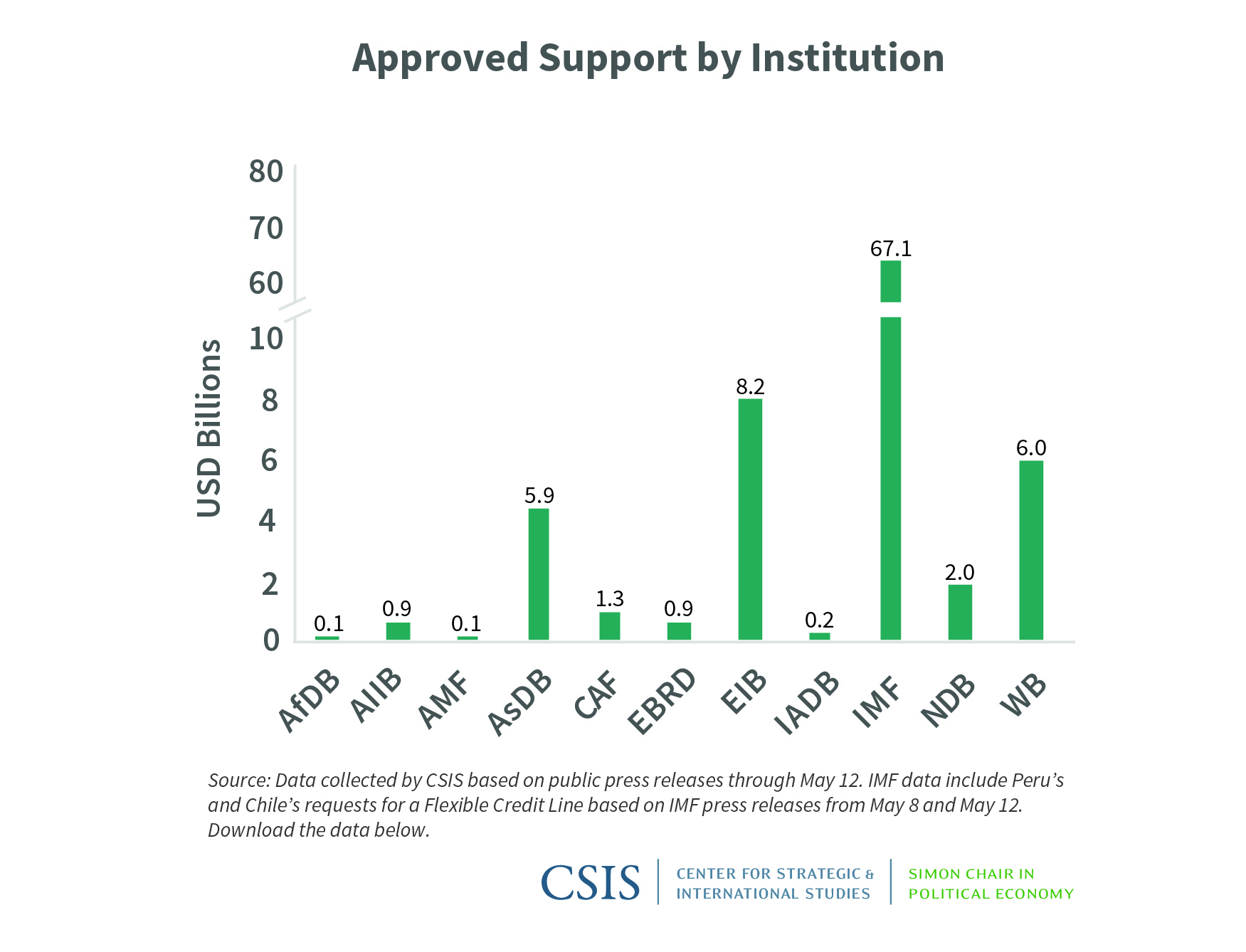 RFAs have yet to approve significant funding for their members; among RFAs, we identify only the Arab Monetary Fund as having disbursed funding “as a support to the reform efforts . . . and [to] provide liquidity in order to contain the negative effects of the virus outbreak.” However, the scale of RFA support could change significantly with the May 15 approval of the European Stability Mechanism (ESM)’s Pandemic Crisis Support, which could provide as much as €240 billion ($264 billion) to euro area countries to finance “direct and indirect health sector costs linked to the pandemic.” 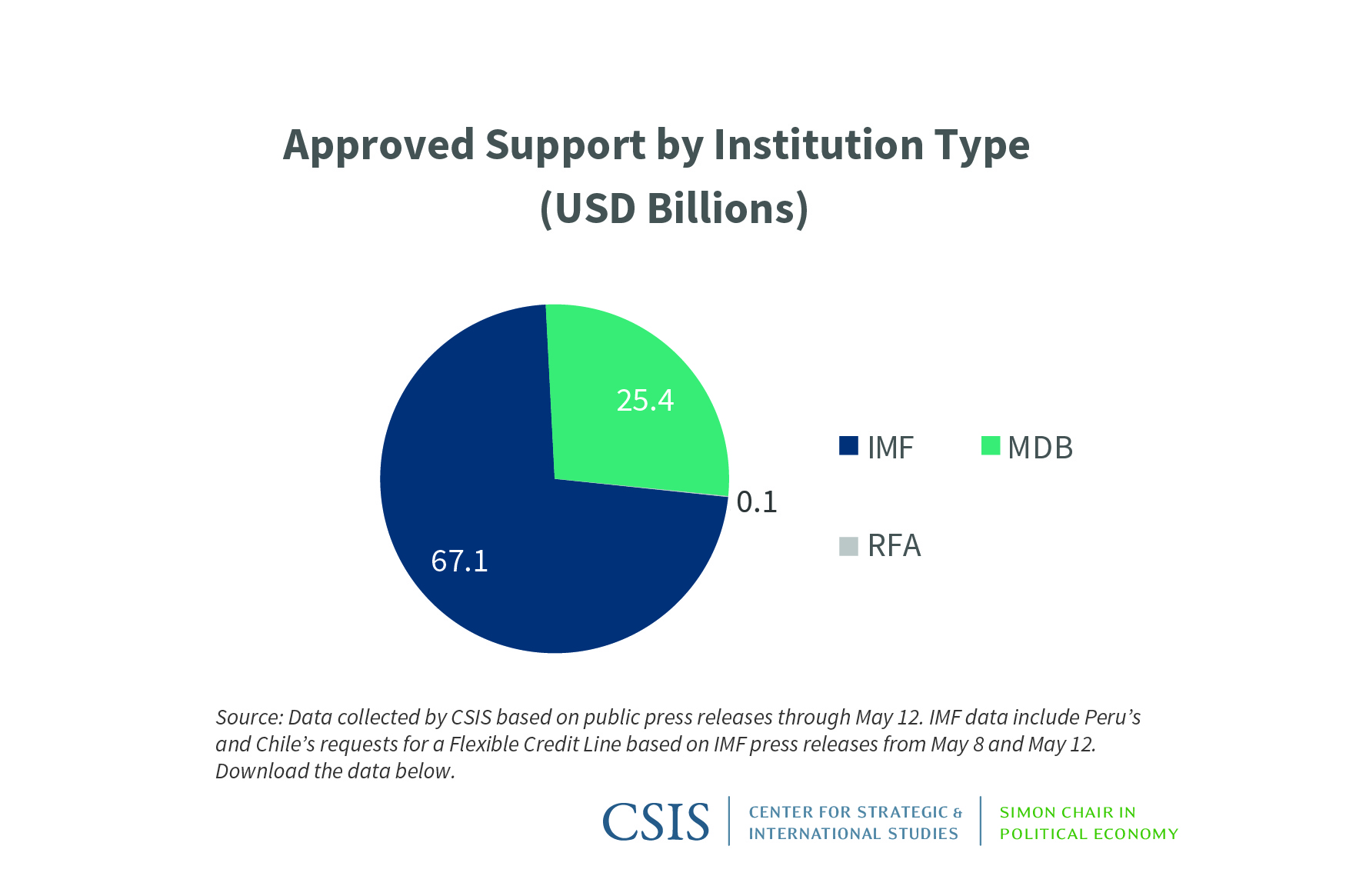 How do approvals compare with financing needs?

The IMF’s managing director estimated financing needs related to the crisis in excess of $2.5 trillion; at just over $92 billion approved (assuming approval of Peru’s and Chile’s FCL requests) and $42 billion disbursed, we estimate funding provided by IFIs and RFAs thus far is a fraction of the anticipated need. What accounts for the difference? In addition to IFI and RFA financing, countries have also relied on their own fiscal and reserve buffers as well as central bank swaps and other innovative financing mechanisms. Timing is certainly another factor: we are just two months from the World Health Organization declaring Covid-19 a pandemic and only reluctantly coming to terms with the magnitude of the economic shock and outlook for a protracted recovery. That recovery is likely to be even slower for economies dependent on tourism, commodity exports, and remittances. More funding requests are surely on the way.

There may also be a mismatch between where funding is available and where it is needed. While financing needs are large in Europe, Europe also has significant regional resources: the ESM has been the most forward-leaning among RFAs; the EIB the most active among regional MDBs; and the European Central Bank able to address liquidity needs for euro area countries. By contrast, many middle- and low-income countries have smaller buffers; less active regional institutions; and are less able to rely on unconventional monetary policies. It’s in these economies where the IFIs are needed most. 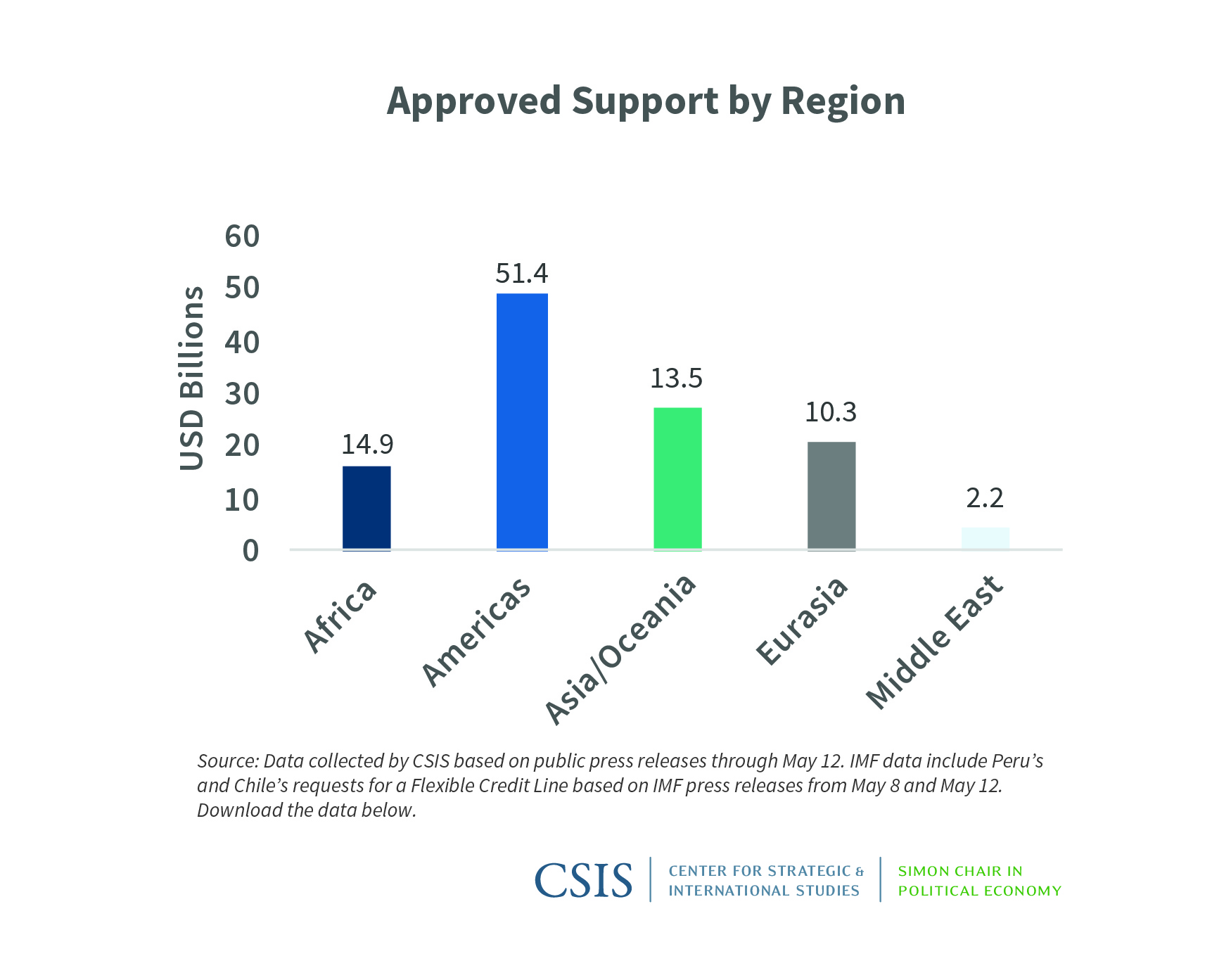 Concerns about debt sustainability, however, will impact the institutions’ abilities to respond to funding needs. IFIs generally depend on repayment to maintain shareholder support and to preserve high investment grade ratings, which in turn support the institutions’ market access and low cost of funding. IFIs also rely on their “preferred creditor” status and “financing assurances” to give confidence that other creditors will not be repaid ahead of them.

Today, the ability of potential lenders to assess debt sustainability is complicated by various factors. A country’s repayment capacity depends on the size of its economy, but forecasting growth in the midst of a pandemic with so many unknowns—ranging from the evolution of the virus, to the pace of technological advances to treat and prevent its spread, to the effectiveness of policy responses—makes it impossible to forecast with a high degree of confidence. Inputs to economic forecasts are also highly uncertain: Where will commodity prices be a year from now? How will the pandemic impact consumer behavior over the medium-term? How long will it take for employment to recover? Finally, debt sustainability depends on knowing the current level of indebtedness, which may include contingent liabilities that come to light in times of stress. This uncertain starting point complicates any assessment of sustainability.

Uncertainty also makes finding cooperative approaches to addressing urgent financing needs more difficult but more essential than ever: no potential creditor wants to bail-out another, but the failure to approach the current crisis in a coordinated fashion could prevent the IFIs from playing their part in the crisis response. Earlier this week, a former IMF chief economist suggested a widespread debt moratorium might be needed for emerging markets and developing economies. G20 finance ministers took an initial step toward a coordinated approach with the April agreement to provide debt service relief—the Debt Service Suspension Initiative—for the poorest nations through the end of this year. But the limited relief effort falls short of what many countries will ultimately need and was followed by reports that China, the largest official creditor to many low-income countries, will not fully participate. For their part, private-sector creditors have signaled a reluctance to meet the G20’s call “to participate in the initiative on comparable terms,” raising fears that any official sector support would serve to bail out private creditors.

To imagine a world in which scores of middle- and low-income countries are separately renegotiating their obligations is to imagine a crisis deeper and more protracted than necessary. The alternative requires leadership and cooperation at the highest levels; both have been in short supply but will ultimately prove to be the only way forward.

This analysis is based on publicly available information; any corrections and/or clarifications will be included in future updates.

Totals do not include financing through the European Commission’s SURE initiative, which provides funding to European Union Member States of up to €100 billion ($108 billion) by covering part of the costs related to the creation or extension of national short-time work schemes.

Our dataset of IFI responses is available for download here.