The latest events in Iran (the death of Grand Ayatollah Montazeri, whom many considered the reformists’ spiritual leader; the unrest and brutal behavior of the regime’s thugs; the show trials; and the revelations about rape, torture, and executions) are symptoms of a tectonic shift in Iran’s political environment. Despite repeated warnings by the regime’s leaders, the Revolutionary Guards, the Basij, and even the police that demonstrations would be sternly confronted and that many would be arrested, the latest reformist and opposition demonstrations have been extensive and even more daring than those following the June elections. The longer these demonstrations go on in the face of demands by hardliners and even the speaker of the Majlis to arrest and mercilessly handle the opposition, the clearer it is that the focus of the opposition is no longer on Ahmadinejad but the system itself and Supreme Leader Khamenei. The chants of “Death to the Dictator,” the tearing and stomping on images of Khamenei, and the demand for justice clearly show that the protest movement is now questioning the legitimacy of the Islamic Republic.

The regime and Khamenei’s control are not endangered—yet. The Revolutionary Guards and the paramilitary Basij have been ordered to suppress the demonstrations by force in the most brutal manner. The shootings and killings of demonstrators, the massive arrests that have followed, and the casualties that include Moussavi’s nephew are aimed at suppressing the reformist movement. Over 1,000 persons have been arrested since this past weekend’s demonstrations. However, it is questionable whether the movement will quietly dissipate. The events may just as likely lead to a critical standoff between the regime and its opposition. What the outcome will be is difficult to gauge at this point.

Q1: What are the goals of the opposition?

A1: The possibility of dialogue is quickly fading. The conservative regime and Khamenei have indicated that compromise is not an option, and coming up with a political solution without paramilitary intervention is becoming less and less likely. The demands of the opposition have gone beyond the cancellation of elections and now include fundamental changes to the system of government. Now the goal is to weaken the position of the supreme leader and to render him somewhat of a figurehead. A large faction also demands the outright elimination of the role of the supreme leader and the rewriting of the constitution. It is unlikely that these demands will be agreed to by the regime, and thus the demonstrations will likely continue.

Q2: The opposition is ruthlessly beaten down. Do they have a chance to bring about revolutionary change given that they are outgunned if not outnumbered? Are they not simply a coalition of disparate factions?

A2: The opposition does include diverse groups, from young educated urbanites to former presidents and various religious leaders, but the outpouring of public support indicates that they are united in demanding change. The emergence of “people power” should not be underestimated. The opposition so far seems to have the momentum, and the actions of the regime show signs of desperation.

Q3: What other signs of civil disobedience are apparent?

A3: Anti-regime graffiti is appearing on public walls. Pictures of arrested dissidents are circulating, with demands for their freedom; pictures of the Basij members are posted; and protesters are at every government event to express their dissatisfaction. The acts of disobedience are not only coordinated by opposition groups; there are numerous examples of individuals challenging the regime. The math university student who questioned the supreme leader and asked about alleged abuses is a case in point.

On the economic front the people have attacked the currency. So many rial notes have been written on with antigovernment comments in green ink that the central bank attempted to remove them from circulation, but the massive numbers of defaced bills inundated the government. The government has stated these marked currencies are no longer acceptable tender, but the currency campaign continues in force.

Q4: Will this be sufficient to bring about the changes that the opposition is demanding?

A4: The reformists have so far insisted on nonviolence. There has been no looting or attacking of private property. The limited violence toward the Basij and the security and police apparatus has been more in retaliation than a desire to attack. This may change. The police and a number of the Basij have refused to fire on the opposition, and some have joined the demonstrations. Cracks may appear in the Revolutionary Guards, and they may question some of the orders being given. The professional armed forces may speak up and ask why the paramilitary groups such as the Revolutionary Guards and Basij are so ruthlessly beating and murdering citizens.

Iran’s economy has been terribly mismanaged. The Revolutionary Guards have benefited from preferential funding support and access to investments. The corruption and mismanagement has made the economy one of the worst performers in the region. Per capita income has risen much more rapidly in the Emirates, Saudi Arabia, and Kuwait than in Iran. Azeris in Azerbaijan have seen their lives improve much faster than Iranians, and Turkey, without oil or gas resources, has seen its economy outpace Iran’s. The private sector and the bazaar have been marginalized, and all significant projects are given to the Revolutionary Guards who possess little business acumen. Meritocracy is dead and corruption rampant. At what point will the bazaar and the industrial sector say “Enough is enough”?

The 1979 revolution against the shah was preceded by massive strikes, and it was the economic impact of the strikes that had much to do with the fall of that regime. At some point, the bazaar may close and critical industries such as the oil sector may strike. If these events occur, we may see what Robin Wright calls “Iran’s Berlin Wall moment.” But for now, we can only wait to see what the Iranian public does.

Q5: What can the United States and the international community do?

A5: Until President Obama’s speech in Copenhagen, the U.S. posture toward Iran was overly cautious. The United States did not wish to upset the regime while negotiations about the nuclear issue are pending. Some argued that supporting the reformists and the opposition would discredit these groups as stooges of the West. The opposition’s call—asking “Obama, are you with us or not?”—helped change the U.S. posture. In the Copenhagen Nobel Prize speech, Obama condemned the unjust and violent suppression of innocent Iranian citizens. On December 28, he reiterated that position in even stronger language. All nations should condemn such barbaric behavior. We should stop worrying excessively about the damage we might cause the opposition by publicly siding with them. The Iranian regime will blame foreign governments for their own mismanagement and oppressive behavior no matter what the U.S. administration says or does. We can take steps to facilitate the use of the Internet for uncensored communication and provide moral support to the Iranian demonstrators who are risking their lives and livelihood to demand more freedom and a better life.

In the end, this is an internal matter for the Iranian people, but the behavior of the regime is such that no civilized nation or citizenry should deem it acceptable or tolerable. All should express disgust and condemnation.

Fariborz Ghadar is a senior adviser and distinguished senior scholar at the Center for Strategic and International Studies in Washington, D.C. 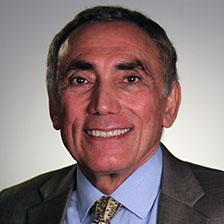 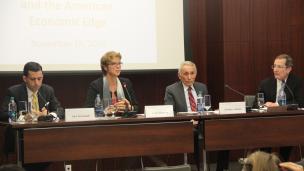