Iran and the Gulf Military Balance

The focus on ISIS and terrorism deals with only one key aspect of the threats in the Gulf. The nuclear agreement with Iran has eased one key aspect of military confrontation in the region, but there still are major military risks in terms of Iran’s influence over other states like Iraq, Syria, and Lebanon; its growing naval-missile-air threat to maritime traffic in the Gulf and the flow of petroleum exports; and its growing conventional missile forces—which it is now seeking to give precision strike capability.

The end result is a massive arms race within the region, and a de-facto military alliance between the United States, key Arab states, and European power projection forces that is critical to deterring Iran and limiting the risk of war. This alliance is underpinned largely by U.S. forces and power projection capabilities, and the forces of Saudi Arabia and the UAE, although Bahrain, Kuwait, Oman, Qatar, Britain, and France also play an important role. It is an alliance which not only is critical to protecting the stable flow of world petroleum exports, but neighboring states like Egypt, Israel, Jordan, and Lebanon.

It is an alliance, however, that is only poorly understood both by most Americans and most Arabs. This lack of U.S. understanding has helped lead to the passages of the Justice Against the Sponsorship of Terrorism Act (JASTA) that now threatens U.S. and Saudi security ties, in spite of the fact that no material evidence has emerged of any meaningful Saudi official ties to the terrorist attacks on 9/11.

The risks involved are all too clear. Iran is a growing military threat, and its influence over Syria and Iraq has far more strategic importance than its long standing influence over the Hezbollah in Lebanon. ISIS is only one faction shaping the wars in Iraq, Syria, and Yemen—and regional instability in the Gulf.

The combined threat posed by Iran and regional instability is critical in a region where the Strait of Hormuz is the world's most important chokepoint with an oil flow of 17 million barrels per day in 2013, about 30% of all seaborne-traded oil, plus some 30% of the world’s exports of liquid natural gas, and where 85% of the crude oil that moves through this chokepoint goes to to Asian markets whose exports are critical to the United States and the rest of the global economy.

A new report by Anthony H. Cordesman and Abdullah Toukan updates past Burke Chair assessments of the Gulf military balance, and examines all of these critical trends in Iran, regional military instability, Arab forces, and U.S. and other outside forces. This report is entitled Iran and the Gulf Military Balance, and is available on the CSIS web site at http://csis-website-prod.s3.amazonaws.com/s3fs-public/publication/161004_Iran_Gulf_Military_Balance.pdf.

The Changing Balance in the Gulf

The report shows that the classic military balance in the Gulf region is driven by an accelerating arms race between Iran and its Arab Gulf Neighbors. The Arab countries are decisively winning this arms race. This aspect of the balance is also shaped by outside forces, particularly by the level of U.S. commitment and power projection capability to assisting its Arab security partners, although Russia and China are potential wild cards.

The balance, however, is also increasingly shaped by internal conflicts and divisions in Iraq, Syria, and Yemen and the impact of “failed state wars” on the relative strategic influence of Iran versus other Arab states and the United States.

It is also shaped by Iran’s steadily improving capabilities for asymmetric warfare in supporting pro-Iran elements in Arab states, in developing the capability to threaten maritime traffic in and near the Gulf, and in posing a ballistic and cruise missile threat to its Arab neighbors that compensates for its limited conventional capabilities.

The threat of violent religious extremism, and the growing impact of non-state actors pose yet another major set of threats, and make counterterrorism and counterinsurgency increasingly important aspects of the military balance.

At the same time, the P5+1 (JCPOA) nuclear agreement with Iran delays, but does not end the nuclear and WMD competition between Iran and its Arab neighbors and the United States.

The end result seems to be a high level of mutual deterrence between regional states, mixed with extremist challenges by non-state actors that do not show any such restraint. This does not, however, prevent threats to use force by state actors in “wars of intimidation,” low level incidents, or proxy wars in competing to support other forces.

It is also a complex mix of different and asymmetric forces, and possible approaches to warfighting, that creates a significant risk for an Arab-Iranian conflict to start or to escalate through miscalculation in unpredictable ways. The resulting risk of conflict is also driven by the actions of non-state actors and violent extremists and the uncertain internal stability of many regional states.

These internal stability risks are compounded by sectarian, ethnic, and tribal tensions, particularly ethnic tensions between Arabs, Persians, and Kurds, and Sunnis and Shi’ites. There has been a massive regional increase in internal security activity, forces, and costs. The data on these aspects of the balance are so suspect, however, that it is not possible to assess the trend and scale in quantitative terms.

Moreover, the “civil balance” in security shaped by factors like politics, quality of governance, corruption, economic development and sharing of wealth, social changes from factors like hyperurbanization, massive population growth and youth employment problems, has generally deteriorated since the uprisings of 2011, and is now affected by massive cuts in petroleum export and tourism income and limited investment.

Iran and the Gulf Military Balance provides a detailed summary and quantitative analysis of these trends in the balance, the potential threats Iran poses and is developing, and the ongoing changes in Arab Gulf, U.S., and allied forces in map, chart, and table form. Its Table of Contents includes: 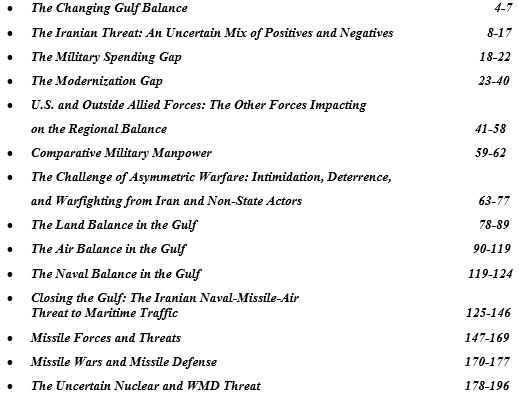 Other Studies Shaping the Gulf Balance and Iranian Threat

Several other Burke Chair studies provide additional material on the threat posed by terrorism and non-state actors and the civil causes of instability and conflict in the region: