Iraq as a Failed State

The last few weeks have shown that Iraqis have effectively run out of patience with what has become yet another failed, corrupt government. Part of this is sheer frustration with the government’s incompetence and corruption – coupled with its failure to develop an effective recovery effort in the large Sunni areas in the West affected by the fight against ISIS, and its chronic failures to meet the needs and expectations of the rest of its population.

What is less apparent, however, is just how bad things in Iraq really are. Its problems are not short-term political issues that can be solved by reforming its government and cutting corruption. They are products of deep sectarian and ethnic tensions and almost continuous war or crisis from the beginning of the Iran-Iraq War in 1980 to the present – a period of some 40 years.

Today’s upheavals are not the result of some sudden form of local “populism.” There has never been a modern government in Iraq that pursued effective efforts at economic development and meeting the broader needs of its people. In some cases, like its agricultural development, and creation of some of the most expensive and unproductive state-owned enterprises (SOEs) in the world, they trace back to at least the fall of the monarchy in July 1958.

These structural problems are so great that they make Iraq the equivalent of a failed state – a reality that the U.S. seems unready to face. They have been compounded by Iran’s exploitation of its influence in Iraq, and by the fact that the defeat of the physical “caliphate” in Iraq has not meant the defeat of ISIS, the end of terrorist attacks and extremism, or the end of ethnic and sectarian tension. At the same time, these problems have been compounded by the lack of any coherent U.S. effort to help Iraq deal with the full range of its structural problems, fully rebuild its military forces, and make it strong enough to become a key buffer between Iran and the rest of the Gulf.

U.S. and Iraqi military-to-military relations remain relatively good at a professional military level, but the U.S. does not seem to have any clear overall policy to deal with Iraq’s deteriorating political, governance, and economic situation, or to support any serious form of national building. In addition, America’s erratic policies in dealing with Syria and Iran, and in checking Russian influence, have created the same growing distrust of the U.S. that affects all of the Arab Gulf states. In short, Iraq shows all too many signs that Iraq is returning to the level of internal instability that led to low-level civil war in 2011 and the rise of ISIS.

The U.S. does need to adjust its broader policies to reestablish Iraqi confidence in America’s ability to lead and act in the Gulf, but it also needs to address Iraq’s deep structural failures as a state. The U.S. should not repeat its past mistakes in nation building and in imposing its own systems and values regardless of Iraq’s needs and capabilities. It must, however, be realistic and help Iraq move forward – just as it needs to be equally realistic about the failures of the host country governments in its other wars – issues addressed in another Burke Chair study entitled Afghanistan, Iraq, Syria, Libya, and Yemen: The Long-Term Civil Challenges and Host Country Threats from ‘Failed State’ Wars.

This report entitled, Iraq as a Failed State, and is available for download at https://csis-website-prod.s3.amazonaws.com/s3fs-public/publication/191118_Iraq_Failed_state_report.pdf. 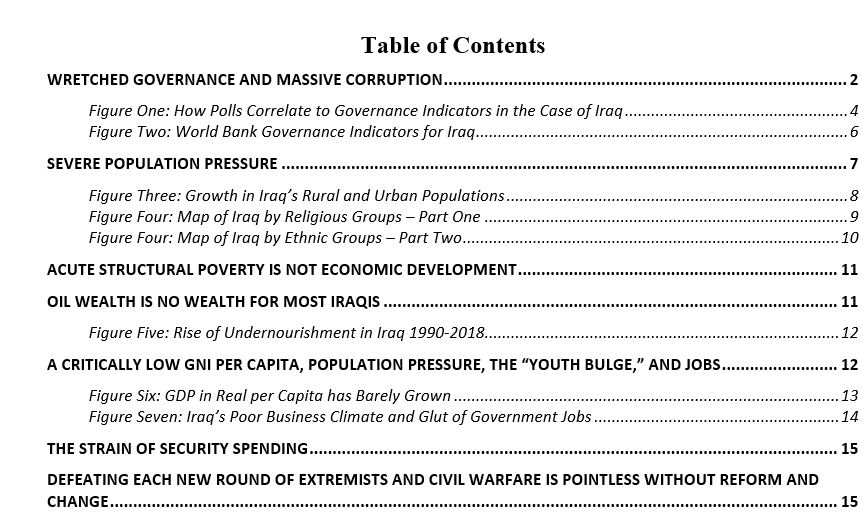 Downloads
Download "Iraq as a Failed State"
Written By