The Burke Chair at CSIS is presenting a commentary by an affiliate of the organization. Dr. Munqith Dagher is an Iraqi expert and a Senior Associate with CSIS, whose biography is summarized below.

There are many causes of instability in Iraq, but one that gets far too little attention is the sharp erosion of its middle class and the subsequent rise in conflict and populist ideology. This rise is evident not only across social media platforms but also amongst politicians and so-called intellectuals. Iraq’s middle class affects a critical part of its social structure and stability.

It is this middle class that acts as a buffer against social crises and has the capacity to propel the country’s creativity and economy forward. Some very alarming data about the percentage distribution of the social classes in Iraq was released recently. Many of the social, political, and economic crises facing the country can be explained by those findings.

The Critical Role of the Middle Class

Social mobility and transitions between the different social classes are a natural feature of healthy communities. Many sociologists and political theorists such as Max Weber and Karl Marx closely studied the phenomenon of social mobility and its direct social, economic, and political impacts. More than 2,500 years ago, Aristotle also pointed out the conflicts that could occur between the rich and the poor, and he identified the middle class as the mediator with the ability to diffuse this friction.

The concept of “social class” is a fundamental one in sociology. The Encyclopaedia Britannica defines social class as “a group of people within a society who possess the same socioeconomic status.”1 Despite this definition, there is no clear consensus among experts on what this concept truly represents or the criteria that define and identify each social class. In this paper, the classic definitions by Karl Marx and Max Weber, who both define social class based purely on economic factors, will be adopted here. This choice is due to the following main reasons:

The Middle Class in Iraq

There is a lack of accurate data on the relative sizes of the different social classes in Iraq, but some things are clear. In his writings about social classes in Iraq, the historian Hanna Batatu describes varying degrees of social mobility between the different classes between 1921 and 1958. This social mobility experienced spurts of significant increase due to various factors including the Great Depression of 1929, the redistributive land policies in 1938, the Second World War, the Jewish mass migration to Israel, and the flow of oil revenues which began in 1952.2

However, according to various different historical studies, the highest degree of social mobility in Iraq occurred after the 14th of July 1958 coup d’état and continued into the early 1980s. It was the nationalisation and redistribution of agricultural land following the coup that led to a clear shrinking of both the upper and lower classes as the middle class grew.3

During the past two decades, the Central Statistical Organisation in Iraq has been collating data from regular family surveys. Based on this data, the change in the percentages of the population belonging to each of the three social classes can be seen in the figure below. It is worth noting that each class has been defined according to its daily income level, as follows:


The international criteria created by international organisations such as the World Bank, United Nations International Children’s Emergency Fund (UNICEF), and the UN Economic and Social Commission for Western Asia (ESCWA) will be used here to arrive at this division – after factoring in the Iraqi dinar/US dollar exchange rate.4

Figure 1 shows dramatic changes to the three social classes in Iraq. While the middle class represented the absolute majority of the population – at 61% in 2007 – it has experienced a significant reduction in the years 2014-2020, down to 30% in 2020. However, as shown in the UNICEF and the World Bank reporting, estimates indicate that the lower class expanded steadily during the same period. It represented less than a quarter of Iraqis – only 22.8%, in 2007. By July 2020, it almost tripled in only 13 years to around 60% (noting that these numbers take into consideration of the potential negative impacts of the coronavirus pandemic on Iraq). The percentage of Iraqis in the upper class has also significantly decreased – dropping from 16% in 2007 to only 10% in 2020.5 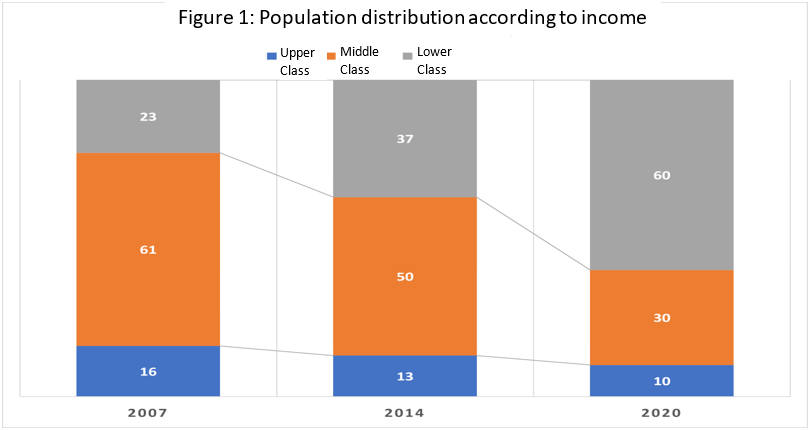 This clear downward shift in the size of both the upper and middle classes has resulted in the unhealthy transformation of the income pyramid shown in Figure 2, which has produced a major impact on Iraqi stability, the rise of extremism, and its ethnic and sectarian tensions. It is widely accepted that the more the income pyramid assumes the shape of a regular pyramid, the higher the chances of social and political unrest. A more stable social life and better economic growth levels are only achieved as the middle class widens, and the size of the upper and lower classes shrinks. 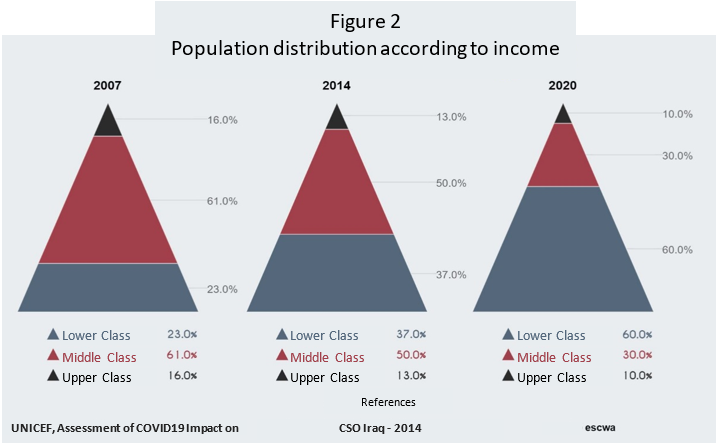 Rising Poverty and Struggling to Survive

UNICEF’s report on the potential consequences of the coronavirus pandemic on Iraqi income levels estimates an increase in the percentage of extreme poverty by 11.5-13.4% in 2020 that will reach approximately 32%. This compares with 20% in 2018. It means that a further 4.2 million Iraqis will fall below the poverty line – bringing the total number of Iraqis experiencing poverty to about 11.5 million, with most working in the private sector or unemployed. It is worth noting that the levels of poverty are much higher in the northern-most Arab governorates as well as the most southern, largely Shia governorates.

The same UNICEF report expects an increase in the “struggling to survive” group. Most of this group work in informal sectors and, while already suffering from low incomes, are struggling to avoid falling below the poverty line. They represent around 30% of the total population and over 40% living in the northern Arab governorates and in the south.6 The central region of Iraq is least affected by this drop in incomes.

This severe erosion in the middle class and surge in the lower class is almost certain to be accompanied by a range of negative social, political, and cultural manifestations. It will increase the probability of socio-political conflict and reduce economic investment.

If the middle class and those struggling to join it see their incomes stagnate or fall, they are less likely to support the economic and regulatory policies that over time increase the size of the overall economic pie. Instead, they are likely to embrace short-term, populist measures they believe will help them retain their gains and meet their raised expectations.”7

As an example, there is a significant increase in the intensity of populist rhetoric in Iraq. Populist leaders are now received with approval across different sectors of society. This phenomenon is not unique to Iraq. During the 2001 Thai elections, researchers noticed a direct relationship between the victory of populists and the level of absolute poverty8. In addition, responses to opinion surveys carried out by Iraqi research firm during recent years show a clear decrease in tolerance accompanying the increase in poverty rates and the erosion of the middle class, as seen in Figure 3.9 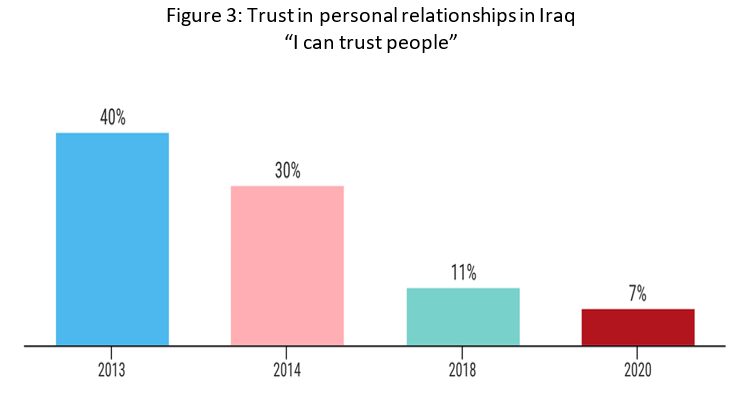 It is logical to assume that the increase in poverty will also lead to an increased feeling of marginalization and, therefore, the potential for violence. Given the country’s rich natural resources, Iraqis believe they are entitled to its wealth. These high expectations lead to feelings of relative deprivation that positively correlate with levels of discontent and expected violence.

These shifts help explain the reasons behind the revolt which has been ongoing since October 2019.10 An examination of the daily violence levels in Iraq shows a rise in the streets and cities in recent years. Recent polls conducted in Iraq showed that 85% of those who participated in the October 2019 uprising were from the lower and lower-middle class. Another indicator of the impact from the erosion in incomes and the rise in sentiments of relative deprivation is the increase in the number and influence of armed groups and tribes.

During recent years, Iraq has experienced a clear change in the structure of its social classes. Despite the great leap in oil production and revenues in the fifteen years prior to the coronavirus pandemic, a marked erosion in Iraq’s middle class has occurred and has been accompanied by a great surge in poverty levels.

Anthony Cordesman recently explained three critical structural problems in Iraq: politics and governance, the economy, and security – labelling them the “three ghosts” that threaten the country’s current position.11 The compounded effect of the war against terrorism with the challenges presented by these three ghosts on the capabilities of the Iraqi state has a huge role in turning the Iraqi oil revenue into a curse rather than a blessing.

The shrinkage of both the upper and middle classes and the growth of the lower class has increased the likelihood of socio-political conflict in a country already suffering from its fragile institutions and the lack of confidence in their governing capabilities. It is therefore highly likely in the future months to witness an increase in socio-economic tensions and even in security threats.

Other polls show that 84% of those who are in the lower or middle-lower income strata stated that they are most-likely or likely to participate in next round of protests when it happens. It would not be surprising to see the current popular uprising extending to reach Sunni and Kurdish governorates, especially since the economic suffering has been distributed evenly among all ethnic and sectarian groups in Iraq. According to recent public opinion surveys, the top three concerns of Iraqis – whether in Kurdistan or in the Arab areas – are unemployment, corruption, and poverty.

All of this may be exacerbated by the full impact of the socio-economic consequences of the coronavirus pandemic that is yet to peak. Iraq is still free-falling towards rock bottom.

For the first time since its formation in 1921, the Iraqi state finds itself unable to pay the public-sector employees and pensioners. Surpassing eight million Iraqis, their salaries have drained all the state’s oil and non-oil revenues.

Most of those still in the middle class are state employees. The estimates from UNICEF point to an expected increase in prices of food products by up to 20%. This would drain the income of many of those employees, resulting in a larger number of Iraqis falling prey to poverty.12

The development crisis in Iraq proves yet again, as was proven in many other countries, that the economy is dependent on politics. Therefore, we cannot expect any improvement in the level of economic growth as long as there is no change to the failing and ineffective policies pertaining to governance, security, corruption, bureaucracy, social justice and political participation. In short, Iraq is in dire need of a complete political institutional overhaul to enable it to rectify its socio-economic crises.

This commentary, entitled, Iraqi Stability and Its Free-Falling Middle Class, is available for download at https://csis-website-prod.s3.amazonaws.com/s3fs-public/publication/201021_Dagher_Iraq_Social_Classes.pdf

Biography of the author:

Dr. Munqith Dagher is the CEO and founder of IIACSS research group (Al Mustakillah) in Iraq and a Gallup International board member. He conducted Iraq’s first-ever public opinion poll in 2003. Munqith holds a Ph.D. in Public Administration and a Master’s degree in War Sciences. He was professor of public administration and strategic management in Baghdad, Basrah and at the National Defense University.

Middle East , The Gulf , Defense and Security , Defense Strategy and Capabilities , and Geopolitics and International Security