Israel and the Palestinians: From the Two-State Solution to Five Failed “States”


The latest round of fighting between Israel and the Palestinians has been a tragic reminder of how deep the gap remains between each side in finding a path to some stable form of peace. The Burke Chair has expanded its original analysis of the current Israeli-Palestinian conflict into an e-book length study of the history and recent events that led to the fighting, which includes a political and military timeline of the fighting by day, entitled Israel and the Palestinians: From the Two-State Solution to Five Failed “States.” A copy is attached to this email, and the analysis is available on the CSIS website for download at https://csis-website-prod.s3.amazonaws.com/s3fs-public/publication/210517_Cordesman_Solution_States.pdf?EygUQsgAeqLPBwndELu_Tkpv86GxSdUA.

It goes into far more depth than the original version, and it attempts to analyze the political, military, civil, economic, and religious forces that divided Israel and each major aspect of the Palestinian movement in depth. Its structure and contents are summarized in the table of contents shown below.

The analysis does not attempt to assign blame to any of the different sides and factions involved, and it focuses on the reality that many modern conflicts involve asymmetric combat between modern states and not-state actors that rely on the use of civil populations to provide the equivalent of human shields.

It does examine the extent to which Israel uses its military power and power as a state to both control its different Palestinian populations as well as the different threats it faces in the West Bank and Gaza, along with the human and economic consequences – relying heavily on reporting by the U.S. State Department, World Bank, and neutral research centers where possible.

It also examines the demographic trends involve in detail, key military aspects of the recent fighting, and the internal friction between different Israeli and Palestinian factions as a source of conflict. In doing so, it links the events in the timeline of the conflict to the broader impact of decades of tension and conflict on each population and the current very different levels of Israeli and Palestinian economic development and human rights.

The analysis shows that Israel has reacted by placing far more emphasis on security measures and the use of force than on the peace process and improving the living conditions and economic security of the Palestinians. It has emphasized the creation of a “Jewish state” over a peace settlement, and it has encouraged the expansion of settlements in the West Bank area, Jewish areas in Jerusalem, and the use of “facts on the ground” as a substitute for peace.

The Palestinians, however, have divided and done equally little to move towards a settlement and a stable peace. The Intifadas, lesser forms of violence, and the division of the Palestinian movement into a steadily weaker Palestinian Authority “government” in the West Bank, a Hamas “government,” as well as a major military build-up in Gaza have all been a matching cause of the collapse for any prospects for a real two-state solution, including Israel’s treatment of Gaza, creeping annexations and facts on the ground, and shifts towards making Israel a Jewish state.

The end result is a situation where there now are at least three equivalents of “failed states” that divide the two sides in a practical sense, and to some extent five. Each represents a separate center of divisions and tensions both between Israel and the Palestinians – and within each side. Each is a center of actions and tensions  that may well block any lasting functional settlement between Israeli Jews and the Palestinians indefinitely into the future.


The end result is the tragedy that has played out in the violent upheavals and fighting that took place in May 2021, which could resume at any time. Each “state” – or center of the tensions between Israel and the Palestinians – seems likely to interact with the other sources of tension and violence in the region – sources which vary from chaos and collapse in Lebanon, civil war and state terrorism in Syria, instability in Jordan, ethnic and sectarian tensions in Iraq, and Egypt’s uncertain stability and development. And, each can further interact with Iranian and Turkish efforts to expand their regional role as well as the competition for regional influence between the U.S., Russia, and China. While principal barriers to any real and lasting peace settlement seem likely to remain dominated by Israel and the Palestinian factions, this is the Middle East.

It is all too clear from this analysis on the scale of the military, security, civil, and economic problems on all sides that even seemingly successful efforts to end the current fighting may not lead to more than a pause in further violence. It is also clear that no settlement is likely to last that ignores the fact that the two-state solution has so far failed because both sides can sometimes agree on a concept but can never agree on effective practical action.

Lasting success can only come from creating – and then actually implementing – a credible plan to deal with all of the key issues that now divided Israeli Jews and Palestinians, that end the asymmetric arms race between Israel and Hamas, that focus on development and human progress, and that give all Palestinians hope for a better life and real equality – if not a formal capitol in Jerusalem and prospect of a separate state.

“Facts on the ground,” and time alone cannot be the answer, and so far, optimism and good intentions have done little more than help pave the road to hell. Fully implementing a pragmatic, working solution, and creating the kind of Israeli-Palestinian political structure, patterns of social interaction, and economic progress needed on the Palestinian side will take at least five years and probably ten – if it is possible at all. It will cost billions of dollars in aid each year and constant outside support and encouragement.

One should never give up hope, but history warns that the “no solution” solution  to the present crisis  seems likely to be the most probable real-world outcome of the violent tragedy in May 2021. 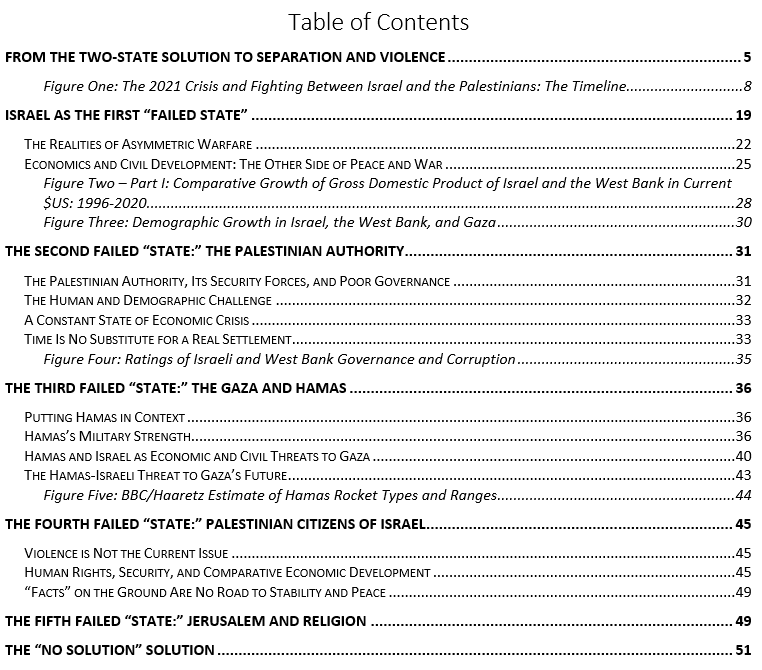