It’s the Game of the Name: The Bumpy Road to the Republic of North Macedonia

Commentary by Heather A. Conley and Matthew Melino

On June 17, breaking a 27-year deadlock that has plagued bilateral relations and stalled Macedonia’s integration into the European Union and NATO, Greek Prime Minister Alexis Tsipras and his counterpart Prime Minister Zoran Zaev announced an agreement to change the name of the Former Yugoslav Republic of Macedonia (FYROM) to the Republic of North Macedonia (Severna Makedonija in Macedonian).

Despite this formal breakthrough, there will be a long and bumpy road to achieve domestic approval for the new name in both Skopje and Athens.

The name dispute dates to the collapse of Yugoslavia in 1991 when, after declaring its independence, Skopje adopted the name Macedonia. The decision was quickly rejected by Greece, which has a northern province named Macedonia (and the birthplace of Alexander the Great), because Athens feared that the new republic harbored greater territorial ambitions. To mitigate tensions between the neighbors, and to gain recognition as well as entry into the United Nations, the interim name of the country became the Former Yugoslav Republic of Macedonia (FYROM). Despite the temporary resolution, tensions between the two nations increased, particularly during the tenure of former FYROM Prime Minister Nikola Gruevski (2006–2016), then leader of the Internal Macedonian Revolutionary Organization-Democratic Party (VMRO-DPMNE). Gruevski built statues to and highlighted symbols of Alexander the Great, which further heightened Greek fears of greater nationalistic ambitions which ultimately led to Greece blocking FYROM’s integration into NATO and the EU.

However, with the 2017 election of a new social democratic prime minister, Zoran Zaev, movement on the name dispute seemed possible. Statues and symbols in Skopje were removed and bilateral negotiations with Athens were initiated, with helpful American behind-the-scenes diplomatic support, culminating in the June 17 breakthrough.

And That Was the Easy Part… A Complicated Process Unfolds

Although there was nothing easy about agreeing to a new name, it will certainly seem like the most straightforward part of a complex process that must be completed by the end of 2018. First, Skopje must have its 120-member parliament approve the new name. It did so on June 20 by a vote of 69 to 40, with all members of the social democratic party supporting the new name while the members of VMRO-DPMNE boycotted the vote. The bill went to the president, Gjorge Ivanov, a member of VRMO-DPMNE, who refused to sign the law forcing it to return to the parliament for a second vote, which occurred on July 5. It received the same level of support and the bill returned to President Ivanov for signature. While the president can delay his signature, the second successful vote requires him to sign the legislation amending the name of the country. Once this occurs, step one of the process will be accomplished.

Step two, Skopje must amend its constitution to incorporate its new name. This process begins with holding a nationwide referendum on either September 23 or October 7. The State Electoral Commission will oversee the referendum, and determine the referendum question and final date of the referendum. Before it can begin its work, the main political parties must submit names to be appointed to the State Electoral Commission. Opposition parties have delayed this process as well, but a successful parliamentary procedure allowed the requirement for the appointment of the electoral commission to be reduced from a two-thirds majority to only a simple majority of 61 out of 120 MPs. It is hoped that a referendum date, the wording of the referendum question, and the nature of the referendum—specifically whether it is binding or consultative—will be agreed to by Friday. Prime Minister Zaev has said the referendum will be consultative, and the outcome will be final and mandatory. For the referendum to succeed, it must be supported by a majority of voters.

Should the referendum be successful, the parliament will formally change its constitution by the end of the year.

After FYROM has ratified the agreement and changed its constitution, step three will begin in Athens where the new name will be voted on in the Greek parliament. 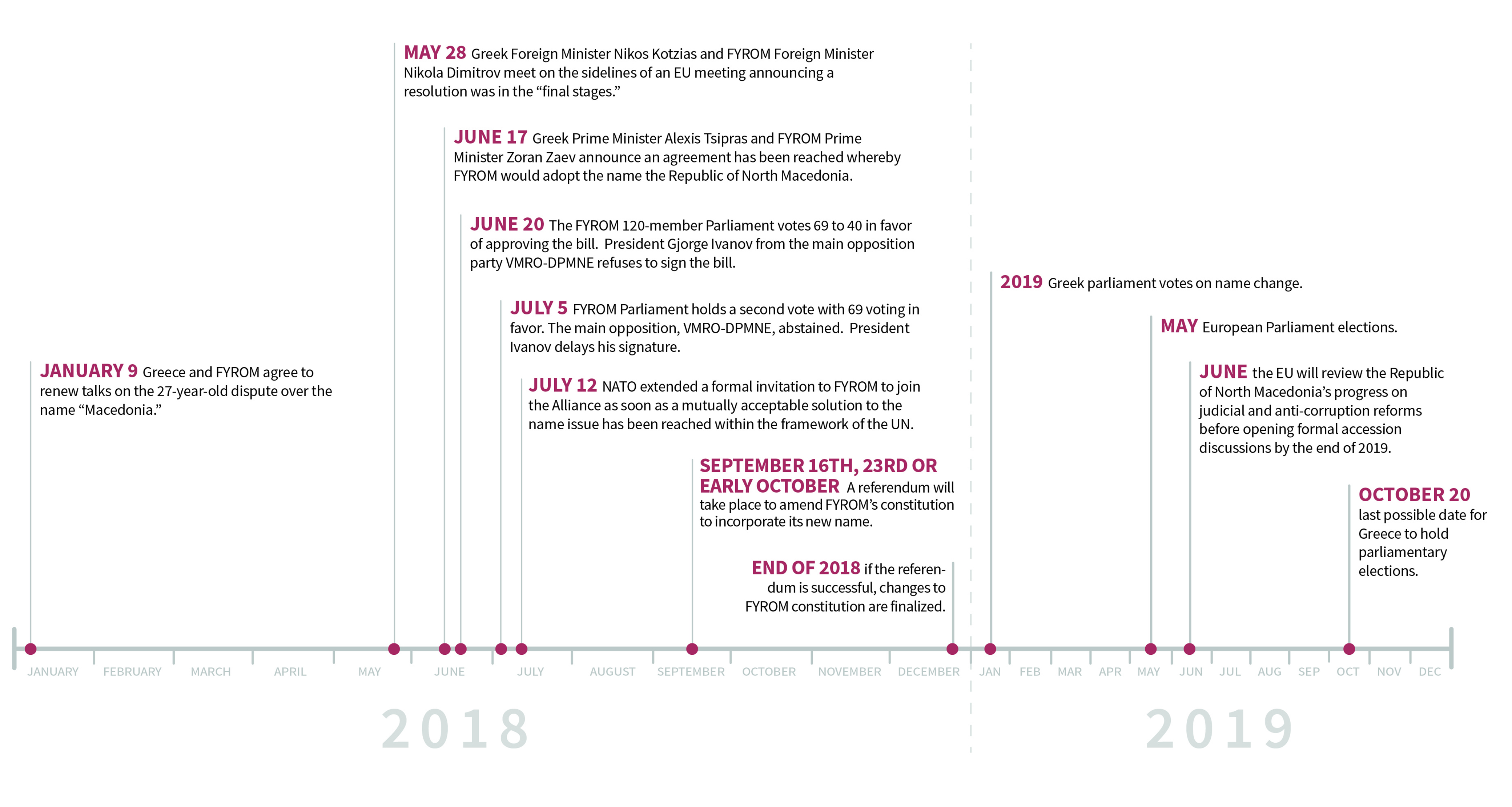 The run-up to and the actual holding of the referendum in FYROM is going to be fraught. Prime Minister Zaev was elected with a slim majority. The formation of a center-left government had to be carefully negotiated (again with helpful American diplomatic support) following a two-year political crisis stemming from a corruption scandal linked to former Prime Minister Gruevski, which culminated in a violent attack in parliament. Political tensions have been running high in the country ever since, and the announcement of the name deal with Greece has emboldened VMRO-DPMNE and other nationalist forces. VMRO-DPMNE actively opposes this deal and is mobilizing support against the bill prior to the referendum. Earlier this month, the party hosted a rally in the capital of Skopje in which thousands of opposition supporters voiced their objection to the name change. During the demonstrations, the opposition called for early elections in either March or April of next year.

Prime Minister Tsipras also faces political and public opposition in Greece. During earlier negotiating rounds, large demonstrations against a settlement were frequent. In January, an estimated 90,000 people rallied in the northern Greek province and second-largest Greek city, Thessaloniki. Less than a month later, more than 100,000 people from across Greece protested in Athens’s main square. Greek opposition leader Kyriakos Mitsotakis, of the New Democracy Party, opposes the deal (he is currently leading in Greek opinion polls), arguing that it is “in conflict with the majority of the Greek people.” Moreover, there is disagreement within the current Greek coalition government as the nationalistic Independent Greeks party also opposes the agreement. New Democracy put forward a no-confidence motion on June 16, which failed 153 to 127. Greece is slated to hold elections on or before October 20, 2019.

Two ambitious political leaders are having a carpe diem moment. Greek Prime Minister Tspiras, as Greece exits its third international financial bailout in August, seeks the mantle of a historic leader that not only ended Greece’s bondage to its creditors but opened a new historic chapter in friendly relations with its neighbors. Prime Minister Tsipras hopes these historical moments serve him well when Greeks go to the ballot box.

For Prime Minister Zaev, Macedonia’s integration with the European Union and NATO have been delayed for far too long, which has set Macedonia back in its development. It is vital for his government to take immediate and meaningful steps to advance membership to both organizations. He was rewarded on July 12, when NATO formally invited the government “to begin accession talks to join” NATO on the condition that there is full implementation of all the processes to officially change the country’s name. Unfortunately, the road to EU integration has been delayed by a year. Although a late June EU General Affairs Council meeting resulted in a majority of EU members supporting the opening of accession talks for Macedonia, France, the Netherlands, and Denmark did not support this position. Macedonia must continue its reform path with the hope that accession talks can begin in or after June 2019, following the European Parliament elections. EU Enlargement Commissioner Johannes Hahn visited Skopje on July 17 to begin this assessment.

The Western Balkans is rising in importance on the transatlantic foreign and security policy agenda for both positive and negative reasons. The breakthrough on June 17 was a great positive for the region as was the May EU-Western Balkans Summit, the first since 2003. Quiet and persistent U.S. diplomacy—in both the Obama and Trump administrations—has made a significant difference. It is also encouraging that the EU’s newly proposed Multi-Annual Financial Framework (MFF) covering 2021 to 2027 sees a significant increase in funds planned for pre-accession assistance to the Western Balkans as well as funds to manage migration.

But more worrisome, the Western Balkans is also rising on the Kremlin’s agenda. There is particular concern that malign Russian influence will target the upcoming referendum to prevent Macedonia’s NATO and EU integration as it dramatically attempted to derail Montenegro’s NATO membership in October 2016 by using nationalistic forces to stage an attempted coup. In fact, there is already evidence that Russian activities are well underway in this regard. On July 11, Greece took the extraordinary step of expelling two Russian diplomats and banned two other officials from entering Greece on the grounds that they were interfering in Greece domestically (allegations of attempting to bribe a Greek official) to prevent acceptance of North Macedonia and its future in NATO. Russian Foreign Minister Sergei Lavrov responded by cancelling a visit to Athens in September. The U.S. Supreme Allied Commander in Europe Gen. Curtis Scaparrotti has presciently warned that the Western Balkans could become the next contested space between Russia and the West, stating that “the area I’m most concerned about today is the Balkans... Russia is at work in the Balkans and we have kind of taken our eye off the area... that is an area we could have problems with in the future.” There is also growing concern about China’s expanding economic influence in the region, as evidenced by the recent 16+1 meeting in Bulgaria, which seeks to make end runs around EU regulations and transparency.

While there is much to celebrate about where we are today on the name issue, there must be continued focus and diplomatic engagement to prevent malign forces from upending the positive. Once again, the Western Balkans is producing more history (and intrigue) than it can consume.

Heather A. Conley is senior vice president for Europe, Eurasia, and the Arctic and director of the Europe Program at the Center for Strategic and International Studies (CSIS) in Washington, D.C. Matthew Melino is a research associate with the CSIS Europe Program.