On March 3, the Japan External Trade Organization (JETRO) released the results of its 14th annual Survey on the International Operations of Japanese Firms. The survey results for FY2015 provide a new look at the perspectives of Japanese firms on topics such as trade, overseas business development plans, free trade agreements, and so on. 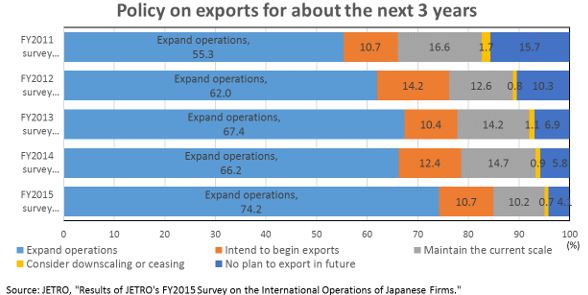 Almost 75 percent of Japanese firms expressed interest in expanding exports, the highest percentage since before 2011 and a nearly 10 percentage point increase over last year’s results. If the roughly 11 percent of firms that indicated they soon intend to begin exporting are also included, the percentage of Japanese firms with a direct interest in accessing markets abroad rises to nearly 85 percent. Over 70 percent of firms surveyed indicated that increased global demand was a reason for their interest in exporting. This is despite sluggish global growth and an ongoing slowdown in exports to China.

Among the firms surveyed, which included over 2,000 small and medium-sized enterprises, the highest export destination is still China; over 60 percent of Japanese export firms surveyed responded that they export to China. However, export volume from Japan to China between January and September 2015 decreased 4.5 percent from the same period last year. When asked why exports have slowed to China, 41.1 percent of surveyed firms pointed to reduced Chinese demand, with the country’s economic downturn especially evident in the responses of Japanese firms from industrial sectors such as general machinery (53.4 percent), iron steel/nonferrous metals/metal products (53.3 percent), and cars/car parts/other transportation machinery (53.3 percent).

By comparison, firms from consumer products sectors reported more favorable prospects in the Chinese market: more than half of medical products and cosmetics firms surveyed saw no decrease in demand, as did almost 40 percent of firms from the food and beverages sector. This is consistent with arguments made by senior Chinese policymakers, such as People’s Bank of China deputy governor Yi Gang, who have emphasized that China is already transitioning from a heavy industry and export-oriented economy to a consumer-driven economy. According to official Chinese statistics, domestic consumption contributed almost two-thirds of China’s GDP growth in 2015, and the service sector share of total GDP exceeded 50 percent.

China Is Highest Investment Destination, but Increased Interest in the United States Is Notable

China is also the highest among investment destinations cited by Japanese firms intending to expand business overseas, followed by Thailand. The percentage of Japanese firms reporting that they would “expand business” in China is over 50 percent and over 40 percent in Thailand. China and Thailand continue to rank first and second place, although the percentage of those top two countries decreased from the previous years.

The survey data also highlighted business environment issues Japanese firms are facing in emerging countries. As noted above, China and Thailand ranked first and second, respectively, as destinations for foreign investment, but firms active in those countries also identified labor issues as a major challenge. When asked to identify issues affecting the local business environment, the percentage of firms responding “increased or increasing personnel costs” was 50.7 percent in China and 27.2 percent in Thailand. The percentage responding “labor shortage or difficulty in recruitment” was also high in China (13.9 percent) and Thailand (18.6 percent) compared to other emerging countries. Another JETRO survey, the 2015 Survey on Business Conditions of Japanese Companies in Asia and Oceania, [2] revealed that the base monthly salary for manufacturing workers in China is $424 and $348 in Thailand. These are higher than other emerging countries in Asia such as the Philippines ($262), Indonesia ($178), and Vietnam ($185). China also topped the list for “undeveloped legal system” (39.8 percent), complexity of administrative procedures (35.1 percent), “problems in protection of intellectual property rights” (49 percent), and “environmental pollution problems” (21 percent). India was considered most cumbersome with respect to taxation systems (26.4 percent), and Myanmar had the least adequate infrastructure (53.2 percent).

Many Japanese Firms Considering the Possibility of Utilizing TPP

In addition to the results discussed above, the survey presents the perspectives of Japanese firms on topics such as management localization at overseas bases (transfer of power, employment of local staff, etc.), utilization of foreign personnel, and corporate social responsibility policies. To read the English summary please click here; to read the full report please click here.

Hirohisa Akahira is a visiting fellow with the CSIS Japan Chair from JETRO .