Japan’s Coal Policy Updates—A Glass Half Full or Half Empty?

Japan’s relationship with coal-fired power generation is once again under scrutiny following two key announcements by the Japanese government in July meant to curtail both its domestic reliance on coal as well as its export of coal-fired power generation technology abroad. Is coal’s role as an important source of low-cost, energy-secure fuel in Japan coming to an end? A closer look at the policy details suggests neither of the announcements signify a radical departure from Japan’s existing coal policy.

In early July, the minister for economy, trade and industry (METI) announced that Japan was considering concrete measures to facilitate the retirement (mothballing or decommissioning) of coal-fired power generation units that use subcritical and supercritical technologies. Today, coal makes up 32 percent of Japan’s power generation mix. The announced action would likely affect approximately half the coal-fired power supply (see chart below). 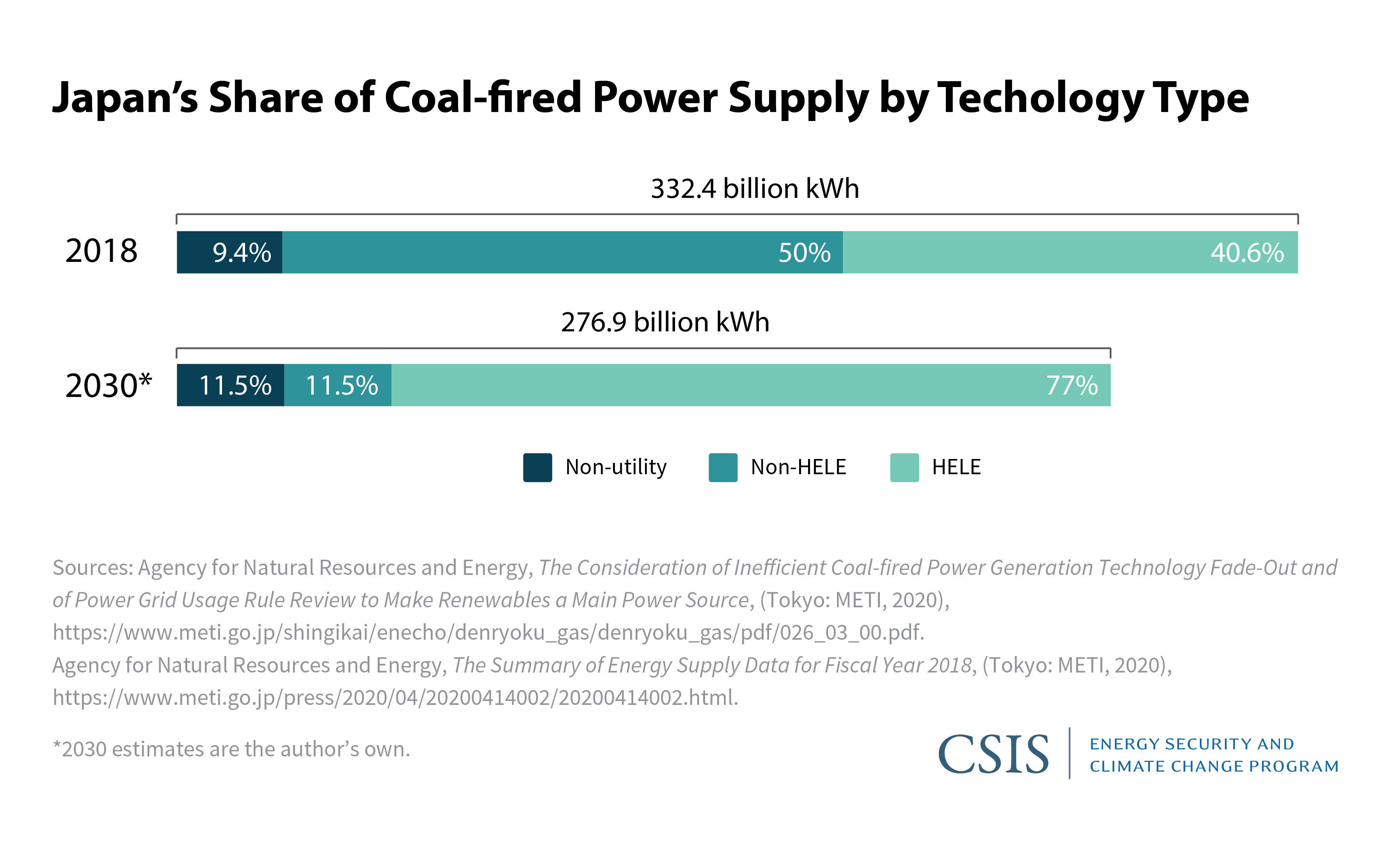 In truth, this announcement is in alignment with the Japanese government’s already stated goal to reduce its reliance on coal-fired power generation to 26 percent in 2030 and a key step in its triennial updating of its strategic energy plan, due in 2021. Also, the country’s coal-fired power fleet in 2030 is to become less emission intensive as higher-efficiency, lower-emission (HELE) coal-fired power plants would make up roughly three-quarters of the fleet after about a dozen new HELE units come online. However, the policy announcement shows that Japan is not necessarily wavering in its decarbonization plans even though it faces energy economic uncertainties, including the Covid-19-induced economic contraction as well as the market volatility for oil and gas for which the country is entirely import dependent. The coal reduction plan comes in tandem with the country’s plan to expand the share of renewable energy to 22-24 percent of its power supply mix in 2030, up from 17 percent in 2018—the year that Japan saw a threefold expansion of its non-hydro, renewable power supply from 2012.

One week after METI’s statement on domestic coal, the minister for the environment announced that the Japanese government as a rule would no longer support coal plant exports. The revised coal export policy does however continue to allow HELE exports in a case where—in accordance with the rules of the Organisation of Economic Co-operation and Development—a country without other reasonable options for energy sources makes an official request to the Japanese government. While the policy revision may not be major, its consequence could be notable. The additional conditions on the coal export policy could effectively close a market opportunity for Japanese HELE exports. For example, the revised policy requires significant Japanese involvement in the recipient country’s energy and decarbonization policymaking, such as assistance in formulating their energy and decarbonization plans—a condition that may make a transaction with Japan politically inexpedient (or intrusive). Additionally, Japan will limit its coal export support to ultra-supercritical coal-fired power plants with generation efficiency of 43 percent or above or projects that reduce CO2 emissions to a level below integrated coal gasification combined cycle (IGCC)—technical thresholds so high that correspondingly high price tags may turn away potential buyers.

Japan appears to continue taking an incremental approach to shifting its energy system toward a lower-carbon system. On the domestic front, whether the country could maintain its 2030 power mix goals warrants close attention in light of the prolonged delay in restarting nuclear power plants across the country. Under the strategic energy plan, the share of nuclear in the power supply mix is to grow from 6 percent in 2018 to 20-22 percent in 2030. As of mid-July, only one-quarter of the nuclear power generation fleet (or nine units) are back online. Would the nuclear restart delay complicate the coal-fired power phase-out, propel the increase of renewables and natural gas targets, or both? On the international front, the implications of the export policy revision are highly uncertain for both developing economies and Japan’s power equipment manufacturers as well as technology developers. The updated policy actively promotes “low-carbon infrastructure exports,” committing Japan to proposing power options, such as renewables, hydrogen, carbon recycling, and energy management technologies—over coal-fired power generation—in meeting a country’s energy needs. Whether the approach could help facilitate the introduction of lower-carbon power generation technologies in the developing economies, as well as how competitive Japanese manufacturers may be in this market, remains to be seen.

Jane Nakano is a senior fellow in the Energy Security and Climate Change Program at the Center for Strategic and International Studies (CSIS) in Washington, D.C.

Asia , Japan , and Energy and Sustainability