This commentary is part of the Just Transition Initiative, a partnership between the CSIS Energy Security and Climate Change Program and the Climate Investment Funds (CIF) to investigate how to achieve just transitions through the transformational change necessary to address climate change.

CSIS and the CIF recently held a second workshop to discuss just transitions—an approach that seeks to ensure workers and communities are both protected and benefit from the deep and rapid changes to come in the transition to a new climate economy. Experts discussed case studies from countries where just transitions approaches are advancing and shared ongoing research and lessons learned that can further inform the next phases of the Just Transition Initiative.

There is a growing body of research on just transitions, but case studies tend to focus on developed economies. More case studies on sub-Saharan Africa, developing Asia, and Latin America would help illuminate how to achieve just transitions in countries with particularly vulnerable populations, fewer economic resources, and more limited social safety nets. Case studies can also deliver deeper insights on issues such as planning processes, financing options, and impact assessments in all regions (see the summary below). 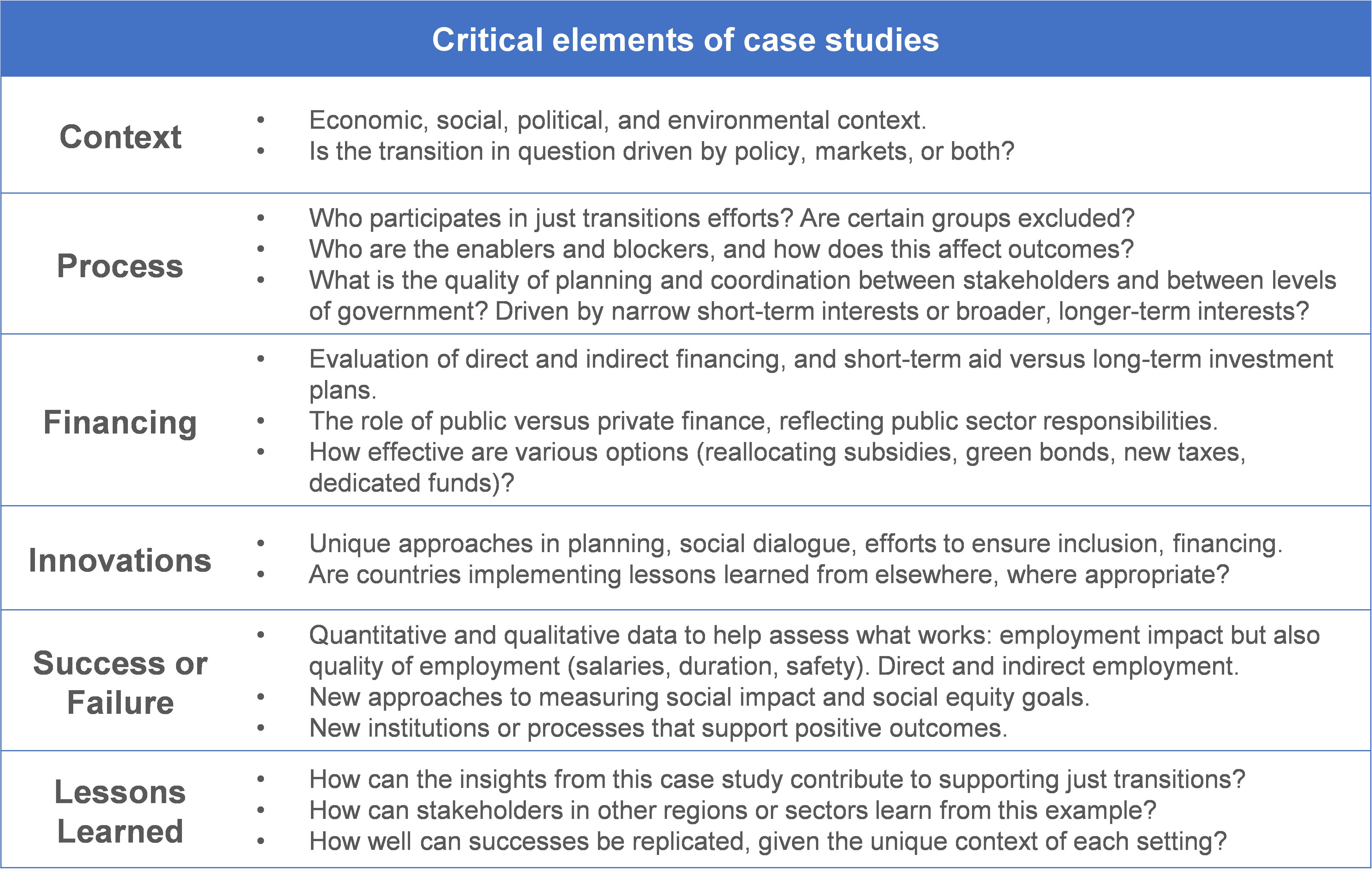 The first discussion focused on South Africa, where the need for just transitions is especially urgent, driven in part by the country’s reliance on coal. Accounting for about 89 percent of South Africa’s electricity generation and 74 percent of its total primary energy supply, coal has been a critical part of South Africa’s economy for decades. It provides inexpensive inputs for electricity generation, an important source of export revenue, and employment for some 200,000 people through mining, power stations, and transport. But the environmental impact has been significant. The country’s carbon dioxide emissions per capita in 2017 were the tenth-highest in the world.

Market and policy signals indicate an inevitable decline of the coal sector, but a transition from coal presents numerous economic, social, and political challenges. Coal mining and coal power generation are heavily concentrated in four municipalities of a single province, Mpumalanga, where the industry is critical to workers and the broader community. Unemployment in South Africa reached 30 percent in the first quarter of this year, so any program that has the potential to lead to job losses is likely to trigger concern and a strong response from influential coal-linked unions. Meanwhile, the state-owned power company Eskom continues to struggle with financial and management issues that have contributed to increased costs, high emissions, and frequent load shedding, all while 2.2 million households still lack access to power. Yet many trade unions, including the National Union of Metal Workers of South Africa (NUMSA), criticize efforts to increase the role of privately owned independent power producers.

One commentator in the workshop emphasized the need for just transitions efforts to address South Africa’s socioeconomic realities, especially issues of racial justice. He emphasized that black communities currently carry disproportionate negative externalities from business-as-usual policies in the energy sector, and many lack access to basic public goods such as water and electricity. But policies that elevate renewable energy—while failing to support local ownership and socioeconomic transformation—are unlikely to address these underlying issues. The high concentration of coal mines and power stations in one region of South Africa provides an opportunity to support economic diversification in ways that create environmental, social, and economic benefits and thus unlock support for a transition to a low-carbon, resource-efficient, and inclusive economy.

Speakers and commentators in the workshop suggested that the just transitions discourse needs to address issues of inclusivity, power relations, and the allocation of benefits and harms related to energy production, ownership, and distribution. The dialogue on just transitions should also broaden beyond the energy sector to include the allocation of water, access to land, mobility, and equitable food systems.

In terms of planning for a just transition from coal, one speaker emphasized the need for cross-sectoral dialogue, including the recognition and participation of all affected groups. This requires both local-level engagement and national-level dialogue and action.

The pace of technological change as well as more ambitious climate policies are accelerating threats to coal in Central and Eastern Europe, making it all the more urgent for countries to plan ahead rather than wait for a crisis to occur. Numerous countries in this region anticipate phasing out coal in the coming decades, and the recently introduced European Green Deal and the Just Transition Mechanism are increasing attention on just transition efforts.

A cross-country comparison shows variations in approach. Slovakia aims to phase out coal-fired electricity generation by 2023 and has signed on to the Powering Past Coal Alliance. An action plan for the country’s coal-producing Upper Nitra region was cited as an effective bottom-up approach since it enjoyed strong support from local officials. The Czech Republic, where coal accounted for half of power generation capacity in 2018, has formed a government commission to phase out coal and created an office to chart future development plans for coal-producing regions. The European Commission has praised the Czech Republic’s “RE:START” strategy, which created a governance structure combining national planning with representation and input from affected regions. Still, one participant suggested more could be done to ensure sufficient input from the local level.

Active participation at the local level is critical for just transitions. One participant noted, however, that just transitions efforts involving mayors, environmental groups, philanthropists, and civil society run the risk of disrupting well-established social dialogue mechanisms between companies, workers, and governments. This discussion prompted questions over why some civil society groups and environmental constituencies believe other avenues aside from social dialogue are needed, or why they do not always feel included in more formal social dialogue mechanisms. Last, workshop participants noted the need for just transitions to consider other sectors aside from coal, including emissions-intensive heavy industry and the automotive sector.

As the Just Transition Initiative enters its next phase of research, we are compiling a library of public resources on just transitions, including numerous case studies. Our final research paper and a public event this fall will incorporate lessons learned from our literature review as well as discussions with experts over the past few months. We will suggest policy tools and strategies that can help to achieve just transitions, including a focus on distributional impacts and the role of place-based investment.

This publication was written by the Just Transition Initiative team, a collaborative effort by CSIS and CIF.

This project is made possible by support from Climate Investment Funds.