A Kinder, Gentler Bear? Why Rumors of Russia’s Post-Soviet Retreat Are Premature

This commentary is the first in what will be an ongoing conversation among CSIS experts on Russia’s evolving economic, foreign, and security policy in post-Soviet Eurasia.

While 2020 has been an annus horribilis pretty much everywhere, it has been particularly challenging across the periphery of the former Soviet Union. In Eastern Europe (Belarus), the South Caucasus (Nagorno-Karabakh), and Central Asia (Kyrgyzstan), 2020 has brought widespread political upheaval and conflict. Amid this wave of instability washing over its periphery, Russia has played what appears to be a rather passive role. Despite many warnings from Western analysts since the 2014 intervention in Ukraine that Russia would take advantage of instability in its periphery as an excuse to its assert domination over its neighbors or even execute a Crimea-style land grab, Moscow has tolerated the activities of rival powers (notably Turkey’s involvement in the Nagorno-Karabakh conflict) while outsourcing much of the dirty work to authorities in Minsk, Yerevan, and Bishkek.

The absence of an aggressive Russian response has led some observers to suggest that Moscow has walked back from its long-standing view of the former Soviet Union as a zone where it maintains what former president Dmitry Medvedev called “privileged interests.” Particularly in Belarus and the South Caucasus, Russia’s approach bears a strong continuity with efforts dating to the 1990s to secure its “privileged interests,” including the maintenance of a leading political and economic role and the exclusion as far as possible of Western influence. Russia has long pursued these objectives through a combination of diplomatic activity backed by political and economic leverage, with the threat of force merely looming in the background.

In fact, Russia has been quite successful in 2020 in using the crises around its periphery to consolidate political and economic influence, even if its methods have been less dramatic than those employed in Ukraine or its 2008 war with Georgia. This ability to secure its interests short of the kind of large-scale intervention that calls forth Western sanctions or other responses is itself evidence of Russia’s still formidable capabilities in its neighborhood.

The “Lessons” of Ukraine

While the annexation of Crimea and intervention in Eastern Ukraine were a watershed, they were also exceptional in the history of Russia’s dealings with its neighbors. During most of the period since the Soviet collapse, Moscow pursued a less expensive and less risky approach to maintaining its “privileged interests,” which it understood largely in terms of preventing the expansion of Western influence. While the threat of force always lingered in the background, Moscow long preferred using political and economic leverage, financial incentives, “strategic corruption,” and other traditional tools of imperial management.

It pursued this approach in Ukraine up until the spring of 2014, when President Viktor Yanukovych’s attempt to violently suppress protests sparked by his decision to comply with Russian demands and abandon a promised association agreement with the European Union escalated into regime collapse and revolution. While Yanukovych was often described in the West as “pro-Russian,” in fact, his geopolitical outlook was less important than the weakness and corruption of his regime that left him beholden to Moscow.

To this day, Russian officials remain upset at what they see as Yanukovych’s weakness in the face of the protests and, ultimately, a loss of nerve that led him to flee Kyiv, a decision that sparked the hasty decision to seize Crimea. Once it became clear Yanukovych’s hold on power was no longer salvageable, Russian participation in talks conducted by European leaders helped convince Yanukovych to sign an agreement paving the way for elections and a gradual handover of power (though the Russian envoy ended up not signing the final agreement).

More than anything it was Yanukovych’s inability to uphold his end of the bargain Moscow imposed on him that prompted Putin, with only a small circle of advisers, to make the decision to intervene militarily. Four days after Yanukovych’s flight, “little green men” began seizing government installations in Crimea.

Belarus and the Ukraine “Model”

In many ways, Russia’s current approach to Belarus resembles what it tried and failed to do in Ukraine in the years leading up to the seizure of Crimea in March 2014. Despite having more spartan tastes than the famously gaudy Yanukovych, current Belarusian president Aleksandr Lukashenko fulfills a similar role for Russia: a leader whose quasi-Soviet outlook, management of Belarus’ unreformed economy, and eroding popular legitimacy leaves him reliant on Russian support.

As with demands that Yanukovych abandon the EU association agreement, Russia today is making Lukashenko an offer it believes he cannot refuse—accept greater political and economic integration with Russia as the price for staying in power in the short run and protection of his and his family’s interests in the future. The conditions accepted by Lukashenko so far include staging joint exercises and accepting the deployment of Russian security forces, “political technologists,” journalists, and other personnel allowing Moscow to gradually consolidate its hold on Belarus’ political life. This process could culminate next year with elections and the adoption of a new constitution that, according to Russian foreign minister Sergey Lavrov, would ensure “transformation of the political, economic, and legal system” in Belarus and pave the way for new elections.

Whether Lukashenko remains in Moscow’s longer-term plans is unclear, but this support for constitutional overhaul suggests that Russia remains committed to strengthening its political and economic grip on Belarus. As in Yanukovych-era Ukraine, though, military force is likely only as a last resort. As long as Lukashenko—unlike Yanukovych—sticks to the script Moscow has given him, the chances of little green men showing up in Belarus are low. Nevertheless, Belarus’ ongoing unrest has given Moscow an opportunity to move ahead with plans for deeper integration first mooted in the 1990s but since left on hold because of Lukashenko’s commitment to guarding Belarusian sovereignty.

Though Armenia is a member of the Russian-sponsored Collective Security Treaty Organization (CSTO), a quasi-alliance whose charter calls on members to provide “collective defense in the event of threats to [members’] security, stability, territorial integrity and sovereignty,” when Azerbaijani forces invaded Armenian-controlled Nagorno-Karabakh in September 2020, Russia’s response remained tepid. Even as Turkey provided open political and military support for Baku, Russia refrained from wading in on the side of Yerevan—emphasizing that its CSTO obligations applied to Armenia’s sovereign territory, but not to Nagorno-Karabakh.

This position was defensible on the basis of the CSTO charter but more importantly reflected the success of Russian diplomacy in the South Caucasus—with Moscow moving on from the role of Armenia’s patron during and after the first Nagorno-Karabakh war (1988-94) to positioning itself as a partner and interlocutor for both sides. The major shift in Russian policy in recent years centers on the improvement of relations with Azerbaijan, which in turn allows Moscow to play a more even-handed role in the conflict. Russia has made political inroads in Baku thanks to lower energy prices and Azerbaijani president Ilham Aliyev’s authoritarian ways, which have tempered Western interest.

With Armenia still within Russia’s sphere of influence thanks not only to its membership in both the CSTO and the Eurasian Economic Union, but also the deployment of Russian troops and a significant Russian economic presence, the improvement of relations between Moscow and Baku allowed Russia to consolidate its position as the conflict’s primary arbiter. During both the four-day conflict that broke out between Armenian and Azerbaijani forces in April 2016 and the wider war this fall, it was Russia that ultimately imposed a cease-fire.

Russia’s reluctance to intervene on behalf of Armenia may have been a source of frustration in Yerevan, but it reflected less a reluctance to bear the burdens of empire than a recognition that it had more to gain from preserving its relationship with both sides. Rather than being drawn into a proxy conflict with Turkey, where Ankara assumed the right to speak on behalf of Azerbaijan, Russia was able to end the war on its own terms. Notably, the agreement allowed Moscow to achieve its long-standing objective of deploying Russian peacekeepers to the region. Russia also preserved its military-political influence in both Baku and Yerevan and succeeded in relegating Turkey to a secondary role, despite the extensive political and military support Ankara provided to Baku throughout the conflict.

The Persistence of (Imperial) Memory

Rumors of Russia’s retreat from its aspiration to maintain a sphere of “privileged interests” in the former Soviet Union are premature. Since the failure of its intervention in Eastern Ukraine, Moscow has become more realistic about the costs and risks associated with this policy and has recalibrated its approach appropriately. It has not moved toward a post-imperial future so much as fallen back on an approach to imperial management much like that which prevailed before 2014. That approach is one dominated by a “logic of appropriateness,” where the tools and risks are proportionate to the extent of the interests involved.

That said, those interests today are not the same as they were before 2014. Of course, Russia’s economy is struggling and relations with the West more fraught. Yet the invasion of Ukraine (coupled with internal crises in both the United States and Europe) have left Washington and Brussels unwilling to challenge Russian red lines, as the cautious handling of the Belarus protests shows. Moldova’s new pro-Western government, for instance, is unlikely to receive much concrete encouragement from the European Union or NATO—a situation Russia can live with.

Rather, it is new challengers like Turkey and China that are most actively testing Russian influence in Eurasia. While relations with Ankara and Beijing are complex, Moscow does not view either as a systemic rival or a threat to its domestic political order. Both Turkey and China, moreover, support Russia’s aspiration to create a more “democratic” (i.e., non-Western-dominated) world order. Some instances of Chinese and, more rarely, Turkish involvement in the region actively align with Russian interests. Russia supports the presence of Chinese troops patrolling remote border regions of Tajikistan for helping to contain the spread of Islamist militants from Afghanistan. Moscow is therefore content to manage the expansion of Chinese and Turkish influence diplomatically, without the neuralgia that attends on its rivalry with the United States and European Union.

At the end of the day though, Russia has shown in both Belarus and Nagorno-Karabakh that it remains the indispensable power in much, if not all, of the former Soviet Union. Moscow’s actions suggest a degree of nuance in Russia’s pursuit of regional influence, rather than the atavistic drive for expansion and domination sometimes portrayed by Western analysts. In 2005, Putin famously said that the Soviet collapse represented the greatest geopolitical disaster of the twentieth century; less remarked on was his later observation that anyone wishing to restore it lacked a brain. As Eurasian geopolitics becomes increasingly complicated by the expansion of Chinese power, growing Turkish assertiveness, and questions about the durability of U.S. commitments, Russia’s ability to adapt and thrive should not be underestimated.

The views expressed in this article are those of the author and are not an official policy or position of the National Defense University, the Department of Defense, or the U.S. government.

Jeffrey Mankoff is senior associate with the Europe, Russia, and Eurasia Program at the Center for Strategic and International Studies in Washington, D.C. 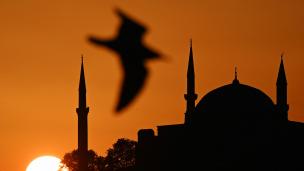 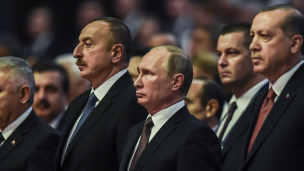