Labor, Environment, and . . . Gender? What the USMCA Could Mean for the Inclusion of Gender in Future U.S. Trade Agreements

This commentary is the second of a four-part series that examines the intersection between trade and gender. Though the term “gender” can encompass a variety of identities, the series will limit its consideration of gender differences to differences between women and men, due to limited data availability and other practical considerations. This installment considers what we can learn from the labor and environment chapters in the United States-Mexico-Canada Agreement (USMCA) to design gender clauses for future agreements. Over the next several months, CSIS will consider three case studies to inform research on existing gendered trade barriers before producing gender-specific model language for policymakers’ use in future trade agreements.

As discussed in the first installment of this commentary series, gender-specific language in trade agreements is rare. Mentions of the unique trade challenges that women face globally—such as gender discrimination in import taxes and reduced access to trade finance—rarely appear. When agreements do include gender provisions, the language is often vague and unenforceable, and seldom requires action. Many countries continue to resist addressing gender in agreements despite findings from the UN Conference on Trade and Development (UNCTAD) that trade policy is not gender neutral. Indeed, data show that trade agreement provisions often have different impacts on women and men and can lead to higher barriers to trade for women.

Though gender provisions that do exist in trade agreements broadly affirm gender equality, advocate for equal pay, and address workplace discrimination against women, more detailed language and obligations can lead to more measurable impacts. These impacts would benefit everyone, not just women. For example, abolishing customs duties, increasing market access, encouraging investment, and supporting women in the workforce can lead to higher employment and GDP, a more highly skilled labor force, and more competitive economic opportunities.

CSIS is conducting research on how best to promote the inclusion of gender commitments in trade negotiations and agreements. In considering the implementation of gender-specific trade language, it is useful to reflect on the treatment of two particular trade topics: labor and environment. Both policy areas have merited their own chapters in trade agreements over the past few decades. In this commentary, we consider how the United States-Mexico-Canada Agreement (USMCA) can inform future agreements’ recognition and treatment of gender disparities. Some of the politics surrounding USMCA negotiations may also foreshadow the political challenges that proposed text on gender could face in the United States.

The first trade agreement to include labor provisions was the 1994 North American Agreement on Labor Cooperation (NAALC), which accompanied the 1992 North American Free Trade Agreement (NAFTA, the precursor to today’s USMCA). Since then, agreements have added stronger labor-specific provisions; referenced key International Labor Organization (ILO) conventions, such as the Declaration on Fundamental Principles and Rights at Work; and subjected labor chapters to dispute settlement.

Notably, the World Trade Organization (WTO) does not maintain its own labor standards. It instead leaves the treatment of labor to the ILO, which lacks robust enforcement mechanisms. As a result, a number of WTO member states have dragged their feet on including labor clauses in their trade agreements. For example, countries that seek to attract foreign investment might benefit from maintaining low labor standards and resist the inclusion of stringent standards in trade agreements. The United States, however, has taken a different approach; in contrast to its agreements’ historical disregard for gender, the country has proven itself a leader in promoting labor rights through free trade agreements (FTAs). All FTAs the United States has signed since 1994 have included labor provisions, a practice that was established through the May 10 Agreement requiring their inclusion and the 2015 Trade Promotion Authority (TPA) requiring their subjection to dispute settlement mechanisms (DSMs).

Despite U.S. leadership on labor rights issues, the inclusion of these provisions in trade agreements does not guarantee they sufficiently address all labor-related issues, especially those that primarily affect women. Most agreements with labor provisions address key worker rights, such as reasonable working hours, occupational safety and health, minimum wage, and the freedom of association and right to organize. However, few condemn forced labor, and even fewer acknowledge labor challenges that disproportionately affect women, who comprise 59 percent of the world’s employment in services. Such challenges are often implicit; for example, an agreement that does not mandate domestic legislation on parental leave or childcare may hinder women’s ability to start their own export businesses, gain employment to pay for trade finance workshops, or network with trade partners relative to men. Failure to address these issues may widen an existing leadership and pay gender gap, which has only worsened during the pandemic. Enforcement of labor obligations has historically been slow and insufficient. For example, the United States has brought only one labor rights case to an FTA’s DSM, in 2010. An arbitral panel was formed in 2012 and, in 2017, failed to recognize labor rights violations the United States alleged against Guatemala. (The panel left no opportunity for appeal.) Absent effective enforcement action, labor and gender obligations, no matter how robust, will have limited impact.

The Evolution of U.S. Labor Provisions in Trade Agreements 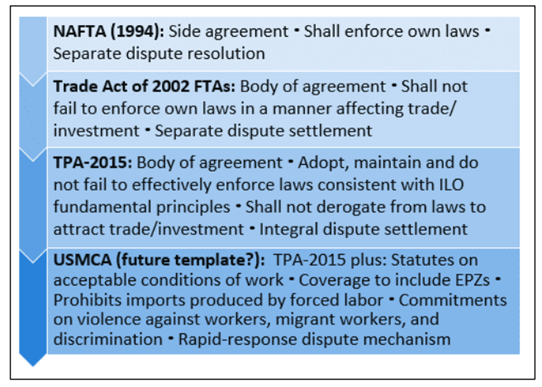