The United States recently announced two aid packages to Ukraine, continuing to dole out the $40 billion of aid appropriated in May. A $775 million package provides U.S. equipment from existing stocks. Several new systems appear in the package, perhaps preparing the Ukrainians for a counteroffensive. The package also contains indicators of trade-offs because the United States is facing inventory shortages. Finally, there is some mystery about whether undisclosed weapons are being provided. The second, much larger $3 billion package procures new equipment and provides training. This will sustain the Ukrainian military over the long term but take months or even years to implement fully.

New systems continually crop up in the aid packages as Ukraine’s needs change and its ability to absorb additional systems increases. This package has several interesting new items.

High-speed anti-radiation missiles (HARM). The package includes these explicitly, but they were apparently included in previous packages. According to a Department of Defense (DOD) spokesperson, the Ukrainians have adapted these U.S. weapons to their Soviet-era MiGs, likely with a lot of U.S. technical help. It is a sensible move because, once the adaptation is made, the required level of maintenance and training is relatively modest, but the capability payoff is large.

These missiles attack enemy radars and would help suppress Russian air defenses. That would allow the Ukrainian air force to conduct strikes against Russian forces with less risk but also potentially allow strikes deep into Russian territory, with the risk of escalation.

Forty MaxxPro mine-resistant ambush-protected vehicles (MRAPs) with mine rollers. MRAPs are similar to the armored High Mobility Multipurpose Wheeled Vehicles (HMMWVs) provided in this and previous aid packages but are custom-designed for protection. The United States built thousands for the wars in Iraq and Afghanistan, most of which were either disposed of or stored.

The combination of the MRAPs and mine rollers is interesting. Mine rollers are just what they sound like—metal rollers in front of a vehicle that detonate mines. This allows clearance of routes through minefields or wherever there is some danger of mines being laid. That would be useful in clearing areas that Ukraine has already liberated but could also be used in offensive operations as Ukrainians penetrate minefields in front of the Russian front lines.

Although they are “armored,” these vehicles are still vulnerable. The armor can stop small arms but not larger weapons. Further, because the vehicles are both heavy and wheeled, they are susceptible to getting bogged down when driving cross country. This could be a major limitation in the mud season. 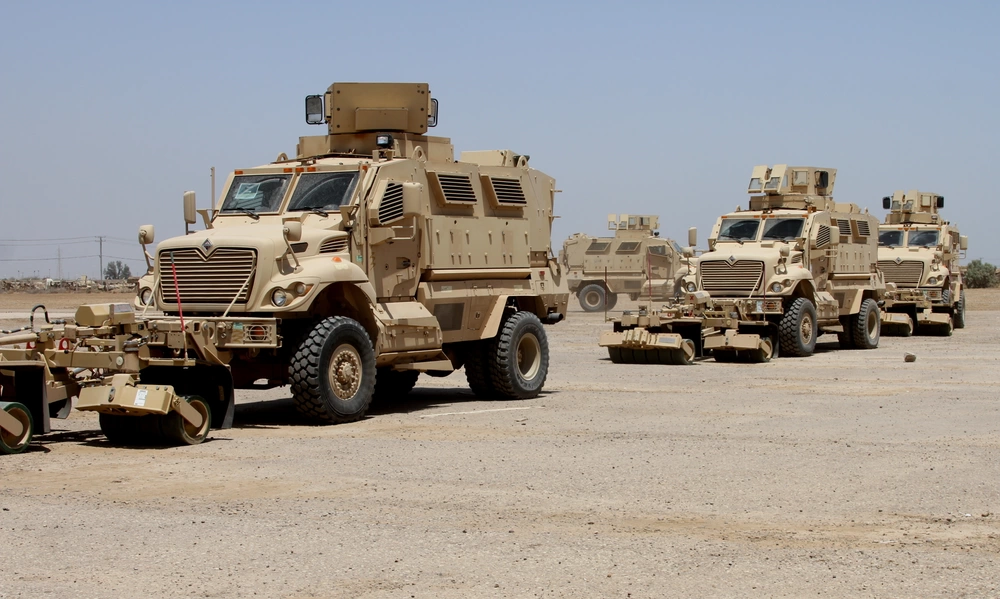 Fifteen Scan Eagle unmanned aerial systems. Scan Eagle is a small, long-endurance (20 hours), low-altitude unmanned aerial vehicle (UAV) that is launched from a ground launcher, not an airfield. Despite their long endurance, Scan Eagles are used tactically, close to the front lines because of communications limitations. They are well suited for finding enemy positions that can then be attacked by precision munitions. They are thus useful for the positional warfare that the war has degenerated into and will contribute to the attrition of Russian forces. Because they are small and vulnerable, losses will likely be high, so Ukraine will need a continuous supply of replacements. 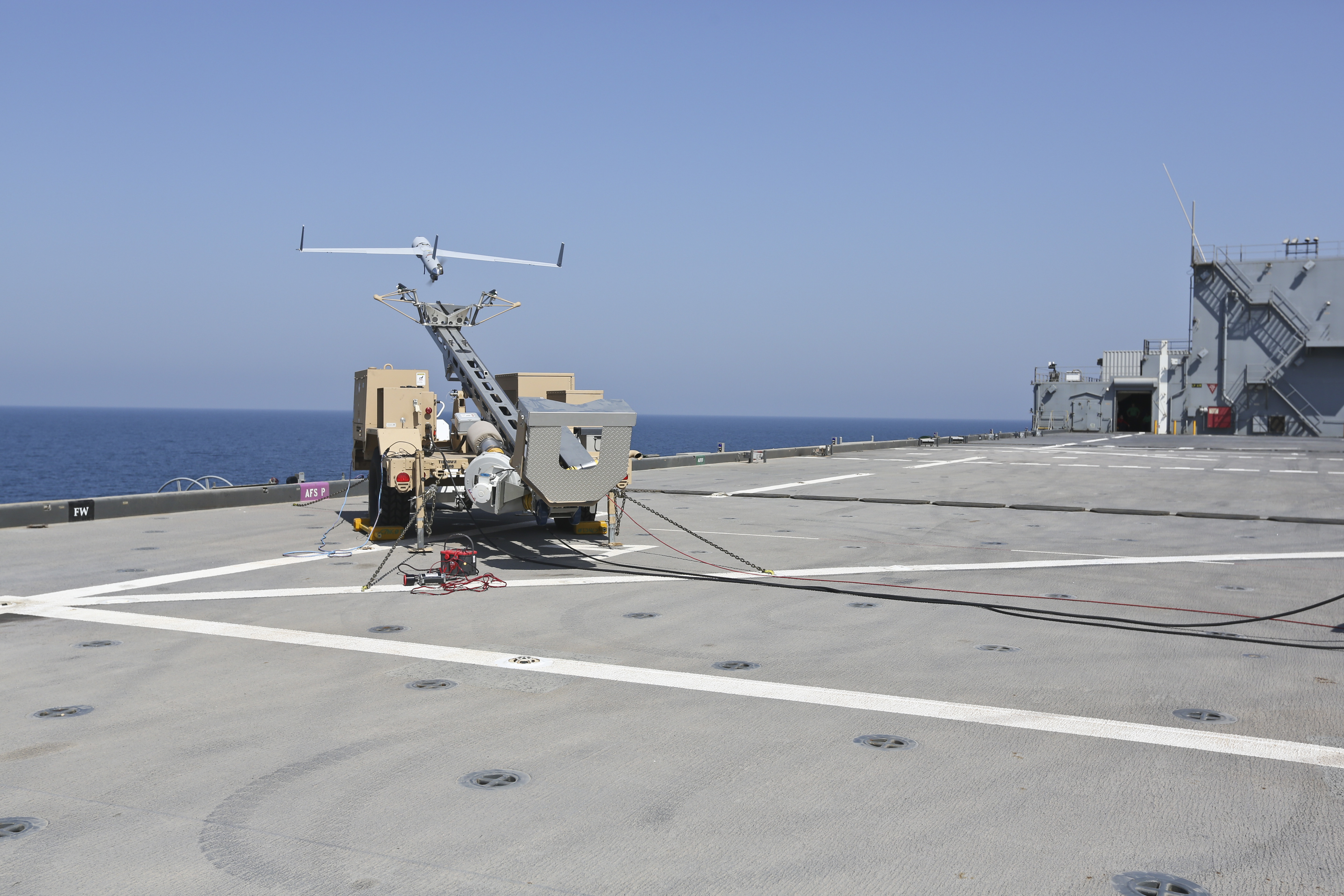 Observers have speculated about when the United States will run into inventory shortages that will affect aid packages. That point has likely arrived.

Sixteen 105 mm howitzers and 36,000 artillery rounds to go with them. Previously the United States had only provided the heavier 155 mm howitzers (M777 model). Because the M777 production line is now cold, sending more than the 126 howitzers already provided will be difficult. DOD had some excess howitzers available because the Marine Corps was deactivating most of its cannon artillery, and the Army could squeeze its stocks. However, because the Army still uses these howitzers, and total production was not that large (1,000), further transfers would have will to take howitzers from operational units. That induces risk―thus, the shift to 105 mm howitzers instead. These 105 mm howitzers are likely the M119, which is excess because most U.S. units transitioned some years ago to the heavier caliber. Expect more of these transfers in the future.

There is nothing wrong with the lighter 105 mm caliber. That was a U.S. standard for many years and is still used by a few light units. The United Kingdom has already provided Ukraine with a variant of the M119, so this is not unique. Because the howitzers are lighter, they are a bit more mobile. However, the spectrum of projectiles available is narrower. They cannot, for example, fire precision munitions.

1,500 tube-launched, optically tracked, wire-guided missiles (TOW). These anti-tank weapons are plentiful in the U.S. inventory but were not previously supplied to Ukraine. Because of TOW’s weight, they must be transported by vehicle, so they don’t have the mobility of a Javelin or NLOS, both of which the United States and allies have provided in large numbers. Because TOW stocks are so large and stocks of Javelins and NLOSs are diminishing, TOWs may constitute an increasingly large element of anti-tank weapons provided. 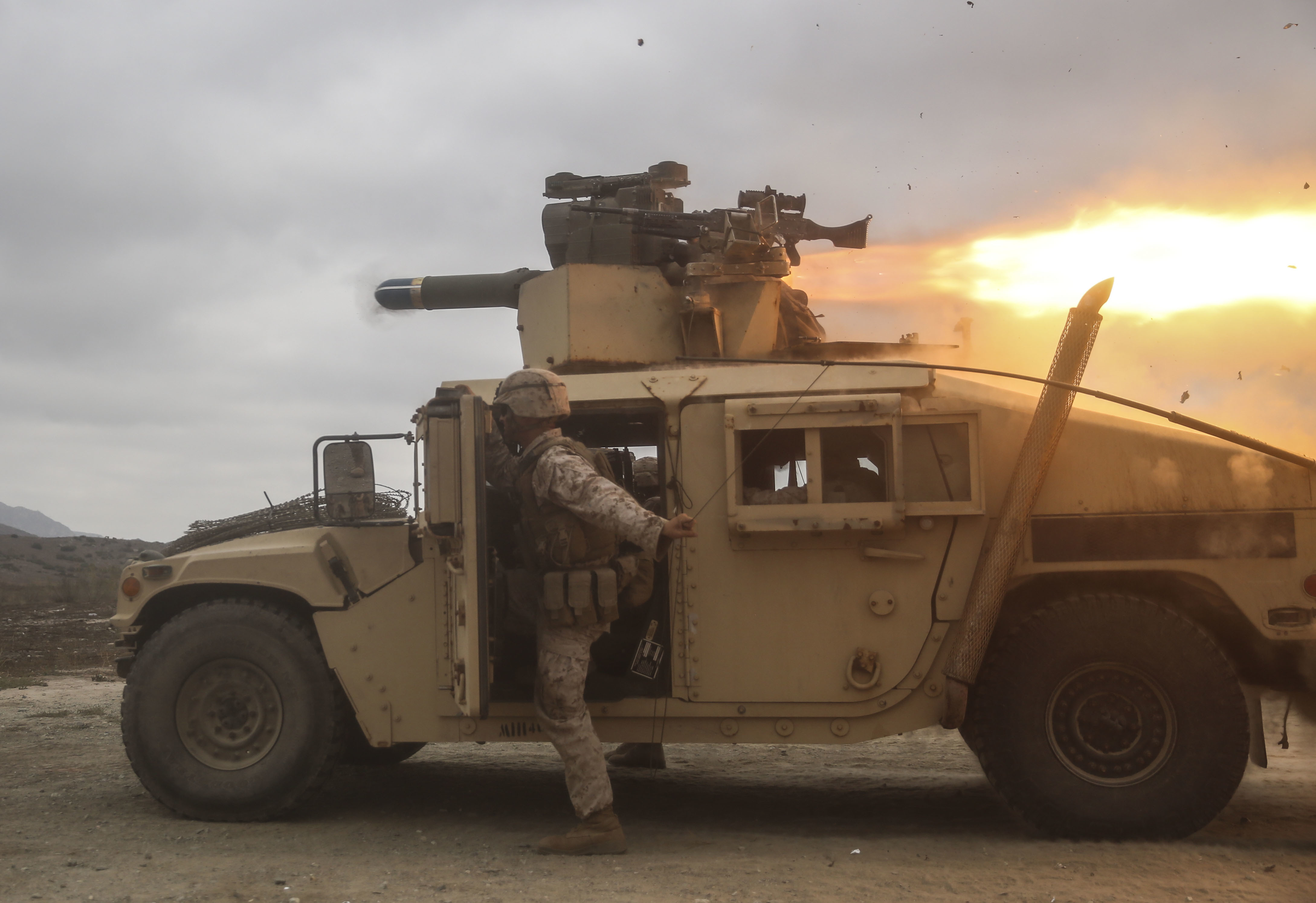 DOD has acknowledged that its announcements sometimes dissemble. For example, an earlier announcement cited “counter radar capability” but did not specify that this was the HARM missile. This omission has engendered suspicion about what else might be hidden or unstated. Indeed, the construct of the DOD announcements is that they “include” certain systems but don’t state explicitly that the lists are comprehensive.

Army Tactical Missile (ATACMS). One recent speculation is about whether the United States has provided or will provide the long-range ATACMS missile, which can be fired from HIMARS launchers. The current package provides “additional ammunition for high mobility artillery rocket systems” but does not say Guided Multiple Launch Rocket Systems (GMLRS) specifically. That the United States is providing ATACMS or some other undisclosed missile is unlikely. The administration has stated that it would not supply ATACMS to Ukraine because of concerns that it could strike targets deep inside Russia and thus escalate the conflict. Further, ATACMS is so visually distinctive when launched that it will certainly show up on social media eventually. Nevertheless, such undisclosed deliveries are not impossible and, as my colleague Tom Karako notes, “it gives the Russians a little bit of uncertainty about what we’re doing.” 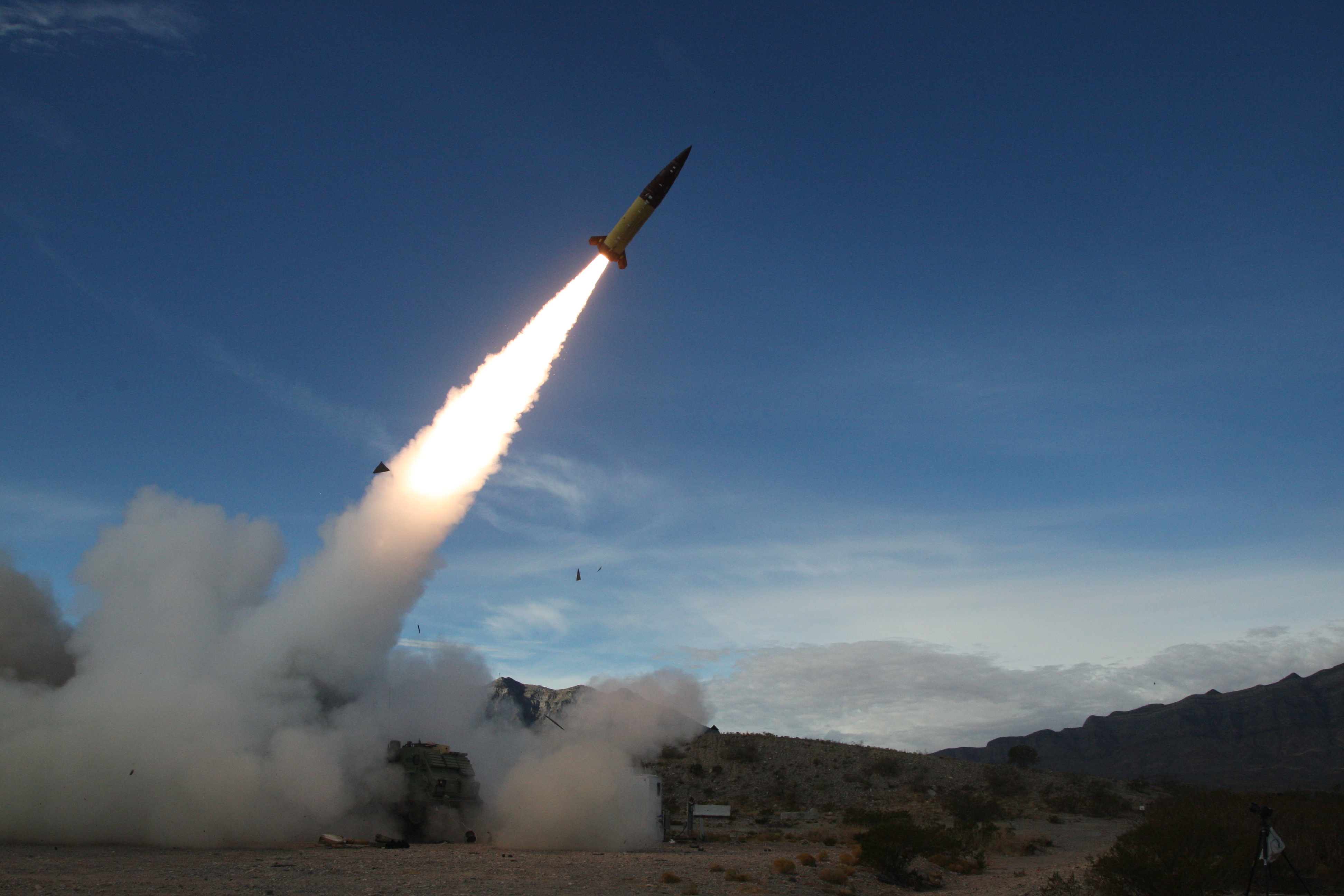 Excalibur. Announcements have not specified provision of the Excalibur precision 155 mm projectile, but it would be a natural complement to the GMLRS already provided, and DOD has said it was providing precision cannon munitions to Ukraine. Like GMLRS, Excalibur is guided onto the target by GPS and has been widely used by U.S. forces. Other precision munitions are available for howitzers such as the less expensive Precision Guidance Kit. The same reconnaissance capabilities that identify targets for GMLRS would work for howitzer precision munitions.

Javelin. The aid package contains 1,000 Javelins, bringing the total number provided to 8,500. Several months ago, there was speculation that the United States had already provided a third of its inventory. The continuing provision of Javelins indicates a willingness to accept additional risk to U.S. inventories and war plans and likely some confidence in industry’s ability to replace them. Although Javelin production has only been about 1,000 per year, DOD has pressed industry to increase that level. Still, DOD is likely having contentious internal discussions about how much risk to accept.

The $2.98 billion package announced on August 24 is different from previous packages in that Ukraine will buy equipment and services directly rather than having United States provide them. Equipment will take months or even years to produce and deliver. Thus, this will sustain the Ukrainian military over the long term, likely postwar, rather than increase its capabilities in the near or medium term. The money comes out of the Ukrainian Security Assistance Initiative (USAI) account, which received $6 billion dollars in May. (Note: Weapons deliveries like those described above, which now total $10.6 billion, are drawdowns of existing U.S. stockpiles. Items that come from drawdown authority go directly to Ukraine with DOD doing the contracting to backfill its inventories. In theory, drawdown weapons don’t need to be replaced. However, the administration has committed to do so, and the May appropriation includes $9 billion dollars to reimburse DOD for support given to Ukraine.)

The package includes “air defense systems, artillery systems and munitions, counter-unmanned aerial systems, and radars.” DOD later provided some specifics. The list is surprising since these are all things that have previously been supplied out of existing stocks; it seemed likely that the long-term package would include items like aircraft and combat vehicles that would take time to incorporate into Ukrainian forces but that a rebuilt Ukrainian military would need.

The one new item is a “Vampire” counter-UAV system. This is not widely fielded to U.S. forces but would be very helpful in countering Russian reconnaissance and surveillance UAVs.

The package might signal that some of these items are running low in the DOD inventories and that DOD can no longer supply them out of existing stocks—thus, the shift to new production. It is possible also that DOD is concerned about running out of money to replenish its stocks and wants to preserve that funding for truly critical items. The March supplemental package had about $3 billion for replenishment and the May supplemental package had $9 billion for a total of $12 billion. So far, the United States has sent $10.6 billion for equipment to Ukraine. That would mean that, in theory, only about $1.4 billion remains. Thus, DOD may be turning to the fund with a lot of money in it, the USAI, and preserving the fund with little money left, the replacement of drawdown items.

This means that the U.S. ability to provide equipment rapidly may be diminishing. That is not unexpected since the $40 billion aid package was aimed at sustaining Ukraine through the fiscal year, which ends September 30. That date is not so far off. The administration may need to ask Congress for more money soon. Although the bipartisan consensus for supporting Ukraine remains strong, there may be a fight with the progressive left and isolationist right about the wisdom of sending money abroad when there are pressing needs at home.