Lessons from Venezuela for Nicaragua

The Venezuelan crisis has alarmed the international community, which is still struggling to find the best way to address the ongoing political, economic, and social issues in the country. However, recent events indicate that another Venezuela is brewing in the Western Hemisphere: Nicaragua.

Opposition protestors took to the streets in Venezuela in February 2014, setting in motion a series of events that would have unimaginable consequences for the nation and the region. Although met with tear gas and gunfire, the protests soon gained momentum, leading to a nationwide movement demanding the removal of President Nicolas Maduro and widespread reform. Since 2014 Venezuela has spiraled further into crisis, with medication and food shortages, rampant violence, and increased repression of human rights driving 3 million Venezuelans out of the country thus far.

This April, Nicaragua saw a very similar chain of events play out; protests against social security changes, compounded by the closing of political space, spiraled into calls for President Daniel Ortega to step down and hold early elections. Like Maduro, Ortega responded to these demands with deadly force and repression, drawing international condemnation.

Perhaps no case better illustrates the similarities between the Venezuelan crisis and the situation in Nicaraguan than the situation the press faces in these countries. In 2017 Freedom House assigned Venezuela a press freedom status of "Not Free," while Nicaragua was classified as "Partly Free." That same year, 8 television channels, 54 radio stations, and 17 print publications ceased their activities in Venezuela due to a combination of direct pressure from the government and, in the case of print sources, a lack of access to paper. The newspaper El Nacional is considered the last independent daily print publication in the country.

Since the beginning of the Nicaraguan crisis in April, President Ortega has had a similarly antagonistic relationship with the news media in his country. Three days after the protests began the Nicaraguan telecommunications regulation institution (Telcor) censured 4 TV channels as punishment for their coverage of the protests. The next day, a journalist who was reporting on a protest via Facebook Live was shot and killed. And although Ortega later allowed the censored television channels to return to the air, attacks against journalists and media outlets have continued. On October 29, 100% Noticias was once again removed from the air, and on the night of December 3 police raided the headquarters of popular radio station Radio Diario, detaining many of its employees and ordering them to cease transmission.

The rapid deterioration of the freedom of press in Nicaragua reflects only one of the many similarities between the situations in the two countries. The chart below reflects some of the others. 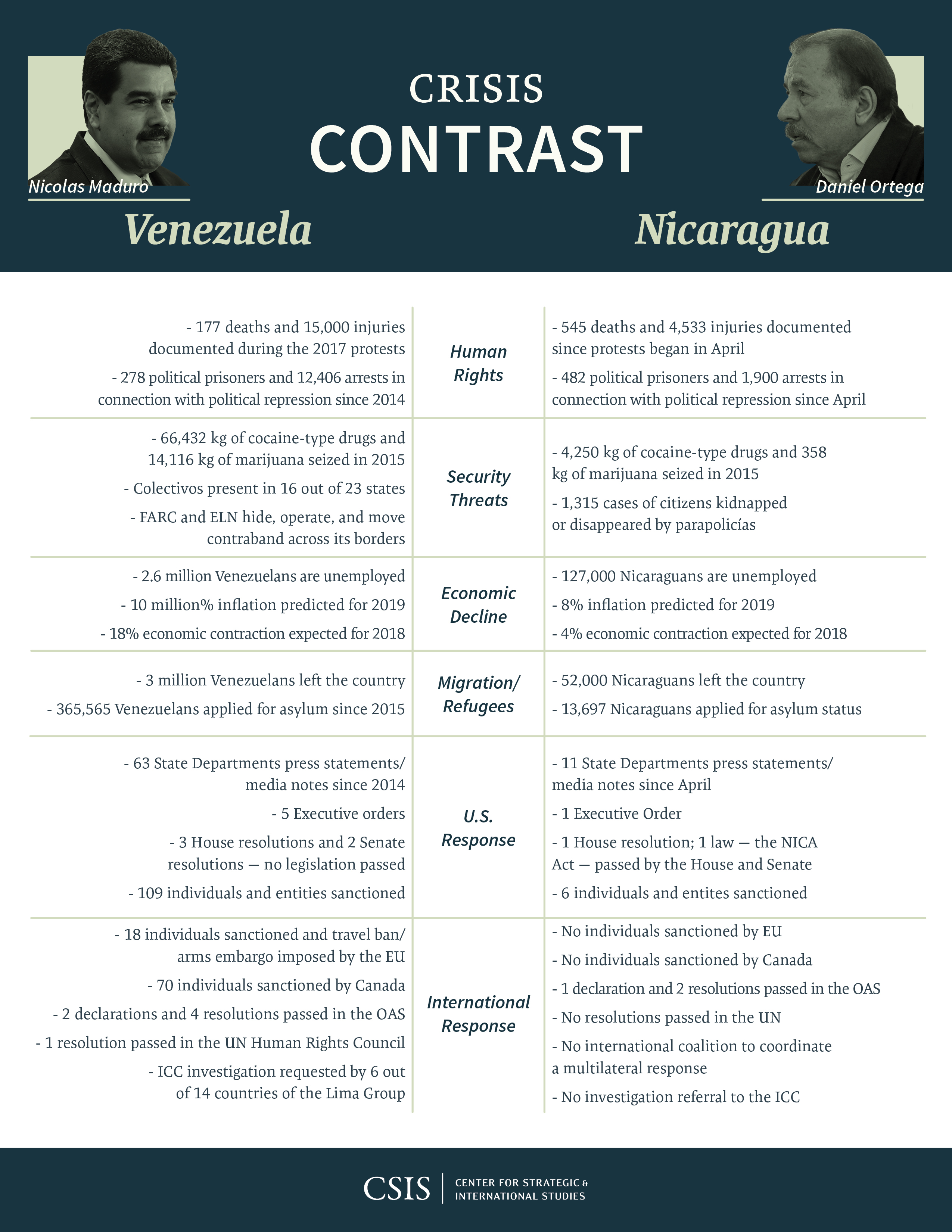 Lessons Learned: Recommendations for the International Community’s Response to Nicaragua

1. Sanctions must become part of a larger, more comprehensive plan

There is little consensus in the international community surrounding the current effectiveness of economic sanctions. If they are to be successful, sanctions imposed on Nicaragua must be multilateral, and they must be part of a coherent strategy aimed at creating pressure on the Ortega regime and forcing the restoration of democratic institutions. As the comparison chart illustrates, the United States has sanctioned six Nicaraguan individuals and entities, while the European Union and Canada have yet to impose any sanctions relating to Nicaragua. For U.S. sanctions to be effective they cannot be limited to the United States.

However, sanctions alone will not be enough. While the passage of the NICA Act is an important step in the right direction, the international community must find more ways to apply pressure on the Ortega regime. One possibility is to follow the example of Argentina, Canada, Colombia, Chile, Paraguay, and Peru in referring Venezuela to the International Criminal Court. After all, recent events have produced clear evidence of the Nicaraguan government’s accountability when it comes to repression of protests, arbitrary imprisonment, abuse of political prisoners, and disappearances by government-sponsored militias.

While it is essential that the international community form a united front to confront the Ortega regime, it is equally necessary that they work together with members of the opposition and civil society, both those who remain in the country and those living in exile, to maximize the effectiveness of their efforts.

In February 2018, the Venezuelan opposition and members of the Maduro regime met in the Dominican Republic for a much-anticipated series of talks, complete with international mediation by government figures from Chile, Spain, Mexico, and Bolivia, as well as Dominican President Danilo Medina. The four attempts at dialogue in Nicaragua since April of this year have been equally fruitless. Rather than using these meetings as opportunities for sincere and honest conversations aimed at finding an end to the crisis, the Maduro and Ortega regimes used the talks to buy time and divide the opposition. In light of these failures, it is clear that dialogue alone will not bring an end to the crisis; however, it is an important tool, and must remain an aspect of the opposition and the international community’s strategy in countering Ortega’s dictatorial leanings.

3. Create safeguards to ensure organized crime does not become involved

Colectivos have become a formidable threat to citizen security and rule of law in Venezuela. Estimates place the number of colectivo members between 6,000-10,000, spread across 16 states. Reports indicate that colectivos fund their activities through narcotrafficking and other illicit pursuits.

Similarly, Nicaraguan parapolicías have been involved in violent confrontations with opposition protestors, receive government support and resources, and are linked to Nicaraguan gangs. A report from Insight Crime argues that “The parapolice groups utilized by the Nicaraguan government have undoubtedly shown their propensity for violence, and it’s possible that the current unrest could allow them to hone their criminal skills and delve further into other illicit activities like extortion and kidnapping.”

With government support and immunity from legal repercussions, it is highly likely that the parapolice will grow into criminal organizations rivaling the colectivos, as the Insight Crime report suggests. Restoring Nicaragua’s democracy must be a priority for the international community before organized crime completely penetrates the Nicaraguan government as it has in Venezuela.

4. Hold foreign actors accountable for their political and economic support to the Nicaraguan regime, especially Cuba, Venezuela, and Russia

At an event held at CSIS in November, Miriam Kornblith, director for Latin America and the Caribbean at the National Endowment for Democracy, argued that Nicaragua, Venezuela, and Cuba regularly exchange “worst practices.” These three regimes have a history of close ties. President Nicolas Maduro met with President Miguel Diaz-Canel of Cuba two days after Diaz-Canel’s inauguration. During the UN General Assembly in October 2018, President Diaz-Canel defended the Venezuelan and Nicaraguan regimes. This close alliance led national security adviser John Bolton to dub the three countries the "Troika of Tyranny."

Bolton is not the only U.S. government official who has expressed concern; in his posture statement to the Senate Armed Services Committee on February 15, 2018, then-commander of the U.S. Southern Command Admiral Kurt Tidd warned of the growing threat of Russia in Latin America, specifically referencing its relationship with Cuba, Nicaragua, and Venezuela.

The diplomatic support Nicaragua receives from Russia, Venezuela, and Cuba severely undercuts international efforts to apply pressure on the Ortega regime. Sanctions specifically targeting Russians, Venezuelans, and Cubans collaborating with the government of Nicaragua would go a long way towards isolating Ortega from these allies.

5. Build preventive capacity in order to stave off a humanitarian crisis

As the Nicaraguan crisis worsens, forced migration will only increase. The international community needs to formulate a plan to ensure that both migrants and Nicaraguans who choose to remain in their country are able to meet their basic needs, and do not face the conditions that many Venezuelans face today. If Ortega chooses to reject aid as Maduro did until November 26, the international community must explore alternatives to a traditional humanitarian response.

While the international community has fallen short in delivering aid inside of Venezuela, many Venezuelans have taken advantage of new technologies to do so themselves. The use of independent cryptocurrencies (as opposed to a regime-controlled currency like the Venezuelan petro) enables non-profit organizations to buy and distribute food within Venezuela. Encouraging innovative technology tools such as cryptocurrency will help limit the suffering of Nicaraguans.

As Venezuela’s crisis has proven, international inactivity has tremendous consequences for regional stability. While recent events in Nicaragua certainly differ from Venezuela’s experiences of the past four years, there is a clear consensus that the Ortega regime is following a similar path to that of Nicolas Maduro. In a speech given at the UN Security Council meeting on the crisis in Nicaragua, then-U.S. ambassador to the UN Nikki Haley pointed out: “We are long past the point at which the narco-state of Venezuela stopped being a Venezuelan security problem. And now, we are seeing the start of this disastrous cycle in Nicaragua.” The role of the international community is crucial in helping ensure that Nicaragua does not travel any further down this path; applying the lessons learned from Venezuela will be a good start.

Moises Rendon is an associate fellow and associate director of the Americas Program at the Center for Strategic and International Studies in Washington, D.C. Mia Kazman is an intern with the CSIS Americas Program.