In an interview with Radio Free Asia 10 days ago, soon-to-be National Security Adviser John Bolton discussed a potential meeting between President Donald Trump and North Korean leader Kim Jong-un, which the president had agreed to hold a day or two before asking Bolton to take the position as his national security adviser.

In response to questions about the possible meeting between the U.S. president and the DPRK leader, Bolton said that North Korea (and Iran) have followed the pattern of “using negotiations to camouflage their on-going nuclear and ballistic missile efforts.” On strategy for a meeting with North Korea he continued, “I think we should insist that if this meeting is going to take place, it will be similar to discussions we had with Libya 13 or 14 years ago: how to pack up their nuclear weapons program and take it to Oak Ridge, Tennessee, which is where the Libyan nuclear program [is].”

In this interview, Bolton indicated that discussions with the North would be short and should follow this “Libyan Model.” The real question, however, is this: Is the “Libya Model” a productive starting point for a discussion with the leader of North Korea?

Until his death in 2008, I was chief of staff to Representative Tom Lantos (D-CA). During the last several years of his life, Lantos was the senior Democratic member of the U.S. House Foreign Affairs Committee, and I was the Committee’s Democratic staff director. Lantos was the first senior American to meet officially with Libyan leader Muammar el-Qaddafi in January 2004—just three weeks after Qaddafi had announced his renunciation of nuclear weapons. I was with Lantos when we arrived in Tripoli. A handful of Americans had been there about a week arranging for shipment of the weapons of mass destruction components to the United States. Lantos and two staffers had extended conversations with the Libyan leader, and we returned again three more times that same year to continue the conversations with Qaddafi.

When the United States established full diplomatic relations with Qaddafi’s government two years later in 2006, Lantos said, “In taking these actions, the United States dramatically demonstrates to the remaining rogue states—and particularly to Iran—that our country takes note of positive changes in behavior and is more than willing to reciprocate.”

In January 2005, one year after the first several of his many visits to Tripoli, Lantos traveled to Pyongyang to talk with DPRK officials specifically about the Libya example and its applicability to North Korea. I was with him for those conversations in Pyongyang. Lantos spent a great deal of time with Kim Kye-gwan, North Korea’s vice foreign minister and principal DPRK negotiator with the United States. Lantos and our delegation also met with Vice President Yang Hyong-sop of the People’s Assembly and with Foreign Minister Paek Nam-sun.

In all these meetings, Lantos made the argument that abandoning nuclear weapons—as Libya had done—would open the door to diplomatic relations with the United States and to significant improvements in bilateral political and economic relations. Lantos was not there as an official U.S. government negotiator, but as a member of Congress interested in seeing progress in the relationship between the two countries, and he made that point in Pyongyang and on his return.

Six years later in 2011—after Tom Lantos had passed away and North Korea had tested two nuclear devices—the United States received a request for humanitarian assistance from the North. There were a number of indications, which we received directly and indirectly, that the North was interested in making progress in its relationship with the United States, and we determined that we should examine the possibilities. The United States was willing to consider possible aid, though we had to determine the extent of the need, and we had to be certain that conditions could be met to monitor the distribution of any U.S. aid that might be provided.

As U.S. special envoy for North Korean human rights at the time, I led a delegation to Pyongyang to open discussions on the topic of aid. A part of my delegation was composed of American agriculture and food specialists who visited areas some distance from the capital to assess the need. My discussions with Foreign Ministry officials in Pyongyang focused on humanitarian needs, our requirements to monitor distribution, and an American citizen being detained in North Korea at the time. The DPRK showed its interest in making progress with the United States because the American detainee was released to my custody when we departed on our return flight to Beijing.

Near the end of our meetings in Pyongyang, we had a lengthy dinner and a serious conversation with Kim Kye-gwan, now first vice foreign minister and still heavily involved in America policy. When we met before the dinner, I told Kim that I had accompanied Representative Lantos on his visit six years earlier. Kim replied that he knew I had been with Lantos. I mentioned to him that Mrs. Lantos very much appreciated the kind letter he sent to her when Lantos had passed away three years earlier.

Kim turned immediately to that earlier conversation with Lantos. “Congressman Lantos came to urge us to follow the example of Libya,” said Kim, “but see what has happened in Libya.”

In May–June of 2011 at the time I was in Pyongyang, Libya was reeling from the effects of the “Arab Spring” across the Maghreb. A popular uprising against Qaddafi was in full eruption, and the capital Tripoli had just fallen to the rebels. Shortly after I left Pyongyang, the International Criminal Court issued a warrant for the arrest of Qaddafi. A few months later, Qaddafi was killed when he and a few body guards were surrounded by rebel forces.

“No,” Kim said to me shaking his finger and emphasizing his words, “we will not follow the example of Libya.”

Flash forward to today. We are on the eve of momentous talks at the highest level between President Trump and leader Kim Jong-un. This could be an opportunity for a historic shift in relations with the DPRK that could make an important difference in Northeast Asia. But it could just as easily turn into an unmitigated disaster with dreadful consequences. There may be an opportunity for a serious conversation, but it needs to be carefully and thoughtfully prepared. Starting at the top doesn’t leave any place else to go.

One thing is clear: if the United States is to make progress in the denuclearization of North Korea, it would be well to avoid any reference whatsoever to Libya. In fact, a productive point of departure in preparing for talks with Kim Jong-un might be to determine how these talks are going to persuade Kim that moving forward on denuclearization will not produce a result like Libya. 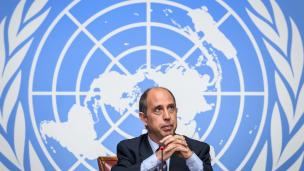