‘Lifting Up Our Values at Home’: How to Revitalize NATO’s Political Cohesion

“The transatlantic alliance is the strong foundation on which our collective security and our shared prosperity are built.” In a much anticipated speech at the 2021 virtual Munich Security Conference, President Joe Biden praised the transatlantic alliance but also warned it was facing an “inflection point.” Noting that “democratic progress is under assault,” the U.S. president emphasized the importance of upholding democratic values amid growing competition with Russia and China. In other words, democratic resilience in NATO produces security gains.

NATO’s strength and resilience have long derived from the allies’ shared commitment to the values and spirit of the North Atlantic Treaty. These include the principles of democracy, individual liberty, and the rule of law as well as a commitment to development of “peaceful and friendly international relations.” Yet today, these principles are unequally upheld across the alliance. Just as NATO faces a deteriorating external security environment, it is also confronting internal turbulence, starting with an erosion of democratic norms in some member countries, such as Turkey, Hungary, and Poland, but also self-centered behaviors that threaten to undermine its unity.

NATO is a community of sovereign states, each with its own geography, interests, and political outlook. In this respect, it is no surprise that complete harmony is impossible, and that the alliance has experienced periods of tension and divergence. In the late 1960s and early 1970s, NATO faced a test of its values as it debated how to deal with growing authoritarianism in Portugal and Greece and multiple coups in Turkey. Ultimately, members decided not to address the problem, instead prioritizing cohesion and geopolitical interests in that tense Cold War period. Yet for several reasons, the situation is different this time and should be dealt with urgently.

First, an inattention to the principles of democracy, individual liberty, and the rule of law in a member country creates societal vulnerabilities that competitors can exploit. Russia, for example, preys on the grievances of racial and ethnic minorities in NATO member countries in order to weaken national-level governance and cohesion. Likewise, a compromised media environment allows disinformation campaigns to flourish, while corruption opens space for Russian networks to operate and gain influence. Even allies with strong democratic institutions, such as Germany, are increasingly targets of Russian disinformation campaigns. In these ways, a deficit in internal values quickly becomes an external security threat.

Second, waning attention to NATO’s core values has resulted in some allies moving away from upholding the North Atlantic Treaty commitment to promote “peaceful and friendly international relations.” In practice, this means member countries are more willing to pursue national decisions even when they run against NATO’s collective interests. Examples include Turkey’s invasion of Northeast Syria without the consultation of allies and its acquisition of the Russian S-400 missile system even though it can undermine NATO integrated air defense.

Finally, lack of respect for NATO principles has empowered member states to bring bilateral disputes into the alliance, as was the case in 2019, when Hungary accused NATO partner Ukraine of mistreating ethnic Hungarians living in western Ukraine based on Ukraine’s introduction of a restrictive language law. Rather than tackling the issue bilaterally, Hungary brought it into the alliance, blocking Ukraine’s NATO Membership Action Plan and cancelling meetings of the NATO-Ukraine Commission. Internal tensions can also negatively affect NATO’s military tasks, as recently witnessed when Turkey blocked a defense plan for the Baltic States and Poland on the grounds that NATO did not recognize the Kurdish People’s Protection Units (YPG) as a terrorist organization.

Any of these points of disunity could be used by strategic competitors as venues to destabilize individual allies or NATO as a whole. As highlighted by the 2020 NATO Experts Group report, “a drift toward NATO disunity must be seen as a strategic rather than merely tactical or optical problem.” Despite the importance of preserving NATO’s values base and, in turn, its political cohesion, allies have nonetheless lacked the political will or legal instruments to effectively address in-house tensions and divergences.

In contrast to the European Union, which is arguably in a better position to address democratic backsliding through its rule of law mechanism, NATO has no legal provisions for suspending or expelling an ally who violates the alliance’s founding principles. Also, the fact that NATO operates by consensus means that any punitive action against the offending ally risks incurring retaliatory action on other NATO business.

Yet however difficult, NATO can no longer afford to turn a blind eye on these internal strains. From its founding, it has been more than just a military alliance. NATO has embraced a political role built on a shared democratic identity. As the alliance seeks to exercise more fully the power of this political dimension, shoring up its values is vital to realizing the full benefits of collective security. A lack of response from NATO on these issues would ultimately undermine its reputation and credibility, most notably toward accession candidates and partners.

With NATO in the midst of an adaptation process and a new U.S. administration committed to defending democratic values and restoring the transatlantic alliance, the time is right for tackling this issue. Washington has the political sway to act as a “first among equals” within NATO and push allies to seriously address this challenge. However, a mere declaration of good intentions is not enough. If allies want to uplift NATO’s political cohesion, they will need to be ambitious. We recommend the following graduated approach:

First, allies should recommit to abide by the principles of the North Atlantic Treaty. These principles are often mentioned in NATO’s official communiqués in a cursory way, reflecting the limited attention given to them within the alliance. Allies should, as a first step, adopt at the highest level a declaration reaffirming the spirit and letter of the Washington Treaty. This could happen in conjunction with or, ideally, be imbedded in the new Strategic Concept that NATO is likely to launch later this year. While this declaration is not an end in itself, it is a first step to focus member countries and remind them what they will be held accountable for. Regarding the substance of such a pledge, the recent Reflection Group provides a good template with its proposed code of good conduct. This includes the North Atlantic Treaty articles and two new tenets focused on good behavior. 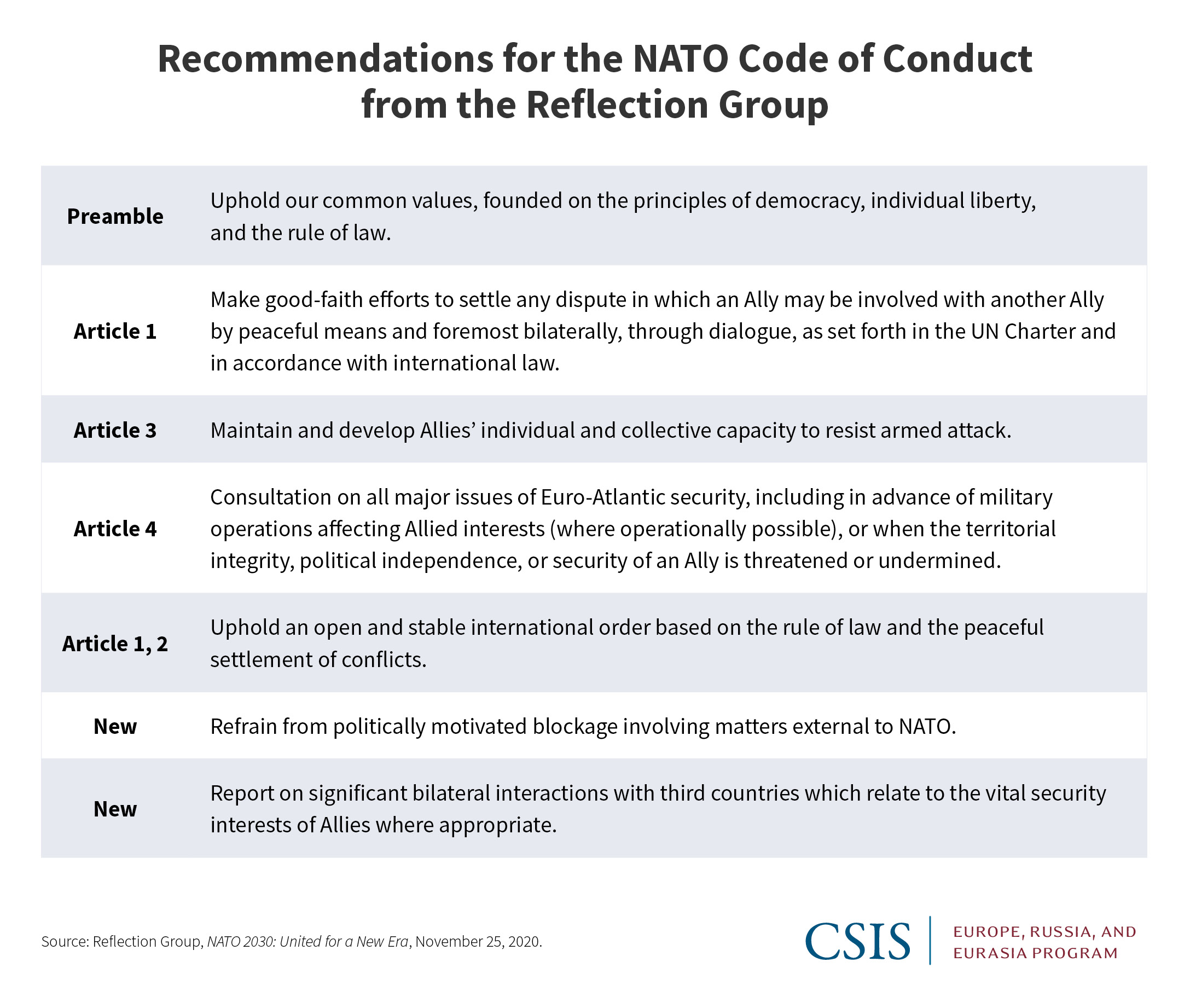 Second, NATO should monitor individual Allies’ compliance with these principles. To have a meaningful effect, such declaration needs to be complemented by an evaluation of its actual implementation, on the basis of an annual report prepared by the International Secretariat under the authority of the assistant secretary general for political affairs or the deputy secretary general. Building on existing metrics and findings (from nongovernmental organizations or other international organizations such as the European Union or Council of Europe), this report would provide a basis for a periodic discussion on the political health of the alliance. Ideally, the assessment would be linked to NATO’s resilience metrics, in effect underscoring their link with external security threats. In addition to this cyclical process, an “emergency brake” mechanism, similar to what the European Union has established under its rule of law mechanism, could be put in place to allow an ally, or group of allies, to request a discussion at the North Atlantic Council or ministerial level when a serious violation of the declaration by an individual ally occurs. Such discussion would shed light on the problematic behavior of the ally in question and create political pressure in itself.

Third, NATO should raise the political cost for allies who break the rules. This is admittedly the most challenging course of action to implement given NATO’s consensus rule and the lack of legal mechanisms to sanction or expel members who violate NATO values and principles. As such, the alliance will need to be creative and use a mixture of incentives and disincentives, proceeding to this stage only when the above-mentioned monitoring and naming of violations of the code of conduct (behind closed doors) fail to achieve results. In terms of incentives, allies should make clear that decisions on NATO leadership positions, facility placement, or ministerial locations (once again planned to rotate among capitals) will consider respect for the code of good conduct. If this fails to induce better behavior, allies should move to publicize the infringement. If this further step also fails, allies would need to consider restrictions on the problem member, which could be decided by “consensus minus one” and encompass the following measures: suspension from participation in a specific committee, military planning, or exercises; suspension of intelligence sharing; or cancellation of exercises, ministerial meetings, or visits of NATO officials. Additionally, pressure can be brought to bear through bilateral or EU channels, in effect harnessing these instruments of power in support of NATO objectives.

Political will is vital to prevent such a framework from turning into a hollow shell. As the European Union has shown, actual implementation of the rules is not a given even when they are in place. NATO’s approach will also need to be proportional and graduated in order to give dialogue a chance to change behavior. If NATO moves too quickly or aggressively, it risks widening divisions in the alliance. Alternatively, if it moves too slowly or is overly technical in its approach, it will fail to achieve its broader political objective of repairing the values gap and restoring political cohesion. All in all, a careful balance between restraint and ambition will be paramount in this endeavor to renew NATO’s cohesion.