A Look at the CHIPS-Related Portions of CHIPS+

Read more about the science-related portions of CHIPS+ here.

The CHIPS and Science Act of 2022, known colloquially as CHIPS+—signed into law by President Biden on August 9—combines the science provisions of the House’s America COMPETES Act of 2022 with the Senate’s U.S. Innovation and Competition Act (USICA), which have been under negotiation in a bicameral conference committee since May 2022.

Advocates for this legislation point out that these features of the bill will help secure U.S. leadership in the global semiconductor industry, encourage industry leaders such as Intel and TSMC to establish manufacturing centers in the United States, and help ensure U.S. competitiveness in innovation and advanced manufacturing. Renewing domestic production is also important for creating more resilient and reliable supply chains that support a wide variety of civilian, military, and dual-use technologies.

This Critical Questions piece will focus on the CHIPS-related portions in Division A of the CHIPS+ legislation.

Q1: What are the motivations behind CHIPS?

A1: Securing the future of the U.S. semiconductors industry has been a concern, as the nation’s share of global semiconductor fabrication capacity has declined over the past several decades. Today, the United States is home to just 12 percent of the world’s semiconductor manufacturing capacity (down from roughly 40 percent in 1990) and makes up an even smaller portion of the most advanced chips found in cutting-edge civilian and military technologies. This decline follows broader economic trends in recent decades, in which many U.S. semiconductor firms transitioned to a “fabless” model, retaining the high-value design elements of chip development while outsourcing their fabrication abroad, primarily to East Asia. Taiwan, South Korea, and Japan are now home to roughly 80 percent of the world’s fabrication capacity. Many large U.S. tech firms, including Apple, Nvidia, Google, and others rely on firms based in Taiwan alone for roughly 90 percent of their chip production.

Amid strains in international supply chains caused by Covid-19 lockdowns and border closures, policymakers in the United States became aware of the geopolitical and economic risks of this concentration of chip fabrication overseas. Semiconductors are ubiquitous, embedded in everything from toasters, smartphones, computers, and cars, to hypersonic guided missiles, advanced telecommunications infrastructure, and artificial intelligence (AI). However, many U.S. defense technologies and systems overwhelmingly rely on commercial chips sourced from Taiwan—a source of strategic vulnerability. In addition, the shortage of cars, trucks, and other consumer goods caused by the disruptions in the supply and distribution of chips raised the public profile of this problem. The aim of the CHIPS Act is to reduce U.S. reliance on foreign-made semiconductors while also bringing high-tech innovation in manufacturing and research and development (R&D) back to the United States.

Q2: What's included in Division A?

A2: Division A of CHIPS+ has three major components: (1) a program for the incentivization of the construction, modernization, or expansion of semiconductor fabrication facilities or equipment; (2) a series of programs led by the Department of Commerce meant to drive R&D and workforce activities for advanced semiconductors; (3) supplementary programs for related supply chain, national security, and international cooperation initiatives. 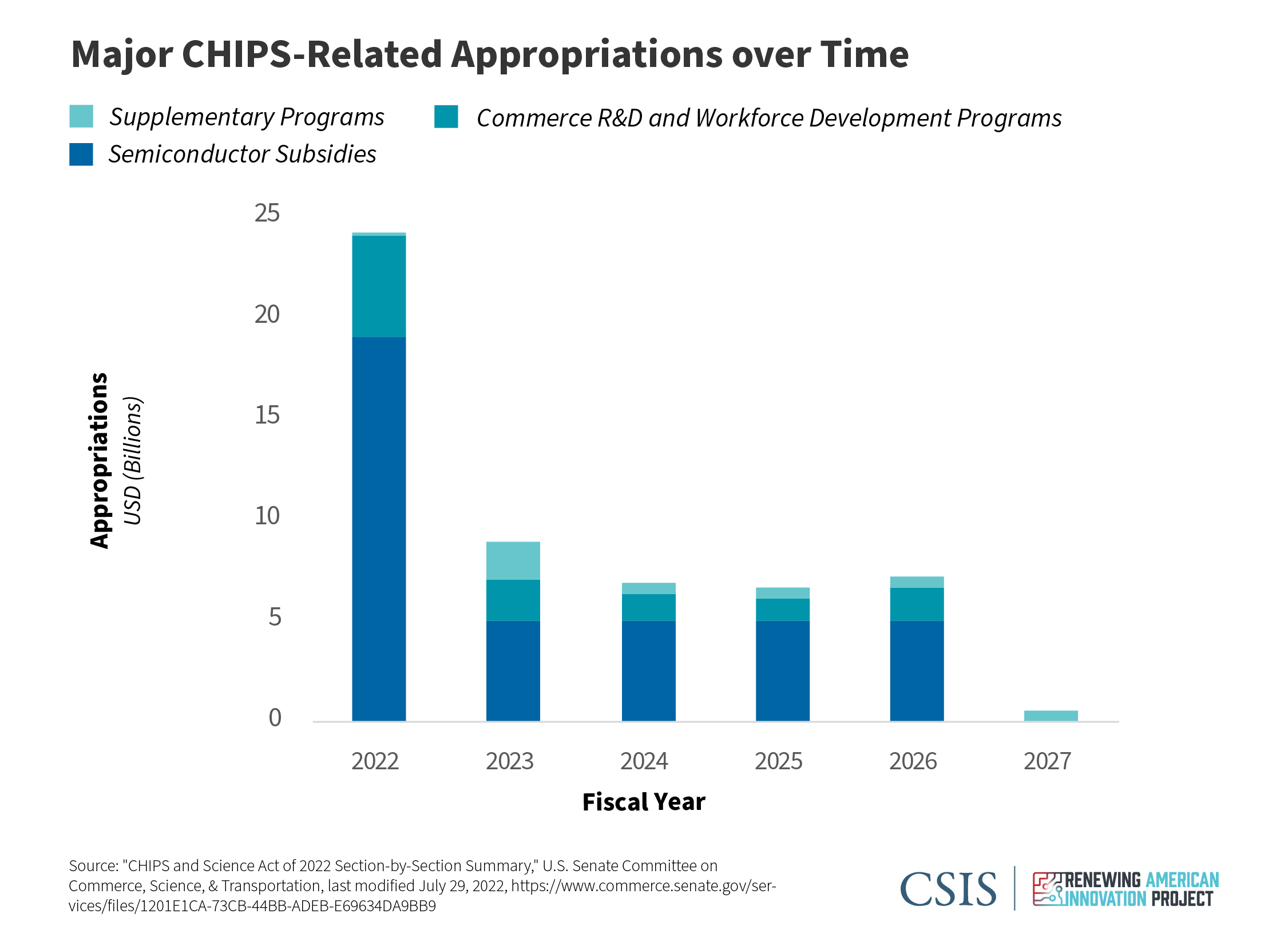 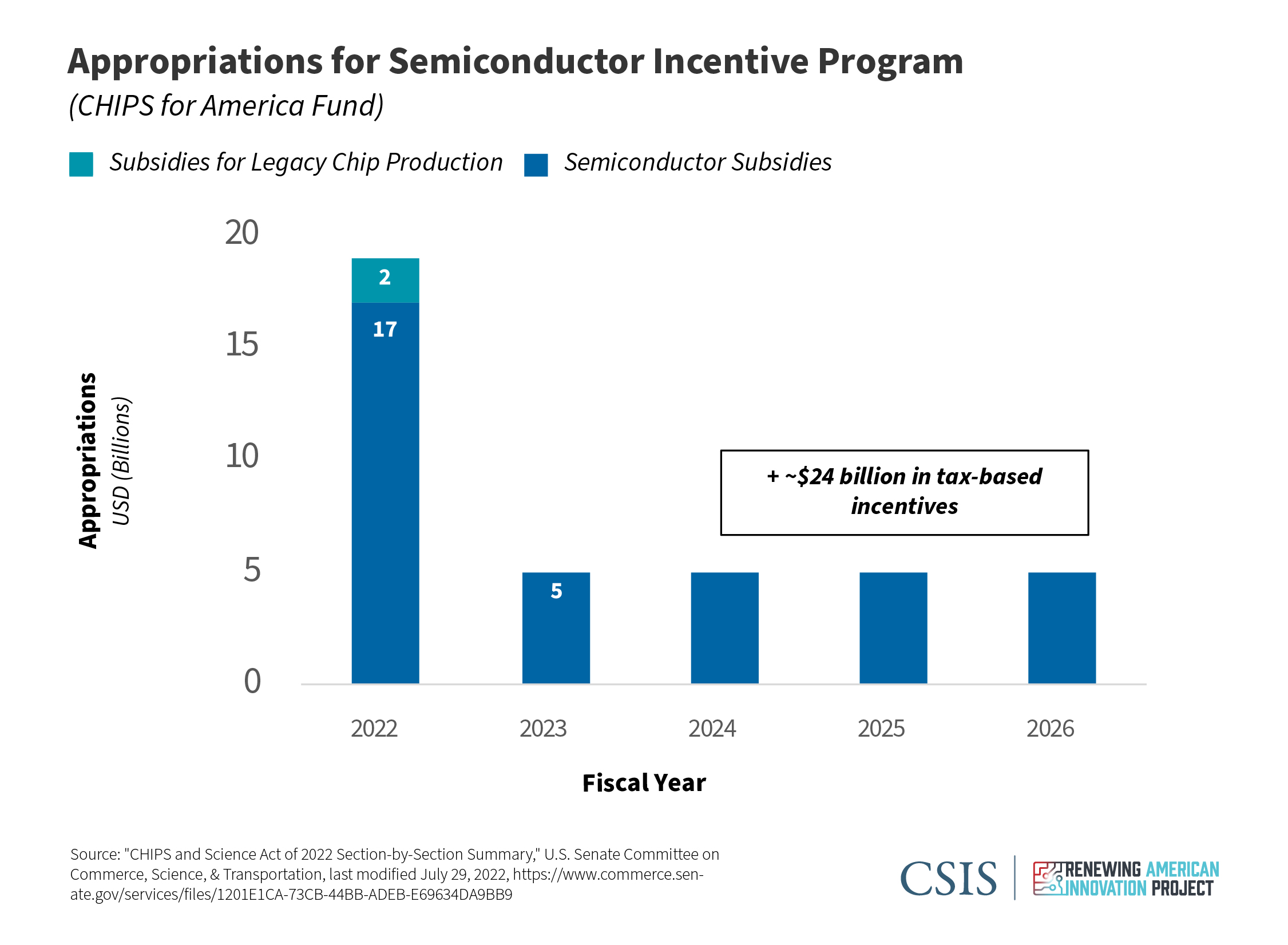 The act appropriates $39 billion in direct payment subsidies for expanding semiconductor manufacturing, research, packaging, equipment, and materials capacity in the United States. Significantly, CHIPS+ expands the eligibility for incentives to downstream materials and equipment suppliers—a change from the CHIPS for America Act passed under the National Defense Authorization Act for Fiscal Year 2021.

The bulk of the $39 billion is allocated for FY22, suggesting most of the spending will take place soon after this bill is signed into law. Of the $19 billion authorized for FY22, $2 billion will be dedicated toward facilities relating the production of “legacy chips,” or less sophisticated semiconductors critical for the automotive and defense industries. This allocation is meant to address short-term supply bottlenecks that are driving up prices for cars and slowing the production of military equipment such as Javelin missile systems being sent to Ukraine. For FY23–26, $5 billion is allotted per year.

Congress has also included a version of the Facilitating American-Built Semiconductors (FABS) Act, (renamed the Advanced Manufacturing Investment Credit, or AMIC) in the finalized CHIPS Act. This provision—which authorizes a 25 percent tax credit toward the purchase, construction, manufacture, or utilization of equipment or property which is integral to the operation of an advanced chip manufacturing facility—was high on the wish list for semiconductor firms, as it provides an ongoing incentive that will outlive CHIPS subsidies.

The version included in CHIPS+ omits certain wage and apprenticeship requirements that were present in previous versions of the AMIC. If they desire, firms can elect to receive this incentive as a direct payment. The Congressional Budget Office estimates that these tax credits will cost the federal government roughly $24 billion through FY2031.

Congress has also acknowledged the need for maintaining U.S. leadership in semiconductor R&D by appropriating $11 billion toward a series of initiatives led by the Department of Commerce meant to promote cutting-edge chip research in the United States and to develop a domestic workforce capable of sustaining this research. The various programs have funds explicitly authorized for their establishment in FY22, then in each following fiscal year, will draw from a pool of funds as allocated by the secretary of commerce. 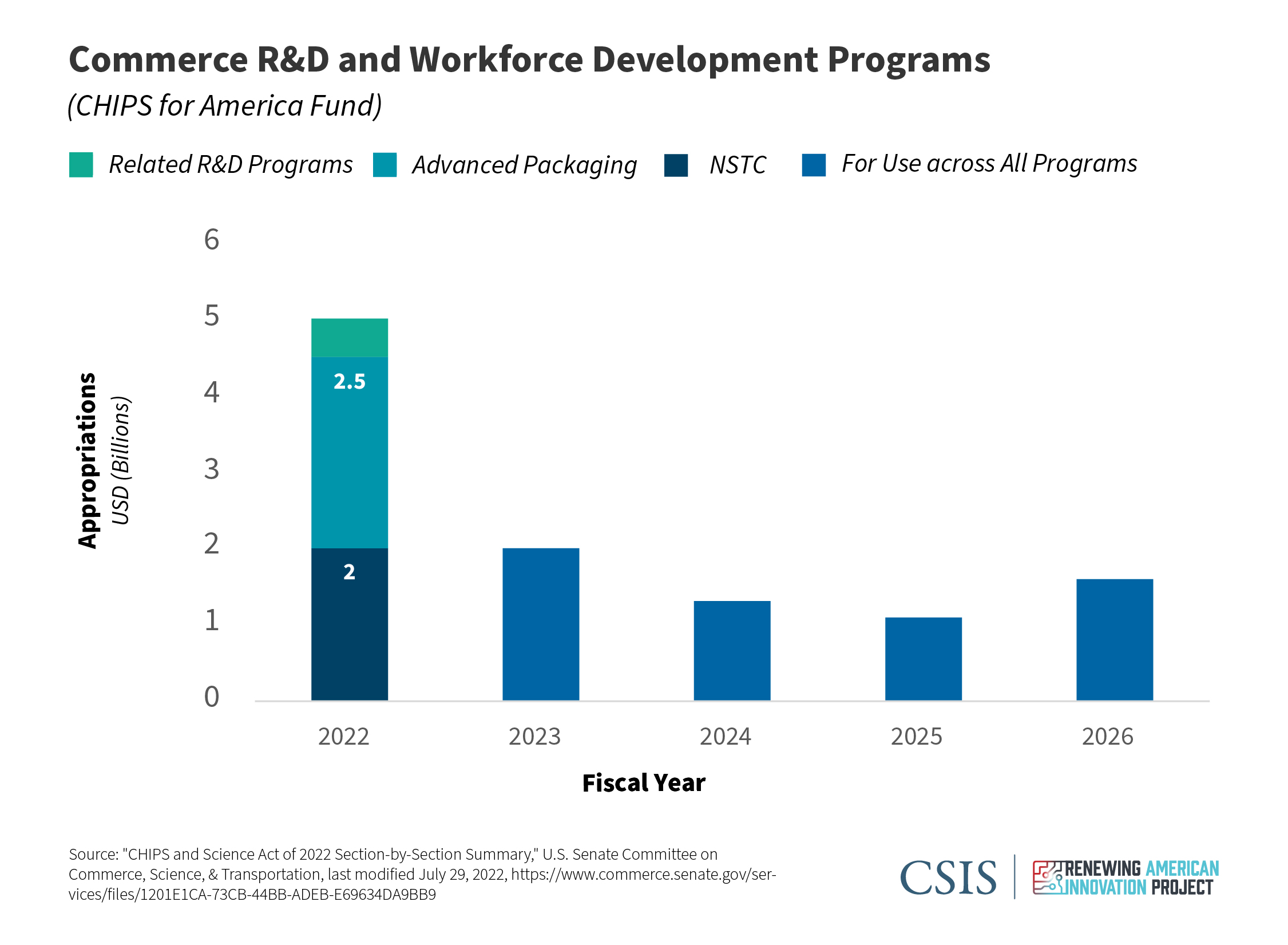 The NSTC, a public-private consortium of participating private firms, the Department of Energy, and the National Science Foundation, will be responsible for conducting semiconductor research, particularly in prototyping of cutting-edge chips, in accordance with a national strategy developed under a newly established Subcommittee on Microelectronics Leadership (SML). CHIPS+ appropriates $2 billion in FY22 for the creation of the NSTC.

The Department of Commerce, while required to coordinate with the Department of Defense, has significant freedom to decide the institutional structure of the NSTC. Previous analysis by the CSIS Renewing American Innovation project suggested that the NSTC should leverage the strategic advantage of expertise found in existing research and production facilities (such as those found in Albany, New York) while enhancing the potential of others and selectively investing in new capabilities, all connected within a networked structure.

Semiconductor assembly, test, and packaging (ATP) is an emerging niche in the semiconductor supply chain which involves the complex processes of integrating chips into larger electronic components, verifying their functionality, and encasing them in protective modules. Similar to chip manufacturing, ATP has become a target for specialization by firms across the world, with governments and national industries racing to secure leadership in this burgeoning market. The Advanced Packaging Manufacturing Program (APMP), to be led by the National Institute of Standards and Technology (NIST), is Congress’s answer to achieving competitiveness in ATP in the coming years. In FY22, $2.5 billion is appropriated for the establishment of the APMP.

CHIPS+ appropriates $500 million toward other related programs under the Department of Commerce, specifically for NIST to create its own microelectronics research program and for the creation of a Manufacturing USA institute focused on semiconductor manufacturing.

The CHIPS Defense Fund, which is appropriated $2 billion from FY23–FY27 ($400 million per fiscal year), is a fund meant to advance defense priorities related to semiconductor manufacturing. In coordination with the Departments of Commerce, Energy, Homeland Security, and the Director of National Intelligence, the Department of Defense is to establish one or more consortia of private companies to facilitate the production of secure semiconductors essential for national security, intelligence, and critical infrastructure applications. 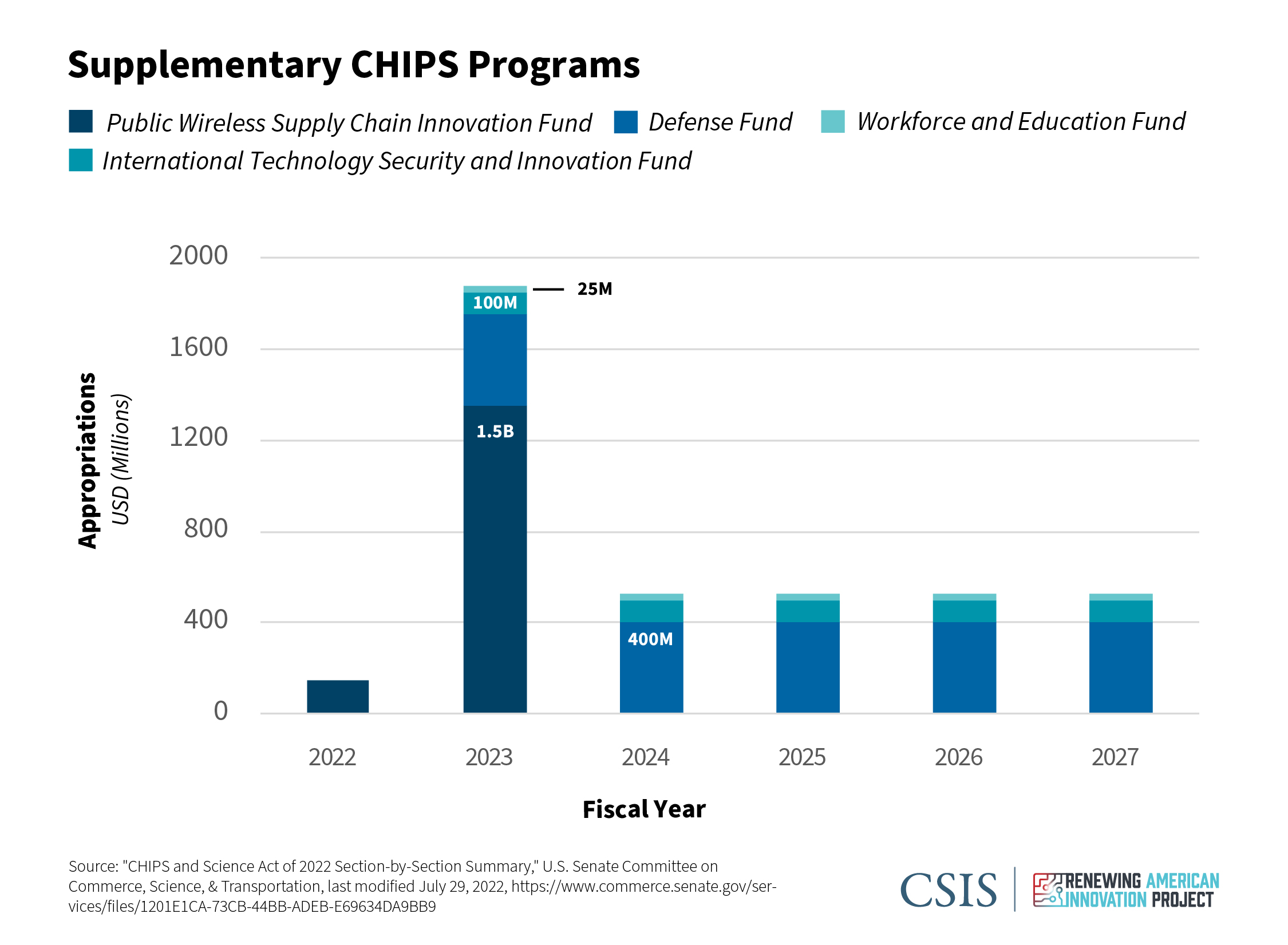 To address short-term labor and skills shortages which will hinder the development of onshore semiconductor manufacturing capacity, Congress has appropriated $200 million ($25 million per fiscal year) through the National Science Foundation (NSF).

$500 million from FY23–FY27 is appropriated for the creation of the CHIPS for America International Security and Innovation Fund. The fund is to support the activities of the Department of State, in consultation with the U.S. Agency for International Development (USAID) and the U.S. International Development Finance Corporation, in coordinating with international partners for the responsible and secure development of semiconductors, telecommunications, and other emerging technologies and their supply chains.

Q3: What will be the effects?

A3: Semiconductors are an essential technology supporting U.S. competitiveness in emerging technologies and ensuring the nation’s security. In a report published by Data for Progress, researchers estimate that the CHIPS Act would create or preserve a total of 513,630 jobs between 2022 and 2026. The funding from the CHIPS Act would also help to create a steadier supply of semiconductor chips, thus ensuring the prices of automobiles and other technologies or devices will not rise significantly due to shortages.

The bill also paves the way for the funding and establishment of semiconductor fabs in several states across the country. Semiconductor manufacturers such as Samsung, TSMC, Intel, and GlobalWafers have recently announced new plans to build fabrication facilities in the United States. For example, Samsung recently announced the prospect of investing nearly $200 billion for 11 new chipmaking plants in Texas over the next two decades. Intel has announced that the scope of its planned investment in chips facilities in Ohio depends on receiving federal funding from the CHIPS Act. With the funding provided, the company could invest up to $100 billion into eight fabs over the coming years. Additionally, TSMC officials announced plans to build a next-generation chip facility in the United States earlier this year, its first in over 20 years. Ideally, the CHIPS Act would provide such incentives for offshore manufacturers.

While CHIPS has been long anticipated and will make a positive impact, it is not a policy panacea. Other nations are also taking active steps to support their domestic semiconductor industries. Indeed, the $52 billion envisioned under CHIPS is an amount less than a third of China’s semiconductor subsidies. The European Union, South Korea, and Japan are also in the process of passing their own chip incentives. Securing the future of the U.S. semiconductor industry will require a sustained effort with significant long-term investments in the semiconductor industry. 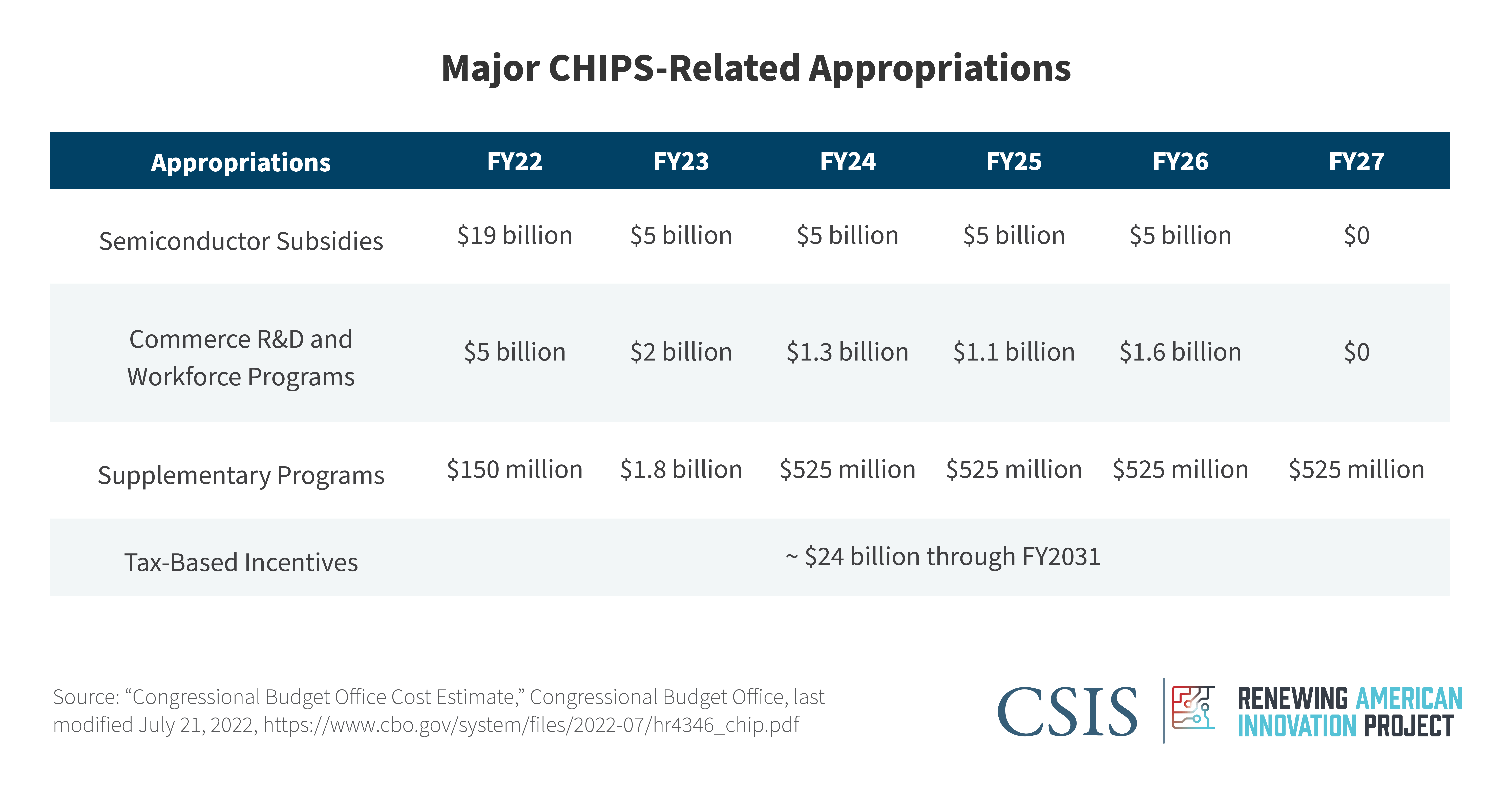 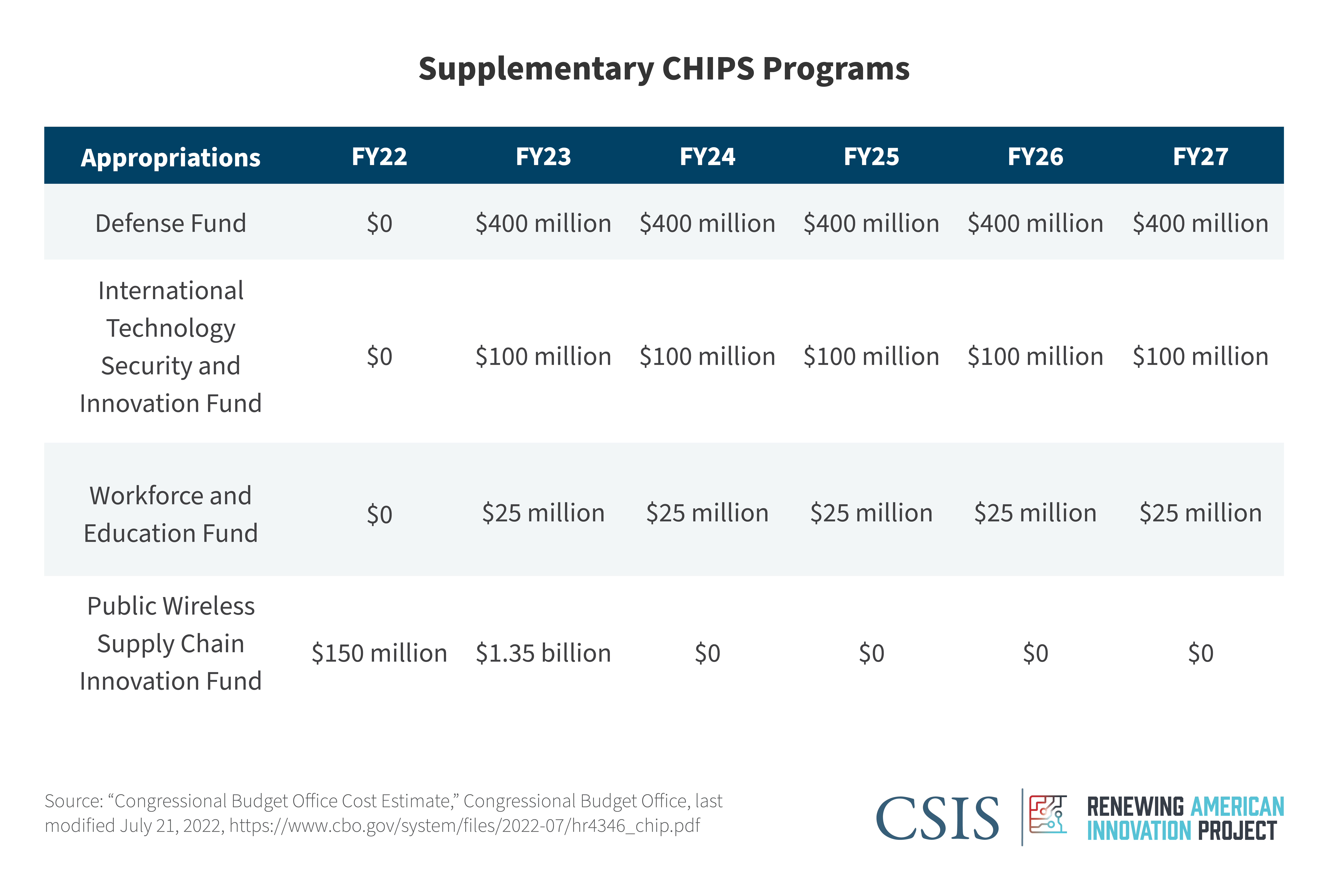