India is in the eye of the energy transition storm. No other country must balance the challenges of implementing so many power sector reforms while expanding energy access to hundreds of millions of people. All of this is happening in a time of unrivaled innovations in energy technologies and rapidly changing business models and economics of energy production and delivery. The International Energy Agency’s (IEA) recently released India Energy Outlook reaffirms this, stating that India is “at the center of global energy demand moving forward.” With understandable pressure to bring bold targets to the table at this year’s UN climate change conference (COP26), India may join other Asian nations in announcing a net-zero carbon emissions target. Leveraging the IEA’s latest scenarios, partner nations need to be prepared to design bilateral energy partnerships that meaningfully meet India’s net-zero moment. For the United States, here are some steps to forge a new partnership.

U.S.-India energy cooperation has a long history and has seen cooperation on many fronts, including civil-nuclear cooperation, the fossil fuel sector, as well as a focus on renewable energy technologies and grid infrastructure. These efforts have served their purpose well, given the time in which they were operating. However, the changing landscape of energy economics and technological and business model innovation, along with the urgent imperative to act on climate, requires re-casting the pillars of cooperation with some new strategies that will benefit both parties in navigating the transition together. 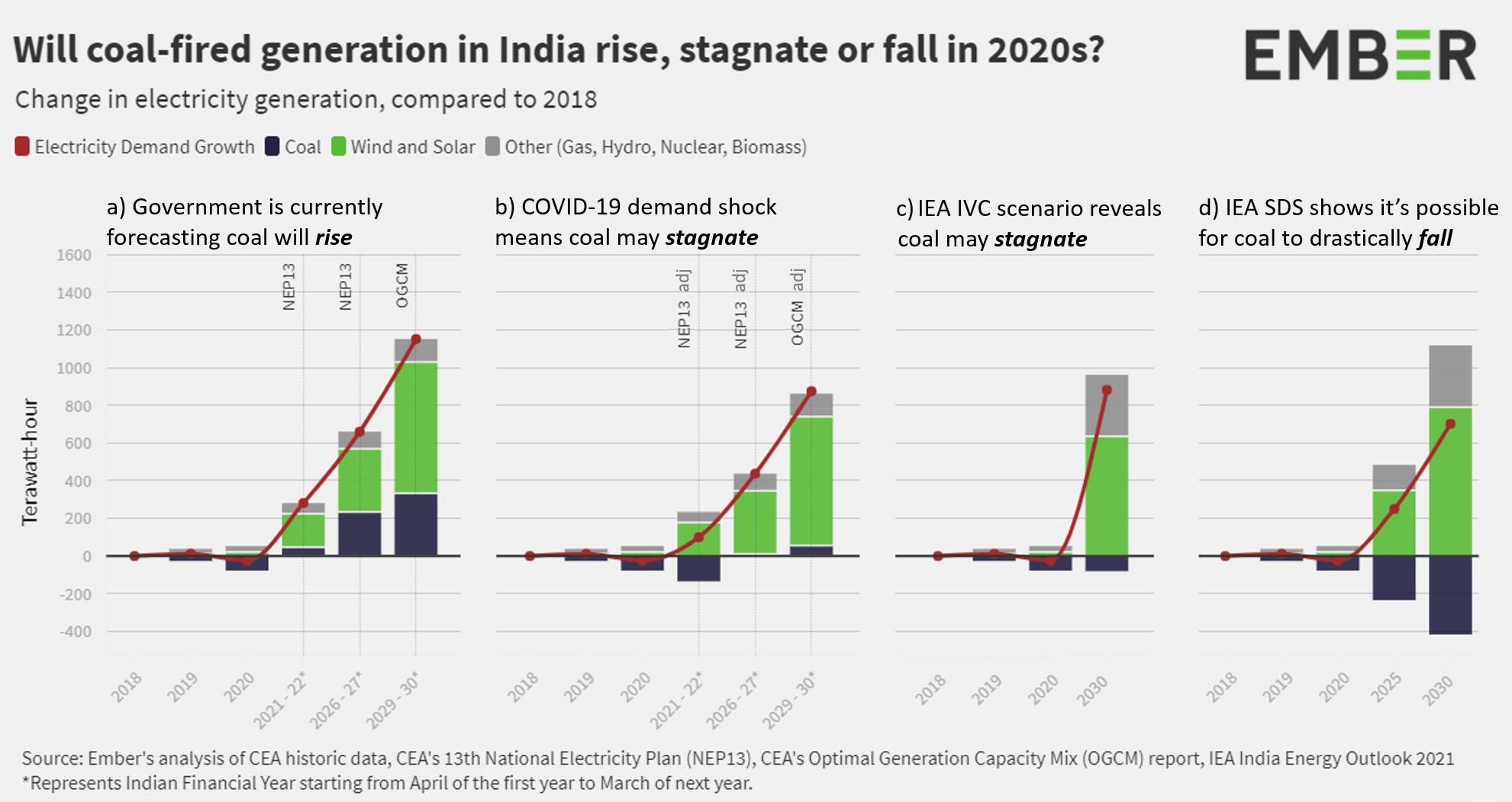 As it is, the United States does not have a Ministry of Coal to match dialogue with India’s, and its own coal industry has seen rapid decline. While there is of course still a need to engage India’s coal sector in water and air pollution management, power plant flexibility, and efficiency of resource use, a stronger partnership would be one that aid’s India’s coal sector, and her coal-rich states, in making a transition. Such a dialogue could focus on:

Furthermore, India is about to release a national hydrogen energy mission. The possibilities of leveraging gas infrastructure assets to distribute and use renewable-energy-produced “green” hydrogen could be the best way to help India’s energy transition while still providing a role for India’s oil and gas industries in the transition and without suffering huge losses from investments made in gas infrastructure. The market creation possibilities for green hydrogen will likely increase, as this fuel could be a way to decarbonize the industrial sector. This calls for broadening the discussion and focus of the current U.S.-India Gas Task Force to include hydrogen-sector stakeholders, including industries such as cement and steel that can decarbonize through the use of this fuel.

Establish a Platform to help Electrify Everything

The IEA states that in order to meet electricity demand over the next 20 years, India will need to add a power system the size of the European Union to what it has now. Demand will surge thanks to millions of households purchasing new appliances, for example, air conditioning units. In addition, as hundreds of millions of more vehicles are added to Indian streets, India’s oil imports will swell to meet over 90 percent of its demand. With the success of the Saubhagya Initiative, which helped extend utility networks to virtually all homes across the country, a commitment to electrify everything (and do so efficiently) could help mitigate India’s pollution footprint while saving the country billions of dollars annually. In addition, it would help state-owned utilities spur new business verticals and stimulate much-needed demand to purchase electrons through the newly expanded service areas. A new platform made up of various partner nations, industries, and experts to help India electrify everything would:

India has several bilateral energy research and development collaborations with countries around the world. To establish the knowledge economy of the emergent energy sector, particularly of those technologies upon which India will rely to meet its net-zero ambitions, countries like the United States should ensure they support joint R&D efforts in the following five areas: solar technologies, wind technology, energy storage, electric vehicles, and hydrogen. In addition, helping create innovation ecosystems at the state and local level are critical to leveraging India’s vibrant research ecosystem, venture capital networks, and industries.

Energy has always been a key pillar of U.S.–India cooperation. The focus of this partnership has always shifted to match India’s needs, be it civil-nuclear cooperation, helping improve thermal power plant efficiency, supporting the growth of the renewables industry, or meeting domestic gas demand. Now India might be on the verge of taking a leap with its energy transition sooner than many expected, and at a tempo some might consider risky. But officials know that the risks of inaction and the opportunities that are unlocked from taking the leap are even greater. The recommendations explored here not all-inclusive for how a country like the United States might partner with India’s energy transition. Indeed, there are many more government and non-government partners that can offer a “whole of U.S.” engagement with India on the matter. These recommendations offer a template for how to take that leap with India and meet its net-zero moment.

Kartikeya Singh is a senior associate (non-resident) with the Wadhwani Chair in U.S.-India Policy Studies and the Energy Security and Climate Change program at the Center for Strategic and International Studies in Washington, D.C.