Midterm Election Results—What Did It Mean for Trade?

This week’s topic is obvious. The United States had midterm elections last week. What did it mean for trade? That is really two questions: what did the voters say about the president’s trade policy and what, if anything, is likely to change when the new Congress convenes in January? On the first question, what did the voters say, the answer is not very much, validating the long-held view among pollsters that trade is normally a low-intensity issue. That is, voters have opinions about trade and trade agreements if you ask them, but if you ask them, “What are the three biggest problems facing our country?”, trade is usually number seven or eight (sadly, beating out only climate change). It has not been a dominant issue in our electoral politics for a long time, although there are always particular parts of the country where it will be dispositive.

This year saw that same tendency—in both directions. Senator Heidi Heitkamp (D-ND) made opposition to the president’s trade policy a key element of her campaign, and she lost. So did Senator Claire McCaskill (D-MO). Missouri and North Dakota farmers apparently are either not yet ready to lose faith in the president or simply thought other issues were more important. Similarly, a Republican candidate in northeastern Minnesota flipped that seat from Democratic to Republican. That part of the state contains the Iron Range where the steel tariffs are popular. Mike Bost (R-IL) held on to his seat in southern Illinois in part because the district includes Granite City, where a steel mill has reopened in the wake of the president’s tariffs. And, of course, Sherrod Brown was reelected in Ohio, although everyone knew that was going to happen.

On the other hand, two congressional seats in Iowa—the epicenter of farmers damaged by Chinese, Mexican, and Canadian retaliatory tariffs—moved into the Democratic column, as did one in Kansas, along with the governorship, and one in Oklahoma. There were other issues in all those races, as there always are, but it is hard to believe that trade did not play a role. There were also a number of seats in Pennsylvania that flipped to the Democrats, although that probably had more to do with court-redrawn district boundaries designed to eliminate gerrymandering by the legislature in favor of Republicans. Beyond that, conventional wisdom and regional differences prevailed as usual. Coastal incumbents with pro-trade platforms were largely reelected, as were Rust Belt incumbents with trade-skeptical platforms. No news there.

One unknown is the extent to which the president influenced the trade-related outcome by switching his primary focus to immigration late in the campaign. He had initially signaled that he wanted his trade policy to be an issue, and he regularly mentioned it at his rallies, but it became clear in the final three weeks that he was focused far more on immigration and the slow-moving caravan of migrants than he was on trade.

So, aside from isolated cases on both sides, the midterm election results were fairly conventional from a trade perspective. Some candidates talked about it; some did not. And the voters mostly made up their minds based on other issues.

The other question—what happens now—is harder to answer. On the personnel front, it is too early to say much beyond noting that there will be lots of changes. Nine Republicans on the Ways and Means Committee will not be returning (for various reasons including retirement or running for another office in addition to defeat), and there will be many new Democrats added to the committee to reflect their majority in the full House. One interesting sidelight is a potential fight between Reps. Ron Kind (D-WI) and Bill Pascrell (D-NJ) to chair the Trade Subcommittee. Kind has been a leader of the pro-trade Democrats, and Pascrell has long been a critic of trade agreements, so who is chosen may say something about what direction the party plans to take.

On the Senate Finance Committee, there is less numerical change—two Republicans leaving and one or two Democrats (depending on the outcome of the contest in Florida), but there will be a change of chairman due to Senator Hatch’s retirement. There has been some talk that perhaps the leaders will use this as an opportunity to shrink the committee back closer to its traditional size of 20 from its current 26, in which case there would be no new members, but I suspect they will be unable to resist the chance to award a couple of plum positions to favored colleagues.

Finally, while the media has noted the fairly large number of pro-trade Republicans who will not be returning, less has been said about the views of the new arrivals. Here at CSIS, we took a quick look at that by examining public statements of the Democratic House winners. So far, it seems that 17 of them took pro-trade positions, 4 were skeptics, and for 11 we found no position. Of course, trade votes are generally on specific agreements rather than vague policy positions, so predictions are risky, but a first look suggests at a minimum that many of the incoming Democrats will be open-minded on trade and that it would be a mistake to start planning the funeral for the United States-Mexico-Canada Agreement (USMCA). Once the smoke clears, I will have more to say about the makeup of the new Congress and the chances of getting the USMCA through. 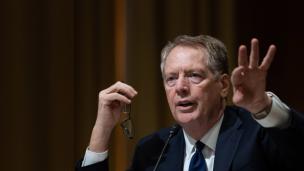 Unpacking Expanding Export Controls and Military-Civil Fusion
By William Alan Reinsch, Jack Caporal
May 14, 2020
View all content by this expert