Nation Building by Any Other Name

The United States may not be interested in nation building any longer, but nation building remains interested in it. Over the past 15 years, nation building became synonymous with the wars in Iraq and Afghanistan, a perception that ignores the wide spectrum of failed and failing states that may require support from the international community. The United States must continue to lead—or at least provide significant support—on these challenges. And, although polling suggests people are tired of “open-ended war,” many still perceive terrorism and other transnational threats as acute security challenges. Many of the biggest security threats the United States faces—including terrorism, pandemics, the global refugee crisis, and international drug trafficking—are incubated in weak, failing, and failed states. The United States must respond to challenges “over there” so that these problems do not grow worse in unstable regions threatening allies. Most of the nation building that the United States does and will do is focused on development outcomes. Military activity is a component but a more minor one than building infrastructure, providing health care, or building the capacity of the local government. If the term “nation building” is unacceptable then “state building” or “support for fragile states” should be considered. The United States, its allies, and the multilateral development banks (MDBs) need to recognize that the challenges of failed, failing, and post-conflict states remain an international priority, and all must find ways to strengthen their ability to work in these contexts.

Nation building is not new. It is characterized by a number of activities that the United States has carried out for decades with varying degrees of success in many areas around the world. The Marshall Plan and other early foreign aid programs of the 1940s and 1950s exemplified this investment as the United States sought to rebuild war-ravaged countries in Western Europe and East Asia. The states that benefited—Germany, Japan, France, South Korea, and Taiwan—became pivotal allies in the Cold War and beyond. With the end of the Cold War, the United States and its allies extended aid and assistance to the former Eastern Bloc nations as they sought to build democratic, free-market societies and economies. This investment paid off: Poland is now the fourth-largest economy in the European Union, and the other former Warsaw Pact countries are now part of NATO and the European Union.

Despite its obvious early successes, nation building has earned a poor reputation in the United States in the last several decades. Condoleezza Rice, as a spokesperson for George W. Bush during the 2000 presidential election, famously criticized the concept in an article in Foreign Affairs. She wrote the article in response to the interventions—and perceived overreach—of the Bill Clinton administration in Somalia, Haiti, and the Balkans. Rice changed her mind after having served in government for eight years—including during the 9/11 attacks, which were perpetrated by terrorists living in the failed state of Afghanistan—realizing that the United States needs to have the ability to address these challenges. The two Bush National Security Strategies ultimately recognized the dangers of failed and failing states. In 2008, she concluded that the Bush administration had to recognize that “state building” (nation building by another name) was a necessary function of U.S. foreign policy.

Since the end of the Bush administration, nation building has come under sustained criticism from both sides of the political spectrum. President Barack Obama campaigned against the war in Iraq in 2008 and then adopted a far more restrained posture than his predecessor. This was a clear example of conflating all nation-building activities with the wars in Iraq and Afghanistan and fearing a repeat. In some instances this may have been warranted, but in others (e.g., Syria, Libya, and Mali) it might have created broader problems than anticipated at the time. More recently, nation building was widely criticized during the 2016 presidential campaign by candidates from both sides of the aisle. Senator Bernie Sanders, Senator Rand Paul, Senator Ted Cruz, and now-President Donald Trump all spoke against nation building. Trump gave a major foreign policy speech in which he said, “Our current strategy of nation building and regime change is a proven failure.” In his inaugural address, President Trump echoed these sentiments.

Current political opposition to nation building is based largely on a widely held belief that it means open-ended or inconclusive commitments that require significant numbers of U.S. troops, tens of billions of dollars in security and economic assistance, and an ongoing security presence by the United States. However, U.S. efforts at nation building go beyond Iraq and Afghanistan and include more limited support to address specific challenges. Under Plan Colombia, the United States made a decade plus commitment to Colombia to aid in ending its 40-year-old civil war and curbing drug trafficking. The United States sent military advisers, sold weapons, and provided intelligence and complementary economic assistance to support the much larger economic commitment the Colombian government made to achieve these goals. Military victories by the Colombian military and economic growth in Colombia ultimately forced the Revolutionary Armed Forces of Colombia (FARC) to the negotiating table, but this was 16 years after the original U.S. commitment began. The overall cost of U.S. involvement has been much lower than had the civil war continued unabated, and the United States gained a capable and willing local partner. 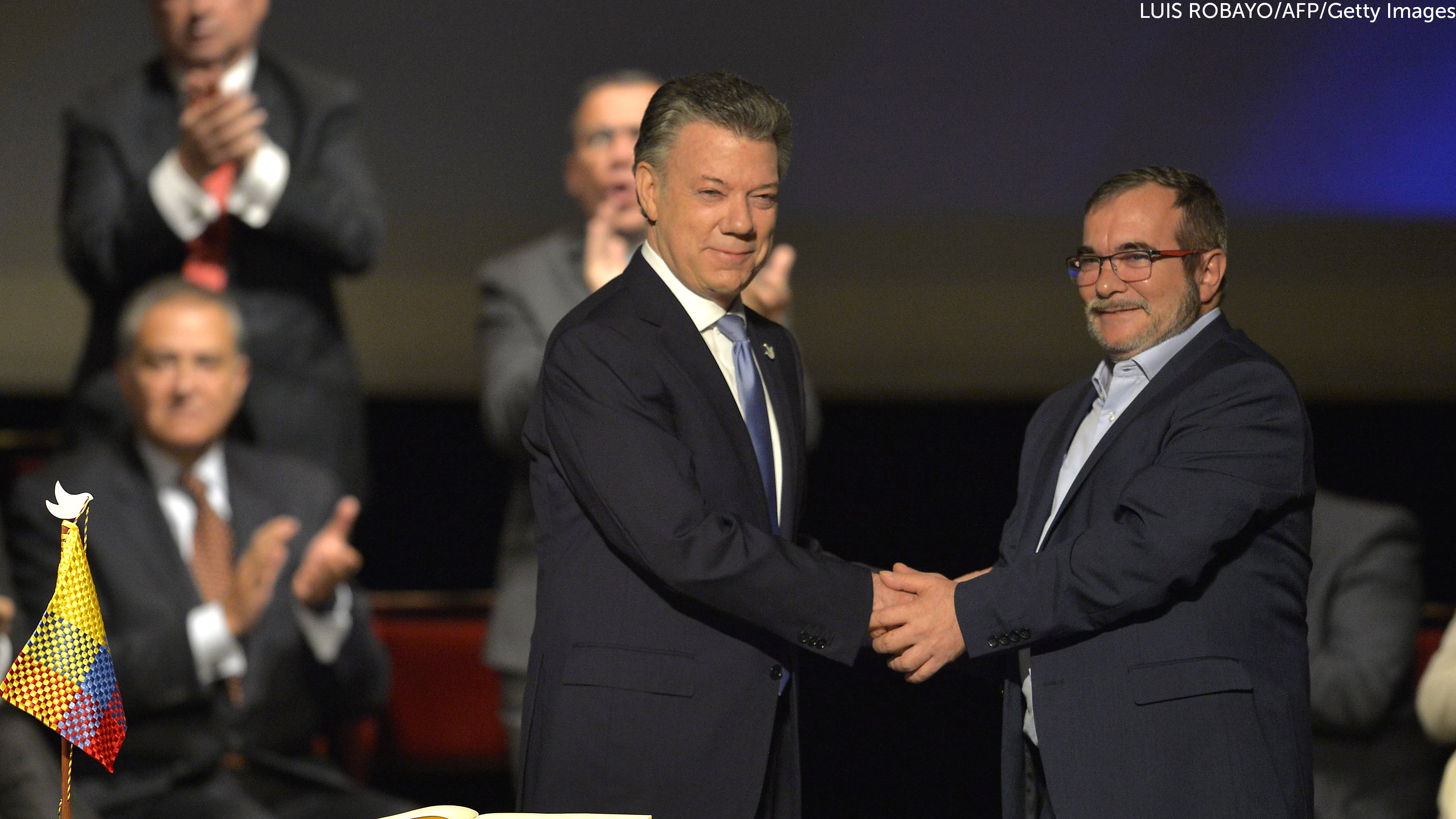 The overthrow of the Muammar el-Qaddafi regime in Libya is an example of when more nation building was required to avoid disaster. The Obama administration had good intentions to stop a potential genocide, but the light footprint and the unwillingness to put troops on the ground afterward brought chaos to a country already in turmoil. Former secretary of state Colin Powell’s dictum that “you broke it, you bought it” still stands. In an era when there is little appetite for putting “boots on the ground,” it is likely that a Trump administration will face a similarly complicated problem like Libya where nonintervention could result in a bloody civil conflict, but military intervention means you “own” the resulting situation. It is likely that the United States will confront similar challenges over the next four years. The potential collapse of the Venezuelan government, the continued refugee crisis in the Middle East and Africa, and ongoing challenges in the Democratic Republic of Congo, South Sudan, Central African Republic, or Burundi could all require a response from the U.S. government in the coming months and years.

Prosperity in much of the developing world is increasing. There are, however, around 30 countries (estimates vary) with limited government or constant conflict where many of the world’s poor live. These countries—home to the so-called bottom billion—will require support in the next decade, including emergency food and shelter; support for refugees; transitional assistance; pandemic response; reconstruction of houses and infrastructure; support for getting a government, including its military, police, education, and health functions, back in order; and catalytic support for private-sector activities, including agriculture. All of these activities constitute nation building.

The United States, its allies, and the MDBs need to be better prepared to confront ongoing problems and be poised to respond to emerging crises. An important step would be for the United States to consider a strengthened cadre of civilians who work in conflict zones and fragile states. At present, the State Department has the Bureau of Conflict and Stabilization Operations, and the U.S. Agency for International Development has the Office of Foreign Disaster Assistance and the Office of Transition Initiatives, all three geared toward working in these tough countries. Additional funding for these offices would improve U.S. capacity to work in fragile states. This recommendation has been made across administrations and by members of both political parties. To ensure U.S. allies are engaged on these issues, the United States should advocate for a new vice presidency for fragile and vulnerable states at the World Bank.

President Trump will likely face a series of challenges in the next four years: a pandemic crisis, a collapsed Venezuela sometime in the next 12 months, challenges in Africa, and important choices in Afghanistan. These crises are made worse by the weakness of the states in which they occur. The administration must be willing to engage in what may not be politically popular, as a U.S. response will be critical to ensuring crises are mitigated when they occur and are prevented wherever possible. Nation building is defined by a set of activities that will only grow more important in the future.

How to salvage the Summit of the Americas
The Hill | Ryan C. Berg, Daniel F. Runde
May 12, 2022
On Demand Event

An Exit Interview with Henrietta Fore
May 10, 2022
In the News

The Next Wave Is Not a Covid-19 Wave: Debt Sustainability in Developing Countries
By Daniel F. Runde, Frank Kelly, Romina Bandura
April 20, 2022
On Demand Event

Digital Transformation in the Western Hemisphere: An Aging Population
March 11, 2022
View all content by this expert