National oil companies (NOCs) are often portrayed as dinosaurs: big, slow-moving creatures that are unlikely to evolve. Many believe NOCs will ignore the energy transition until it is too late to adapt. But some of these companies—especially those with declining production and smaller reserves—plan to become more diversified energy providers. Two companies with ambitious transition plans are Colombia’s Ecopetrol and Malaysia’s Petronas. Examining their goals, challenges, and sources of strength can shed light on the road ahead for evolving NOCs. Their ability to pull off a transition has important implications for production and government finances in their home countries. And if these companies fail, other NOCs will find it even more challenging.

Ecopetrol and Petronas are continents apart but have a good deal in common. Both are integrated, well-managed NOCs. They generate substantial government revenue; hydrocarbons typically account for up to 20 percent of Colombia’s government revenue and 20 percent or more of the state budget in Malaysia. Colombia and Malaysia have relatively small hydrocarbon resources and mature production, although Petronas has a much larger gas endowment and is a key player in liquefied natural gas (LNG). Both NOCs, especially Petronas, began to invest abroad years ago to diversify and help offset potential declines at home. They have stronger incentives than most state oil companies to seek new revenue sources. 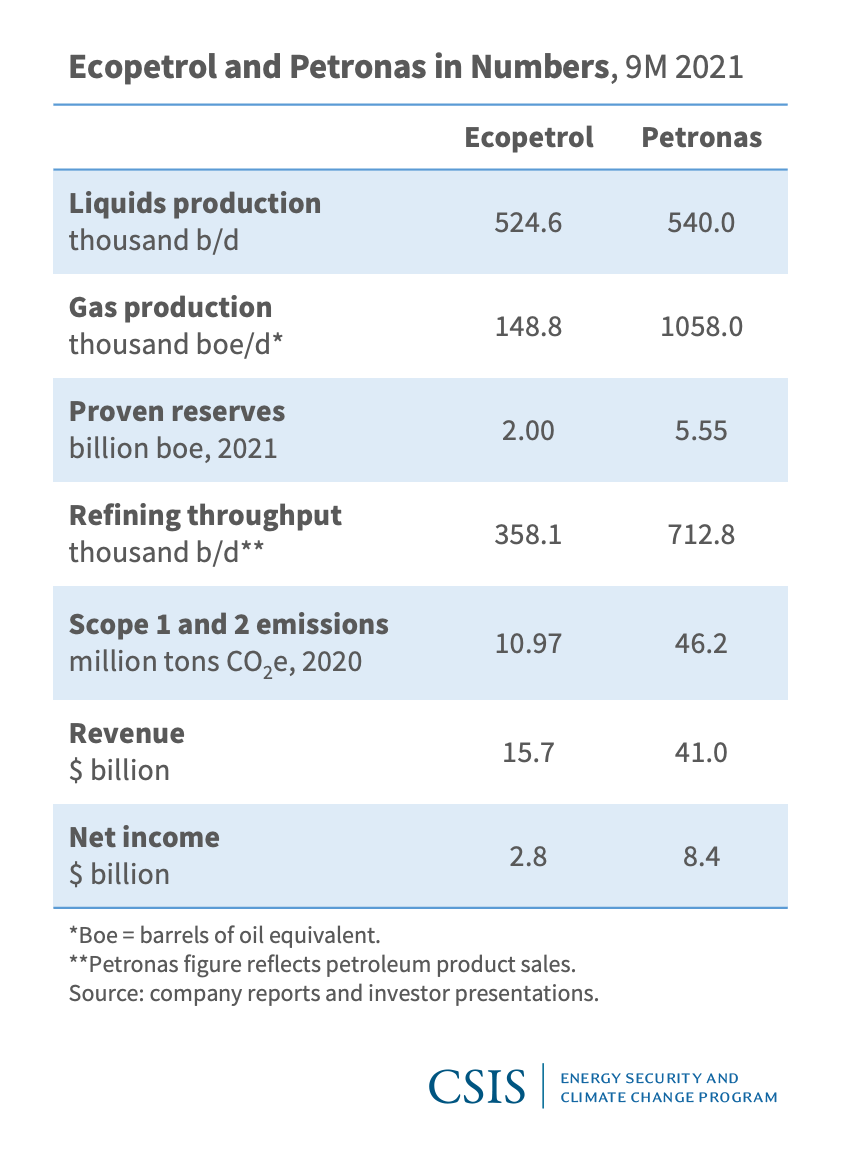 Ecopetrol and Petronas have various strengths, including strong state support, access to capital, and engineering and project management expertise. Still, it is no small task for an NOC to protect its core business while pivoting to new areas. Environmental, social, and governance (ESG) pressures on the industry pose challenges for emissions-intensive parts of their business: heavy oil in Colombia and LNG exports from Malaysia. More importantly, their forays into solar, wind, electricity transmission, and other sectors raise the risk of bad bets on emerging industries. To pull off a transition, Ecopetrol and Petronas will need to take bigger risks, acquire new personnel and skills, and in some cases, resist government pressure to solve all the energy transition challenges in their home countries.

Ecopetrol has the most ambitious transition agenda of the Latin American NOCs, partly due to its limited resource base. Regulatory and licensing changes nearly 20 years ago revitalized investment and production in Colombia, and the country has successfully extended its output. Favorable fiscal terms continue to attract investment, including in offshore exploration. But Colombia’s crude oil production has dropped from nearly 900,000 barrels per day (b/d) in late 2019 to 750,000 b/d at present. Ecopetrol just increased its proven reserves and anticipates it can raise output throughout the next decade. But this depends on both offshore and onshore exploration results, and opposition to hydraulic fracturing in Colombia could block Ecopetrol and others from developing unconventional resources. Another challenge for Ecopetrol is its heavy crude resources. ESG-conscious oil and gas companies are less likely to partner with Ecopetrol to develop these emissions-intensive resources and more likely to sell off producing assets.

Ecopetrol’s energy transition targets are also linked to national climate goals. Colombia aims to reduce greenhouse gas emissions (GHG) by 51 percent by 2030 over a business-as-usual scenario. The government wants to expand renewable energy (not including hydro, which accounts for nearly two-thirds of electricity generation) to 12 percent of generating capacity by the end of this year. Ecopetrol has been enlisted to help the state achieve these goals. 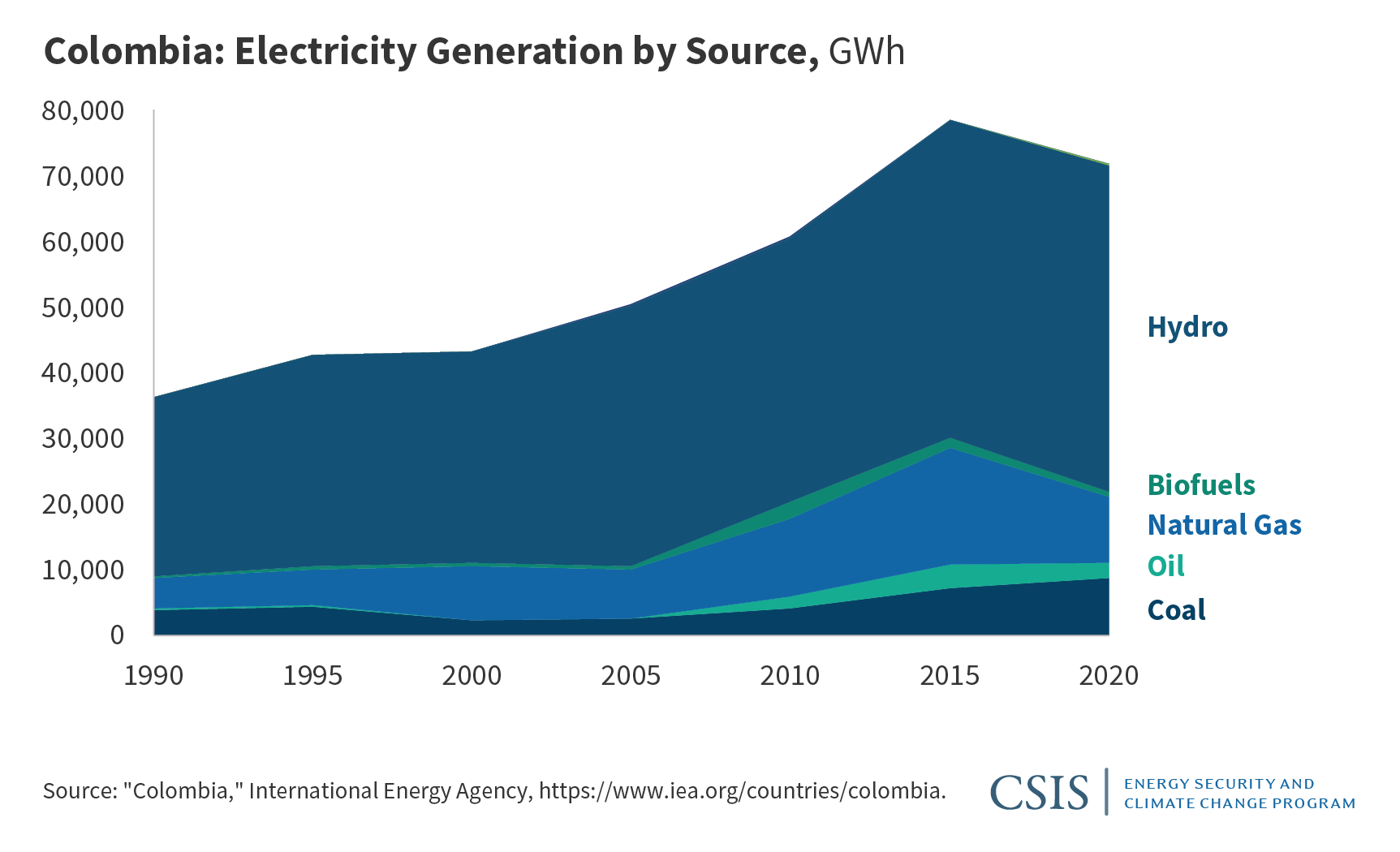 A third driver for Ecopetrol’s transition strategy is investor pressure. About 11.5 percent of Ecopetrol shares are publicly owned, while the state holds the remainder. Domestic investors want the NOC to focus on its core business and protect its revenue base, but they and international investors have challenged Ecopetrol to adopt more ambitious climate goals and bolster its resilience.

In March 2021, Ecopetrol was the first Latin American NOC to adopt a net-zero target. The company aims to cut its Scope 1 and 2 emissions by 25 percent by 2030 (from 2019 levels) and to achieve carbon neutrality for Scope 1 and 2 by 2050. Ecopetrol is one of the few NOCs with a target encompassing Scope 3 emissions, or those produced from the end-use of its products. It aims to cut combined Scope 1, 2, and 3 emissions in half by 2050. To meet its Scope 1 and 2 goals, Ecopetrol will rely on the same toolkit as many other oil and gas companies. It plans to eliminate routine gas flaring by 2030, implement leak detection and repair programs to cut venting and fugitive emissions, and find ways to use less energy in its operations.

Larger shifts in Ecopetrol’s energy business present more challenges. The company plans to add 400 to 450 megawatts (MW) in renewable energy capacity by 2024, mainly from solar projects. It aims to allocate 7 to 8 percent of its 2022–2024 spending to low-carbon energy. It has longer-term interests in geothermal and wind energy, and like most NOCs it has expressed interest in blue and green hydrogen. Already some risks are apparent. Last year Ecopetrol acquired the state’s 51.4 percent stake in electricity transmission company Interconexión Eléctrica SA (ISA) for $3.7 billion. ISA operates transmission assets (as well as toll roads and telecommunications) in six countries, including Colombia, Peru, Brazil, and Chile, opening the possibility for more cross-border transmission that would smooth the integration of renewable energy in Colombia. Ecopetrol claimed the deal would aid its transition efforts, complementing its oil and gas business with growth potential in the power sector. But critics suggested the state engineered the tie-up to generate cash and meet the government’s fiscal needs.

The ISA deal illustrates a few challenges for NOCs pivoting to new areas. Governments sometimes turn to NOCs to invest in priority projects, which can dilute their operational focus and detract attention from core assets. These risks may grow in the energy transition. NOCs like Ecopetrol must meet their core mandate of delivering revenue to governments, but they also face pressure to expand into renewable energy, electricity generation, and other low- or no-carbon technology areas with which they have little experience. Ecopetrol’s transition strategy seems to play to its strengths, and it has been more proactive than other state oil companies in the region. But this evolution will stretch its human resources and could create material risks for the company and the state.

Petronas was the first Asian NOC to announce a net-zero target for Scope 1 and 2 emissions, and it has a growing interest in renewable energy. A wholly state-owned company, Petronas does not face climate-related pressure from private investors, but a limited resource base and long-term challenges for gas have prompted a strategy shift. The company aims to lower its emissions intensity to remain a competitive LNG supplier and wants to diversify its revenue base by moving into renewable energy and potentially hydrogen.

Petronas has disclosed more emissions data in the past few years, and like Ecopetrol, it will rely on flaring and venting reductions and energy efficiency measures to reduce emissions intensity. Petronas has also used its convening power to share ideas on managing methane emissions with other Southeast Asian NOCs. As a significant LNG player, Petronas aims to cut emissions from liquefaction facilities. The LNG Canada project (where Petronas holds a 25 percent equity stake) will source clean hydropower, and Petronas is exploring options to provide hydropower to its Bintulu LNG complex in Malaysia. 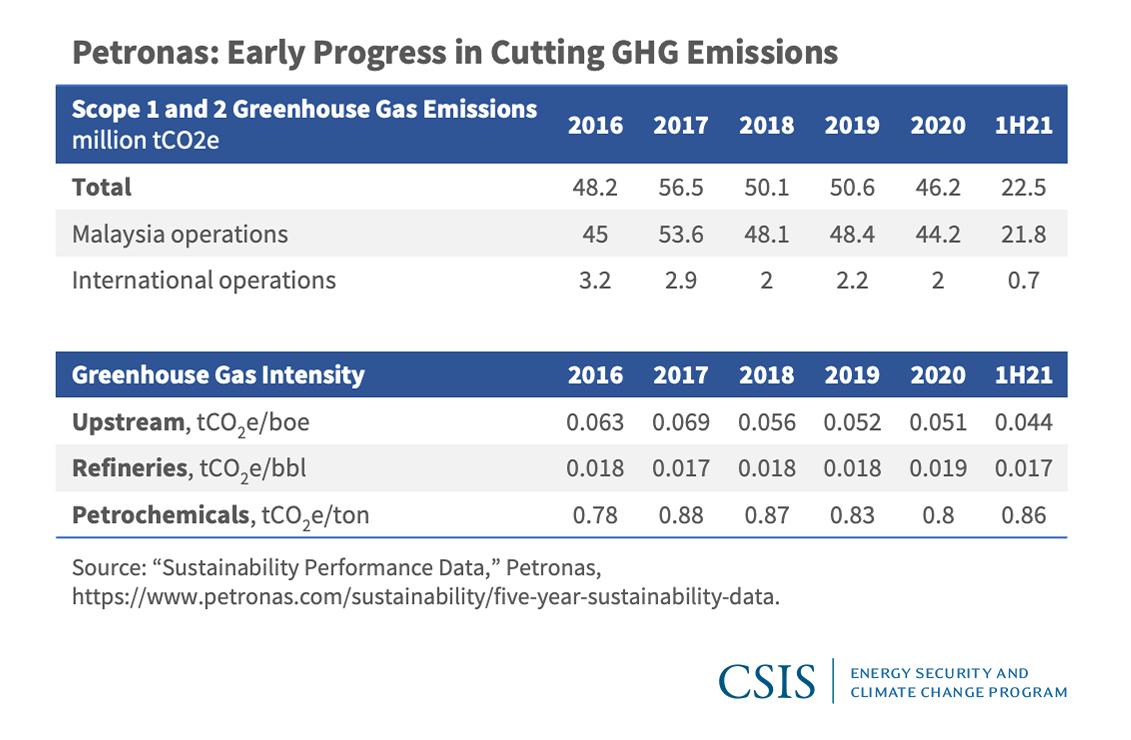 In 2018 Petronas created a business unit (now called Gas + New Energy) to expand into renewable energy and carbon capture, utilization, and storage. The company acquired Indian firm Amplus Energy Solutions in 2019, and its M+ subsidiary provides solar energy and battery storage solutions. Petronas aims to increase its renewable energy capacity to 3,000 MW by 2024 (from its current capacity of 762 MW). Over a longer time horizon, Petronas is looking to hydrogen, exploring the potential for green hydrogen and ammonia projects in Malaysia and blue hydrogen developments in Canada. Last year the NOC announced it would allocate 9 percent of its capital expenditures to renewables from 2021 to 2025—a small but growing share.

Some elements of Petronas’s net-zero strategy are less defined. The company aims to cap greenhouse gas emissions from operations in Malaysia by 2024 but lacks a similar target for its operated assets abroad. Its 2050 carbon neutrality pledge notes it will rely on carbon offsets to balance “the remaining Scope 1 and Scope 2 GHG emissions” from operated assets, including energy-based and forest-based offsets. But the underlying carbon accounting for such pledges—especially energy-based offsets—is questionable. Petronas has sold several carbon-neutral LNG cargoes but has not revealed much detail about the emissions accounting or quality of carbon offsets underpinning this trade.

It is early days for Petronas’s transition plan, but a few elements are worth highlighting. First, Petronas management is driving the strategy, as opposed to private investors or even the Malaysian government. Petronas is not immune to pressure from lenders and capital markets; it has several listed subsidiaries, and its extensive partnerships require the company to move with industry trends. But it shows that entirely state-owned companies can adopt proactive strategies. Second, in seeking to cut emissions intensity at liquefaction facilities and offer carbon-neutral LNG, Petronas is anticipating how buyer demands will change in a carbon-constrained market. NOCs that do not make similar adjustments will lose a competitive edge.

Early Movers in the Energy Transition

Why does the fate of these two NOCs matter? First, the success or failure of NOCs has big fiscal and political implications. NOCs are often the largest source of revenue for their governments, and they are key employers. If they falter, the economic stakes are considerable. If well-managed NOCs with strong balance sheets (Petronas held $37.8 billion in cash as of 4Q 2021) and good access to capital struggle in new energy, others will probably fare worse. 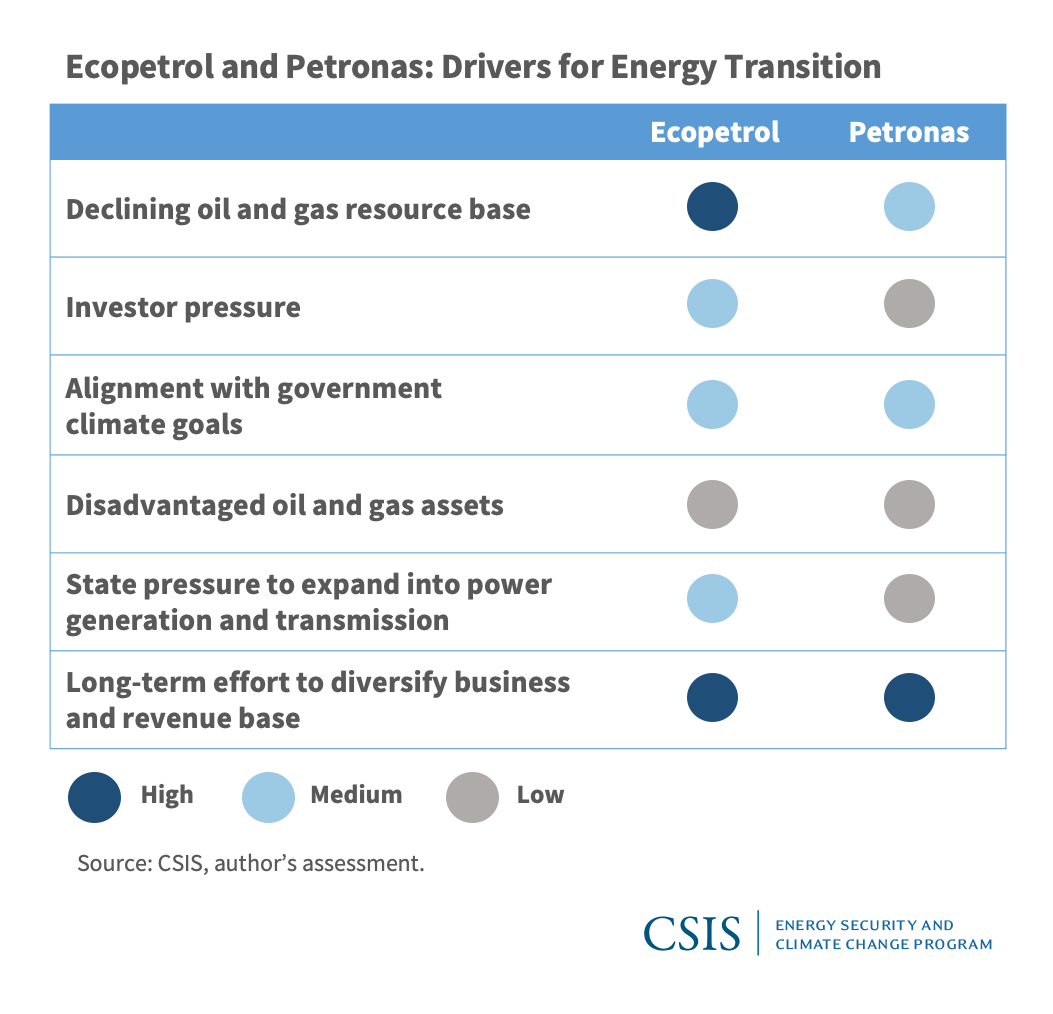 Second, Ecopetrol and Petronas show that the paths for NOCs in the energy transition will vary. Not all state oil companies have the resource base of Saudi Aramco or Rosneft, which can double down on oil and gas production in an effort to gain market share as the rest of the industry shrinks. The transition is more urgent for NOCs with modest resources, especially as their capital-constrained partners drift away and focus their portfolios elsewhere. It will take time for companies like Ecopetrol and Petronas to develop new business lines, making it all the more important to act now.

And last, the Ecopetrol and Petronas stories show the complexity of the energy transition for state companies. NOCs are unique institutions. Their roles and responsibilities vary, but most are tasked with safeguarding domestic resources, delivering revenue to governments, protecting energy security, and providing inputs to support economic growth. The long-term transition away from fossil fuels complicates all of these tasks. Ecopetrol and Petronas—early movers in the energy transition, but with legacy oil and gas operations that will continue for many years to come—will show how well NOCs can handle new mandates and stakeholder demands.