NATO and the Delicate Balance of Deterrence: Strategy versus Burden Sharing

There are good reasons that the United States should ask more of several key NATO allies, should seek to modernize NATO, and should seek to expand NATO’s role in dealing with terrorism and Islamist extremism. At the same time, none of these goals justify the sort of U.S. efforts that could undermine the balance of deterrence between NATO and Russia, increase the risk of Russian adventures in Europe, or increase a risk to a return to the level of tension in the Cold War and increase the risk of a serious conflict.

NATO does need to change, and put a more systematic emphasis on forward deterrence—in nuclear, conventional and irregular/hybrid warfare terms. It also can do more to fight terrorism and violent Islamic extremism, and carry out more effective out-of-area actions. The goal, however, should be to increase NATO’s deterrent and mission capabilities, and not simply to shift more of the burden to Europe or meet an arbitrary goal of spending 2 percent of the national GDP.

A hard look at the current calculations used in burden sharing indicate that it is ridiculous to compare total U.S. global defense spending to European spending on NATO. It also shows that meeting or not meeting the 2 percent of GDP has little or nothing to do with making the proper contribution to NATO. Similarly, effective efforts to increase deterrent, defense, and counterterrorism capabilities must be tailored to each particular state in both security and economic terms. Treating NATO’s European members as if they were some kind of bloc of states ignores massive differences between them, and is a totally dysfunctional view.

U.S. policy needs to be more realistic about the nature of burden sharing and the reasons why the United States cannot shift a major additional part of the burden of Western defense to Europe. Better bargains may be possible with several key allies, but radical shifts of effort are not credible, and threats to seriously weaken the U.S. commitment to NATO and European partners actively undermine U.S. strategic interests.

The United States needs to stop trying to pressure its European allies into major increases in military spending that are both impossible to achieve and have no clear strategic purpose or focus. It needs to stop using absurd comparisons of the "burden" that compares U.S. global military spending to NATO European spending, as if all U.S. spending was devoted to NATO. It needs to understand that the present goal of pushing European states to spend 2 percent of their GDP on defense is analytically ridiculous and has no clear strategic purpose.

The United States needs to work within the NATO alliance to emphasize the kind of improvements that will enhance NATO's deterrence on any form of Russian threat or military action, and to emphasize the limited kind of functions NATO can actually pursue in dealing with violent Islamist extremism, terrorism, and related forms of counterinsurgency. What NATO needs is a modern version of the kind of systematic assessments of the threat and national capabilities it carried out during its force planning exercise in the 1960s, and in is preparations for the Treaty on Conventional Armed Forces in Europe (CFE). NATO needs to set clear strategic goals, focusing on deterring Russia, and to create five year plans that can make steady and coherent progress, but adapt each year to changing requirements.

This major report is entitled NATO and the Delicate Balance of Deterrence: Strategy versus Burden Sharing, and is available on the CSIS web site at https://csis-website-prod.s3.amazonaws.com/s3fs-public/publication/170207_NATO_Delicate_Balance_Deterrence.pdf?OzYCRyUqdoBtKCp1QbyFb9gCmIJalvWQ 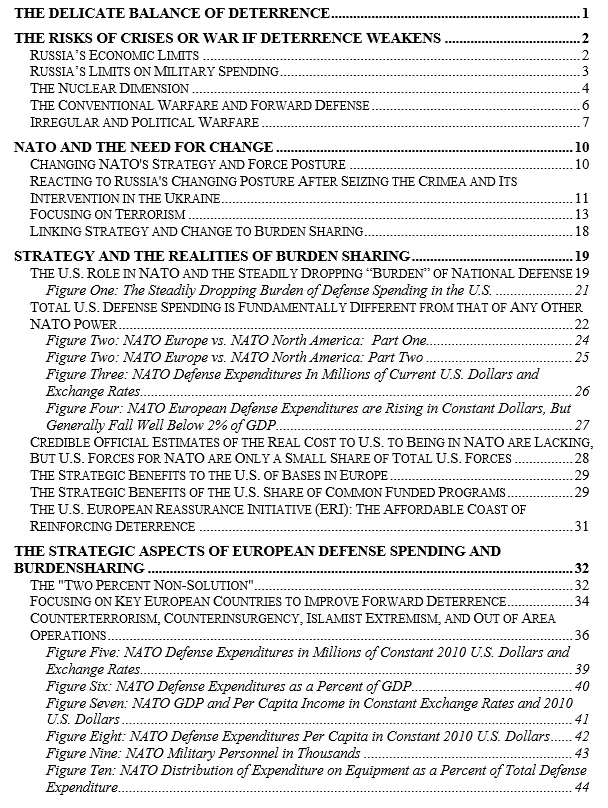 Downloads
Download PDF file of "NATO and the Delicate Balance of Deterrence: Strategy versus Burden Sharing"
Written By