NATO and Russia in the Black Sea: A New Confrontation?

This commentary is the second in a series of essays on the geostrategic importance of the Black Sea. Read the first essay here and the third essay here.
With the recent completion of the NATO Sea Shield exercise and NATO defense ministers’ approval of an enhanced force presence in the Black Sea, as Russian aircraft fly close to U.S. vessels operating there, this commentary focuses on the strategic implications of NATO’s military presence in the Black Sea. 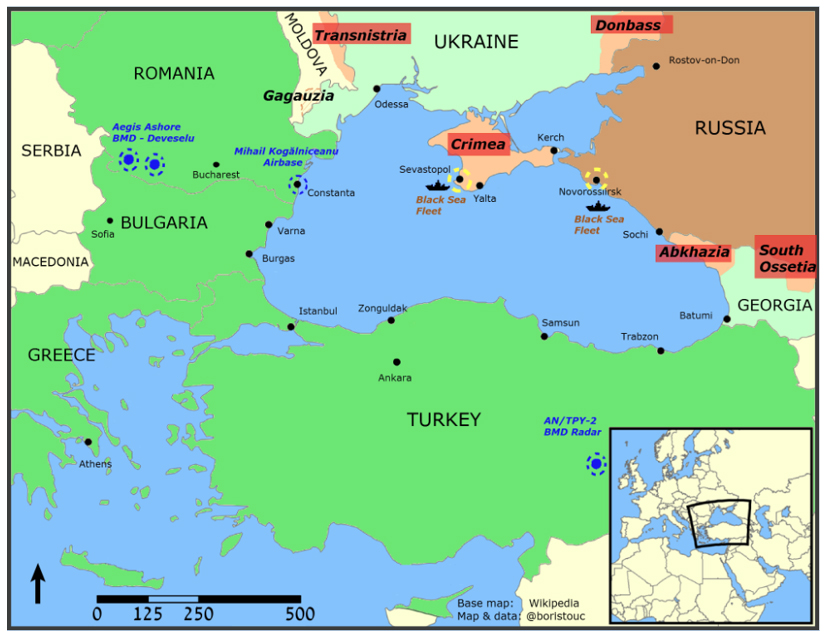 NATO has long described the Black Sea region as “important for Euro-Atlantic security,” but it was not until the July 2016 NATO Summit in Warsaw that NATO leaders pledged to increase alliance presence in the region through the creation of the Tailored Forward Presence (TFP). The February 15–16 NATO Defense Ministerial Meeting approved a maritime coordination function between NATO Standing Naval Forces and NATO allies in the Black Sea region to enhance cooperation and bolster NATO’s presence in the Black Sea region “on land, at sea and in the air.” The announcement was designed to “demonstrate transatlantic unity” and “send a clear message to any potential aggressor,” and it closely aligns with the U.S. decision to send an additional 500 forces to the Romanian Mihail Kogalniceanu (MK) forward operating base. These announcements reinforced the timing of NATO’s Black Sea exercise, Sea Shield 2017, which involved eight ships from Romania, two from Turkey, and one each from Canada, Bulgaria, Spain, and the United States. Russian officials recently have stated that they were examining all necessary actions to counter NATO’s buildup, describing NATO’s recent military exercises as “threaten[ing] its interest and security.” Some analysts suggest that the flyby of the USS Porter by two Russian Su-24 aircraft on February 10 in the Black Sea was seen as a possible response to these reinforcements.

Known as NATO’s Tailored Forward Presence, NATO’s presence in the Black Sea region encompasses the three domains of air, land, and sea. The land component is based in Craiova, Romania (Romania’s sixth-largest city), and involves a brigade-size multinational NATO force. The maritime component would consist of allied visits to Romanian and Bulgarian ports, enhanced training, conventional exercises of a limited scale, and situational awareness. The air component structure was first expected to be equally symbolic, but the United Kingdom recently announced it would deploy four Typhoon aircrafts to Mihail Kogalniceanu in 2017, which was symbolic in its own right as the United Kingdom renews its commitment to NATO following the UK referendum to leave the European Union.

The Black Sea region is also the location for one of NATO’s major missile defense elements. Romania is home to the Aegis Ashore ballistic missile defense site in Deveselu, which became operational in August 2016 (3 SM3 Block IB, 24 missiles). While the site is designed to counter ballistic missile threats emanating from outside the Euro-Atlantic area (which unambiguously excludes Russia), it is an important U.S. contribution to NATO missile defense, which is perceived by Moscow as challenging its strategic interests. Because Russia recognizes that the Deveselu site will shape the U.S. military presence in the region for the long term, it has repeatedly stated the site was a legitimate target, which in turn fuels calls to protect the site, exactly the military build-up dynamic that Russia seeks to avoid.

The Challenges of Preserving NATO’s Unity in the Black Sea

Unlike the Baltic states, which have argued for greater NATO military presence, the Black Sea littoral states (with the exception of Romania) have generally favored a lighter NATO footprint in their region, which is why NATO has struggled to find a common and credible vision for this strategic region. Because NATO has primarily focused militarily on the Baltic Sea region, some analysts see the Black Sea as an increasing vulnerability to the alliance.

Romania. While insisting on pursuing dialogue with Russia, Romania has worked energetically to increase U.S. and NATO force presence in the region. Bucharest has also looked for assistance from Poland, Lithuania, Latvia, and Estonia to ensure better force balance between the Baltic and Black Sea regions. Alternative multilateral groupings have also been developed, such as newly formed Bucharest Format, which brings together nine NATO members under Romanian leadership to follow up on recent NATO commitments. These nine members also share concerns about Russia’s military resurgence in Crimea and advocate for NATO’s continued enlargement, as well as the prioritization of increased defense spending to reach 2 percent of gross domestic product (GDP) as soon as possible. These NATO members are also seeking out more collaborative bilateral defensive relationships. Since 2009, Poland and Romania have strengthened bilateral cooperation. Although there have been few tangible signs of progress, both countries have pledged to each other equivalent participation (around 100 troops) in the multinational forces planned in their respective territories. Although the Bucharest Format and greater bilateral defense cooperation is generally positive, the first concern of these countries is their own territorial defense, and therefore resource availability to reinforce other NATO members will remain scarce. Baltic, Central European, and Black Sea NATO countries will continue to compete, as well as cooperate, in order to get allied support and attention in their respective regions.

Bulgaria. Despite its accession to NATO and EU membership in 2004 and 2007 respectively, Bulgaria is considered a more modest defense player whose military potential shrunk dramatically in the 1990s (1.2 percent of GDP allocated to defense spending in 2016) and whose political elite retain close political and business relations with Russia. Therefore, it is not surprising that there has been a robust political debate regarding the imposition of EU sanctions against Russia, as well as political difficulties when the United States or NATO seeks action that is perceived as anti-Russian. Despite Sofia’s reluctance to play a leading role in reinforcing NATO’s Black Sea presence, Bulgaria has offered to participate in the Multinational Framework Brigade stationed in Romania with 400 troops.

Turkey. Following the shoot-down of a Russian Su-24M aircraft by Turkey in November 2015, tensions between Turkey and Russia peaked in 2016 resulting in reciprocal sanctions and strong rhetoric. During this time of tensions, Turkey complained that the Black Sea was becoming “a Russian lake” and sought support from NATO for the region, as well as on its southern border where NATO air defense systems are deployed between Gaziantep and Antalya against potential air threats from Syria. However, there has been a complete turnaround in the Turkish-Russian relationship to one of enhanced cooperation, including signing a gas agreement in July (TurkStream) and military coordination in Syria. Turkey recently reinvited Russia to bid on a multibillion air defense contract, which has drawn concern from NATO (Turkey has previously invited China to participate in its missile defense program). In spite of these challenges, as well as growing tensions between Turkey and Europe over Turkey’s future domestic course, Turkey nonetheless supports a limited and scaled-up NATO reinforcement of the Black Sea region, as long as it does not impact its interpretation of the Montreux Convention.

NATO has a real but narrow path to respond to a “deteriorated security situation” (NATO Warsaw Summit Declaration) in the Black Sea region. The objective must be, in the most cost effective and militarily efficient way, to demonstrate NATO cohesion and deter Russia from pushing further in the region while simultaneously limiting the risks of military escalation. A balanced NATO presence in the Black Sea that doesn’t dramatically alter the balance of forces in the region will help convince the Kremlin that further military steps would be counterproductive and preserve room for dialogue.

The moderate level of military buildup in the region is an appropriate response to the current situation. The land component, as currently defined, should create few concerns because of its limited size while sending a clear message of solidarity and signaling a commitment to protect the territorial integrity of NATO members. The new naval coordination function between NATO Black Sea allies and NATO naval forces seems to imply a light-footprint mechanism that does not signal a major shift in the scale of NATO operations in the region. The preexisting political and military posture is maintained on major issues such as upper-layer ballistic missile defense. For example, there has been no proposal to enhance Aegis Ashore’s protection against Russian air and missile capabilities, though NATO pledged at Warsaw to engage in a reflection on addressing Russia’s growing anti-access and area-denial (A2/AD) capabilities.

Absent a significant shift in Russia’s military presence in the Black Sea region or an unanticipated diplomatic upheaval, NATO’s force posture measures announced in October 2016 and February 2017 complement previous steps to bolster deterrence and respond to the current situation by demonstrating the alliance’s resolve to prevent an escalation and achieve a common NATO vision for the region. As in the Baltics, the risk of a direct military confrontation between NATO and Russia, although not to be entirely ruled out, remains low as conflict would come at a high price for both players with little prospect for a clear strategic benefit. The most immediate task at hand for NATO and Russia is to reduce the possibility of a military accident, and in a positive sign, the chairman of NATO’s Military Committee recently had a phone call with Russian chief of staff Gen. Valery Gerasimov, a discussion that had not taken place for over three years.

Boris Toucas is a visiting fellow with the Europe Program at the Center for Strategic and International Studies in Washington, D.C.