One can argue many aspects of President Macron’s interview in which he warned about the “brain death of NATO.” One cannot argue that the U.S. focus on “burden sharing” has been an awkward combination of bluster and bullying focused almost solely on getting Europe to spend more in terms of fixed spending goals that are not tied to any aspect of strategy, force planning, or specific efforts to improve deterrence and defense.

There is nothing practical about some of his suggestions and comments, including his focus on a European Defense Initiative. In his interview in the Economist he states that,

…the European Intervention Initiative that I announced at the Sorbonne and which is now a reality: on Bastille Day this year, we had the nine other member states in Paris. Since then, Italy has joined us, and Greece would also like to join this initiative. This shows that there is growing awareness of the defence question. Countries like Finland and Estonia have joined this initiative, countries which up until now were, for one, deeply suspicious of NATO, and, for the other, distrustful of Russia, so in a mindset of: “I surrender completely to NATO”. The instability of our American partner and rising tensions have meant that the idea of European defence is gradually taking hold. It’s the aggiornamento for a powerful and strategic Europe. I would add that we will at some stage have to take stock of NATO. To my mind, what we are currently experiencing is the brain death of NATO. We have to be lucid.

The U.S. political emphasis on burdensharing has done serious damage to the alliance, as it has to America’s strategic partnerships through the world. The fact remains, however, that any analysis of comparative military capabilities, and defense resources shows that NATO is still the keystone to Western security. It provides the best possible real–world option for the West in every major aspect of collective security: dealing with Russia, countering extremism and terrorism, and finding functional approaches to out–of–area cooperation.

NATO is making real progress in spite of the differences between its members, their different interests and security policies, and the many challenges they face. The efforts to improve deterrence in the forward area, rapid deployment capabilities, and training for joint operations had made real improvements at the professional level thanks to NATO planners and commanders, in spite of the pointless bickering over burden sharing at the head of state and ministerial levels. As the Secretary General’s Annual Report for 2018 makes clear, NATO has many productive initiatives underway that do focus on its real security needs, and that will help deter Russia and deal with the key issues in its military readiness and force planning. In fact, some 90% of the Secretary General’s report focuses on such issues.

At the same time, it is all to true that NATO is now caught up at the ministerial level in meaningless burden sharing exercises that do not serve its security interests, and that are mathematically and functionally ridiculous. Its ministers focus far too much on abstract spending goals, rather than needed force improvement and mission capabilities.

Macron’s focus on brain death is all too accurate when he says that,

You have partners together in the same part of the world, and you have no coordination whatsoever of strategic decision–making between the United States and its NATO allies. None. You have an uncoordinated aggressive action by another NATO ally, Turkey, in an area where our interests are at stake. There has been no NATO planning, nor any coordination. There hasn’t even been any NATO deconfliction. A meeting is coming up in December. This situation, in my opinion, doesn’t call into question the interoperability of NATO which is efficient between our armies, it works well in commanding operations. But strategically and politically, we need to recognize that we have a problem.

NATO’s current burden sharing goals totally ignore military needs and effectiveness, and merely call for spending 2% of GDP on total defense spending levels, and at least 20% of annual defense expenditure on major new equipment. Such goals may seem simple, and it may seem hard to argue that more spending does not have benefits. This only begins to make sense, however, if one ignores any concern with what the added money buys. There are no serious aspects of life, however, where spending more is a substitute for spending wisely.

The Burke Chair at CSIS has prepared a new report that examines the practical and mathematical weaknesses of these goals in detail. It is entitled NATO’s “Brain Death” Burdensharing Blunders, and it is available on the CSIS web site at https://csis-website-prod.s3.amazonaws.com/s3fs-public/publication/191121_NATO_Brain_Death_Approach_Burdensharin.pdf

The analysis shows that NATO heads of state, Ministers, and parliaments/legislatures do not properly examine the priorities that would emerge from net assessments of the balance or on improving NATO’s capability to deter and fight. They fail to focus effectively on its many individual national problems and issues in strength and readiness, and they have failed to create coherent force and modernization plans for the future.

Worse, this report presents considerable quantitative evidence that NATO’s current burdensharing goals actually focus the Alliance on the wrong objectives, and do so in ways that encourage pointless burden–sharing debates over the wrong objectives. It shows that the 2% and 20% goals have six critical defects:

The report supports these conclusions with tables and charts that show how much more NATO is spending than Russia, that highlight the problems in the reporting on the various national efforts to meet the 2% of GDP goal, and that show NATO European spending has risen far more in real terms than comparisons based on percent of GDP reveal. They also show the lack of correlation between the level of spending in GDP and maintaining adequate force levels, the pointlessness of the spending 20% on equipment goal, and the need for the U.S. to stop bullying its allies by exaggerating its own efforts.

Spending more should not be the priority. Spending wisely should be. Accordingly, the report highlights the need for a new NATO Force planning exercise that examines how NATO country spending compares to that of Russia, and that asks why NATO spends so much more than Russia. NATO force planning should operate on the basis of a clear analysis of the priorities set by a net assessment of the balance. It should carefully consider Russia’s capabilities for hybrid, conventional, and nuclear warfare; and current nation–by–nation member country forces and capabilities.

An effective NATO force planning effort should set clear priorities for improving the mission capabilities of each individual member country – balancing force strength, readiness, and modernization – and setting force goals for a period covering at least five years in the future. NATO also needs to make such efforts transparent, and debate defense and force planning issues with the same openness that the Western democracies debate domestic issues. NATO must earn public confidence and support to get the resources and support it needs, and engage with outside criticism and debate.

Finally, NATO military and civilian staffs will need the authority to criticize and analyze on a country–by–country basis, and not simply rubber–stamp national plans. They need the authority to report even when some aspects of what they report can embarrass member countries. Above all, the U.S. – and all member countries – should approach force planning from the view of creating an effective partnership – not bullying other states or using the effort to get other nations to do more so they can do less. 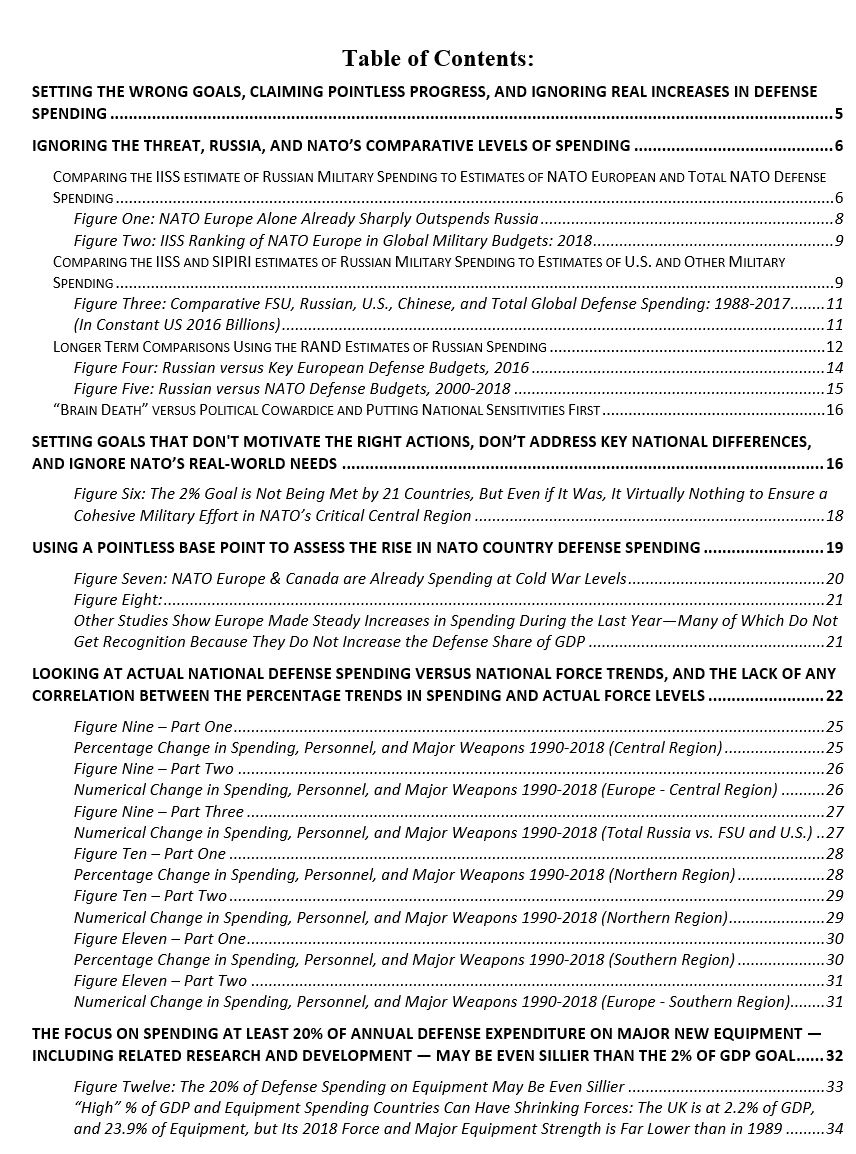 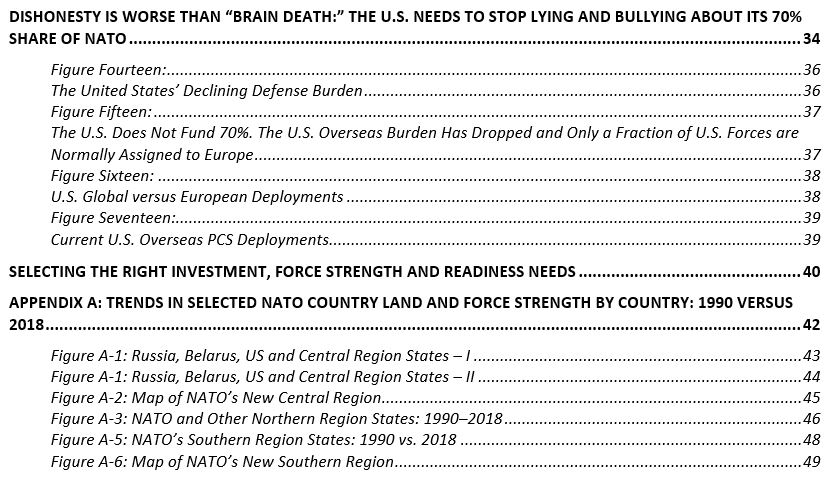