Is the Navy Too Small?

A1: It’s a talking point for Republican presidential candidates, but they’re not the only ones who say yes. The 2014 National Defense Panel, a statutory, bipartisan panel of nongovernment experts, recommended increasing the Navy to between 323 and 346 ships. Studies from several think tanks, including CSIS, have also made the argument.

Q2: How big is the Navy today?

A2: 272 ships as of September 23, 2015 (technically, “deployable battle force ships”). The Navy is built around its 10 aircraft carriers (soon to be 11, when the USS Ford finally delivers next year), each carrying up to 90 aircraft. The Navy has 100 surface combatants to escort the carriers and conduct independent operations, 54 attack submarines, 14 ballistic missile submarines for nuclear deterrence, 4 cruise missile submarines for land attack, 30 amphibious ships for deploying Marines, and about 60 other ships for support and logistics.

Q3: Is the Navy small by U.S. historical standards?

A3: The answer is yes and no. By the commonly used metric of number of ships, the Navy is at an historical low point and hasn’t had this few ships since 1916, as Mitt Romney noted in the 2012 presidential debates. Today’s count of 272 compares with 550+ during the Reagan administration and the 300s during the Clinton years when the Navy was coming down from Cold War levels.

Analysts point out that using ship numbers as a primary metric of naval strength leaves out a lot of important detail. If one looks at tonnage—a surrogate for capability—the Navy is smaller than at points in its past but not as dramatically as the ship count might imply. Today, the Navy has 273 ships weighing a total of 5.1 million tons. In 1975, the Navy had 559 ships weighing 5.7 million tons. So in 1975, the Navy had twice as many ships as today but only 10 percent more tonnage. The reason for the disparity is that Navy ships have been getting larger over time. For example, today’s Arleigh Burke–class destroyers (DDG-51s) weigh 9,000 tons; destroyers in the 1970s were half that size.

A4: It depends on the strategy that a president wants to implement. Classically, the Navy has been sized for two things: wartime combat operations and day-to-day forward deployments. Wartime combat operations entail surging large numbers of ships to a high-intensity conflict. The number of ships needed depends on a variety of factors, but particularly the expansiveness of U.S. goals. The Obama administration’s goals are to defeat an adversary in one region and “deny the objectives of—or impose unacceptable risk on—a second aggressor in another region.” In plain English, that means the United States will defeat one opponent decisively, but in the second conflict, we will aim for less, for example, restoring the status quo before the conflict. The Republican presidential candidates are likely looking at decisively defeating the enemy in the second conflict as well, which requires more forces across the board, including the Navy.

Day-to-day forward deployment of naval (and ground and air) forces, the other driver of force size, serves several purposes: to engage partners and allies, to deter potential conflicts, and if a crisis arises, to respond quickly. Historically, the United States has maintained forward deployed forces in three theaters: the Pacific, the Mediterranean and Europe, and the Indian Ocean/Middle East. To maintain a carrier battle group forward deployed in each of those three regions continuously would require 14 to 15 carriers. In addition, there are a variety of other demands on naval forces. For example, submarines conduct nuclear deterrence and intelligence missions, and there are operations in other theaters such as South America and Africa. Meeting all of these needs would require a Navy larger than its current size.

The Obama administration has decided not to maintain continuous carrier coverage in all three theaters but to gap the coverage particularly in the Mediterranean and Europe. As a result, it can execute its strategy with a smaller Navy, though with some risk.

Q5: Is the U.S. Navy larger than the next seven or so other navies? Isn’t that excessive?

A5: Yes and no. Yes, the U.S. Navy is larger than the next seven or so other navies (depending on how one counts), and most of these are our allies. The United States operates 10, soon to be 11, 90,000-ton aircraft carriers (in addition to 10 40,000-ton amphibious assault carriers). China and Russia each have one 60,000-ton carrier.

No, that’s not necessarily excessive because the U.S. Navy has global responsibilities that other navies do not. The U.S. Navy is expected to operate in the Mediterranean, in the Middle East, and in the Pacific and to have forces forward deployed at all times.

Q6: Isn’t the Navy much more capable now than in the past?

A6: Yes, much more. The F-35 now entering the fleet is stealthier than the previous generation of aircraft. Today’s submarines are quieter. The cruiser and destroyer weapons are longer range and more accurate.

But our enemies are also more capable. We are in a situation that has been called the “Red Queen effect” in evolutionary dynamics. That is, we must run as fast as we can just to stand still. Because our potential enemies are also improving their capabilities, we are not gaining on them.

Mark Cancian is a senior adviser with the International Security Program at the Center for Strategic and International Studies (CSIS) in Washington, D.C. A more detailed discussion of these issues is available at https://csis.org/publication/us-navy-too-small . 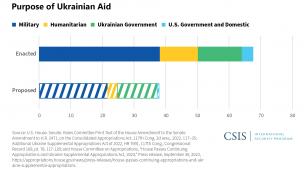 Aid to Ukraine Explained in Six Charts
By Mark F. Cancian
November 18, 2022
In the News

How Was Russia Able to Launch Its Biggest Aerial Attack on Ukraine?
The New York Times | Lara Jakes and Marc Santora
November 18, 2022
In the News

Russia's war in Ukraine rages on without a clear end in sight. Here are 6 ways the conflict could play out.
Business Insider | Alia Shoaib
November 6, 2022
Commentary 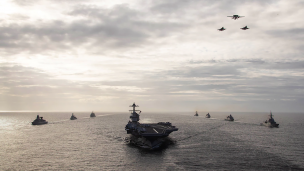 Force Structure in the National Defense Strategy: Highly Capable but Smaller and Less Global
By Mark F. Cancian
October 31, 2022
In the News

VIDEO: War Games: What would conflict with China mean for Australia?
ABC | Featuring Mark F. Cancian
October 31, 2022
View all content by this expert