The September 19-20 High-Level Meeting at the UN General Assembly was a high-profile, somewhat risky and ultimately sobering test of the proposition that non-communicable disorders (NCDs) could become a new global health priority.

Hopes were high among advocates that the meeting would be a transformative historical moment, akin to the 2001 UN High-Level Meeting that put a spotlight on HIV/AIDs.  The meeting aimed to generate elevated action to combat diabetes, cancer, lung and heart disease and increased attention to their primary risk factors – tobacco, alcohol, poor diet, and inactivity.  Though the result last week for NCDs fell far short of a transformative moment, it was hardly a failure. Indeed there were many achievements, enumerated below.  Outcomes were mixed, were largely predictable, and were shaped by a profoundly different set of economic and political factors than those at play in 2001.

The High-Level Meeting accomplished much. It shone a global spotlight on NCDs, elevated the consciousness and attention devoted to them, generated valuable new data and analyses, profiled countless innovative initiatives by countries, businesses and NGOs, and gave ample voice during its sessions to over 900 affiliated groups represented by the quickly assembled NCD Alliance. The meeting highlighted the exceptional leadership by several Latin America and Caribbean countries in addressing NCDs. New York City Mayor Michael Bloomberg, an American pioneer in reducing smoking and changing diets, delivered a powerful closing statement.

The political declaration called for national plans by 2013 and several smart steps which are feasible, presuming sufficient political will: accelerated implementation of the Framework Convention on Tobacco Control, including increased taxation; policy changes and public campaigns to eliminate transfats, reduce consumption of salt, sugar and saturated fats, and increase physical activity; better screening, counseling and therapy to reduce the risk of heart disease, detect cervical cancer early, and immunize against hepatitis B to prevent liver cancer. The declaration prioritized prevention, poverty reduction and the integration of urban planning and environment into national strategies. The World Health Organization (WHO) priced the package of baseline programs at an estimated $11.4 billion per annum.

Just prior to the meeting, Secretary of State Hillary Clinton announced that the Obama administration was joining with former President Bush (through the Bush Presidential Center) and corporate donors to launch the Pink Ribbon/Red Ribbon campaign which will use existing U.S. HIV/AIDS platforms, a mix of private sector funds and a modest increase of U.S. official resources to bring about early screening of cervical and breast cancers, including early treat of pre-cancerous cervical lesions. At this same time, Eli Lilly and Company launched the The Lilly NCD Partnership, a promising $30 million five year initiative. An important study prepared expressly for the meeting was Rachel Nugent’s “Bringing Agriculture to the Table: How Agriculture and Food can Play a Role in Preventing Chronic Diseases,” issued by the Chicago Council on Global Affairs.

These positive developments notwithstanding, the meeting also conformed to the tough realities of today, which are markedly different from the circumstances that shaped the global response to HIV/AIDS in 2001.  The emerging NCD priority competes from a position of relative weakness against the established, existing priorities of infectious diseases – HIV, TB and malaria – and maternal and child health. No less important, it has to contend with the innate conservatism of the current austere era, borne of constrained budgets, a debt and deficit crisis in the United States, and worsening financial instability in the Euro zone.

The High-Level Meeting brought home that this is indeed an era that fiercely favors caution, pragmatism, incremental adaptation, voluntarism (not regulation), innovative partnerships, and protection of existing trade regimes and other perceived drivers of economic growth. It is not an era that favors bold transformation. The result: a political declaration that said much of considerable value but studiously avoided hard targets for judging future performance and accountability; that elicited no significant new money; and that brought about no commitment to change existing trade rules and practices.

There are a few foundational realities that contribute to this model of response.

First is the nature of the NCD threat itself. It is fundamentally different from HIV/AIDS. HIV/AIDS in 2001 was a singular new threat that was perceived to inflict immediate and dire consequences to both the young and old, particularly in low income countries. NCDs at present account for 36 million annual deaths, nearly two thirds of all deaths worldwide. It is a global epidemic, certainly, but it is a phenomenon already familiar to wealthy industrialized countries: in that sense, it is not an especially new or startling development.  Nor are noncommunicable diseases singular or concentrated: they comprise several threats unfolding steadily over time across multiple disease areas. Today NCDs hit older populations the hardest, and impact emerging powers significantly.  Only in the coming decade are NCDs projected to have truly grave consequences in low-income countries.

The Harvard School of Public Health and the World Economic Forum make the most powerful case for the threat posed by NCDs in the study released on the eve of the High-Level Meeting: they project a cumulative output loss of $47 trillion in the next two decades if appropriate actions are not taken. While these projections are harrowing, they are economic future in orientation and far less an immediate humanitarian emergency.

Second is the NCD movement. It is not yet a powerful, unified, political force. It is a fragmented umbrella movement embracing diverse interests: professional medical groups, researchers, service providers, and the food, beverage, pharmaceutical and medical devices business sectors. Patients – persons living with NCDs – are not present as a core social or political base. Organized protest and confrontation are not the NCD Alliance’s natural modus operandi or its skill base. It should not be a surprise that in the space of just a few years the NCD Alliance is still a work in-progress, with much more work ahead before it graduates into a more effective movement.  In the lead up to the High-Level Meeting, the Alliance did make substantial contributions; however the ultimate verdict on its durability is not yet in.  We need to remember these are still very early days for the Alliance. As of 2001, the HIV/AIDS movement had been evolving for over a decade and a half.

Third is the fundamental question of where money and leadership on NCDs is realistically to emerge. In contrast with HIV/AIDS, I predict, both will inevitably come from the countries that themselves are directly threatened by NCDs. Money and leadership will not come from traditional Western donors who do not have the appetite for taking on a new global health priority (even though they can and will tap expertise, training and scientific research capacities.) Leadership will come from individual countries that recognize the emerging problem, understand the costly implications of inaction, and have the political will, strategic focus, financial and institutional capacities to stage a response. Most will be emerging powers, as we will increasingly see with China, India, South Africa, Brazil and other South American and Caribbean states. Certain low-income countries like Rwanda will pick up discrete issues like cervical cancer and make them a priority. The sooner we recognize this paradigm shift, the sooner we will avoid the mistake of assuming that Western donors have to lead and carry the costs of response in every instance.  Hopefully in time we will see common interests towards NCDs among emerging powers translate into greater action in the G20 and other multilateral fora.

Where does this leave things? NCDs are rising as a concern but have not yet hit the big time. NCDs are not yet perceived officially to be a global epidemic: they are, according to the political declaration, a “challenge of epidemic proportions.” Thus targets and accountability mechanisms will come later.  As for now, conservatism reigns in the era of austerity. The pharmaceutical industry is loath to see patent protections weakened if NCDs are declared an epidemic, and it is able to defend that position. Countries will be reliant on the flexibilities that already exist in current TRIPS regulations, the policy principles laid out in the Doha Declaration, and the generic medications widely used to treat the four major NCDs. Beverage and food industries are open to dialogue around negotiated voluntary changes to formulations and marketing practices, but resistant to mandated regulatory controls and able to defend that position. Western donors are preoccupied with economic crisis at home and on the global level, do not have the resources to fund major new NCD initiatives, and will not pay a significant price for taking that position.   The NCD response has had to fit itself to these powerful constraints. The New York meeting instructed the WHO to prepare targets and indicators by the end of 2012. In the first half of 2013, it will be possible to visit these issues anew. 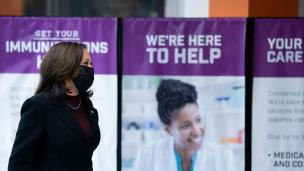 Mitigating the Impact of Sanctions on Humanitarian Action
April 7, 2021
On Demand Event 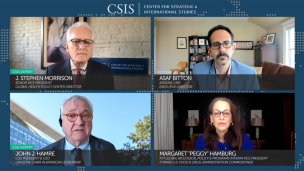 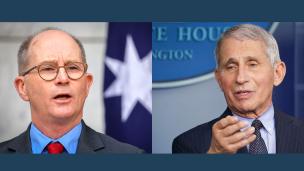 A Conversation with Dr. Anthony Fauci and Professor Paul Kelly
March 9, 2021
View all content by this expert