New Caledonia’s Vote against Independence: What Next?

“Tonight, France is more beautiful because New Caledonia has decided to stay part of it.” In a televised statement, President Macron hailed the results of the third and final referendum on independence held in New Caledonia on Sunday, December 12. Over 96 percent of voters have rejected independence of this archipelago in the South Pacific. Yet, this massive support to stay in the French Republic has been tainted by a low turnout of only 44 percent (down from 85 percent in the last vote in 2018). Concerned by the disrupting effect of Covid-19 on the campaign, pro-independence forces called for a delay in the referendum and then for “non-participation” following Paris’s decision to proceed with the vote.

This mixed result illustrates the divisions and tensions of this territory, which has been part of France since 1853. The December 12 referendum is the culmination of a decades-long process of reconciliation between the independence and loyalist camps under the auspices of the French government. Nonetheless, the 1998 Nouméa Accord’s promise of a “common destiny” for all Caledonians is still a distant horizon. “We cannot ignore the fact that the electorate has remained deeply divided despite the passage of years,” acknowledged the French president, who announced a “period of transition” of 18 months to define a new political, economic, and social project for the archipelago. Roch Wamytan, a leader of the independence movement, already declared the referendum “null and void” and opposed any talks before France’s April presidential elections.

Yet, the success of this new chapter in New Caledonia’s history is essential for Paris and its Indo-Pacific strategy. Composed of several islands and islets, New Caledonia is modest in proportion with a land area of 18,575 square kilometers (7,172 square miles) and a population of 286,000. But the archipelago has a strategic position in the heart of the South Pacific with a vast exclusive economic zone of 1.3 million square kilometers (500,000 square miles), more than half of the Mediterranean Sea surface. With considerable mineral resources (nickel, cobalt), New Caledonia is also drawing the attention of many powers, including China, whose influence in the Pacific Islands is growing. New Caledonia’s future is therefore pivotal not only for France but also for the South Pacific as a whole. 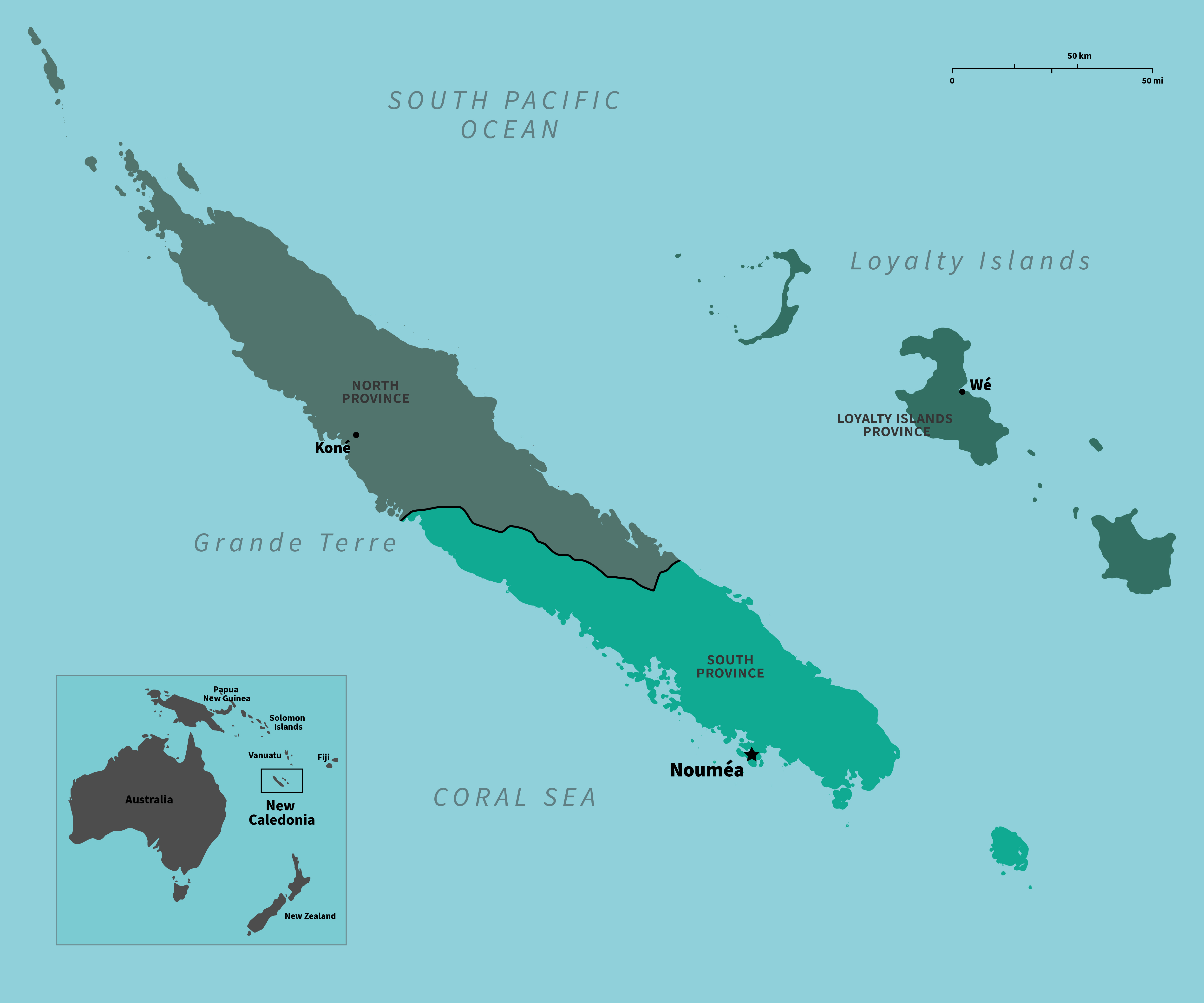 The original inhabitants of New Caledonia, known as Kanaks, have lived in this archipelago for the last 3,000 years. British explorer James Cook was the first European to sight New Caledonia in 1774. Amid a fierce Anglo-French competition in the South Pacific, France claimed sovereignty over this territory in 1853. The archipelago first served as a “penal colony” for France while thousands of laborers from Asia and Polynesia were employed in the mining industry. The colonial system confined the Kanak community to reservations, sparking revolts notably in 1878 and 1917.

Laws from the colonial era were ultimately abolished in the aftermath of the Second World War. New Caledonia became an overseas territory, and Kanaks obtained French citizenship. In the 1960s, the archipelago experienced an economic boom driven by a growing demand for nickel, an abundant commodity in New Caledonia, which has about 25 percent of world’s nickel resources. Nickel production increased from 2.5 to 7.7 million tons from 1965 to 1971 while migration from metropolitan France soared, making the Kanaks a minority in 1963 (they now represent 42 percent of the population).

Yet, an independence movement started to grow stronger in the 1980s among the Kanaks, who were frustrated by a lower socioeconomic status and a lack of involvement in economic and political life. Led by Jean-Marie Tjibaou, the Socialist National Liberation Front (or FLNKS) was created in 1984 and demanded an independence referendum. Tensions between pro-independence and loyalist forces quickly escalated, leading to four years of violent unrest between 1984 and 1988, called “the events” by the French media at that time. The conflict caused the death of 78 people, including 62 civilians.

Tensions culminated in April 1988 when Kanak militants killed four French policemen and took 27 others hostage on Ouvéa Island, resulting in a military response by the French authorities and the death of 19 Kanaks. This tragic episode forced both parties to engage in a reconciliation process under the auspices of the French government, which led to the Matignon Agreements in 1988, followed by the Nouméa Accord in 1998. These accords set in motion a decades-long transition period that gave a unique but provisional status to New Caledonia until the organization of an independence referendum in 2018.

Enshrined in the French constitution, New Caledonia’s new status gave more autonomy to the archipelago, transferred important powers from Paris to local authorities, and recognized indigenous Kanak culture and identity. The Nouméa Accord also created a special electoral list, which includes all Kanaks and requires other inhabitants with several years of continuous residence to register. The 2021 vote was the third and last referendum planned by the Nouméa Accord. Held in 2018 and 2020, the first two referendums were also won by the pro-French side with 56.7 percent and 53.3 percent of the votes respectively.

A Strategic Territory in the South Pacific

Paris’s commitment to the political stability of New Caledonia can be explained by the significance of this territory for France’s strategy in the Indo-Pacific. Thanks to its three overseas territories in the Pacific—New Caledonia, French Polynesia, and Wallis and Futuna—France has an extensive footprint in the region. During the first visit of a French president to the archipelago in 1966, General de Gaulle declared that Caledonians “had a French role to play in this part of the world.” Echoing in 2018 the words of his distant predecessor, President Macron explained in Nouméa that New Caledonia was instrumental for “France’s vocation to radiate across all continents and all seas.”

New Caledonia is integrated into the French military network, which spans across the Indo-Pacific. The Armed Forces of New Caledonia (FANC) include about 1,600 soldiers deployed in four bases with naval and air assets. These forces ensure the protection of France’s sovereignty, especially against illegal fishing activities. They closely cooperate with Australia and New Zealand, as witnessed with the trilateral FRANZ agreement, which coordinates their disaster reconnaissance and relief assistance efforts in the Pacific. French forces positioned in New Caledonia also contribute to wider regional security, as illustrated by the 2019 deployment of the Vendémiaire frigate in the South China Sea and the Strait of Taiwan. 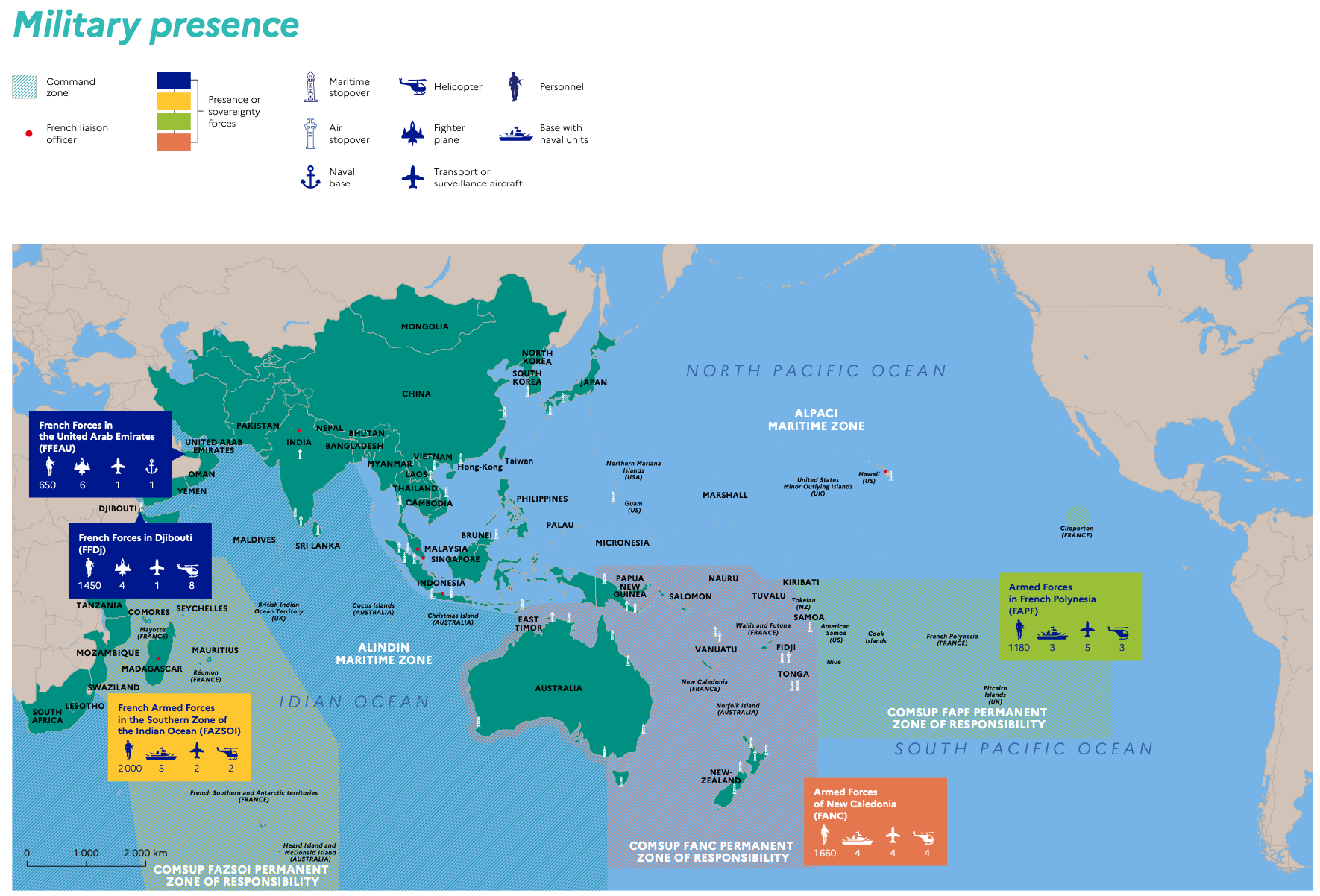 France has also supported the regional integration of New Caledonia. Australia, New Zealand, Indonesia, and the Republic of Vanuatu have a consulate general in Nouméa. With the support of Canberra, New Caledonia, together with French Polynesia, became a full member of the Pacific Islands Forum in 2016. Similarly, the archipelago joined the Pacific Regional Committee of the World Health Organization and became an associate member of the International Organization of La Francophonie.

Given New Caledonia’s strategic position, France has recently been worried by China’s mounting presence in the South Pacific. In 2018, President Macron warned that China’s growing hegemony in the region could “reduce our freedoms and opportunities.” Beijing is especially interested in New Caledonia’s resources, as it imports 55 percent of the nickel produced on the archipelago. While China has started to quietly increase its influence in New Caledonia by getting closer to tribal and political leaders, France has managed to limit Beijing’s clout compared to neighboring Pacific islands like Papua New Guinea, Fiji, the Republic of Vanuatu, or the Solomon Islands.

Although it is the last referendum required by the 1998 Nouméa Accord, the recent vote does not close the chapter of New Caledonia’s self-determination process. As explained by Alexandre Dayant, research fellow at the Lowy Institute, “separatists will remain independentists, and the loyalists will want to remain connected with France.” Time is still needed to forge a shared destiny among the various communities of New Caledonia. The French expert Bastien Vandendyck underlined that it would be misleading “to think of creating a united society in such a short period of time, barely a generation.”

Against this backdrop, the French government announced that the referendum will be followed by a 18-month transition period to build future institutions that would be satisfactory for both camps. Paris is also committed to developing an economic and social project that would address the many challenges facing the archipelago. While being one of the most prosperous French overseas territories, with a GDP per inhabitant of €36,000 ($40,600), New Caledonia still suffers from important inequalities, with 17 percent of New Caledonians living below the poverty threshold. Home to unique biodiversity, the archipelago is also increasingly witnessing the destabilizing impact of climate change. If negotiations succeed, a new referendum on this political, economic, and social project would be organized by June 30, 2023, to ensure buy-in from the New Caledonians.

The future of New Caledonia will also depend on its effective regional integration. While the ongoing tensions between Paris and Canberra over the Australia-UK-U.S. (AUKUS) agreement could be an impediment in that regard, Australia and New Caledonia are close neighbors and share a maritime border, making such integration a necessity. While the AUKUS partnership will leave deep marks, France and Australia should engage in a forward-looking process to rebuild trust and restore cooperation, especially in the South Pacific. Higher cultural, scientific, and economic exchanges would benefit both Australia and New Caledonia. Increased cooperation on maritime security should be pursued, building on France’s initiative to create a network of coast guards for the South Pacific. Such cooperation is crucial for the stability of region.