The Next Wave Is Not a Covid-19 Wave: Debt Sustainability in Developing Countries

Global indebtedness has soared to unprecedented levels. The fiscal outlook for many low- to middle-income countries remains brittle, with the prospect of interest rate hikes in advanced economies, the economic impact of the Covid-19 pandemic, and geopolitical events such as Russia’s war on Ukraine further complicating the global economic scenario. This underlying "debt tsunami" risks fueling the next global financial crisis if left unchartered.

Q1: What is the current challenge?

A1: Even before the pandemic, countries were already amassing large amounts of private and public debt. In fact, at the start of the pandemic, global debt levels were higher than at the onset of the 2008 Great Recession. This is especially the case for certain commodity-exporting countries that were affected by volatile markets. According to analysis by the International Monetary Fund (IMF) and the World Economic Forum (WEF), in 2019, the global public debt surpassed its 2007 level by 23 percentage points of GDP. The share of public debt rose from 72 to 105 percent of GDP for advanced economies, 35 to 54 percent of GDP for emerging economies, and 14 to 44 percent of GDP for lower-income economies. 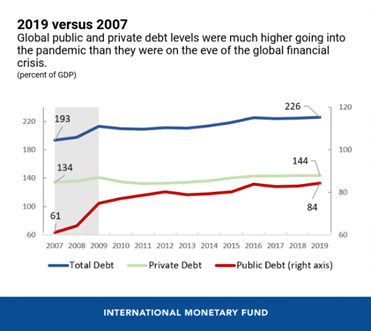 Source: Reprinted with permission from Xuehui Han, Paulo Medas, and Susan Yang, "The pre-pandemic debt landscape - and why it matters," IMFBlog, February 1, 2021, https://blogs.imf.org/2021/02/01/the-pre-pandemic-debt-landscape-and-why-it-matters/.

Since 2020, countries have employed fiscal and monetary tools to respond to the pandemic's economic, health, and social effects. This included large fiscal packages to support increased health expenditures and expand social safety nets, together with extending loans and subsidies to keep businesses running and stabilize financial institutions. Although necessary, this fiscal expansion has added to the already high levels of debt in the global economy. According to the World Bank, "both global government and private debt levels have risen to their highest level, and at the fastest single-year pace, in five decades." In 2020, global government debt increased by 13 percentage points of GDP to reach a record of 97 percent of GDP. In advanced economies, it was up by 16 percentage points to 120 percent of GDP and, in developing countries, by nine percentage points to 63 percent of GDP. The rise in debt to GDP ratios, however, may be inflated since GDP fell globally.

Increased levels of debt in developing countries raises concerns about its sustainability. In fact, the United Nations reported that 44 percent of low-income and least developed countries (LDCs) are at "high risk of external debt distress or already in debt distress." In recent months, the ability of developing countries to repay this debt has come into question, as witnessed by the recent restructuring in Zambia, Argentina, and Lebanon.

This rising debt wave is also a major risk for global financial stability and undermines efforts to finance the Sustainable Development Goals (SDGs). It questions the ability of countries to balance fiscal vulnerabilities with development objectives. Data compiled by the Jubilee Debt Campaign show that developing country debt payments in 2021 are at the highest point since 2001. These payments consume a large percentage of a country’s resources. 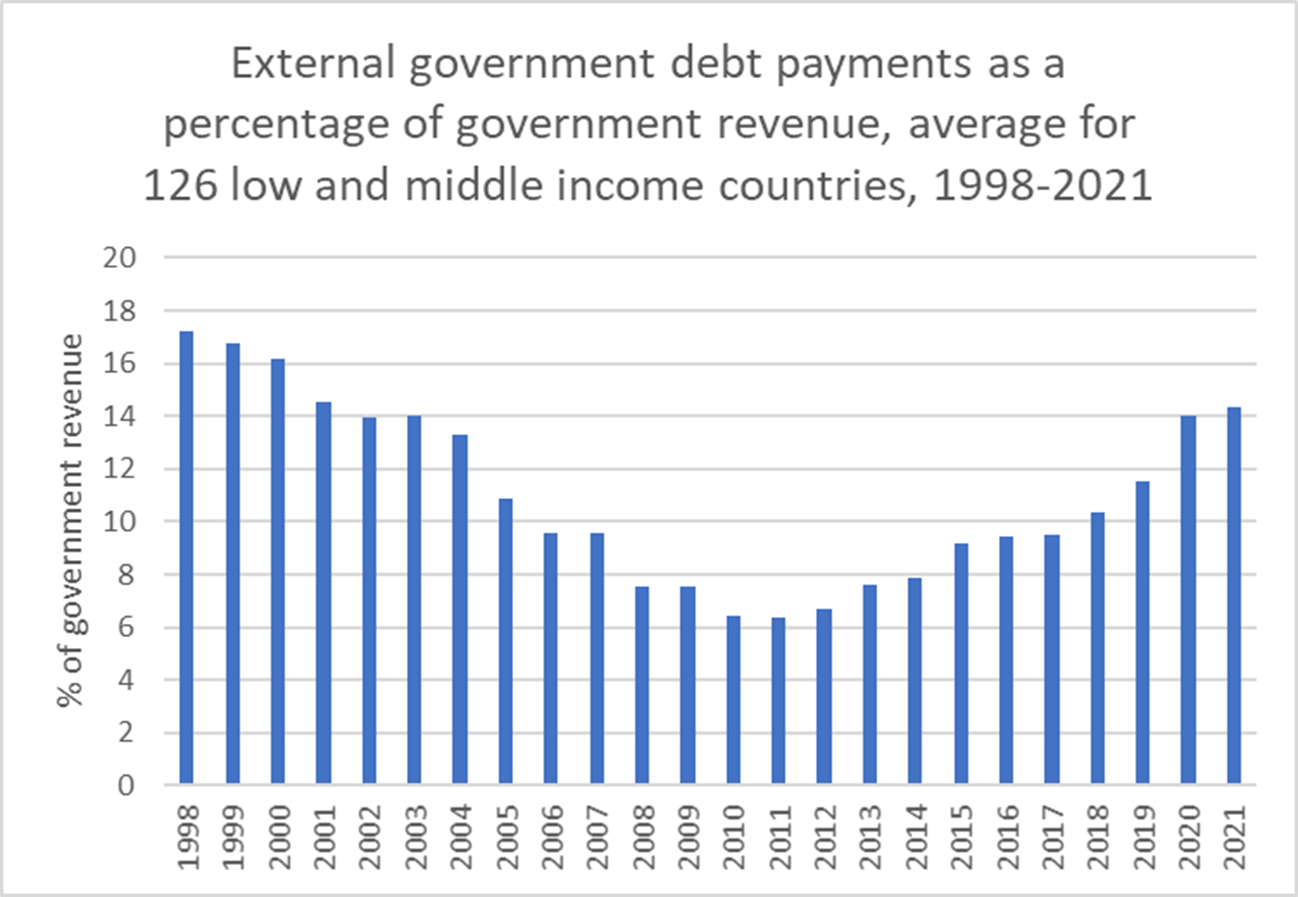 A2: Since 2010, the structure and characteristics of sovereign debt have transformed with new creditors and loan instruments coming into the mix. As a result, the composition of debt has become more diffused among creditors, with a riskier profile.

According to a recent article published in the Journal of International Economics, starting in 2000, China became the largest official lender to developing countries, surpassing the IMF and World Bank. China has led the way in terms of providing critical infrastructure needs to developing countries under its Belt and Road Initiative (BRI). However, the terms of these loans remain opaque, and they can burden countries with unsustainable debt. According to some analysts, 50 percent of Chinese lending is not recorded in international debt statistics. With China becoming a large official creditor through the BRI, there is not a clear picture on the characteristics of this debt, such as the amounts or the terms of the loans. Furthermore, there is a lack of clarity on which loans within the BRI are owed to government institutions, and which are owed to private firms. In April 2021, China announced that it would work to promote debt sustainability in developing countries, but there is still no clear demonstration of this.

At the same time, the debt profile of developing countries has become riskier. Low-income countries increased borrowing in global capital markets, which has resulted in a diffused creditor base. Some of these bonds were issued with collective action clauses, which “allows bondholders to agree on debt restructuring even when some bondholders are against restructuring as long as majority agrees.” This essentially facilitates debt restructuring, should it be needed. However, not all bonds have the collective action clause, which makes restructuring difficult to coordinate.

Moreover, the prospect of interest hikes in advanced economies complicates matters for developing countries. Before the Covid-19 pandemic, the world went through a long period of low interest rates and high levels of liquidity, which prompted many countries to increase external borrowing. Low-income and middle-income countries were able to access commercial financing, including from non-Paris Club official creditors. However, higher debt held by the private sector further increases developing countries’ exposure to external shocks and capital flow reversals. With higher interest rates, the cost of servicing future debt will rise. Higher interest rates also incentivize investors to divest from riskier assets in developing countries toward safer assets in advanced economies.

A3: Global macroeconomic conditions and Russia’s unprovoked war in Ukraine add another layer of complexity to the high indebtedness profile and will likely impact countries’ ability to service debt.

Inflationary pressures in advanced economies will prompt central banks to raise interest rates in the near future. Rising global interest rates are going to make it harder for developing countries to refinance foreign currency–denominated debt.

At the same time, Russia’s war in Ukraine is disrupting supply chains and commodity markets. The Inter-American Development Bank has recently conducted several scenarios modeling the magnitude of the fiscal impact on the Latin America and the Caribbean region. High prices of energy and staple foods will impact the fiscal health of commodity-importing countries. This can also affect commodity-exporting countries since they will need to provide relief to vulnerable populations in terms of fuel subsidies to provide relief for higher energy prices.

As a result of the war, economic sanctions placed on Russia have resulted in an impending default of its economy, further raising questions on whether it will be effectively isolated from the global market and be able to meet payments to foreign investors. Additionally, the G20 may be facing an existential crisis, impeding effective multilateral solutions in the short term and possibly in the long term.

Q4: What are current global tools to address high indebtedness and debt distress?

A4: Currently, there is no single framework to bring all debtors and creditors at the table to facilitate the restructuring of debt.

In the past, there has been a series of large debt-restructuring programs that granted developing countries substantial debt relief, starting with the Paris Club in 1956, to programs such as the Brady Plan for Latin America in the late 1980s, the Heavily Indebted Poor Countries (HIPC) Initiative in the 1990s, and the Multilateral Debt Relief Initiative (MDRI) in the 2000s.

In 2020 and 2021, the G20 established the DSSI, which allowed for deferrals on official debt services for 73 low-income countries, particularly those dealing with continued financial fallout caused by the Covid-19 pandemic, among other issues. DSSI provided immediate liquidity support to help decrease the overall debt distress of vulnerable countries and assuage creditor demands. In 2020 and 2021, $6 billion and $7 billion in relief was administered, respectively, for 48 participating countries.

Overall, international financial institutions, multilateral banks, and private lending entities significantly scaled up their capacities to provide financial assistance and new lending pathways. Part of the initiative also included the foundation of the Common Framework for Debt Treatments, which seeks to improve global debt sustainability and address insolvency and other liquidity issues in DSSI-eligible countries. The framework also aims to bring other creditors outside of the Organization for Economic Cooperation and Development (OECD), such as China and private entities, under a single structure. The framework, however, has encountered numerous challenges, particularly with its overall processes, enforcement, and completion of promises to borrowing countries dependent on its support. As a result, the framework's implementation or lack thereof has  frustrated participating countries and disincentivized other severely debt-distressed countries from participating. Looking ahead at the future of the framework given the geopolitical tensions with China and Russia, it is unclear whether there will be a functioning G20 to shepherd it.

A5: Institutions of the current multilateral debt architecture, including the World Bank and IMF, the G20, G7, OECD, and the Paris Club, are committed to helping countries through debt service relief, concessional financing, and debt restructuring. The United States will need to lead and incentivize borrowers to work within the multilateral structure. China will need to be brought to the table with a vision to manage this restructuring. China will not allow for debt haircuts, but it might be open about rescheduling payments. The solution is multistep rather than single step (like Brady Bonds), especially if global interest rates create time pressure.

The United States should work on building capacity and exporting knowledge and expertise on renegotiating transactions to other countries or companies. Specifically, it should ensure that new loans are consistent with fiscal spending and deficit plans, and guarantee that countries' debt remains sustainable. The U.S. government could also assist countries in developing a comprehensive approach to a cost-benefit analysis for accumulating debt and in improving debt reporting and debt statistics.

Also on the table is the development of the local currency capital markets so that countries can borrow on their own terms more regularly than in foreign currency. Most importantly, ensuring debt transparency will be critical. In order to accurately analyze debt sustainability in a country, all types of debt and creditors should be assessed, instead of being upheld to narrowly defined concepts of public debt. This assessment will help to better understand debt that poses a risk to a nation's public finances.

Multilateral institutions will need to play a role in assisting countries in building a comprehensive financing plan that is aligned with their development objectives and types of expenditures. Debt resolution can include instruments like sovereign guarantees, debt for policy swaps, and creative thinking that allows for official sectors to step in and speed up recovery. Working with multilateral institutions, the United States can lead a more incremental and adaptive solution, from both the private sector and local government perspective, and create a debt structure that brings all stakeholders, including large creditors such as China, to the table.

Daniel F. Runde is senior vice president, director of the Project on Prosperity and Development and holds the William A. Schreyer Chair in Global Analysis at the Center for Strategic and International Studies (CSIS) in Washington, D.C. Romina Bandura is a senior fellow with the CSIS Project on Prosperity and Development. Frank Kelly is a non-resident senior associate with the CSIS Americas program.

The authors would like to thank Elena Méndez Leal, Isabel Vander Molen, Sarthak Sharma, and reviewers for their support in producing this analysis. The authors would also like to thank the participants of a recent private roundtable on the issue for helping identify key discussion topics surrounding debt sustainability.