Q1: What did North Korea launch?

A1: On the morning of February 7, North Korea launched an Unha-type rocket, headed due south. The rocket then apparently orbited an “earth observation satellite” called Kwangmyongsong-4 (lode star), reportedly weighing 200 kilograms, about twice the size of a satellite by the same name orbited in December 2012. Despite North Korea’s stated interest in a weather satellite to advance meteorological science, the test represents a significant indicator of both their capability and intentions to develop longer-range ballistic missiles.

Q2: What’s the context and significance?

A2: On the heels of the North’s fourth nuclear detonation a month ago, the launch reflects both continued technical advances and their sustained intercontinental ballistic missile (ICBM) ambitions. It will also certainly spark renewed interest in missile defense but also other active measures to counter North Korea’s missile program. The more profound significance of the launch, however, will likely be political, for what it will do to U.S.–South Korea relations, missile defense deployments on the peninsula and in the Asia Pacific more broadly, and the prioritization of allied military capabilities directed at defending against and if necessary defeating North Korean threats. News reports this week continue to highlight the potential launch of additional road-mobile missiles, as well as a possible fifth nuclear detonation.

Q3: What’s the difference between a missile and a space launch vehicle?

A3: Both missiles and space launch vehicles (SLVs) are rockets, and in some cases they may be virtually identical. A rocket capable of generating enough thrust at burnout to put something into orbit may also contain enough thrust to put something on a point of the earth thousands of miles away. The early missile programs of the United States and the Soviet Union went in tandem with aspirations for the exploration of space. In 1957, the Soviet Union demonstrated its first ICBM and orbited the Sputnik satellite, both using the R-7 rocket.

There are, nevertheless, technical differences between a rocket optimized for warhead delivery and one optimized to launch satellites. An SLV may also use more energetic liquid fuels, and if not used to deliver a warhead in short notice, it would not suffer from the need for fueling prior to launch. By comparison, solid fuel rockets are more stable, do not require fueling, and are preferable for missile readiness. The trajectory of an SLV to be inserted into orbit is also more shallow than the parabolic arc of a missile.

North Korea identified the launch as an SLV, and indeed it is. Notwithstanding North Korea’s claims of peaceful intentions and their ostensible interest in meteorology, U.S. officials were quick to state the obvious: that the launch is intimately tied to its military efforts. The STRATCOM press release, for instance, pointedly assessed it to be “a missile launch.”

Q4: What else does North Korea need for a nuclear-armed ICBM?

A4: The rocket launched on February 7 is better understood as a significant milestone toward a military ICBM rather than the final product. North Korea has paraded a road-mobile missile said to have ICBM range, called KN-08, but it has apparently not yet been tested in that configuration. When South Korea recovered parts of the Unha launched in December 2012, they assessed that it had a range of 10,000 kilometers (km), well in excess of the 5,500 km cutoff for ICBMs.

Even if a missile has adequate thrust to deliver a weapon long distances, the weapon still has to fit on top of it. In May 2015, North Korea claimed to have miniaturized a nuclear weapon. A report by the Defense Intelligence Agency and statements by the head of U.S. Forces Korea (USFK) and the head of U.S. Northern Command (NORTHCOM) have since suggested that they believe North Korea may indeed have the capability to miniaturize a nuclear weapon for delivery on a missile like the KN-08. Whether they have actually done so remains unclear, but the challenge of miniaturization to enable missile delivery is at least as much a concern of their continued nuclear testing as are marginal improvements in yield or effects.

It is worth noting that North Korea has apparently not yet demonstrated the ability to have such a warhead reenter the atmosphere. Of course, reentry technology has been around a long time, there may be sources of significant foreign assistance, and at any rate North Korea may be willing to accept greater technical risk or less advanced technologies. North Korea has surprised before, and it may do so again.

Q5: What will the test mean for regional missile defenses?

One significant impact will be the much anticipated deployment of the Terminal High Altitude Area Defense (THAAD) missile defenses to the Korean peninsula, presumably operated by U.S. Forces Korea. A recent CSIS report recommended that THAAD be deployed there, in addition to a wide variety of other missile defense improvements, including PATRIOT capacity and versions of the Standard Missile. In the longer term, South Korea may consider purchasing or building medium-term defenses of their own. China and even Russia have put significant pressure on South Korea not to host the defensive system, including for the potential of its radar to observe Chinese airspace. Recent events, however, make it more likely that South Korea has had enough. On Sunday, the Republic of Koreas and the United States issued a joint statement indicating that they would begin formal talks for the deployment of THAAD at the “earliest possible date.”

Although THAAD would contribute significantly to the defense of the peninsula from some of the more demonstrated medium-tier threats from the North, no weapon system is a silver bullet. Other offensive strike and other active defenses are still needed to contend with lower-tier air and missile threats along the entire kill chain, both before and after launch. North Korea’s arsenal also includes short-range rockets, medium-range No-Dongs, a newer mobile solid-fueled SS-21 variant called the KN-02, and of course substantial artillery threats to Seoul. Countering the full range will require both increased numbers of interceptors and a cheaper cost per kill.

Japan has been one of the closest partners of the United States on missile defense development and integration, and this relationship is likely to continue to improve, with the potential for trilateral cooperation among Japan, South Korea, and the United States. One may likewise expect Japan to continue to improve their PATRIOT defenses and their sea-based Aegis missile defense ships. Japan is likely to move forward on either Aegis Ashore (with a potential mix of Standard Missile interceptors) or possibly a THAAD battery of its own.

Q6: How about missile defense efforts for the U.S. homeland?

A6: North Korean missiles have been at the center of U.S. and allied discussions of both missile defense and preemption since the mid-1990s. The 1998 launch of a Taepodong missile over Japan was especially significant to galvanize U.S. reconsideration of the Anti-Ballistic Missile (ABM) Treaty and the need for homeland missile defense.

Important work is underway to improve discrimination of sensors as well as kill vehicle reliability. In late 2004, the United States deployed some initial (but quite limited) defensive capability for the homeland, and today, the United States has a total of 30 ground-based interceptors (GBIs) deployed in Alaska and California. Some 37 interceptors will be deployed by the end of 2016, and 44 by 2017. Two X-band radars are now deployed to Japan to support homeland defense and, in the event of a North Korean missile launch, would help distinguish a warhead from other debris and materials. An additional long-range discriminating radar (LRDR) is also being built in Alaska.

In the longer term, the North Korean missile threat could be countered in a more cost-effective manner with air-based interceptors or directed energy based aboard unmanned aerial vehicles loitering off the Sea of Japan or elsewhere. Promising work is underway with miniaturizing lasers, and deploying them at high altitude could eventually support boost-phase intercept against North Korea. This capability is not yet here, however, and for the foreseeable future chemically powered rockets remain necessary to kill other rockets.

Thomas Karako is a senior fellow in the International Security Program and director of the Missile Defense Project at the Center for Strategic and International Studies (CSIS) in Washington, D.C. 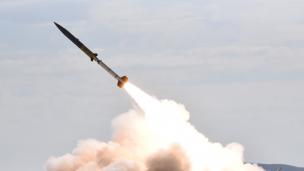 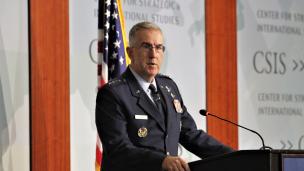