The Obama Strategy in Afghanistan: Finding a Way to Win

When President Obama issued yet another statement on Afghanistan on July 6th, and once again delayed his plans to cut the number of U.S. troops in Afghanistan, he took actions that had already become almost inevitable. Even though he had announced his plan to cut U.S. troop levels to 5,500 by the end of 2016 less than a month earlier, a level of only 5,500 troops risked critically weakening Afghan forces and possibly losing the war. Keeping the level at 8,400, however, was at best a half measure in meeting Afghanistan’s real needs and probably not even that.

The United States needs a far more serious review of its strategy in Afghanistan. It needs one that stops focusing on deadlines and total troop levels, and one that focuses on what it takes to deal with the facts on the ground in Afghanistan and actually win. It needs a strategy that can build sustained public and Congressional support, and provide a proper legacy for the next president. It needs a strategy that can at least try to avoid making Afghanistan an unnecessary pawn in the bitter presidential campaign to come and to give the Afghans a clear incentive to make critical reforms.

The Burke Chair at CSIS has issued a new report that examines these issues in detail. It is called The Obama Strategy in Afghanistan: Finding a Way to Win, and is available of the CSIS web site at https://csis-website-prod.s3.amazonaws.com/s3fs-public/publication/160707_Obama_Strategy_Afghanistan_Final.pdf.

The Table of Contents of the report are shown below: 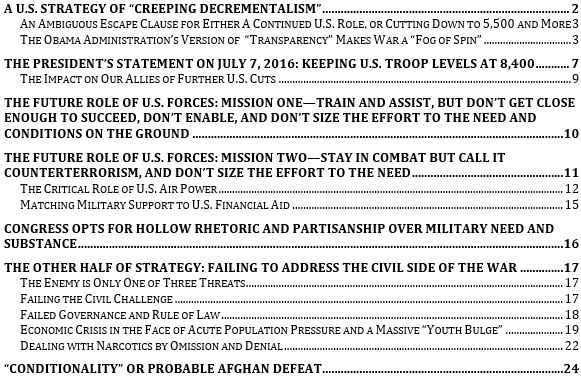 Downloads
Download PDF file of "The Obama Strategy in Afghanistan: Finding a Way to Win"
Written By