The Devil Is in the (Implementation) Details

On or before May 12, President Trump will announce whether, and to what extent, he plans to adhere to the terms of the 2015 Joint Comprehensive Plan of Action (JCPOA), the nuclear agreement endorsed by Iran, the United States, France, Germany, China, Russia, and the United Kingdom, or whether he will withdraw from the pact and reimpose sanctions on Iran. Over the last two weeks, analysts on both sides of the issue have liberally drawn on congressional testimony, presidential pronouncements and tweets, foreign leaders’ perspectives, and International Atomic Energy Agency documents to prognosticate and persuade. Over that period, French president Emmanuel Macron and German chancellor Angela Merkel personally came to Washington to lobby the president in favor of retaining the agreement, possibly through augmenting the range of covered activities. More recently, Israeli prime minister Benjamin Netanyahu weighed in, offering purportedly new revelations about Iran’s old nuclear weapons ambitions. Both his timing and delivery (televised, in English) appeared to be designed to convince the president to categorically reject what Trump himself has described as a “horrible deal.”

And continuing a “linkage” trend between commercial and security matters we have come to recognize as part and parcel with the “art of the deal,” last Monday President Trump announced he was forestalling the imposition of steel tariffs, including for certain EU countries, to allow those countries additional time to negotiate more acceptable arrangements—plausibly a thinly disguised effort to incentivize those allies to also be tougher on Iran and more closely aligned with the U.S. position.

In previous writings and podcasts, we have noted that the president can take a number of actions in the week ahead, ranging from continuing to waive sanctions (as he did last year after failing to certify Iran’s compliance with the JCPOA) to reinstating, or possibly augmenting, sanctions against Iran, either alone or in concert with some subset of the P5+1 signatories (i.e., the five permanent members of the UN Security Council—China, France, Russia, the United Kingdom, and the United States—plus Germany). Recent commentaries by CSIS colleagues Anthony Cordesman and Jon Alterman expertly address both the options and implications of various actions. Presumably any action to continue sanctions waivers would be accompanied by congressional and diplomatic efforts to strengthen and improve the current accord with the commitment to reimpose sanctions if such actions are not forthcoming or adequate in curbing selected Iranian activities. Each of the variations carries separate risks/rewards for regional stability and future nonproliferation efforts, but for purposes of this commentary we will focus on those related to oil markets and prices.

At this writing, Iranian oil production remains steady at somewhere between 3.8 and 3.9 million barrels per day (mmbd). The government is intent on growing output, but sanctions, both current and threatened, have severely limited needed foreign investment and technology, especially from Western companies. Over 30 fields have been or are being offered for development, but contract terms and sanctions fears have largely limited participation to Russian and Chinese companies, notwithstanding indications that European companies like Total and ENI are anxious to participate as well. More importantly, however, exports of both crude oil and condensates have surged since sanctions were lifted in 2016. Platts listed April’s crude oil exports at 2.88 mmbd; condensate exports exceeded 250,000 barrels per day.

Predictably, export destinations are also changing. More than 60 percent of Iran’s oil exports go to Asia, with China, India, Turkey, and South Korea being the largest purchasers. India, which reportedly agreed to double Iranian volumes, along with China and Turkey appear likely to defy/resist U.S. pressure to preclude Iranian imports, especially at distressed prices. For significant European buyers like Italy, France, Greece, and Spain, collective volumes have also doubled, but those are expected to decline if sanctions are reinstated. 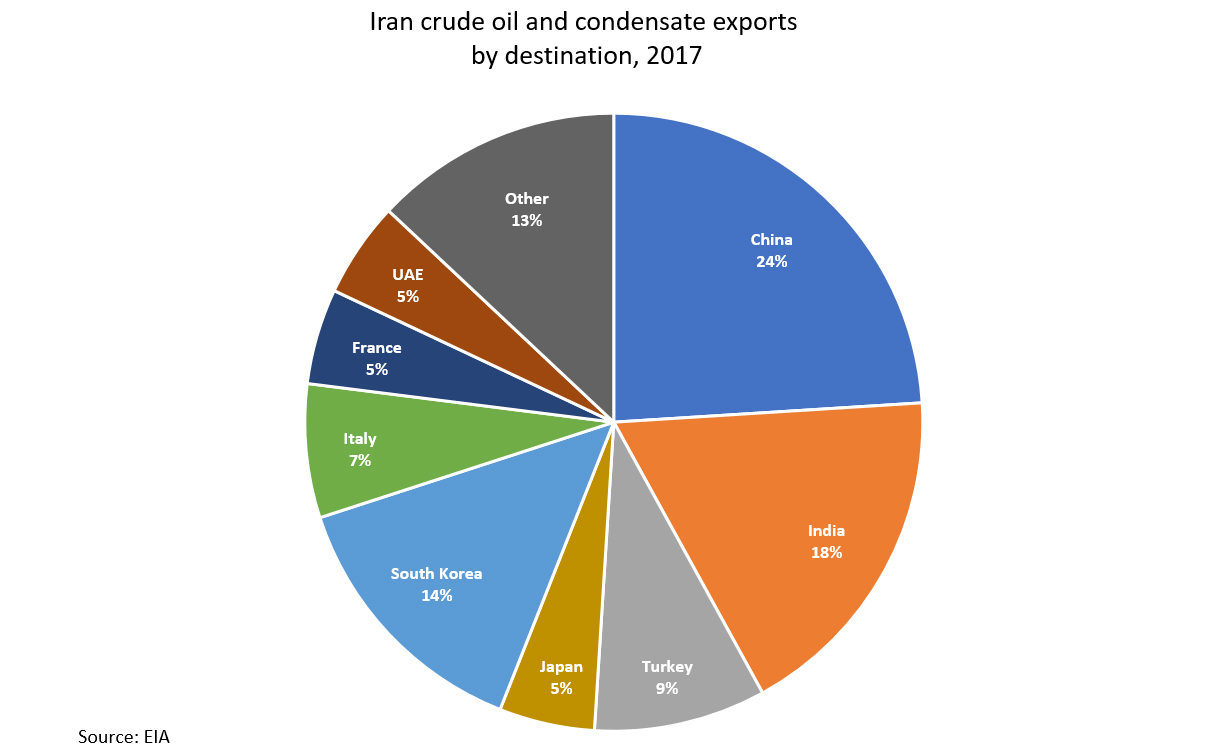 In last’s month’s oil commentary, we presented the case for market rebalancing and the danger of overtightening/overcorrecting by the OPEC/non-OPEC alliance. We also identified a range of geopolitical uncertainties that were likely to contribute to market and price anxiety over the next several weeks. These included the upcoming JCPOA waiver decision, but we also noted political uncertainties surrounding North Korea, Syria, Turkey, Iraq, Venezuela, Nigeria, Libya, and the Houthi threats in the Persian Gulf. We also discussed infrastructure constraints in the United States and projected impacts on moving increasing volumes of light tight oil even as we enter the summer driving season. Over the past few weeks, oil prices have risen to multiyear highs.

Should the president decide not to renew the crude oil sanctions waivers under Section 1245 of the FY2012 National Defense Authorization Act, oil prices seem poised to rise briskly as the market’s initial reaction is likely to overshoot (although current sentiment has probably priced in at least a portion of the sanctions risk already). The magnitude and duration of the increase, however, will more likely be determined by the “details” and structure/enforcement of the eventual implementation mechanism, as the physical market impacts will take time to materialize as oil flows adjust.

For example, assuming that the president decides to revoke the waivers next week, but the European Union, China, and Russia do not agree, market mechanics and diplomatic maneuvering will presumably shift into “impact mitigation” gear, even as Iran/others pursue recourse options. Under the statute, buyers have a 180-day interval in which they must “significantly reduce” Iranian crude oil purchases, a de facto “grace period” within which they can look for comparable alternatives to replace lost Iranian barrels. Between 2012 and 2014, nations that demonstrated significant reductions in their purchase of Iranian crude were able to earn sanctions exemptions. Additionally, in the previous iteration of sanctions, condensates weren’t explicitly included in the prohibition. How the president addresses the issue of secondary sanctions on allies will also be impactful. Some EU states that find themselves at odds with the administration are likely to seek waivers or possibly introduce blocking legislation at home.

Consequently, unilateral action by the United States without the European Union, China, or Russia would likely yield far different impacts than the multilateral sanctions that ultimately brought Iran to the bargaining table the last time. In such a case, we would expect Iranian oil to continue to enter the global market, albeit in somewhat reduced volumes (perhaps a downtick of 300–500 mb/d, at least initially), but with increased flows to Asia and modified volumes to parts of Europe. Price discounts would be expected.

To make up for the loss of Iranian barrels, crude suppliers with comparable quality oils would be positioned to take advantage of both presumably higher prices and the prospect of (re)gaining lost market share. First and foremost among these players would be Saudi Arabia, Kuwait, Iraq, and Russia—those holding presumed spare capacity and similar quality oil. The conundrum then for OPEC would be whether to abandon its current “freeze” strategy in order to adequately supply markets (an oft-stated Saudi commitment) or temporarily benefit from higher prices that could jeopardize economic/demand growth and incentivize new non-OPEC supply longer term.

Interestingly, for U.S. production, the loss of Iranian volumes would be more likely to be replaced by U.S. condensate and light oil barrels “if” Iranian condensate/light ends are covered by the sanctions. And even in that case, price discounts would be assumed if alternative light sources from Libya, Angola, and Nigeria were to reenter the market in volume. China might continue to import some oil from the United States to appease the president and deflect trade imbalance challenges.

Of course, the impacts of a unified U.S.-EU sanctions regime or a reinstatement of multilateral sanctions (both of which we find unlikely) would be appreciably different.

Next week’s announcement is certain to trigger both political and market reactions, but one should be cautious not to accept uncritically the political fanfare and hype with which the announcement will be made. Impacts will take months to unfold, and the implementation details and market players’ reactions will ultimately shape final outcomes.

(Note: At least four separate sanctions measures are up for review/renewal in the next three months. Sanctions provided under Section 1245 of the National Defense Authorization Act (NDAA) of 2012, which includes blocking foreign entities from the U.S. financial system if they are connected with/linked to Iranian oil export transactions, are up for renewal on May 12. Sanctions identified under the Iran Freedom and Counter-Proliferation Act (IFCA), the Iran Sanctions Act (ISA), and the Iran Threat Reduction and Syrian Human Rights Act (ITRSHRA) come up for review on July 11 and 12.)