Two months ago, oil was trading at a five-month high, with Brent prices just shy of $75/barrel, and prospects for market tightening were on the rise. The Organization of Petroleum Exporting Countries-plus (OPEC+) reduction agreement was on track to remove some 1.2 million barrels of supply from a market already challenged by losses (both real and anticipated) from sanctions on Iran and Venezuela, political strife in Nigeria and Libya, and logistical bottlenecks in the United States. Demand was projected to grow once refinery maintenance season ended and the global economic outlook, while slowing, continued to look strong.

Against this backdrop, key members of OPEC’s Joint Ministerial Monitoring Committee (JMMC) met a month ago in Jeddah, Saudi Arabia, to review market conditions and consider if the group’s existing strategy needed to be adjusted in light of ongoing market changes and then-current geopolitical events (see May 20 commentary). The aforementioned events included power outages in Venezuela, early reporting on contamination in the Druzhba pipeline, damage to four tankers outside of Fujairah, and drone attacks on Aramco’s east-west pipeline. And while demand concerns were evident, tweets from President Trump and Iranian threats to respond to provocations generally supported more bullish sentiment.

Not surprisingly, the JMMC session concluded with a recommendation to continue to monitor the market, while members expressed hope that the coming weeks (OPEC was scheduled to meet towards the end of June, but negotiations on the precise date continue) would bring clarity to the current confusion in the market with global stocks continuing to “gently” decline, demand proving resilient and supply stabilizing. Aspirations aside, however, market realities played out quite differently.

In the intervening month since the JMMC meeting, oil prices have plummeted to a five-month low ($62/barrel today) on the back of renewed threats of an escalating trade war, slowing economic growth in China and elsewhere, and more bearish global assessments from a variety of sources. Non-OPEC supply growth, reduced refinery runs (partly due to extended maintenance and bad weather) and rising global oil inventories coupled with decisions by non-commercial investors to take to the sidelines have further bolstered the bearish sentiment. 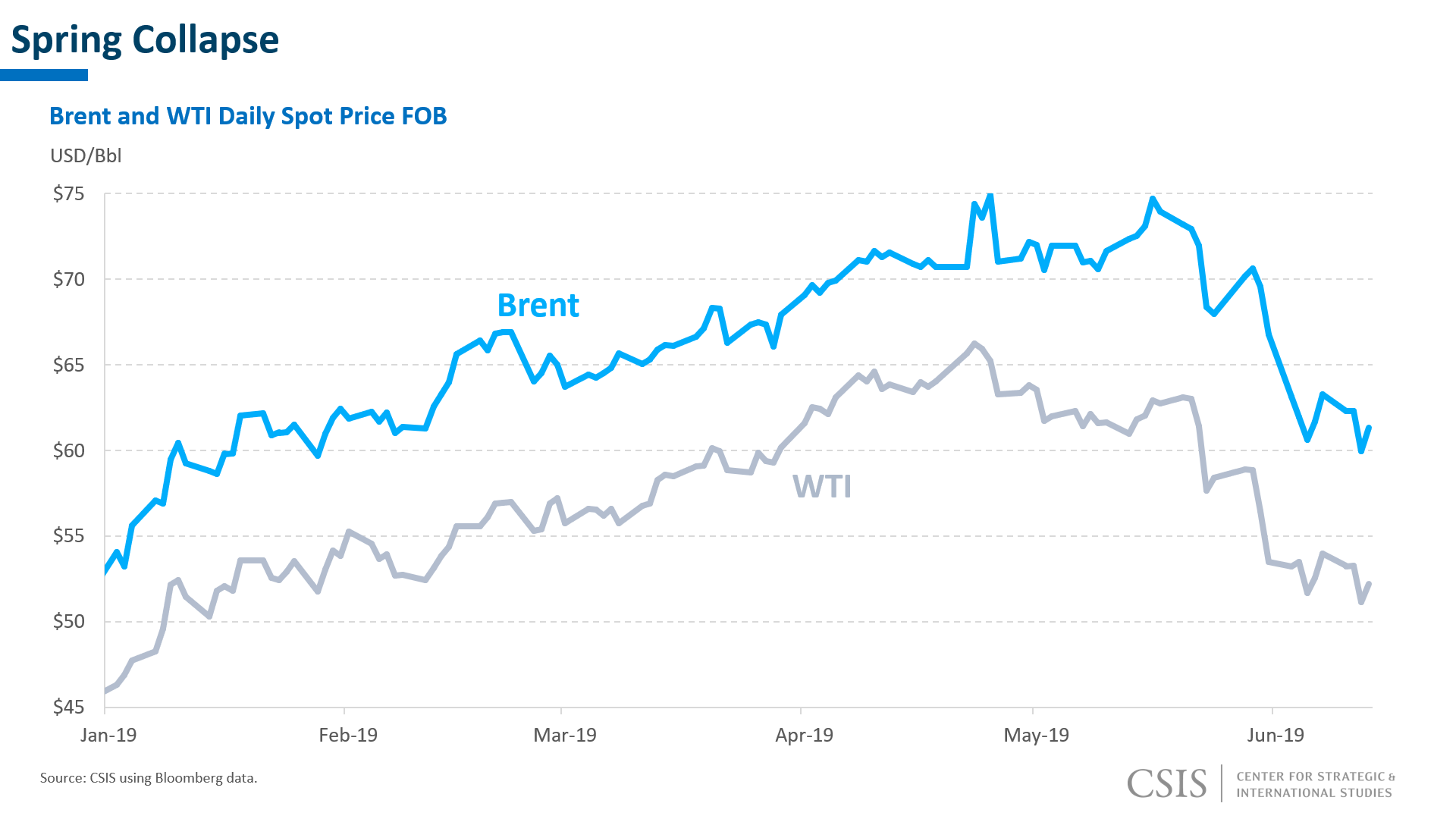 Fast forward to last week’s tanker attacks in the Gulf of Oman and the attendant price reaction, and OPEC’s dilemma is inescapably apparent. The “projectile” attacks on two tankers carrying Saudi and Emirati oil products just outside of the Strait of Hormuz brought immediate condemnation by Secretary Pompeo, who implicated Iran as the perpetrator, and equally prompt official denials by Iran. That one of the targeted ships (the Kokuka Courageous) was Japanese spawned expanded geopolitical connectivity, given that Japan’s prime minister, Shinzo Abe, was just in Iran meeting with Iran’s supreme leader, Ayatollah Khamenei, and Iranian president Hassan Rouhani. Abe was reportedly carrying a tension de-escalation message from President Trump. Since Japan is abiding by U.S. sanctions directives and no longer purchasing Iranian oil, speculation is rife with theories on who is responsible for the attacks and what messages they intended to convey to whom. The array of potential candidates includes the United States, Saudi Arabia, Japan, the Emirates, and even president Rouhani. And here it is worth noting that in addition to the regular Iranian navy, typically deployed to blue water and coastal areas, Iran’s Revolutionary Guard, which answers only to the supreme leader, also maintains elite marine units, whose fast boats are evident throughout the Persian Gulf.

News of the attacks and the immediate fear of escalation sent oil prices up by some 4 percent on Thursday, but markets calmed by close of business, and Friday’s bearish sentiment returned most of the gains. As this week unfolds, we are likely to see additional disclosures on intent and responsibility (oddly in this era of “fake news,” the U.S. intelligence footage of what appeared to be an Iranian military vessel retrieving an unexploded ordinance was met with skepticism, which was further reinforced by the Kukoka crew’s assertions that the attack was airborne rather than a magnetic mine). In the absence of further provocations or incidents, while insurance rates are expected to increase, tanker traffic is expected to continue even as enhanced security measures are being put in place at critical facilities throughout the region. Predictably, suggestions of reflagging, enhanced air surveillance, and convoy escorts are also reportedly under consideration, though implementation of such measures is expensive and logistically difficult. And president Trump’s deployment of an additional 1,000 troops to the region should be viewed as responding to Centcom needs to secure and protect assets rather than an invasion force.

Some have suggested Iran’s deteriorating economic situation (as a result of sanctions), political frustration, and the inability to move oil exports for hard currency, while their OPEC counterparts and others, including Russia and the United States, increasingly absorb market share have pushed the regime to make good on their threat to close the Strait of Hormuz. As colleagues Jon Alterman and Tony Cordesman have noted, Iran sees itself as a regional power and has learned from North Korea’s example of using aggressive and threatening tactics to bring adversaries to the table. Unable and unwilling to comply with Secretary Pompeo’s 12 conditions for negotiations, they may be attempting to regain some leverage in hopes of starting discussions with the United States and others on a different and presumably more beneficial footing.

The counter to that argument is that successful closure of the Strait of Hormuz would undoubtedly be extremely disruptive but also short lived. Oil consumers, from the European Union to the United States, Japan, and China, would not abide such an action, and Iran most certainly would not want to confront a multinational force resolved to reopen the strategic chokepoint. That said, the more predictable course of action would likely involve continued, albeit low level, Iranian marine harassment—enough to slow transit or maybe raise prices but not to the level of inviting large scale retaliation, and renewed threats like walking back selective commitments under the Joint Comprehensive Plan of Action in order to elicit international support for negotiations and de-escalation measures. And here’s where the risk of miscalculation and escalation becomes materially more consequential. (Ironically, closure of the strait would rapidly increase oil prices, the benefits of which would disproportionately accrue to large global producers outside of the Persian Gulf—namely the United States and Russia.)

Assuming no major oil market upheavals, given the heightened uncertainty with respect to both demand and supply, stocks and prevailing prices, OPEC seems destined to extend its current agreement when it meets in Vienna in the coming weeks. That said, sentiment changes can abruptly turn on real supply threats. In any event, OPEC’s stated quest for market stability in what has become an increasingly complex world with no shortage of moving parts and unpredictable actors—remains both fleeting and elusive and likely to remain so for the foreseeable future.

Frank Verrastro is a senior vice president and trustee fellow with the Energy and National Security Program at the Center for Strategic and International Studies in Washington, D.C.