Oil Market Update: Running with the Bulls—at Least for Now…

In previous commentaries, we have consistently highlighted the sometimes contrary/sometimes supportive roles of market fundamentals, sentiment, policy, and events—and how they combine to shape market outcomes, both short and longer term. And this week’s activity is a classic case in point.

For the past month, oil prices had been poised to rally. OPEC’s now eight-month “freeze” is clearly having an impact on accelerating the long-anticipated oil market rebalancing, as over the first half of the year global stocks (or at least those we can count with a high degree of confidence) have declined by some 170 million barrels. Maybe more importantly, on the sentiment side, Saudi Arabia’s decision to reduce exports to the United States over the summer evidenced those reductions directly in U.S. inventories, which had become a focal point for market watchers. 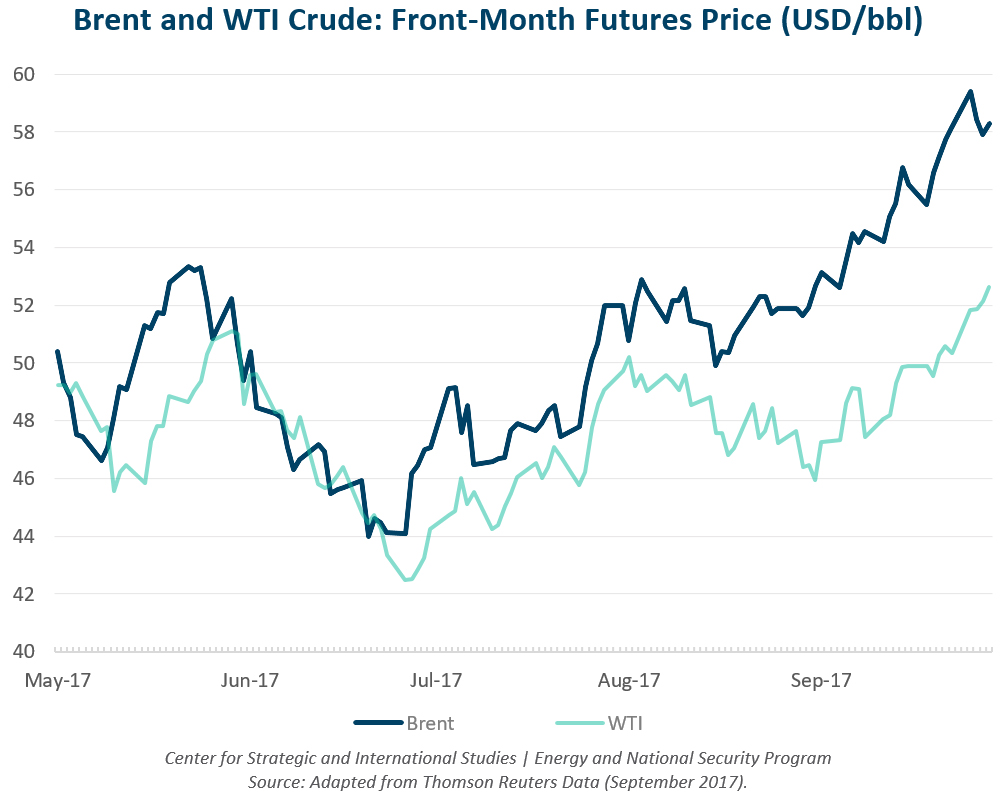 Aiding the stock plunge was strong product demand (which produced attractive refining margins and high utilization rates) and, at least temporarily, production shut-ins from Hurricane Harvey, as well as declines in Venezuelan and other output. Positive projections for demand growth over the rest of the year, coupled with OPEC’s recommitment to improving participants’ compliance and possibly extending the “freeze” beyond next March, continued to feed the bullish sentiment, as did the notion that Nigeria and Libya (currently exempt from the freeze arrangement) were about at maximum near-term capacity. At home in the United States, the widening of the Brent–West Texas Intermediate (WTI) spread created both challenges and opportunities, possibly stalling some new domestic production activity (evidenced in rig counts), even as it opened more export opportunities. Bullish sentiment was also supported by recent geopolitical tensions in North Korea and coincident with the Kurdish referendum, which threatens to disrupt markets further.

In a marked reversal from 2016, when a contango market structure rewarded stock building, tightening fundamentals combined with sentiment has flipped the market into backwardation, where future prices are below current levels. On Monday (September 25) of this week, prices surged to levels not seen since 2015—headed towards $60 per barrel. Hedge fund managers, not surprisingly, have increased their net long positions in both crude and some refined products. The momentum has carried through the week supported by the U.S. Energy Information Administration’s weekly data on crude draws and refinery runs (though some of this is typical for this time of year as refiners increase output to build up product stocks before the turnaround/maintenance season). And predictably, the surge has now been somewhat moderated by both profit taking and concerns that prices in the mid-high $50s will inevitably lead to more producer hedges, increased drilling, and greater supply going forward.

But challenges nonetheless remain. To get close to the five-year average (the global inventory target for OPEC) before the end of the year, global stock levels still need to decline by more than a million barrels per day for the next few months—no easy task. And though we have repeatedly cautioned that the five-year average is a flawed metric (see our earlier commentary, “Oil Price Movements in Perspective,” August 18, 2016), we expect significant stock reductions throughout the rest of the year, while recognizing that higher prices will also have the effect of incentivizing additional supply—either from drilled but uncompleted wells (DUCs) or new wells. And next spring’s refinery turnarounds will also once again reduce crude demand; hence, the rationale for OPEC’s original extension of the production freeze beyond March 2018.

Renewed/unchallenged oil shipments from northern Iraq, a substantial rise in U.S. output, an Iranian challenge to the OPEC alignment, a global demand slowdown, including China during next month’s National Party Congress, or the prospect of higher oil prices slowing down purchases for strategic stockpiling—all could undermine bullish sentiment by reintroducing a supply overhang. Overly optimistic investor hedging is always subject to correction. And OPEC’s eventual “exit” strategy, and how the group reintroduces its frozen offline volumes (now in excess of 1.5 million barrels per day, or 2 million if we include the Neutral Zone), will prove pivotal to the longer-term trajectory and stability of prices and markets.

The current oil market is feeding on only bullish news at the moment with bears in slight retreat—at least for now.

© 2017 by the Center for Strategic and International Studies. All rights reserved.
Photo credit: BILAL QABALAN/AFP/Getty Images