OPEC: Back from the Depths, But Challenges Remain

Commentary by Ben Cahill and Frank A. Verrastro

At a drama-free virtual gathering last weekend, the Organization of the Petroleum Exporting Countries (OPEC) and the broader OPEC+ group agreed to extend current production cuts by another month, through July. With Mexico now excluded, the targeted production cut for June and July is 9.6 million barrels per day (b/d) below October 2018 levels, falling to 7.7 million b/d for the rest of 2020 and to 5.8 million b/d from January 2021 to April 2022. The duration of this deal is unusual for OPEC. But it will be revisited throughout this period, and future adjustments are very likely.

The current OPEC cut is the largest in history, and so far, production restraint appears to be working. U.S. inventory builds have slowed since the rapid stockpiling earlier this spring, and West Texas Intermediate (WTI) crude prices have nearly doubled since late April, nearing $40 per barrel as of June 9. Both ICE Brent and Nymex (WTI) crude prices are still in contango—with future prices exceeding current prices, signaling weak demand from refiners, and providing strong incentives to store oil—but the contango has narrowed significantly. OPEC hopes the market will soon flip to backwardation, with stronger front-month prices helping to drain enormous inventories (although inventory draws will reduce demand for new supplies).

On June 8, Saudi energy minister Abdulaziz bin Salman cited “good indicators that demand is coming back and thriving”—and much of this optimism stems from China’s recovery. According to official customs data, China’s oil imports surged to an all-time high of 47.97 million tons (11.3 million b/d) in May, and independent refiners increased their run rates to 78 percent last month (Oilgram News, S&P Global Platts, June 10). The strong recovery in China—where oil demand dropped by as much as 40 percent in February—has optimists convinced that global oil demand will rebound later this year as more economies reopen.

OPEC has hardly declared victory but seems more comfortable with the outlook for the second half of 2020. Saudi Arabia has increased its official selling prices for July exports for all regions, and Abu Dhabi followed suit. Riyadh and several other Gulf states also plan to end their additional cuts of 1.2 million b/d in July. Hopes for a strong second half are reflected in the International Energy Agency’s outlook, which envisions a nearly V-shaped recovery that would create global stock draws as soon as the third quarter (see chart below).

While the worst of the demand shock appears to be over, a smooth recovery is unlikely. First, there is a risk of extrapolating too much from China. Much of the increase in crude imports over the last two months is due to opportunistic buying for both refinery and strategic stocks. China’s independent refineries, which have benefited from easier access to import licenses this year, had strong incentives to ramp up crude buying when prices were low. Refiners in China also benefit from rules that place a floor on product prices when crude prices hit $40 per barrel, boosting refining margins as the oil price drops. In short, even with a strong recovery in Chinese industrial and transportation demand, crude imports and refinery runs should taper in the coming months.

Across most of the world, refining margins remain very weak and will shrink if OPEC and non-OPEC supplies ramp up in the coming months without a corresponding increase in product demand. Higher sales prices from Middle East producers to the all-important Asia market could harm demand. Another obstacle is the glut of product inventories in many markets, especially for diesel and jet fuel due to depressed economic activity and lack of air travel. Efforts to cut jet fuel production have forced refiners to produce more diesel, adding to inventories. The outlook for gasoline is brighter, but in the United States, gasoline inventories in the past month have remained well above the five-year average. 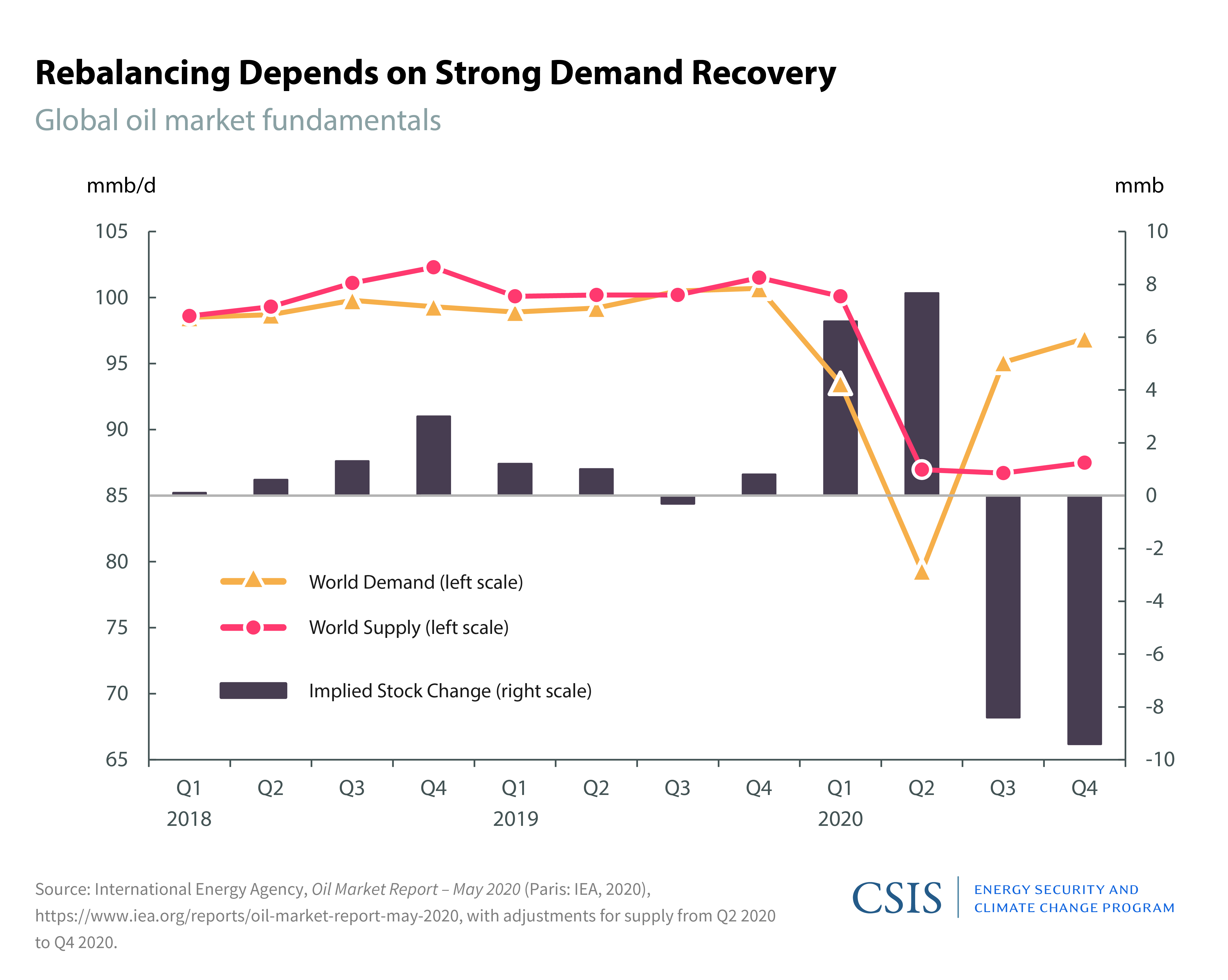 More broadly, it is impossible to predict how Covid-19 will affect oil demand in the second half of 2020 and beyond. Lockdowns, restrictions on travel, and preferences for telecommuting seem likely to continue for months in much of the world, perhaps until a vaccine for the novel coronavirus is developed. A spike in infections in any number of countries could have severe effects on demand. Without sustained increases in oil demand, the risk is that even modest increases in production will inevitably lead to bloated inventories, which will need to be worked off to sustain higher prices. The inventory overhang partly explains why Brent crude prices have not risen far beyond $40 per barrel in recent weeks. 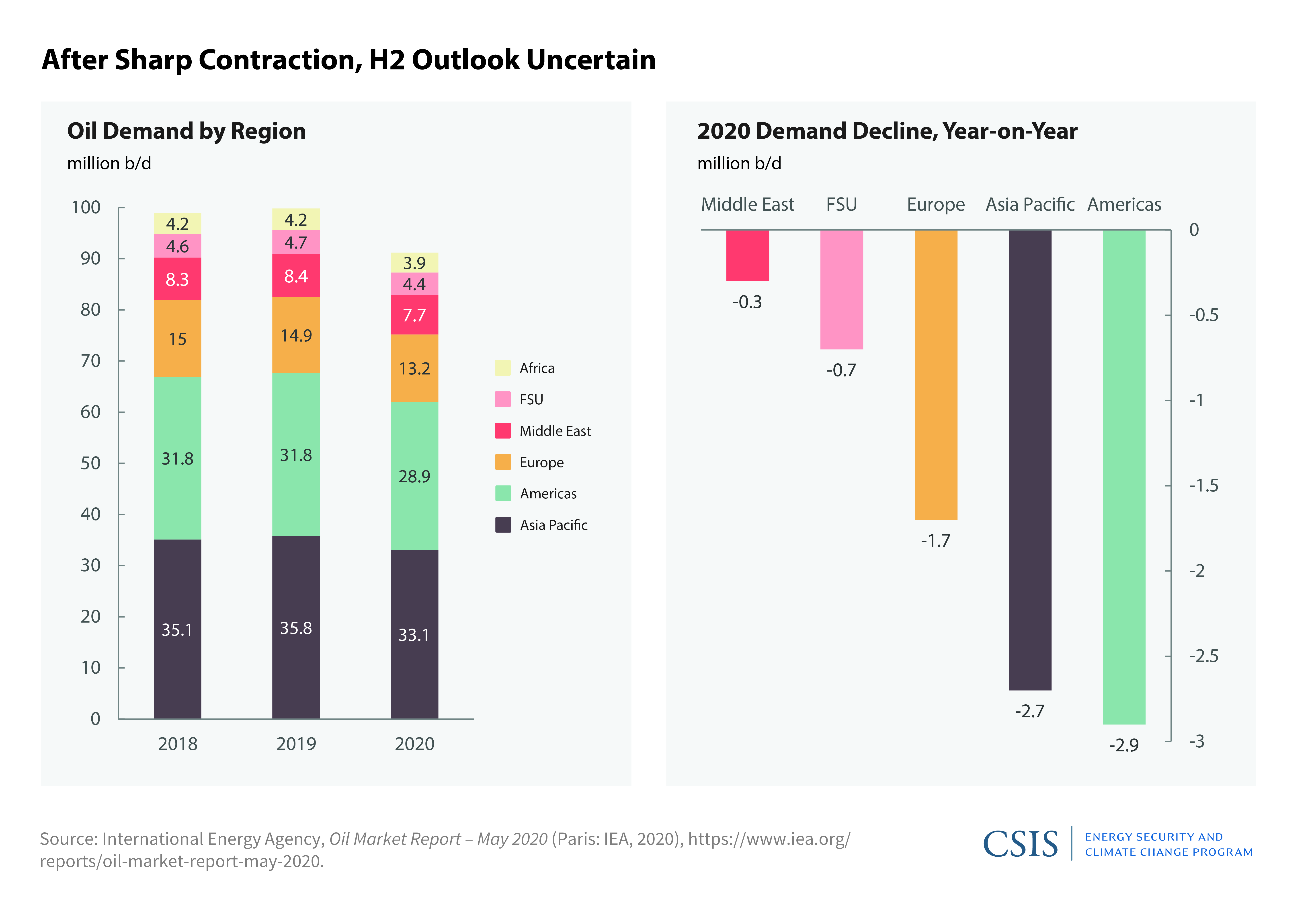 Internal and External Challenges for OPEC+

Facing an unprecedented demand shock, OPEC+ has pulled together to reduce the supply surplus, and compliance last month was strong. The 10 core OPEC states met about 85 percent of the targeted cuts. (Iran, Venezuela, and Libya are exempted.) Russia, surprisingly, has nearly met its target of around 8.5 million b/d, perhaps because its key export markets have taken such a hit. The Joint Ministerial Monitoring Committee (JMMC) of OPEC+ will now meet monthly to gauge market conditions and enforce the party line on compliance.

But as ever, OPEC countries will be tempted to cheat, especially as oil prices rise. Laggards in the OPEC+ group include Angola, Nigeria, Kazakhstan, and especially Iraq, which reported production volumes of 4.21 million b/d in May—well above its agreed target of 3.59 million b/d. Last weekend’s OPEC statement stressed that countries that fail to meet targets in May and June will have to make even deeper cuts from July to September to make up the difference. Longtime OPEC observers realize this amounts to magical thinking. Iraq, in particular, has routinely failed to meet its targets, and a new government facing financial strains and political pressures will have incentives to generate as much revenue as possible. Outside the bounds of the agreement, Libya’s evolving security situation could also allow a gradual increase in output, although any gains could be subject to sudden reversals, depending on control of fields and export terminals.

Finally, OPEC will continue to grapple with the uncertainties of U.S. shale. The rig count across all basins continues to show steep declines, with 141 active rigs in the Permian Basin as of June 5, down from 403 at the start of the year. From a peak of around 13 million b/d in February, the Energy Information Administration estimates that U.S. output fell to 11.4 million b/d last month, although production could actually be far lower. Already, however, there are signs that stronger prices will lead to marginal production increases, as struggling companies seek to boost cash flows. This is perhaps to be expected, given the scale of retrenchment in the past few months. Without a durable increase in WTI prices to at least $45 to $50 per barrel, most companies fail to generate free cash flow, and investors are demanding capital restraint. But with regard to the United States, OPEC faces a familiar problem: the oil price most OPEC states need to manage their economies is high enough to incentivize more shale production.