Is OPEC Playing a Losing Hand?

Oil prices have taken a momentary pause from their 2019 tear. Brent crude now stands around $70 a barrel, reflecting a near 40 percent increase since the start of the new year. Resilient demand growth, a temporary leveling in U.S. production, strong Organization of Petroleum Exporting Countries-plus (OPEC+) compliance, and disruptions in Venezuela converged to bring the market into a supply deficit since February . The supply side, in particular, saw a dramatic reversal of course with OPEC production falling by nearly 3 million barrels per day (b/d) from November 2018 to March 2019. OPEC+ is now 126 percent compliant with its production agreement, attaining conformity as it did during the 2017-2018 curtailment. At first glance, this bodes well for the group’s ability to influence the market. However, a close look at the data and a consideration of U.S. driven dynamics, show a different reality: the group’s hand looks weak, but several factors outside of their control may just continue to play out in their favor.

In December 2018, OPEC+ agreed to collectively cut 1.2 million b/d from the market from January through June 2019. This followed a significant ramp-up in supply commencing in June 2018 when the group decided to relax individual quotas and return to the overall rate of conformity of the previous agreement on the back of rising prices. However, that decision in part caused the market to fall out of balance again and instigated this new round of cuts. As shown in the graph below, the cohort achieved full compliance with the new agreement in March, by collectively reducing production by 1.5 million b/d from October 2018 levels (the baseline for the curtailment). 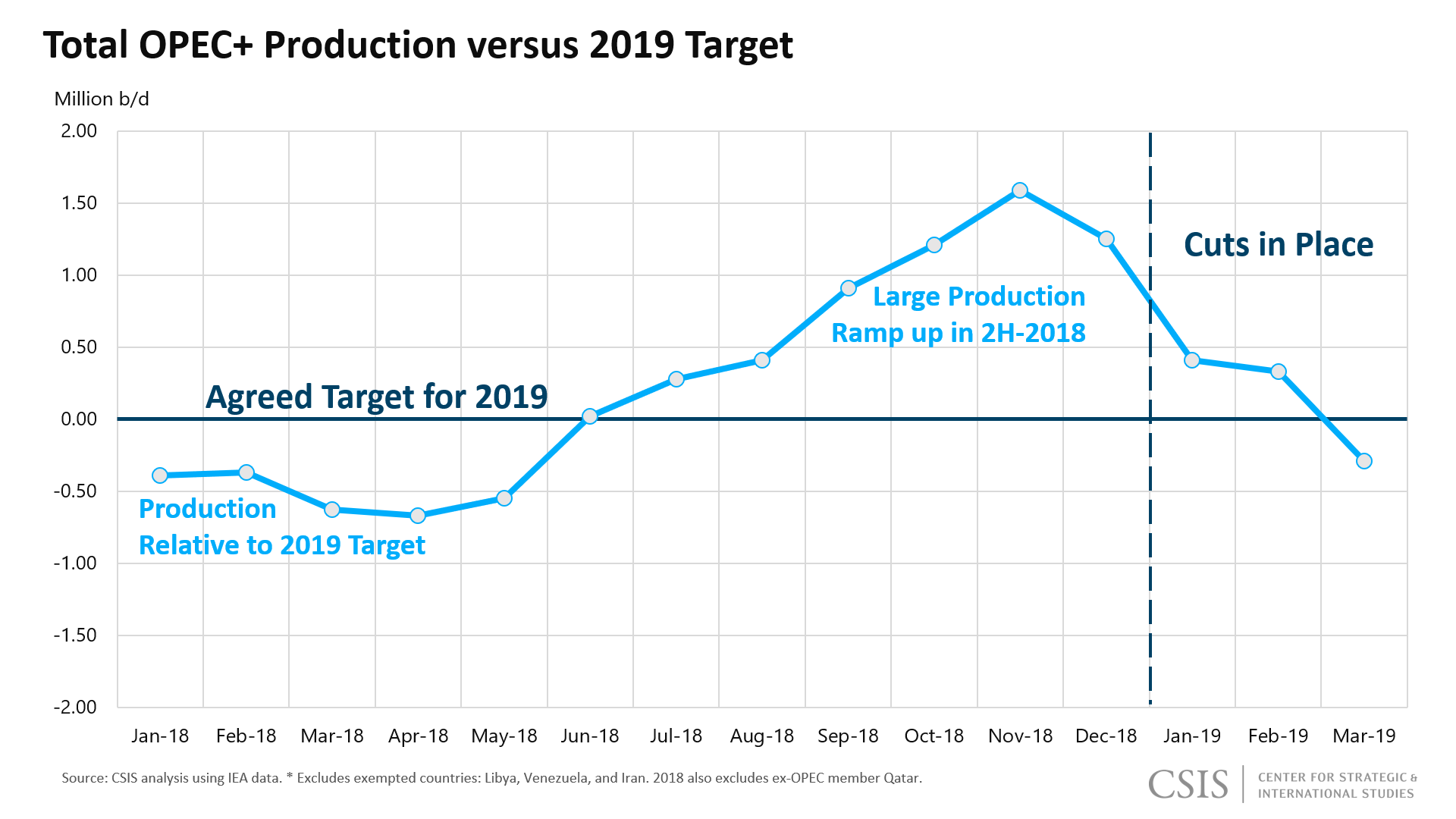 Breaking things down on a country by country basis, however, it quickly becomes apparent that overall compliance rates are far from straight forward. For the moment Saudi Arabia is doing the heavy lifting for the group, providing 560 thousand b/d to the overall 1.06 million b/d reduction that the group has achieved to date. The UAE and Kuwait are also cooperating, collectively contributing a 210 thousand b/d cutback. The other members are doing rather little, bar involuntary cuts from Angola and Mexico, yielding a combined 150 thousand b/d reduction. While Russia is moving toward compliance, so far it has provided just 80 thousand b/d or 0.7 percent of its output to the task at hand. 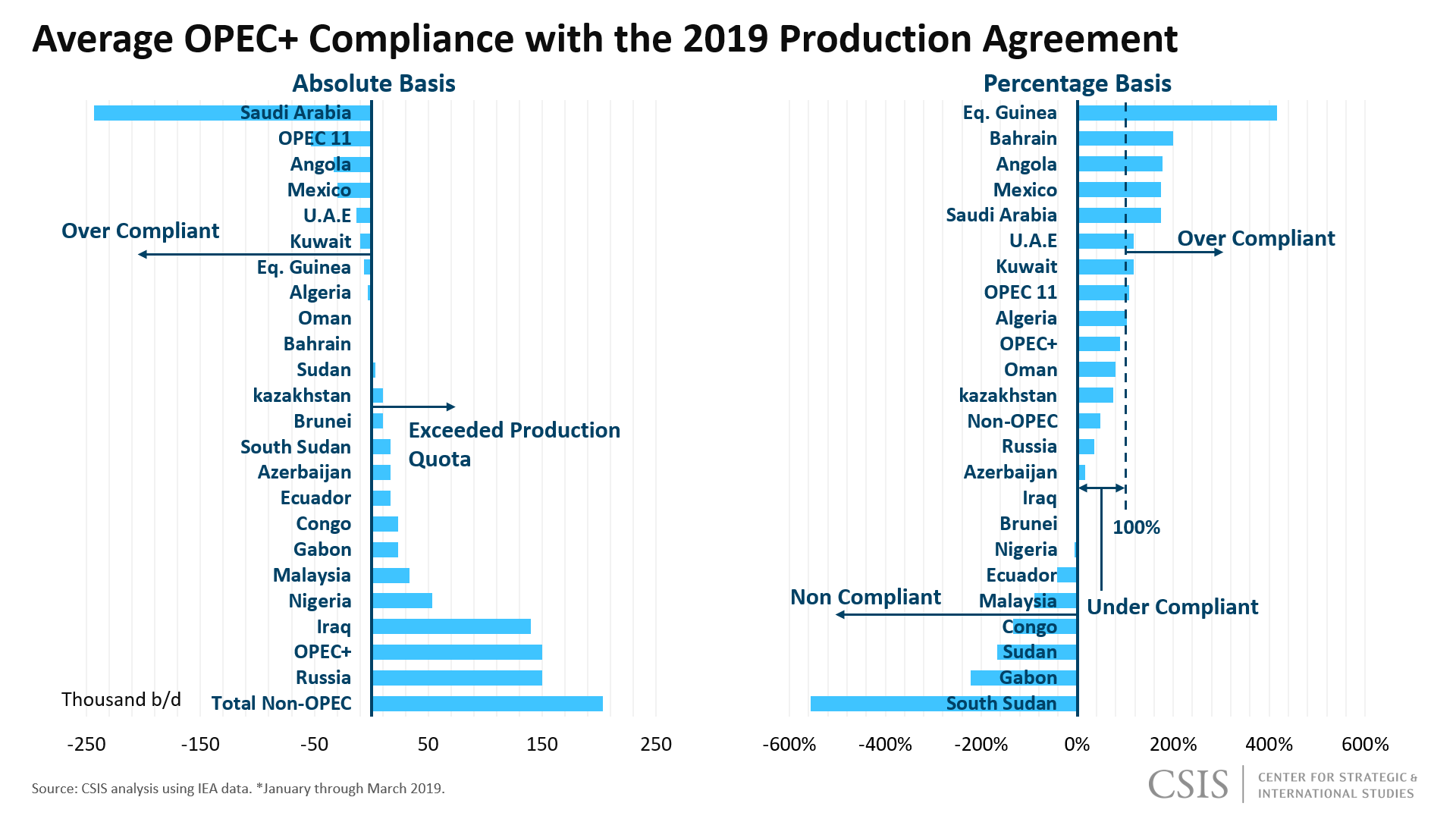 While it may appear that Saudi Arabia, the UAE, and Kuwait shoulder an unfair share of the burden here, their production increase leading up to the agreement provides important context. As illustrated in the left-hand chart below, these countries in addition to Iraq and Russia experienced a significant ramp-up in the second half of 2018, peaking toward October. As a result, these members cut production from a high base and so reaching compliance is less of a demand than it may initially appear. However, based on spare production capacity data, Saudi Arabia, the UAE, and Kuwait can likely hold the high level of output attained in October over an extended period, but for Iraq and Russia, their increase appears more akin to a short-term, unsustainable surge. 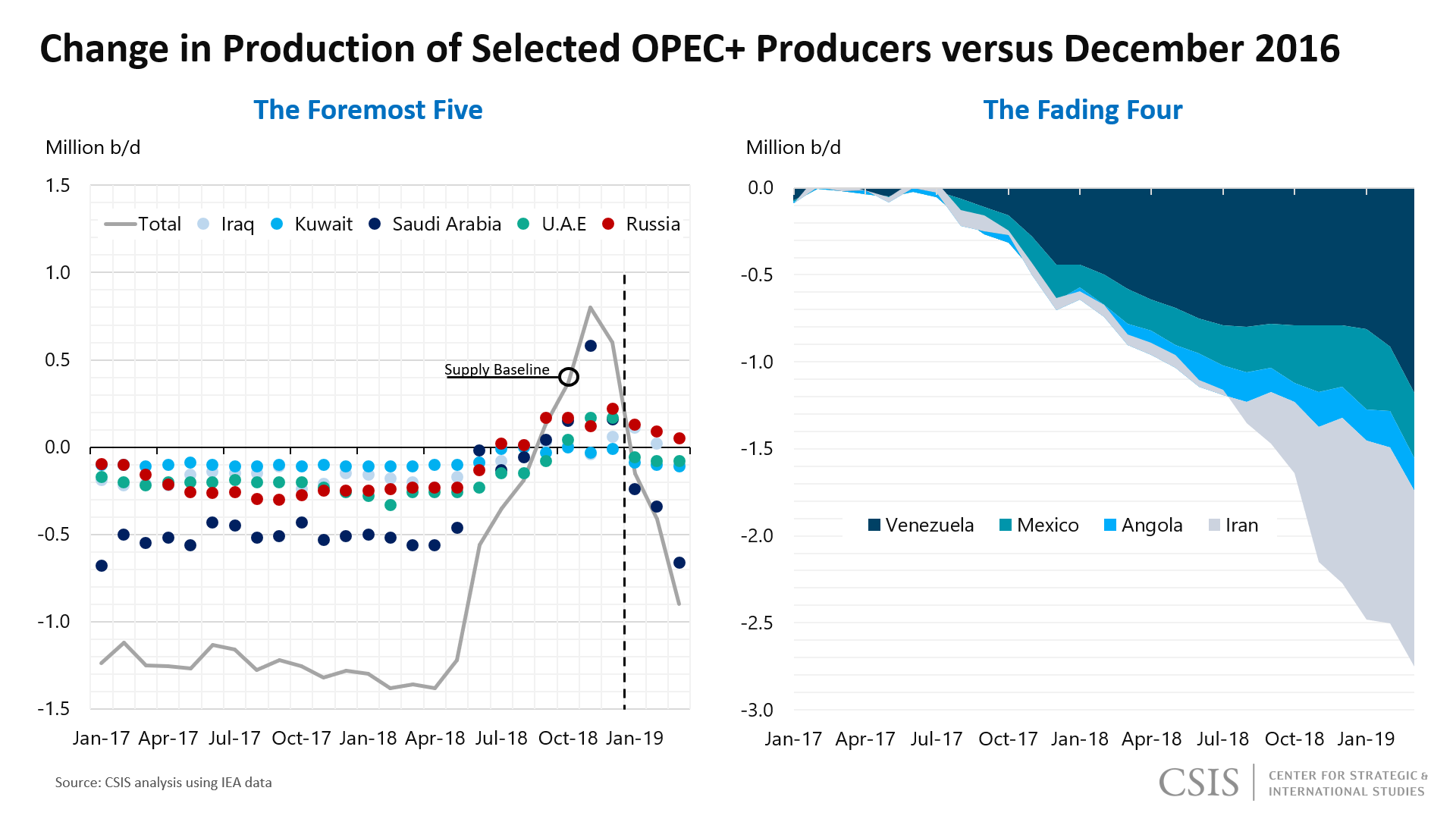 Beyond these countries, the exempted OPEC members of Iran and Venezuela continue to inadvertently help the organization along its way in curbing supply. If included, the two countries combined have provided an astonishing 780 thousand b/d reduction to the current curtailment. The trajectory for both producers improves the outlook for the rest of OPEC+ in the short term. However, this should also be a major cause for concern for the organization because, despite the massive supply disruptions and losses between Venezuela, Iran, Mexico, and Angola, which amounts to nearly 2.8 million b/d versus December 2016 (see above), the group is still holding back output.

Many of the points outlined above also hold true under the previous OPEC+ agreement. While the group took longer to attain full compliance last time around, it eventually reached its target by August 2017. The cohort subsequently became over compliant, peaking at 144 percent by April 2018, but things quickly reversed course by the end of June after relaxing individual quotas. 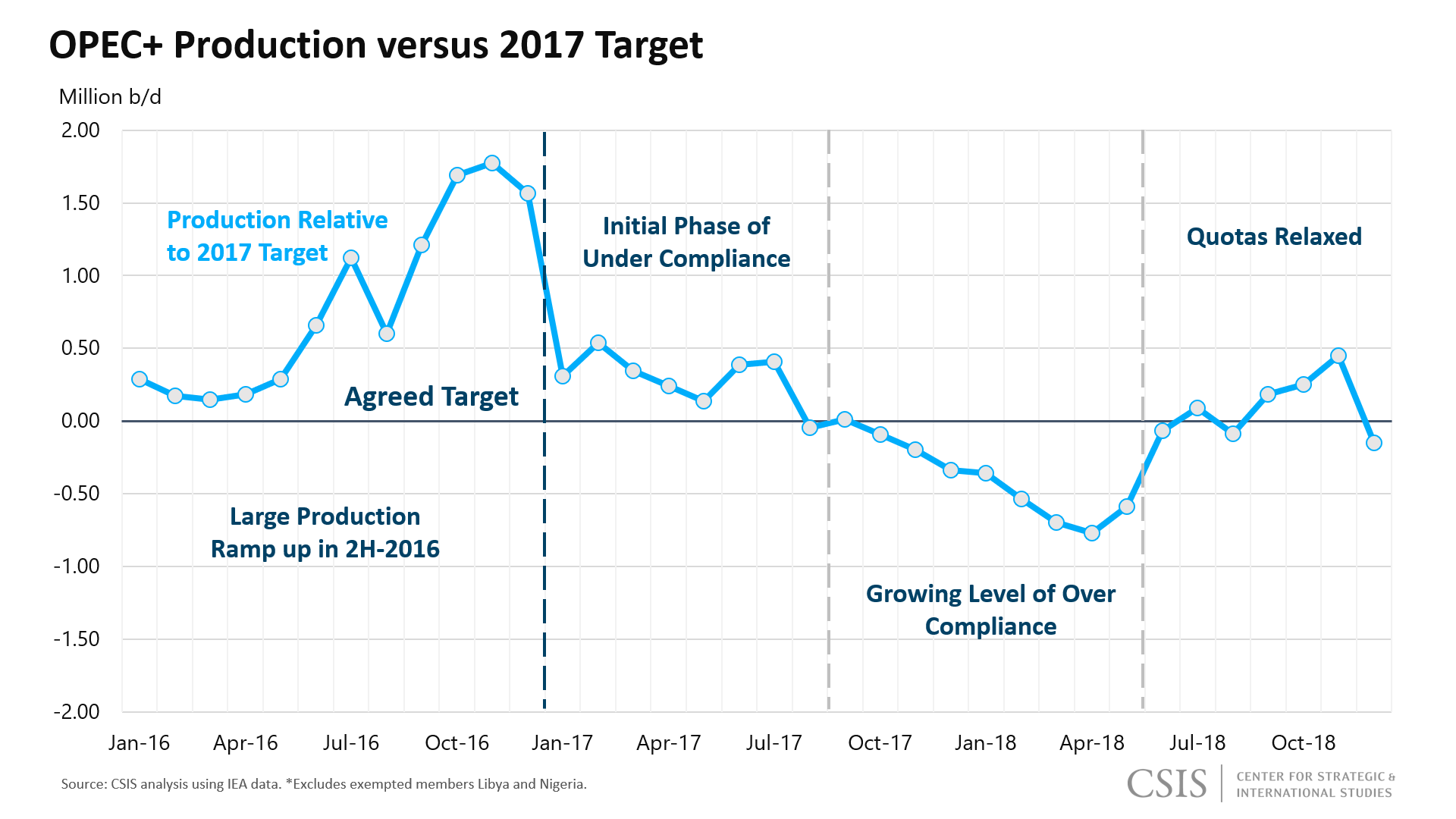 Once again at face value, it may appear that OEPC+ successfully reined in production and only returned to non-compliance on the back of growing supply concerns due to U.S. sanctions on Iran and sustained losses in Venezuela. However, the data breakdown shows us that there is more than meets the eye here with multiple producers surpassing or falling short of their agreed target. Like the current cut, the group experienced a significant surge in production running up to the agreement, similarly led by Saudi Arabia, Russia, Iraq, the UAE, and Kuwait. This allowed these countries to cut from a much higher base to that of their average level of output. However, the ramp-up by the Gulf states lasted several months by bringing spare capacity online, while Iraq’s and Russia’s were very short-term surges that once again was likely not sustainable. 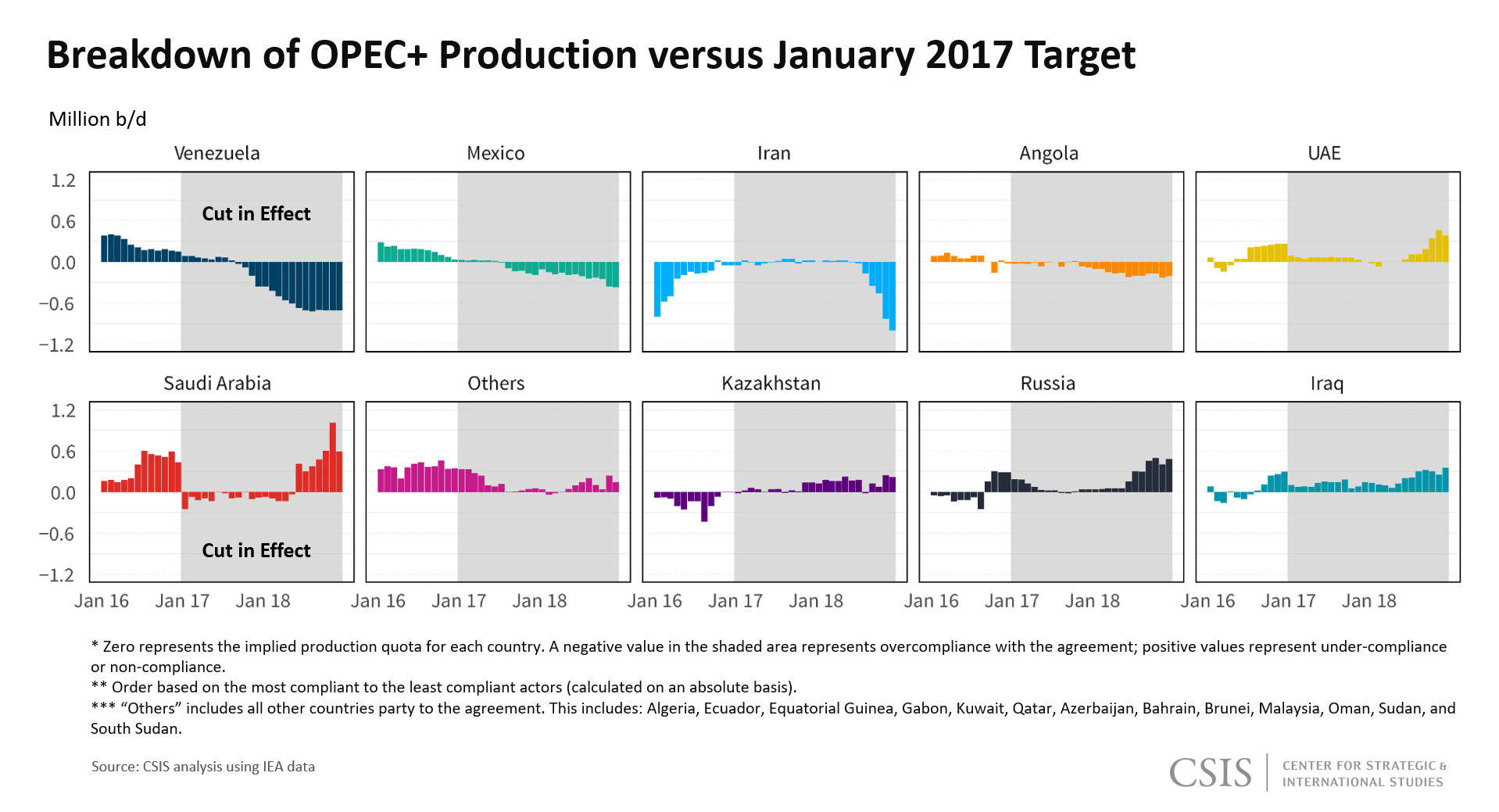 The group also received hefty support from involuntary cutbacks. As illustrated in the chart above, most countries produced more than their quota during the initial period of the agreement. The notable exception to this was Saudi Arabia, which cut beyond its target for much of 2017. It was not until August 2017 that the group reached full compliance, with Mexico and Angola experiencing significant losses in supply. From September through April, the group’s rate of compliance increased significantly despite Russia’s return to under-compliance, significant production gains by Kazakhstan, and sustained under-compliance by Iraq. The primary reason for this was the massive production losses in Venezuela. Without Venezuela’s decline (and all other things being equal), the picture by June 2018 would have looked considerably different. Excluding additional production losses by OPEC members Angola and Iran and non-OPEC Mexico, total output never reached conformity. 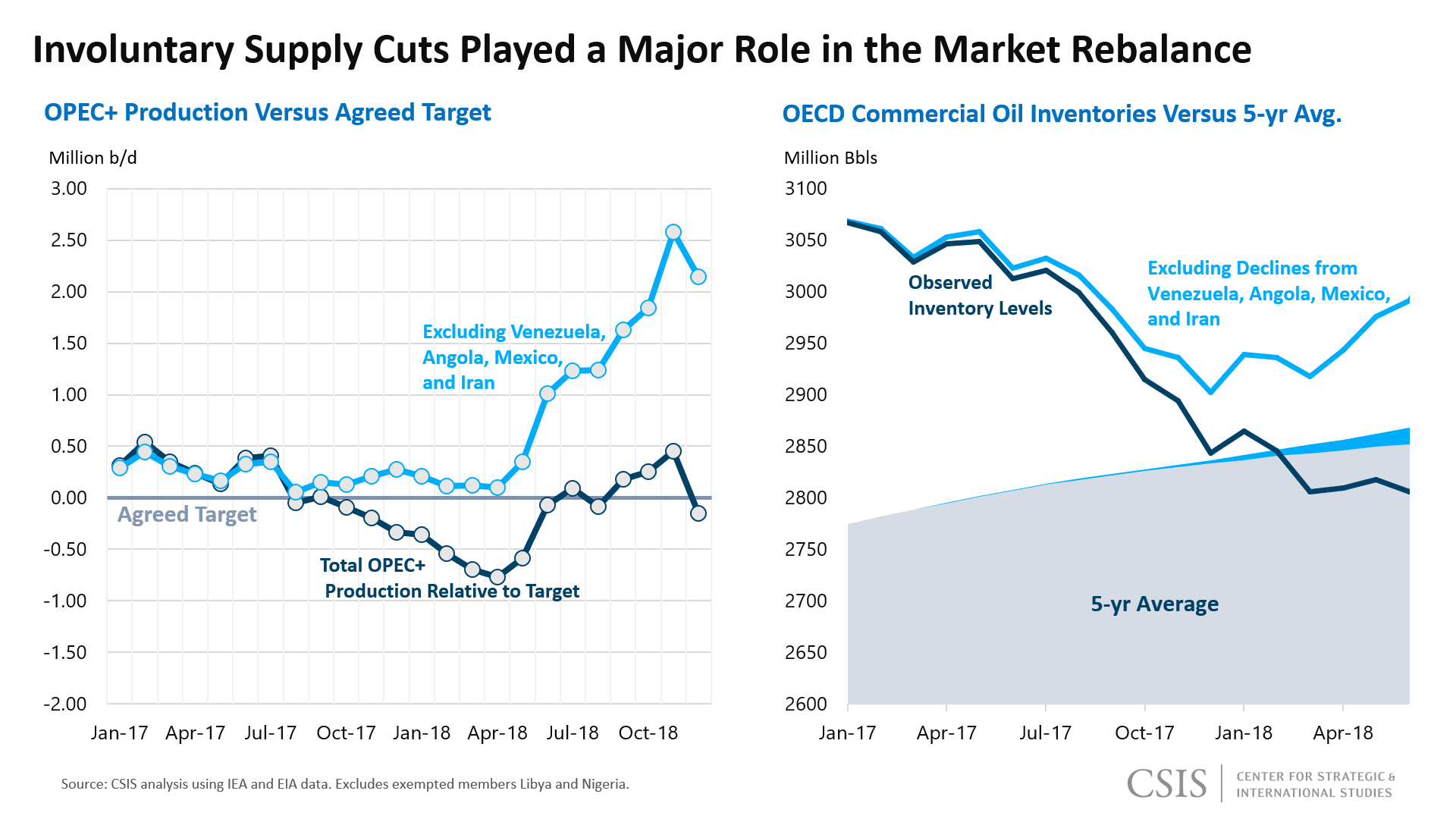 Due to these production losses, Venezuela, Mexico, Angola, and Iran were the most compliant actors with the agreement. The only other parties to achieve full compliance were small producers such as Qatar, Equatorial Guinea, Bahrain, Brunei, and Sudan, most of which was likely involuntary. On the other end of the spectrum to these most compliant actors is Kazakhstan, as it added 3.5 times the volume it pledged to cut. Malaysia and South Sudan (part of “others” below) also finished in negative compliance territory. However, on an absolute basis, Iraq and Russia, along with Kazakhstan were the least compliant actors both before and after the relaxing of individual quotas. 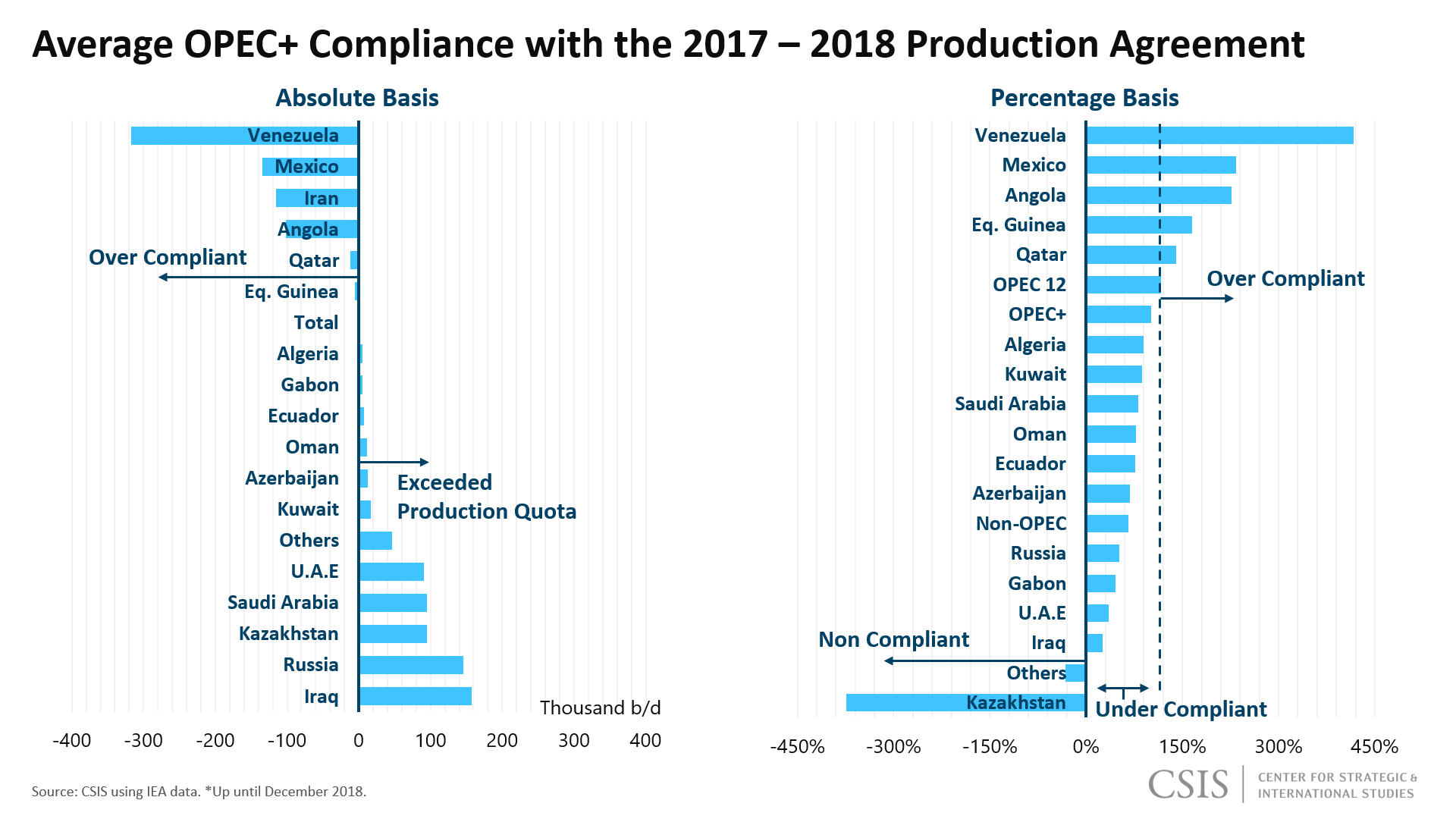 These dynamics do not paint a rosy picture for OPEC+’s influence in the market; however, several factors improve the outlook in their favor for the next several months. First, the largest producers (i.e., Saudi Arabia, Russia, Iraq, the UAE, and Kuwait) have cut production from a high base and so sustaining compliance out to the end of June is an achievable task. Most consequentially, however, is the production outlook for Venezuela and Iran. While the exempted pair do not contribute to compliance rates, both countries’ production declines have helped to reduce the number that ultimately matters most—OPEC’s total output. Venezuela’s production continues to falter due to U.S. sanctions and power outages, while further declines from Iran look inevitable given the administration’s decision not to renew waivers. In short order, exports from both countries will fall coming into a period of seasonally higher demand.

While these factors improve the outlook for the rest of the group in the short run, by helping to curb supply at the same time, they also illustrate its lack of control. Despite these disruptions that have removed massive quantities of production, OPEC+ is still cutting. As a result, the group’s share of global oil production is 4 percent lower than it was just three years ago. Additionally, the United States’ hand in the market has strengthened at the group’s expense. The U.S. administration holds significant sway over what happens to Venezuelan and Iranian exports via its control over sanctions. It also holds leverage over OPEC, by the threat of the No Oil Producing and Exporting Cartels Act (NOPEC), and Saudi Arabia more broadly, given the complex array of issues in the bilateral relationship, and may use that leverage, just as it did last year, to push the group towards relaxing its production cuts. While this will work to the detriment of some members, it may prove to be a positive outcome for those with spare capacity. It provides an opportunity to bring on additional volumes at a higher price level. By doing so Saudi Arabia, in particular, can appease the administration’s demands and thus help maintain its trusted ally status.

Beyond the immediate run, however, what these recent events continue to highlight and should remain the most concerning factor for OPEC+, is the immense surge in U.S. shale production. It has nearly doubled over the past five years at an average price of just $60 WTI. While U.S. producer activity tapered off over recent months due to the price dip below $50 a barrel at the end of 2018, pipeline capacity additions on the way in Texas and the higher price level currently may reopen the door for more rapid U.S. production gains later in the year and into 2020. This could eventually force the market out of whack and lead OPEC+ to reconvene.

But for right now we’re at the showdown, and the stakes are high. While the U.S. hand looks strong and OPEC’s weak, the market holds all the wildcards here. Any more supply disruptions and prices could quickly spike. 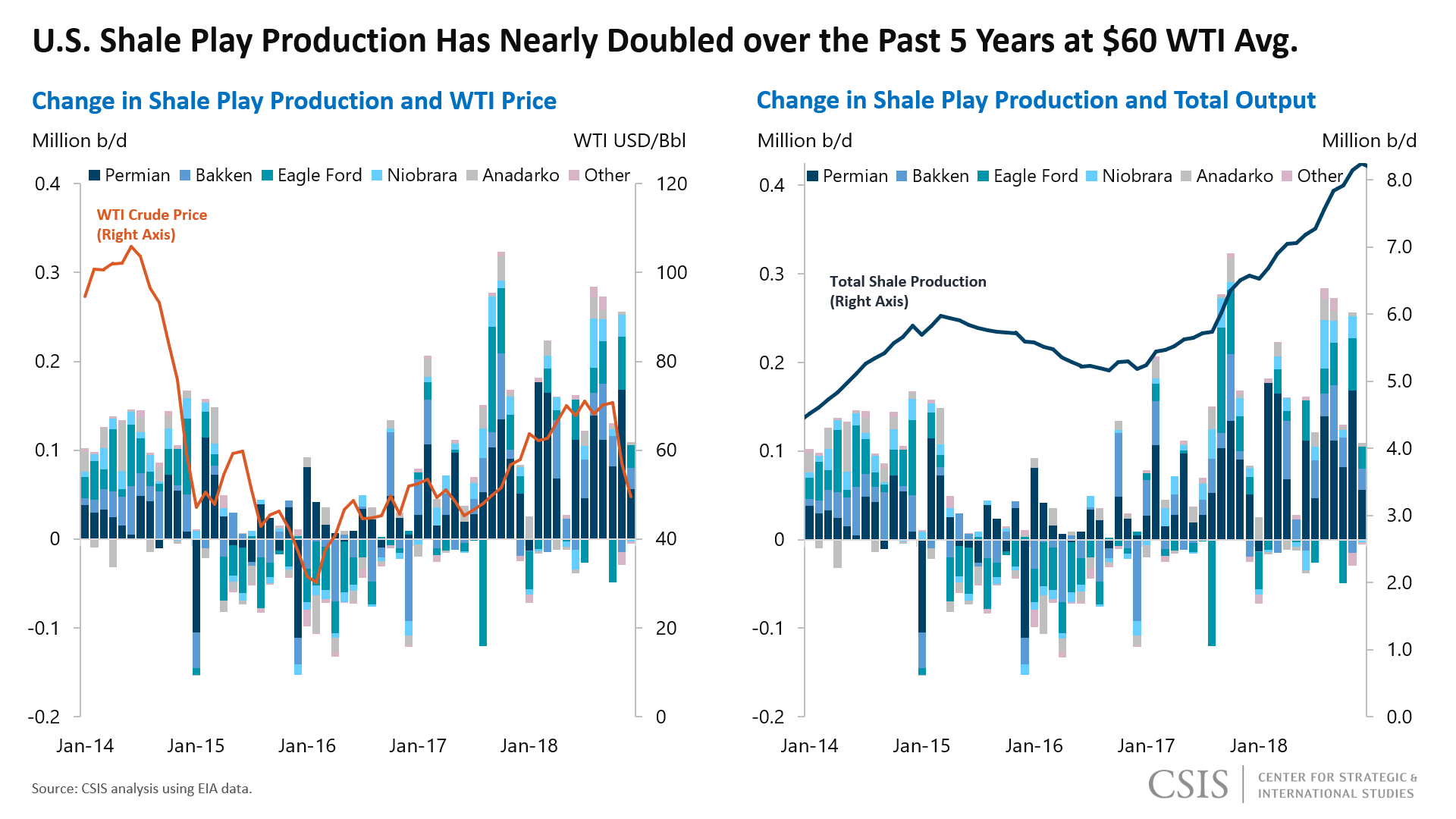 Andrew Stanley is an associate fellow with the Energy and National Security Program at the Center for Strategic and International Studies in Washington, D.C.