One should not be surprised when Nauru, a nation of less than 10,000, is offered $50 million from Russia. Nor should the opening of diplomatic missions from Georgia, Iran, and the United Arab Emirates in the South Pacific be remarkable when considering what is at stake. An economist might say that a market has emerged for purchasing votes at the United Nations.

As an unintended consequence of the UN system, at least 11 independent Pacific Island nations have found themselves in a unique position: they each have a vote at the United Nations and yet, because of their isolation, have little or no national interests in many of the distant disputes that fill the UN’s agenda. With what is effectively a surplus of ‘unused’ votes, a market has been created where the service of voting at the UN is exchanged for monetary assistance.

For these island nations of the Pacific, their isolation and relatively small size have created developmental challenges. In response, aid has become big business. In 2009, these Pacific countries received one of the highest regional levels of per-capita aid, totaling $184 per person. Although the more resource-rich Pacific nations like Papua New Guinea and Fiji depend on aid for less than 5 percent of their gross national income, other states such as Tuvalu and the Solomon Islands depend on foreign assistance for upwards of 40 percent of their national income.

With such high levels of dependence on foreign aid, Pacific Island nations have sought to diversify their income sources away from traditional donors such as Australia, New Zealand, and the United States in the name of increased sovereignty. The result is that, over the past four decades, the island nations have actively encouraged the formation of an “aid market.”

The China-Taiwan rivalry is one of the best examples of this “market for votes” China and Taiwan have competed for diplomatic recognition in the South Pacific since the mid-1970s. Although there has been a “truce”` between the two governments since 2008, the competition has retained much of its former character, with both states maintaining a strong aid presence. In 2009, it was estimated that Beijing’s aid in the South Pacific, including both grants and concessionary loans, totaled $209.9 million, while Taiwan’s was $60-$90 million. Currently, China is the third-largest donor in the South Pacific, trailing only Australia and the United States.

The China-Taiwan rivalry highlights several unintended consequences of the competition for aid and influence in the South Pacific. First, these aid transactions have not been transparent. This has less to do with undermining Western development efforts and influence and more to do with market-based incentives. By not disclosing the details of their aid donations, both China and Taiwan hope to create a situation of imperfect information and pay below market price for the countries’ UN votes.

Unfortunately, the lack of transparency means that the aid money is at risk of being embezzled, or used to corrupt domestic political systems in favor of incumbents, or even to fund violence.
Second, China’s growing emphasis on concessionary loans should be viewed with some concern. An estimated $183.2 million of China’s $209.9 million in aid in 2009 was in the form of soft loans. Particularly worrisome is that some states have overextended themselves with soft-loan debt—for instance, the Kingdom of Tonga holds debt equal to 32 percent of its GDP. The most prominent example is probably that of the Cook Islands, which took a Chinese loan to host the South Pacific “Mini Games,” only to have its credit rating downgraded in 2009 as a result.

One reason China may be using this soft-loan strategy instead of simply issuing grants could be to use the debt as leverage in the future, either when the truce with Taiwan is called off or any time China decides to call in a favor. Although many of these island nations believe that their debt will be forgiven, such leniency seems unlikely given the leverage it provides China. Instead, it seems that these loans, taken in the name of greater autonomy, may actually be causing Pacific Island countries to give up sovereignty to their creditors.

For traditional regional leaders Australia and New Zealand, this market for votes clearly poses a security threat. Both have pushed for greater transparency in the provision of aid, and these efforts have resulted in signs of a diminishing emphasis on checkbook diplomacy and a greater emphasis on infrastructure projects in the region. Nevertheless, the potential for instability remains. The lack of transparency in grant-giving has too often resulted in money being funneled to violence, as happened in 2000, when a $25 million Taiwan grant was used to fuel violence in the Solomon Islands, and again in 2006, when Chinese aid likely supported the coup in Fiji.

Although the creation of a market for UN votes corrupts the international system to some extent, it is difficult to begrudge the small, isolated Pacific states for selling one of their most highly valued assets for aid. However, it is in the long-term interests of the United States, Australia, New Zealand, and the peoples of the Pacific to ensure that aid and loans are used to their full potential—to fund development projects rather than fuel corruption, violence, and unsustainable economic burdens. As one of the traditional regional leaders, the United States has a great deal of soft power in the South Pacific and it would be in all parties’ interests for it to use this political and social clout to press the islands’ donors to be more responsible with their assistance.

Gregory Poling is a research assistant, and Elke Larsen a researcher, with the Pacific Partners Initiative at the Center for Strategic and International Studies in Washington, D.C. 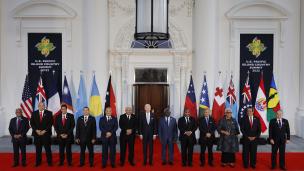 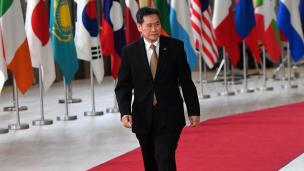