Patterns of Dissent in Russia’s Regions

Does the Kremlin have its groove back? An “all-Russian” vote (obshcherossiyskoye golosovaniye) on amendments to the Constitution that would allow Vladimir Putin the option to remain in power through 2036 passed handily on July 1: 78 percent of voters supported the amendments at a turnout rate of 69 percent, according to the Central Election Commission, representing an absolute majority of voters. But the president has as much reason to worry as to celebrate. Gross electoral violations painted a rosier picture of his support than exists in reality, and the exercise provided further evidence of a sharpening political divide along Russia’s center-periphery vector. As the Kremlin recoups its authority after retreating from public view for much of the coronavirus, its next political challenge may be managing dissent in two emerging protest belts in Russia’s Arctic and Far East regions.

The execution of the referendum showed that Putin’s legitimacy rests on shakier ground than the official results might suggest. The votes were organized as a yes-or-no measure that combined a controversial clause to reset the president’s terms with a basket of more mundane, populist measures such as enshrining the historical significance of World War II. However, a Levada poll conducted June 27-28 found that support for the reset was only 52 percent, with 33 percent strongly opposed and 11 percent somewhat opposed. Widespread reports of ballot box stuffing, multiple voting, and other falsifications led election monitoring organization Golos to call the vote the most unfair in decades. In a telltale sign that regional officials rounded up their vote tallies, the distribution of support was clustered at 5 percent intervals, according to research by physicist Sergei Shpilkin, who posits that support for the amendments was actually 65 percent and turnout 45 percent, meaning only 30 percent of eligible voters supported the amendments.

Even by official tallies, voting patterns in Russia’s northern and eastern periphery give Moscow further reason to worry. In Russia’s Arctic region, defined in state strategy documents as vital to the country’s strategic and economic future, voter turnout and support for the amendments was significantly below the national average. Nenets Autonomous Okrug (NAO), the site of protests in May over a scrapped plan to unite with neighboring Arkhangelsk Oblast, was the only region in Russia to reject the amendments outright, with 55 percent voting against. But in Arkhangelsk Oblast and Komi Republic, only 65 percent of voters gave their support—well below the national average of 78 percent. In nearby Murmansk Oblast, support was even lower, at 62 percent, while turnout was among the lowest nationally at 45 percent.

A similar picture emerged in the Far East, the geographic front of Russia’s “pivot east” and the intended beneficiary of an enhanced Russia presence in the Asia-Pacific. In the Republic of Sakha (Yakutia), just 58 percent supported the amendments, the second-lowest level in the country after NAO. This vote share was even lower than in the 2018 presidential election, where only 64 percent of voters in Yakutia held a favorable attitude of Putin. In Kamchatka Krai, Magadan Oblast, and Khabarovsk Krai, only 62 percent voted in support of the amendments. Turnout in the Far East was also low at 55 percent in Yakutia and Magadan Oblast and just 44 percent in Kamchatka Krai, Khabarovsk Krai, and, to the southwest of Yakutia, Irkutsk Oblast. 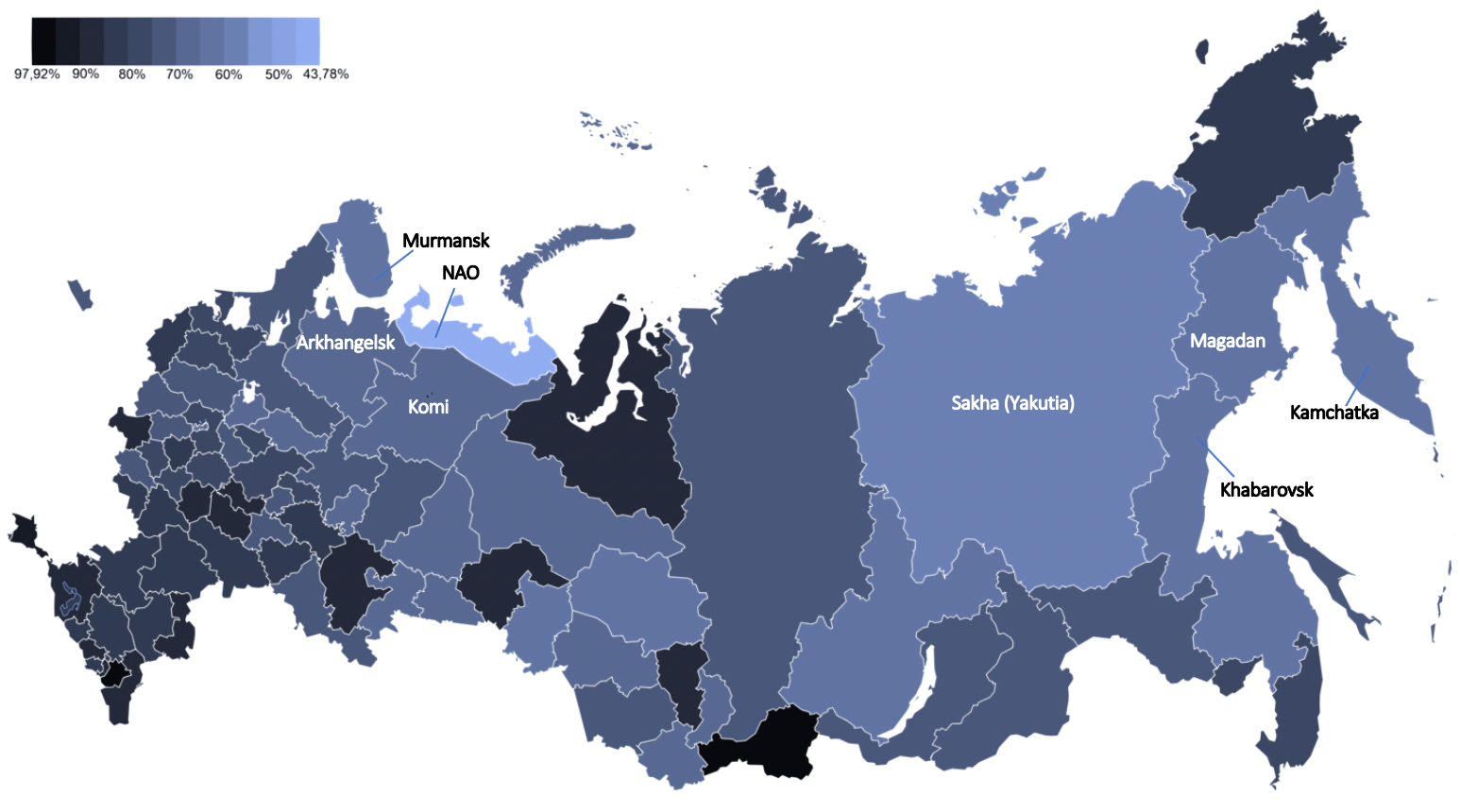 Turnout in the Russian Constitutional Vote in 2020 by Federal Subjects 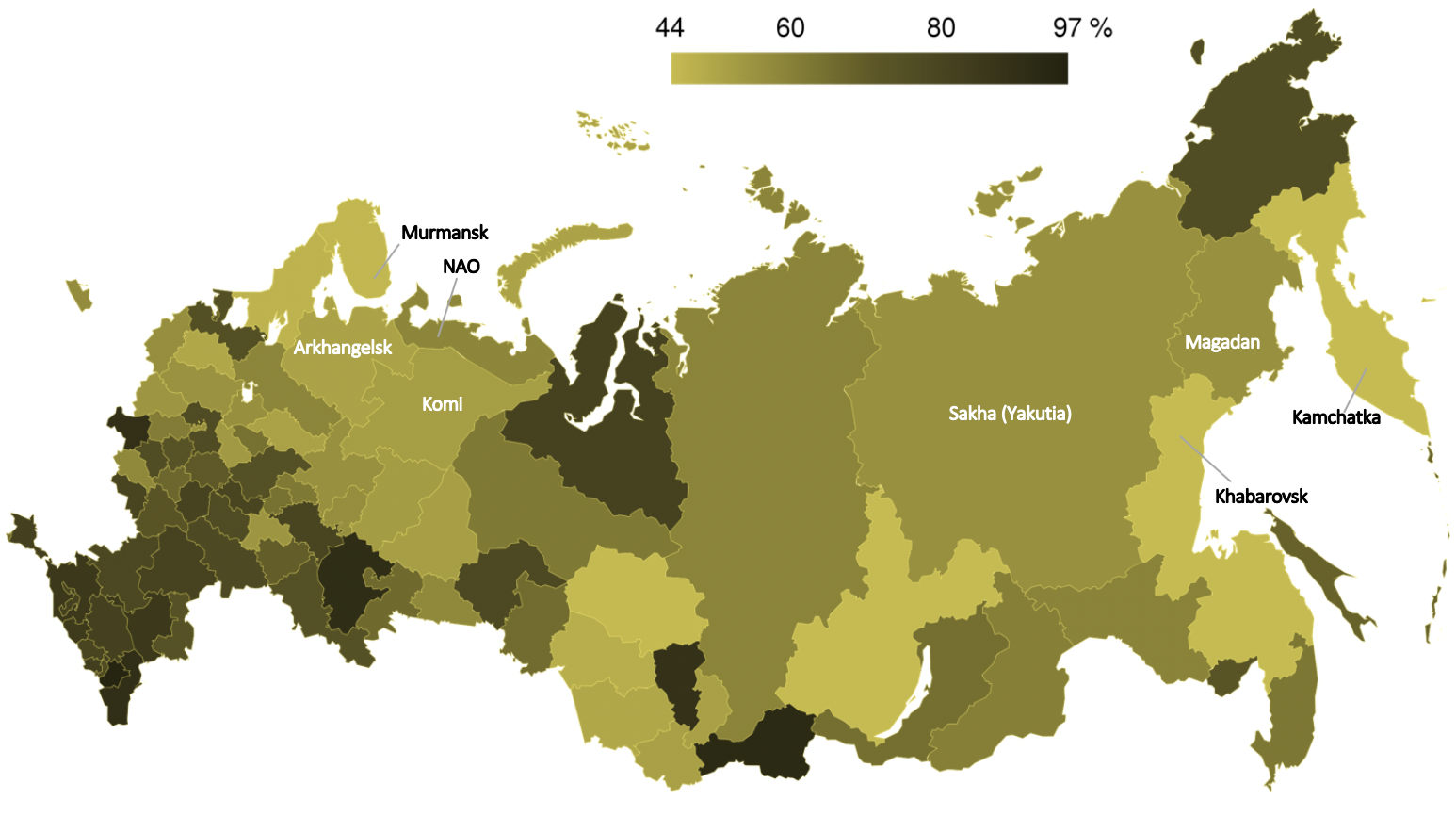 Keeping in mind the likely inflated levels of support, what emerges from the map are two protest belts: one in the Arctic, comprising Komi, Arkhangelsk, NAO, and Murmansk, and another in the Far East, comprising Yakutia, Khabarovsk Krai, Magadan Oblast, and Kamchatka Krai. These same regions showed lower-than-average support for Putin in the 2018 presidential elections: in the Komi Republic and NAO, support for Putin was 71 percent compared to a 77 percent national average, and in Yakutia and Khabarovsk Krai, support was 64 and 66 percent, respectively.

Opposition sentiment in Russia is typically concentrated in the liberal-leaning Moscow and St. Petersburg, but this has changed in recent years as economic stagnation and Putin’s torpid response to the coronavirus pandemic have driven his ratings to historic lows. The usually dormant Arctic and the Far East regions have increasingly become sites of an uptick in protests across Russia—from 1,600 in 2016 to over 2,200 in 2018 and over 2,000 in 2019, according to the Moscow-based Center for Social and Labor Rights. In late 2018, thousands took to the streets across Arkhangelsk Oblast to protest the construction of a massive landfill to be used for a ballooning Moscow’s waste. In May, hundreds of workers at Gazprom’s Chanyanda field in Yakutia staged a rally to protest working conditions after an outbreak of coronavirus at the complex. Isolated protests in the regions are not a major cause of concern for the Kremlin, but the emergence of concentrated zones of more recalcitrant federal republics, united by common environmental and socioeconomic grievances as well as overall lower levels of support for Moscow, poses a new and potentially explosive threat. There is strength in proximity, and the concerns of protesters in Arkhangelsk or workers in Yakutia are likely to resonate most strongly in the immediate neighborhood.

Several of the regions where support for the referendum was less enthusiastic, including Komi, Arkhangelsk Oblast, Magadan Oblast, and Kamchatka Krai, will have gubernatorial or regional parliamentary elections on September 13, which will serve as a preview for next year’s national parliamentary elections. In all likelihood, the well-resourced, Kremlin-backed United Russia candidates will win, but as with the recent referendum, levels of turnout and support may be more telling. United Russia’s approval ratings are down to just 33 percent from 48 percent in June 2018. If 2018 gubernatorial elections are any guide, United Russia may in the future face additional surprise electoral defeats. Down the road, this trend could give rise to a politically dangerous situation for the Kremlin: the emergence of clusters of neighboring regions with opposition governors, backed by their own electorates, who coordinate to form other poles of political power in Russia from Moscow.

The Kremlin seems to have read the wind. Last Thursday, security service officers arrested Sergei Furgal, the governor of Khabarovsk Krai, who in 2018 rode a wave of anti-elite sentiment to win an election against a Kremlin-endorsed candidate. While Furgal is a member of the nationalist Liberal Democratic Party of Russia, part of the “systemic opposition” that has links to the Kremlin and has long served as a political pressure valve, he was long viewed by Moscow as disloyal. His arrest was just one act in a flurry of repression following the nationwide vote and a signal to all regional governors that the Kremlin’s deferment of authority to regional authorities was a temporary arrangement. Low turnout for the referendum in Khabarovsk likely fueled Moscow’s anxiety that elite obedience in the region was slipping.

But the arrest backfired, igniting the largest protests in Khabarovsk in decades, with estimates in the range of 40,000 people on July 11 and continued demonstrations through the week. Festive chants of “Moscow, go away!" and "Putin, step down!” suggest that demonstrators were driven by anti-Kremlin sentiment in addition to support for their ousted governor. Moscow appears to be taking the demonstrations seriously and has sent an envoy to negotiate a replacement governor with local elites. But heavier involvement by the Kremlin may not fix the perception that Putin has interfered in the region’s democratic processes. Whereas past protests in the regions have centered on socioeconomic grievances—issues that are within Moscow’s power to fix either by budgetary means or by forcing the resignation of ineffectual governors—the object of these protests is now the Kremlin’s interference itself.

As Russia’s economy withers and coronavirus- and climate-related challenges mount in Russia’s Arctic and Far East territories, two regions crucial to Russia’s development, a four-year trajectory of more frequent protests in the regions is likely to continue. Against this backdrop, the Kremlin will have to tread a careful line: quelling the most overt expressions of regional independence in order to preserve the underlying myth of Putin’s legitimacy in Russia—a “power vertical” of centralized governance—without fueling a perception of central overreach, which could itself become the outer regions’ most common and unifying grievance.

Cyrus Newlin is an associate fellow with the Europe, Russia, and Eurasia Program at the Center for Strategic and International Studies in Washington, D.C.

Russia and Eurasia , and Russia