The Possible End of Cross-border Aid in Syria

Critical Questions by Jacob Kurtzer and Will Todman

UN humanitarian agencies’ mandate under UN Security Council Resolution (UNSCR) 2504 to conduct cross-border aid operations into northwest Syria expires on July 10, 2020. The cross-border mechanism allows UN agencies to deliver aid without the permission of the Assad government, which is critical because the regime consistently blocks aid from reaching opposition-held areas. UN agencies currently reach nearly 3 million civilians in northwest Syria from Turkey each month, many of whom have been displaced by fighting. In anticipation of the mandate’s expiration, the Security Council is debating if cross-border operations should continue, through which border crossings, and for how long.

The debate is highly politicized. In December 2019, Russia and China vetoed the renewal of the full cross border mandate for the first time since its adoption as UNSCR 2165 in 2014. A compromise resolution allowed UN agencies the use of two of the original four border crossings and reduced the term of the mandate from a year to six months.

Q1: How would the expiration of the cross-border mandate affect humanitarian operations in northwest Syria?

A1: Idlib province alone is home to nearly 3 million Syrians who rely on deliveries of food and other essential commodities brought across the border from Turkey, including nearly 1 million people displaced within Idlib province since January. With numerous reports of increasing malnutrition and food insecurity, the closure of the border crossings is raising legitimate concerns of severe food insecurity as the World Food Programme (WFP) warns of a possible famine in Syria. The cross-border aid mechanism sustains the humanitarian response in three critical areas: funding, procurement and logistics, and coordination and technical support.

After the passage of UNSCR 2165, the international community established the Syria Cross-border Humanitarian Fund (SCHF), a financial lifeline for civilians displaced by fighting. In 2019 alone, the SCHF allocated $117 million to nongovernmental organizations (NGOs) working in northwest Syria, 70 percent of which was distributed through local Syrian NGOs.

Failure to renew the cross-border mandate puts this funding mechanism at risk and threatens the solvency of many Syrian NGOs at the frontline of the response, creating a vacuum of service delivery and putting upwards of a million people at risk of acute food insecurity.

UN humanitarian agencies provide the logistical and procurement backbone for humanitarian operations. The WFP purchases and delivers the bulk of the food delivered by NGOs in northwest Syria. Between January and May 2020, an average of 1,350 truckloads of food and goods crossed into Syria; in May, nearly 1,800 truckloads of aid were delivered, the highest figures to date, highlighting the urgency to maintain the cross-border operation.

There is no local procurement substitute, and cross-line operations remain untenable due to insecurity and obstruction by the Assad government. Even if food were available, WFP’s logistical capacity is not replicable by local or international NGOs.

The UN provides technical support and coordination for the humanitarian response through the management of the cluster system, and through the work of individual agencies. Even if capacity existed, the lack of clarity on legal interpretations of the failure to renew the resolution inhibits NGOs from taking over the coordination. While it would be preferable for the UN to stay in Turkey and manage the cluster system, the operationality of cluster structure may not be viable absent a renewal of the cross-border mandate.

The UN presence also provides legal cover for many international NGOs operating in the northwest, an area with the known presence of groups designated under U.S. and UN anti-terrorism statutes. Coordination absent the UNSCR 2504 also raises complications for UN agencies and NGOs with operational footprints in both Damascus and the northwest with specific implications for management of the health response.

The humanitarian deconfliction process would also be challenged by a failure to renew UNSCR 2504. While the deconfliction process itself has been abused by Russian and Syrian attacks on health facilities and other civilian infrastructure, the process remains important for the documentation of violations of international humanitarian law, providing an evidentiary basis for accountability measures.

Despite the overwhelming need, Russia has insisted that cross-border operations are no longer necessary, and cross-line operations should instead be utilized to meet humanitarian needs in the northwest. Russia argues that the prevailing situation has changed, and thus cross-border operations are no longer necessary. While much of Syria has come under Assad’s control since the original resolution passed in 2014, the prevailing humanitarian situation in the northwest is consistent with the underlying rationale for the cross-border resolution in the first place. The northwest remains a highly contested and volatile region with massive humanitarian needs. 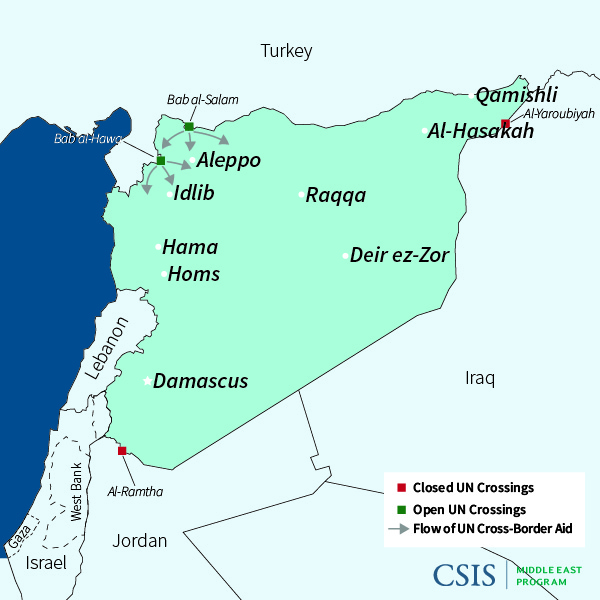 Q2: Why are Belgium and Germany proposing an extension of the duration of the mandate and the reauthorization of the Yaroubiyah crossing into northeast Syria?

A2: As penholders in the UN Security Council (UNSC), Germany and Belgium submitted a draft resolution extending the use of the two crossings in northwest Syria for a period of 12 months and for the reauthorization of the Yaroubiyah crossing for 6 months.

However, the impact of Yaroubiyah’s closure has been far greater than expected because of the Covid-19 pandemic. The crossing was primarily used by medical agencies to deliver health supplies to the area because many medical supplies are perishable, and transit times through Yaroubiyah were shorter. Between January and May cross-line operations from Damascus only reached 31 percent of medical facilities previously stocked by cross-border operations, leaving the area more vulnerable to the spread of the pandemic. Russia argues cross-line operations are an alternative but has not presented sufficient evidence that they can meet the scope of needs, and with the deteriorating health situation in the northeast, cross-line operations remain untenable to meet the magnitude of the health needs. The Assad government continues to obstruct deliveries of life-saving goods, denying humanitarian actors the freedom of movement necessary to deliver a needs-based response for civilians in the northeast. At a minimum, an extension of cross-border assistance is necessary to allow cross-line operations to be tested and independently monitored to demonstrate their operational viability.

A longer mandate for the two crossings from Turkey facilitates a coherent humanitarian response. If aid organizations believe the mandate for their operations could end in six months, planning will be short-term and less efficient. It could also prevent them from attempting to deliver certain items that have longer lead times and take months to arrive. Many of these items are medical supplies, meaning short-term planning is particularly detrimental to the medical infrastructure.

Q3: How does Syria’s economic crisis impact the debate over cross-border assistance?

A3: Syria’s exacerbating economic crisis is compounding humanitarian needs. The Syrian lira lost more value in the first six months of 2020 than it did in the preceding nine years of conflict. Prices of food, medicine, and fuel have reached unprecedented levels, and the UN estimates that 90 percent of people inside Syria now live in poverty. The WFP has warned of a potential famine.

The escalating crisis is primarily the consequence of rampant corruption, which characterizes Syria’s war economy and the regime’s economic mismanagement. External factors compound the crisis. The Syrian lira has plummeted in tandem with the lira in neighboring Lebanon, where banks are close to collapse. The Covid-19 pandemic also prompted a global economic downturn and caused authorities across Syria to shut down economic activity, which exacerbated the crisis.

Russia argues that U.S. and EU sanctions also contribute to Syria’s economic woes and has tried to connect sanctions to the cross-border debate. The United States announced the first tranche of sanctions under the wide-reaching Caesar Act in June, which are aimed to deter potential international investors from engaging with the Syrian regime as a means of changing the regime’s behavior. The Caesar Act includes exemptions to humanitarian activities, and the U.S. government has pledged to issue waivers to ensure humanitarian operations are not impacted. In reality, there is a danger of over compliance, the waiver process is inefficient, and the scope of humanitarian exemptions must be more clearly defined. Yet, it is disingenuous to argue that sanctions are the main cause of the economic crisis in Syria. The Syrian regime, not Western sanctions, is responsible for the economic downturn and the obstruction of humanitarian access inside Syria.

Q4: How are geopolitics affecting the renewal debate?

A4: While Russia’s position is increasingly clear, the upcoming vote is a test case for China and for new UNSC members like Tunisia and Vietnam.

China joined Russia in vetoing UNSCR 2165 in December, raising predictable concerns about sovereignty. In the interim, Covid-19 and the political crisis around the World Health Organization have led the Chinese government to posture as a responsible leader in combating the spread of the pandemic. This upcoming vote is a test case for Chinese ambitions to demonstrate global leadership in combating the spread of the virus. Voting with Russia and inhibiting the health response in the northeast and northwest would demonstrate that Chinese aspiration of global humanitarian leadership in response to Covid-19 ring hollow.

For Tunisia, Vietnam, and other newly elected members of the UNSC this vote offers a moment of clarity regarding their commitment to core humanitarian principles and previous UNSC resolutions. Smokescreens about sanctions and other issues unrelated to the northwest notwithstanding, the upcoming vote offers these states the opportunity to demonstrate a commitment to principles of international humanitarian law, which require the facilitation of humanitarian assistance.

Q5: What are the longer-term implications of this vote?

A5: Russia will likely attempt to block one of the northwest border crossings and offer another to remain open for just six months. Russia has stated that it intends to dismantle the cross-border mechanism completely by the end of 2020. When the cross-border mandate expires, the situation in northwest Syria will likely deteriorate as NGOs will be unable to compensate for UN agencies’ operations. The UN will be forced to centralize the majority of its operations in Damascus, but Western donors are unlikely to fund it to the same degree, knowing that the Syrian government routinely blocks UN agencies’ access to opposition-held areas. However, the centralization of UN operations in Damascus would also accelerate Russia’s push for the normalization of the Syrian government and undercut U.S. efforts to foster a lasting settlement to the Syrian conflict.

Jacob Kurtzer is interim director and senior fellow with the Humanitarian Agenda program at the Center for Strategic and International Studies (CSIS) in Washington DC. Will Todman is associate fellow with the Middle East Program at CSIS.