Given the ongoing political, economic, social, and humanitarian crisis in Venezuela, in early June CSIS convened a small group of experts to identify the major drivers of possible future scenarios for the crisis. The small group undertook a half-day exercise to identify the most important determinants of Venezuela’s future and to imagine four possible scenarios, or “alternate futures” based on those key drivers. [1]

The exercise concluded that the two major drivers that will influence the outcome of the crisis are the degree of internal stability that the regime can maintain and the degree and type of external pressure or assistance the regime receives from key international actors. The following are four potential scenarios for Venezuela’s future, listed in no particular order of likelihood. Each of these transitions would have major impacts on the “Day After” challenges facing the country.

Scenario Number 1: A Soft Landing—Opposition Ideology and Chavismo Live Together

The “Soft Landing” scenario is the product of successful, increased international and regional pressure, coupled with the consolidation of opposition forces into a cohesive unit. In this scenario, the regional and international community gets its act together and unifies around specific actions designed to pressure the regime and force a transition. These include individual U.S. sanctions, replicated regionally, and efforts to support the political opposition and key institutions like the National Assembly.

In this scenario, the constituent assembly is rejected when President Nicolás Maduro’s “inner circle” splits, along with noncorrupted elements of the security forces and private-sector elites, forcing a peaceful transition. The defection of this group of Chavistas, which represents the last of his popular support (currently hovering at about 11 percent), creates the conditions for a needed path toward the coexistence of the opposition and a significant portion of former Chavistas. While Chavismo will remain part of Venezuela’s cultural, economic, and political identity, many of the Chavistas in the country, having lost faith in Maduro’s government, will accept a managed transition that also offers them some protection.

The split within Maduro’s inner circle and the establishment of a stable and united political opposition leads to credible elections under a new National Electoral Council (CNE), monitored by the Organization of American States (OAS) and other observers and backed by a Supreme Tribunal of Justice (TSJ) with new members selected in accord with the current Constitution. The international community will be able to recognize a new (democratically elected) leadership and provide humanitarian, economic, financial, and judicial assistance to rebuild the country and its many crippled institutions. Freedom of the press, debt restructuring, humanitarian and health relief, anticorruption mechanisms, and institutional reforms are only a few examples of the potential benefits. In addition, some of the Venezuelan diaspora and their investments will return.

Though possible, this “best-case” scenario appears difficult to achieve in the short term. Fragmentation within the opposition, other than an existing consensus surrounding the need for Maduro’s departure, and Maduro’s sustained support within various government agencies, the National Guard, and armed militia, as well as from Cuba, Bolivarian Alliance for Peoples of Our America (ALBA), and cross-border narco-trafficking groups, are preventing any successful negotiation that could yield humanitarian relief and a stable political transition. International and regional actors remain unable to agree on elements of increased pressure.

Scenario 2: The Slow Unraveling of the Bolivarian Experiment

In this scenario, the internal situation continues to unravel slowly as international pressure on the regime fizzles. The central government continues to weaken, but the lack of coordinated, organized international pressure allows the regime to maintain control and prevents any peaceful negotiated transition of power in Venezuela. President Maduro can quell the April Rebellion—protests that started after the Supreme Tribunal took powers away from the National Assembly—using the Venezuelan National Guard and armed paramilitary groups (colectivos) to weaken the political stamina of opposition forces.

Additionally, Maduro moves forward with his plan to convoke an unelected “constituent” assembly, with the stated intent to write a new Constitution that threatens to establish a “communal state,” mimicking the political systems of North Korea and Cuba. This system rejects any referendum that would consider a constituent assembly unconstitutional and voids calls for democratic elections.

Continued disorganization and disunity of the opposition leads to further fragmentation, increased social unrest, violence, and crime, while the government’s failed economic policies continue, including hyperinflation, corruption, and expropriation of private property.

Externally, the provision of loans from China and Russia, coupled with increased international bond purchases (such as the most recent purchase by Goldman Sachs), prevent Venezuela from defaulting on its debt and allow Maduro to hold on. Maduro continues to meet bare-bones public-sector obligations, including paying security force wages, but he fails to provide much else.

International organizations and coalitions, such as the OAS, are unable to unify behind actions that could force a shift in Maduro’s resistance to a negotiated transition. The Caribbean Community (CARICOM), dependent on Petrocaribe, remains aligned with Maduro’s interests in international fora, blocking effective action by those organizations. Other countries in Latin America either remain passive toward Venezuela’s crisis, or continue to prop up the administration, with continued apparent intelligence and political support from Cuba and the corrupt income stemming from drug-trafficking networks from Colombia.

In this scenario, Maduro emerges successful and maintains control and social order. International pressure fizzles, and Maduro can quell unrest and create a stable, all-controlling dictatorship through the convocation of the Constituent Assembly. Venezuela becomes North Korea in the tropics, with oil. Maduro deepens relations, unchecked, with China, Russia, and Iran, and receives the support he needs to maintain total control.

The hand-picked Constituent Assembly bows to Maduro, and he rules with an iron fist. Social opposition dissolves, and the political opposition goes underground. 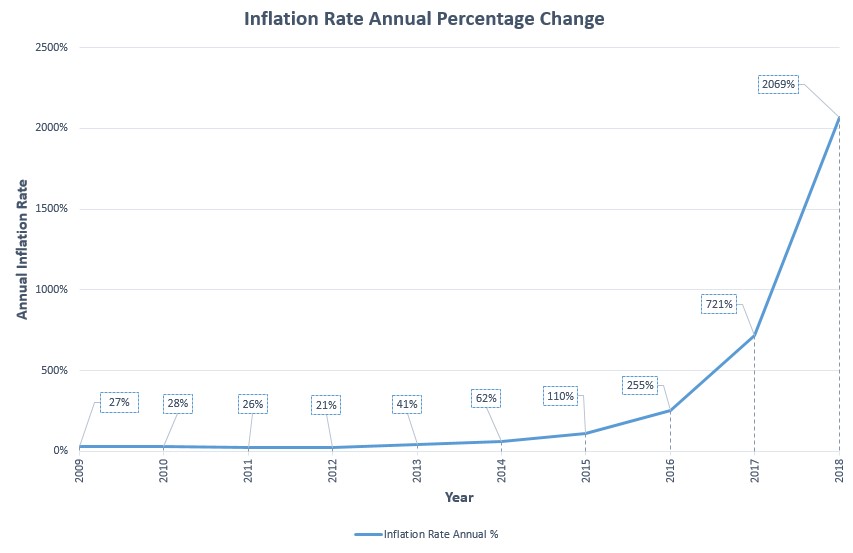 The current government has reportedly asked the military to join the newly proposed constituent assembly, but this has yet to happen. Various sources have reported that there is a heightened level of frustration and pushback against the administration within the military. This scenario highlights the possibility of the military shifting its loyalty away from the regime. Increased government repression and the unnecessary loss of innocent civilian lives that tarnish the military as an institution are the driving forces behind such a change.

If the military successfully executes a coup d’état, there are two possible outcomes: the military stays in power and takes control of the government and executive branch; or, the military transfers power in a controlled transition, allowing for institutional reform, national rebuilding, and democratic elections, with the caveat of some guarantees of institutional protection. In either case, but particularly if there is not a virtually immediate, timely, and internationally monitored electoral transition, the military regime would be condemned internationally as violating the Inter-American Democratic Charter and be subject to similar sanctions.

This is the “worst-case scenario” because the existing internal polarizing factors of instability lead to armed conflict, a complete national collapse, total chaos, and high loss of life. High pressure from the international community combines with Maduro’s erosion of power and desperate attempts to hold on.

Politically, the constituent assembly proposed by Maduro prevents any democratic elections and eliminates existing constitutional protections and institutions. There is a clearer institutionalization of corruption in both the private and public sectors, further fueling unemployment and civil unrest.

The economy continues to deteriorate, deepening the humanitarian crisis. Hyperinflation, expropriation of private companies, unproductive foreign loans, and further declines in gross domestic product produce even more widespread economic pain for all sectors of the country, including the military, urban barrios, and rural populations. Looting and security force takeover of potential resources. Socially, the humanitarian situation will deteriorate further as the shortage of medical supplies, food, and other necessities intensifies. Civil unrest will become more pronounced due to repression of the media, increased gang violence, and some armed actions by desperate members of the opposition. 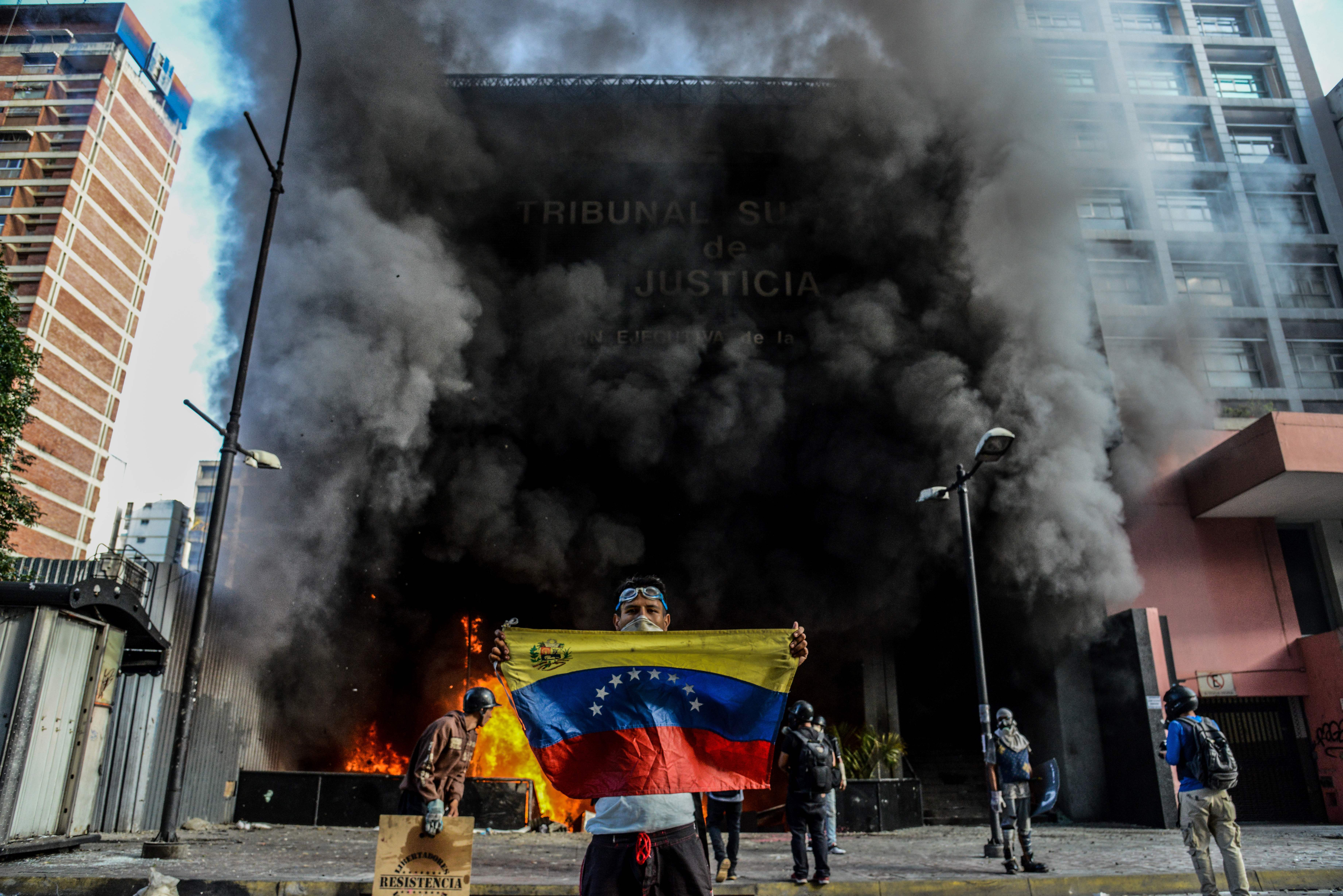 Anti-government demonstrators outside of the Supreme Court of Justice in Caracas - Photo credit: FEDERICO PARRA/AFP/Getty Images

Less likely, a wild-card scenario could occur with huge repercussions. International intervention becomes possible if, on top of increased narco-trafficking through Venezuela, other transnational criminal and extremist groups establish a presence in the country along with Russia, China, and Iran bases. Maduro’s desperate provocations to rally support and divert attention from domestic collapse could include border incursions in Colombia or Guyana, an attack on a U.S. ship, detention of Colombian or U.S. citizens, among others.

Citing the Rio Treaty, the United States, other regional countries, and multilateral organizations and institutions intervene militarily due to heightened national and international security concerns. The resulting occupation, even if—unlikely in the extreme—it is authorized by the OAS or UN Security Council, would be roundly condemned and would leave a broken and nonfunctioning state political and economic structure that will require a decade’s rebuilding.

Venezuela does not have to collapse or suffer national chaos in order to pivot. But to restore stability and some semblance of democratic institutional recovery, comprehensive reform is required.

While feasible and arguably inevitable, the transition and reform process must be driven internally, but an unwavering commitment from the international community also is required to restore Venezuela’s democratic institutions. The United States and international community must act much more cohesively to rekindle hope among Venezuelans and aid in the resurgence of economic prosperity in an often-forgotten nation—one that is becoming more dangerous, more chaotic, and more threatening to its neighbors, the hemisphere, and the wider international community.

Moises Rendon is associate fellow and associate director of the Americas Program at the Center for Strategic and International Studies (CSIS) in Washington, D.C. Mark L. Schneider is a senior adviser with the CSIS Americas Program.

This report is produced by the Center for Strategic and International Studies (CSIS), a private, tax-exempt institution focusing on international public policy issues. Its research is nonpartisan and nonproprietary. CSIS does not take specific policy positions. Accordingly, all views, positions, and conclusions expressed in this publication should be understood to be solely those of the author(s).
Photo credit: FEDERICO PARRA/AFP/Getty Images

[1] In order to apply additional analytic rigor to the development of plausible scenarios for Venezuela, CSIS convened a small group of experts with diverse backgrounds in the U.S. government and private sector, including Mark Schneider, senior adviser, CSIS Americas Program; Richard Miles, deputy director, CSIS Americas Program and director, CSIS U.S.-Mexico Futures Initiative; John Schaus, fellow, CSIS International Security Program; and Russ Dallen, managing partner, Caracas Capital Markets, to apply the Alternate Futures Structured Analytic Technique. Alternative Futures is a systematic method for identifying alternative trajectories by developing plausible and mind-stretching “stories” based on critical uncertainties. This scenarios method was inspired by Peter Schwartz, author of The Art of the Long View and Inevitable Surprises. The scenarios we developed in this exercise will help inform the “Day After” matrix that our Venezuela project is drafting to assist the United States and international community with recovery efforts in Venezuela.