Preventing Covid-19 from Becoming a Hunger Crisis in Africa

A version of this article was originally published in the Mail & Guardian on July 2, 2020.

In the last several months, Covid-19 has taken up nearly every news headline in nearly every country in the world. The health impact, testing, confinement, and trying to curb the pandemic have rightly been at the forefront. In the developed world, conversations have been about corporate losses and the availability of unemployment benefits. But low-income countries experience a different reality: in sub-Saharan Africa, over 70 percent of workers are self-employed, and a vast majority operate in the informal sector. Many bottom-of-the-pyramid Africans eat with the money they earn every day. Within this context, when a second massive swarm of locusts covered the sky like a Biblical plague in East Africa in April, devouring vegetation and presenting “an extremely alarming and unprecedented threat” to food security and livelihoods, as expected, this piece of news barely made a splash.

On the African continent, where McKinsey predicts that up to 150 million jobs could be affected through losses and salary reductions, a temporary locust invasion has far-reaching consequences. The first, in January, was the worst that some countries had seen in 70 years and affected vegetation and pasture that covered more area than the entire land mass of the United Kingdom. The current invasion is estimated to be at least 20 times worse.

In my home country of Ethiopia, a significant amount of cropland and pastureland is impacted by locusts, severely disrupting food supply. Already 1 million people have been pushed into hunger. In a region where 6 out of 10 people experience moderate to severe food insecurity, the consequences are devastating.

What’s worse is that the locust invasion is just one of many drivers of food insecurity on the African continent before Covid-19. The ongoing conflicts in the Sahel has pushed many households into extreme hunger, while widespread flood and drought continue to hinder both food production and consumption across the region. Even before Covid-19 hit, 135 million people were living under severe threat of hunger.

How Will Covid-19 Affect Food Security in Africa?

Enter the pandemic. Covid-19 has not only prevented an adequate response to the locust invasion, but has also exacerbated food insecurity across the continent. For many, starvation will be a deadlier threat than the virus itself.

Covid-19 has sometimes been referred to as the great equalizer, as the rich and poor alike have been infected. But the contrast between the developed and developing worlds cannot be more stark: as cookbooks are soaring in popularity in the West, the poor are protesting on the streets, such as we have seen in Senegal, in a desperate attempt to find any solution to stave off hunger.

While flour sales in the United States rose 154 percent in March and stores run out of yeast, those in Kenya’s largest slum recently set off a stampede to get to flour and oil handouts, leaving scores injured and two dead. For those living in extreme poverty—less than $1.90 a day—if they cannot eat, starvation is a reality. The impact of Covid-19 on food security shows that this crisis is anything but equal.

Undoubtedly, the biggest impact will be from the significant income losses: up to 80 million people are projected to fall into extreme poverty in Africa in 2020 as physical labor is restricted and remittances decline by 20 percent, the biggest amount in recent history. Falling remittances are no joke—they make up a substantial share of income: for instance, in Nigeria, the country with the largest population on the African continent, remittances are equivalent to the size of the federal government budget.

Ironically, even with a locust invasion, food is not in short supply globally; the challenge lies in getting it from the breadbaskets of the world to where it is most needed quickly and efficiently. This requires massive, global coordination of efforts hitherto unseen. Instead, many countries have become more insular: unnecessary hoarding is becoming increasingly popular, and eight countries have imposed binding export restrictions on food that can lead to global price spikes. This will affect a large proportion of African countries who are net food importers. In countries like Angola and Nigeria, this problem will be compounded: Angola imports over half of its overall food and has seen its currency decline against the U.S. dollar by nearly one-fifth due to falling oil prices. This makes the relative price of food even more expensive.

The supply of food that is produced locally has also been severely disrupted. In addition to locust invasions, social distancing and supply chain disruptions affect the ability of farmers to produce food and get it to market. World Bank estimates suggest that agricultural production in Africa could decline by 3-7 percent in 2020 if trade blockages are enacted, exacerbating the challenge of poor food access.

In countries like Nigeria and Ethiopia, the poor spend 60 percent of their consumption expenditure on food. It only takes basic arithmetic to calculate that the combination of income losses, impending price spikes, and supply chain disruptions will make food inaccessible for the poorest.

We don’t have to go that far back to learn from history. The Ebola outbreak that hit West Africa between 2014-2016 pushed 750,000 people into food insecurity in three countries alone. In 2014, nearly half of all Liberian farmers were unable to cultivate due to disruptions in the supply chain and labor market shortages, leading to price increases and leaving thousands hungry. In Sierra Leone, over two-thirds of households had to undertake coping strategies to ward off hunger.

We cannot let history repeat itself. If nothing changes, by the end of 2020, Covid-19 will double the number of people experiencing hunger so severe it is a threat to their life and livelihoods to over one-quarter of a billion people. That’s equivalent to more than 80 percent of the population of the United States, more than triple the number of visitors to France in 2018—the country with the most international visitors—and more than 100,000 people experiencing acute hunger for every one of the 2,604 billionaires in 2019. Let’s also remember that in Bob Marley’s own words, “a hungry mob is an angry mob.” No one should have to make tragic choices between protecting their health on the one hand and ensuring that they do not die of hunger on the other.

What Should Leaders Do to Prevent a Hunger Crisis?

Even if individuals do not have a choice, leaders do. Now is no different. Solidarity across borders is of the essence. More urgently than ever, ensuring continued food supply is needed through the establishment of a food corridor. Latin America recently formed a regional trade bloc for food supply to flow where it is most needed; African governments must do the same. Reducing or suspending tariffs on imports of staples and ensuring that farmers can access loan packages will be essential to ward off hunger. To protect the most vulnerable, governments must expand and improve food assistance and social protection programs.

Meanwhile, donor governments should resist protectionist measures in exporting and importing food but also provide assistance for pesticides to ward off the locust invasion. And all actors must enact an immediate debt moratorium—from multilateral, bilateral, and private sources—for 2020 and 2021 so that governments have the resources to expand social protection in their countries. They must do everything in their power to reduce the cost of sending remittances. And donors must fund the $6.7 billion requested for the Global Humanitarian Response Plan and the $1.5 billion for the Global Agriculture and Food Security Program, which will help reach the poorest and protect local food supply.

Thirty-five years ago, my home country, Ethiopia, was pushed to the brink of starvation. We experienced food insecurity so severe it resulted in 1 million deaths. Today, the warning signs are clearer than ever: if we do not act now, a lack of food access can kill millions more. I don’t want to wait for that outcome. I hope you don’t either.

Mimi Alemayehou is a senior associate (non-resident) with the Africa Program at the Center for Strategic and International Studies in Washington, D.C. She is the managing director and a member of the board of directors of Black Rhino Group, an investment platform focused on the development and acquisition of energy and infrastructure assets across Africa. 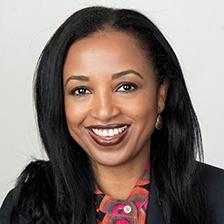 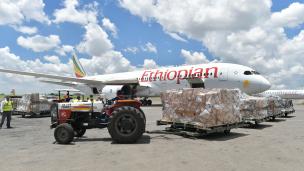 Ethiopia Battles the Pandemic and Its Economic Consequences
By Mimi Alemayehou
June 10, 2020
View all content by this expert