Putting Climate Migration Back on the COP27 Agenda

As policymakers meet to discuss the challenges of climate change at COP27—the 27th UN Climate Change Conference meeting from November 6–18 in Sharm El Sheik, Egypt—they are missing an opportunity to address climate-related migration and displacement. These issues are not on the agenda. Scientists foreshadow that greater environmental stress in some regions will force an estimated 216 million people to migrate internally by 2050 unless the world acts decisively to reduce carbon emissions.  As evidence grows on how and why people move in response to climate change, COP27 should build on its landmark decision back in 2010 to encourage governments at all levels to prepare for climate-related migration and mitigate forced displacement.

In 2022, Mercy Corps researchers spoke with households, community leaders, and representatives from government institutions in focus group discussions and structured individual interviews in two municipalities of Huehuetenango Department—an area with one of the highest rates of out-migration in Guatemala. Drawing on  information from those conversations and a review of evidence on climate change, migration, and disaster risk mitigation in Central America, three insights emerge that can help COP27 stakeholders to think in more forward-leaning ways about climate change and migration.

Central America has long been at risk of weather disasters—most notably, hurricanes and accompanying hazards like floods and landslides. These disasters are expected to increase in frequency and severity with climate change. For example, back-to-back Category 4 Hurricanes Eta and Iota in 2020 displaced some 1.5 million Nicaraguans, Hondurans, and Guatemalans. More recently, in October 2022, as reported by Aljazeera, the weaker Hurricane Julia swept across Central America, pushing some still struggling to recover from the earlier storms to think about leaving home for areas less vulnerable to recurrent climate disasters.

In addition to hurricanes, protracted drought in Central America’s dry corridor has devastated farmers and increased food insecurity. Today when Central Americans are asked about the reasons they decide to move, overwhelmingly they cite economic reasons. And yet climate change has emerged as a main reason their livelihoods are becoming more tenuous. In Guatemala, farmers told Mercy Corps researchers that relying on agriculture alone is no longer enough to make ends meet as changing patterns of rainfall are leading to less production. Increasingly, many are taking up additional livelihoods, such as construction, while others are migrating to Mexico or the United States.

Faced with the devastation of sudden weather disasters, the slow decline of agricultural productivity, or both, communities in Central America are pushed to find safety and sustenance elsewhere. To reverse this trend, high-income countries should honor climate adaptation finance commitments, ensuring resources are available for efforts such as strengthening systems for disaster risk reduction in the region to avoid displacement. In communities that have already been profoundly harmed by climate impacts and forced to leave, the Warsaw International Mechanism for Loss and Damage associated with Climate Change Impacts, through its Task Force on Displacement, needs to come up with specific measures to address the losses incurred through climate-induced displacement.

Migration may be a positive or negative adaptive strategy to climate change, depending on how, when, and under what conditions people move.

Whether displaced or deciding voluntarily to leave home, people across the world have and will continue to move in response to environmental factors. For some, migrating can represent an effective climate adaptation strategy, particularly if done proactively. For example, rural households in Central America and elsewhere often engage in a form of seasonal migration, strategically sending one or more members to the cities to provide additional income during dry seasons. This movement to urban areas is likely to increase and become more permanent due to the growing impacts of climate change on rural economies. Conversely, in cases where communities are forced to move only when faced with disaster, or when communities are trapped in areas that are dangerously exposed to climate hazards, they stand to lose more.

The International Organization for Migration reviewed the state of evidence on climate change and migration in Central America and found that the relationship between environmental drivers and migration is often complex. Natural hazards are more likely to drive distress migration among populations experiencing insecure land ownership or poverty, and those that are heavily reliant on agriculture. It is rarely just the environmental hazard that leads people to move—economic and social factors, age, and gender as well as networks and family ties are almost always factors in decisions about migration.

While the World Bank estimates that by 2050 there will be an estimated 17 million internal climate migrants in Latin America, national, regional, and global climate and development policies have not yet adapted to respond to this reality. The inclusion of migration in climate policies is scarce although both Honduras and Guatemala mention climate migration in their national climate change plans. Moreover, some climate change policies may increase displacement, as is the case with biofuel production or the construction of dams to produce hydropower to replace fossil fuels. The lack of a supportive policy framework to help people to cope or adapt with climate-related shocks does not mean that people will not move—but rather they will move in a more clandestine, risky, and maladaptive way.

Remittances are a large untapped source of finance for anticipatory action to mitigate disaster-related crises.

Whenever disaster strikes—whether a hurricane or an earthquake—migrants send money back home to their families. Right now, remittances globally are around three times the volume of foreign aid and money sent back after disasters helps communities rebuild. However, research from the Centre for the Study of African Economies indicates that having access to cash ahead of rather than after a disaster can improve household well-being, reduce asset loss, and decrease the need to borrow money.

In the past few years, there have been efforts—particularly by the International Federation of Red Cross Red Crescent Societies (IFRC)—to use forecast-based financing as a disaster risk reduction measure.  Through a dedicated fund and a set of agreed trigger points, IFRC transfers additional funds in anticipation of a disaster to a national society, which has already developed an action plan on how it will use the additional funds to prepare for a disaster. Similarly, the World Food Program is using forecast-based financing in 19 countries by providing anticipatory cash transfers to individuals in advance of a disaster and other humanitarian organizations are beginning to follow suit.

Anticipatory action to forecasted disasters, such as hurricanes, could be more impactful if remittances are linked to weather early warning systems. However, leveraging remittances through disaster forecasting has, to date, not been fully explored, much less put into practice. This presents an opportunity for innovation and collaboration across private sector remittance providers, and meteorological and disaster risk reduction institutions. More broadly, supporting the flow of remittances to bolster climate action in climate-vulnerable, low- and middle-income countries is an opportunity that COP27 stakeholders should advance, while acknowledging that remittances should not be seen as a substitute for the climate finance obligations of developed countries.

Climate change and the toll of disasters will increase pressures for people to leave their communities in Central America and other regions. This is both an immediate and a long-term challenge for governments and the international community. Despite the concerning trends, there are opportunities to avert the most negative impacts of climate change on vulnerable populations. Recognizing that climate change is shaping patterns of mobility, and will continue to do so, COP27 should acknowledge the role migration plays in adaptation and account for displacement when it comes to loss and damage mechanisms.

Beza Tesfaye is a senior associate (non-resident) with the Project on Fragility and Mobility at the Center for Strategic and International Studies in Washington, D.C., and director for research and learning for climate change and migration at Mercy Corps. Elizabeth Ferris is Director of the Institute for the Study of International Migration in the School of Foreign Service at Georgetown University and a nonresident senior fellow in Foreign Policy at the Brookings Institution.

This commentary was made possible by a grant from Carnegie Corporation of New York. The statements made and views expressed are solely the responsibility of the authors. 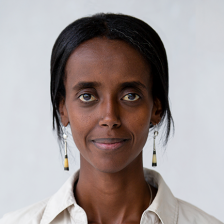 Most Recent From Beza Tesfaye 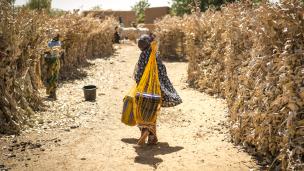 Addressing Climate Security in Fragile Contexts
By Beza Tesfaye
February 1, 2022
View all content by this expert