On August 30, the Politburo of the Communist Party of China (CCP) announced that the long-awaited Fourth Plenum of the Nineteenth Central Committee will convene in October 2019, during which the body will review several regulations relating to intra-CCP regulations. This announcement comes after months of speculation that the plenum’s delay—the longest in the post-Mao era—stemmed from internal power struggles between General Secretary Xi Jinping and other political elite. However, when looked at in the broader context, the plenum’s seemingly peculiar timing stems from an adjustment to the plenary schedule made in early 2018. In short, Xi may well be facing opposition within the Party leadership, but the delayed plenary session is likely not evidence of such unrest.

A1: Simply put, a plenum (“plenary session”) is the convening of the CCP’s Central Committee, during which time the committee’s Political Bureau (Politburo) proposes policies for review or approval. In theory, the Central Committee is the CCP’s top executive body when a Party Congress is not in session. Every five years, the clock on the plenum schedule resets with the election of a new Party Congress, with the current being the Nineteenth Party Congress, which began in October 2017 and will run through the fall of 2022. There are typically seven plenary sessions in each five-year term of a Central Committee, but additional plenums have been convened to address pressing or politically sensitive issues.

While the agenda for plenary sessions can often appear drab, plenums have in fact been the backdrop for some of modern China’s most important political or historical shifts. The Third Plenum of the Eleventh Party Congress in 1978 is often seen as the beginning of China’s economic reforms, while the Fourth Plenum of the Thirteenth Party Congress in 1989 was the occasion for the purging of CCP leader Zhao Ziyang owing to his opposition to the crackdown on Tiananmen Square protestors. While there are no firm guidelines, a convention has emerged wherein specific plenums have general themes. For example, the Third Plenum often focuses on economic reforms, a legacy of the 1978 meeting mentioned above, while the Fourth Plenum often deals with issues of CCP internal governance. That being said, topics are flexible and reflective of issues the Party leadership views as most pressing. 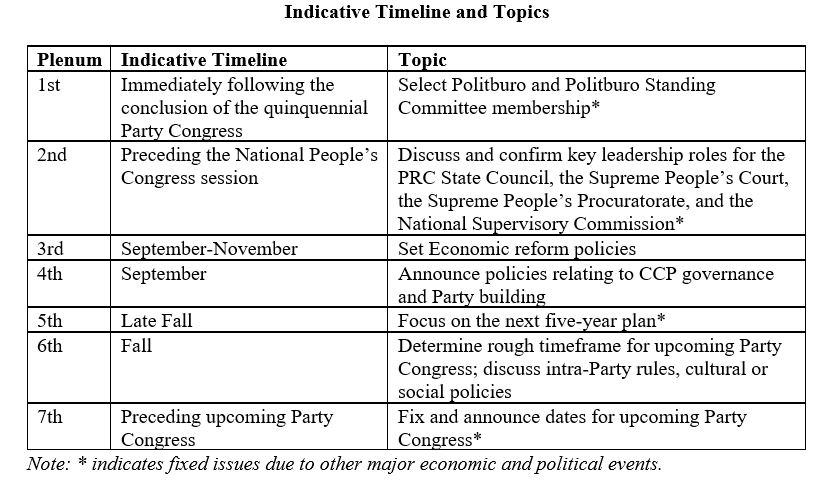 A2: As mandated in Article 22 of the CCP’s Constitution, the Politburo must convene a plenary session at least once per year, but there are no rules governing the specific dates and meeting themes. After an analysis of all plenums dating back to 1977, we find that most plenums occur 300-400 days after the preceding one. That roughly falls within the timeline of one meeting per year. (See chart below for more detail.) 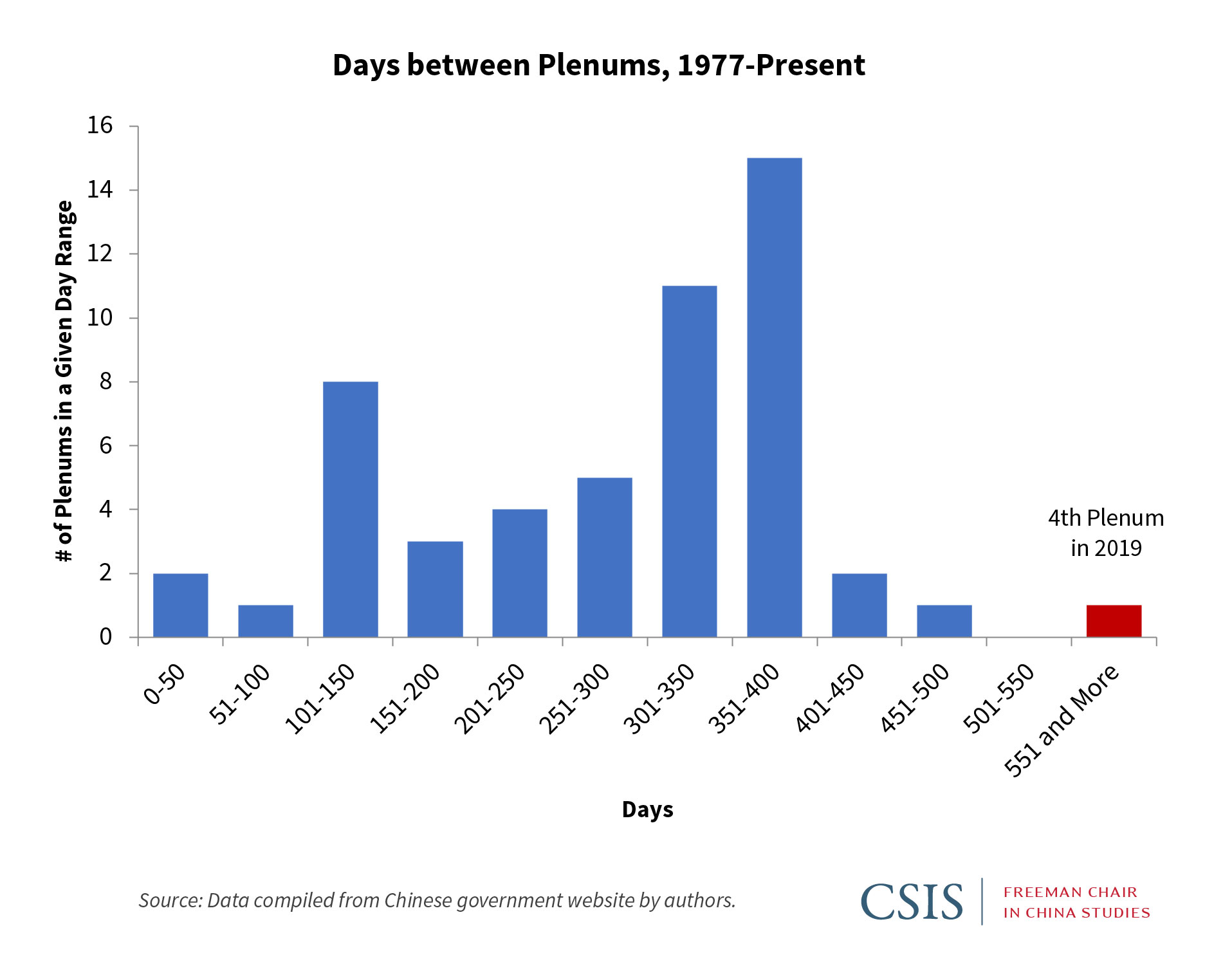 Q3: Did an internal power struggle cause the delay in the Fourth Plenum?

A3: When the Fourth Plenum is finally held in October (the specific dates have not been announced), it will be at least 580 days since the Third Plenum concluded on February 28 of last year, representing the single longest delay between meetings in the post-Mao era. Seeing as this lag comes amidst widespread rumor of political infighting within the CCP leadership, some have argued that the delay is a sign that Xi Jinping is facing significant political opposition. Given the opacity of China’s political system and the culture of fear that now grips Beijing, we cannot rule out this line of thinking.

Yet a simpler explanation holds that the delay in the Fourth Plenum actually stems from events in early 2018, specifically the unexpected announcement of the back-to-back Second and Third Plenums, held in January and February, respectively. Without traveling too far down the rabbit hole of Party-state meeting schedules and agendas, the surprise Second Plenum focused on the sweeping revisions to the People’s Republic of China’s Constitution abolishing term limits for the office of the presidency and including “Xi Jinping Thought” as a guiding principle for the country. The need to call a plenum was not surprising given the significant implications for the CCP and the nation as a whole. In addition, the proposed constitutional amendment also needed to be approved by the National People’s Congress (NPC), which convenes in early March. Yet by doing so, this meant that a Third Plenum—which usually is convened in the fall with a focus on economic reform policies—needed to be pulled forward to discuss the issues relevant to the upcoming NPC, such as positions in the State Council and ministries. Simply put, if it were not for the abolishment of term limits, the Second Plenum would have been held one month later and focused on the NPC with the Third Plenum likely being held later that fall. Thus, the story of the delay in the upcoming Fourth Plenum is really the story of the Second Plenum in early 2018 and Xi Jinping’s plans to further consolidate power by abolishing term limits.

Q4: What does the recent announcement tell us about the upcoming Fourth Plenum?

A4: One important point stands out from the announcement from China’s Xinhua News Agency and the four minutes dedicated to the meeting on the flagship nightly TV news program, Xinwen Lianbo. First, the documents to be reviewed by the Central Committee in October all relate internal CCP governance rather than focusing on economic reform. Given that last year’s Third Plenum was used to discuss governance reforms in the lead-up to the NPC, the Fourth Plenum might well be used to focus on the economy, as discussed above. Clearly, Xi Jinping views political concerns and Party governance as taking precedence over adhering to convention. This comes through in the longer statement made on the Xinhua website, which reads: “The meeting will be held during a time of significant upheaval not seen for 100 years, and a critical period for China as it realizes the great rejuvenation of the Chinese nation.” This undoubtedly relates to events in Hong Kong, the deterioration of relations with the United States, and the upcoming Taiwan presidential election, to name just a few. Xi Jinping and his administration are facing challenging times, perhaps the most precarious period of his rule thus far.

Second, it has been widely expected that the CCP will announce major economic reform measures after the conclusion of a third plenum. In addition to the famous Third Plenum in 1978, CCP announced the establishment of “socialist market economy with Chinese characteristics” after the Third Plenum of the Fourteenth Party Congress in 1992. During Xi Jinping’s first term as CCP’s general secretary, the Third Plenum in 2013 pledged to allow the market to play a “decisive” role in allocating resources in the economy. Since the Nineteenth Party Congress in 2017, CCP has announced economic reform measures on several occasions, including the Bo’ao Forum in April 2018 and the fortieth anniversary of “reform and opening” in January 2019. Under the current trade war with the United States, China is unlikely to make significant policy shifts unilaterally without guaranteed reciprocity from the United States.

Jude Blanchette is the Freeman Chair in China Studies at the Center for Strategic and International Studies (CSIS) in Washington, D.C. Mingda Qiu is a research associate with the CSIS Freeman Chair.