The Critical Failures In Planning, Programming, Budgeting And Resourcing The Afghan And Iraq Wars

The United States is now losing the war in Afghanistan, and is failing to consolidate its victory in Iraq. Reversing this situation requires changes in strategy, but it also requires significant additional resources. It may be tempting for the Obama Administration and the Congress to deny this reality, but any failure to provide the additional funds and forces needed to win, and to correct seven years of under-resourcing the Afghan conflict, may well lead to eventual defeat.

The challenges involved are described in detail in an updated analysis by Erin K. Fitzgerald and Anthony H. Cordesman for the Burke Chair at CSIS. This paper is entitled Resourcing for Defeat: The Critical Failures In Planning, Programming, Budgeting and Resourcing the Afghan and Iraq Wars, which is available from the Burke Chair section of the CSIS web site at https://www.csis.org/analysis/resourcing-defeat-0.

It documents a major grand strategic failure on the part of the United States during 2001-2008. Effective war fighting requires effective planning, and this is especially true of resources.  The United States, however, failed to develop meaningful long-term strategies and plans for the Iraq and Afghan Wars, and failed to translate them into budgets and well-defined requests for resources.  It dealt with both wars by budgeting for each year in an annual increment and without tying its resource requests to a coherent campaign plan for warfighting or armed national building. It never developed a consistent or credible long-term funding profile for war fighting, nor did it properly manage either conflict.

The Bush Administration failed to develop a meaningful long-term strategy or plan for the Iraq and Afghan Wars, while also failing to properly resource its wars and produce sound budgets. For the past eight budgets, the Department of Defense requested emergency supplemental or “bridge” funding outside of the regular defense budget. This dual-track budget process created numerous problems in terms of ensuring the effective planning and resourcing of the wars, and ensuring suitable Congressional and media review. Moreover, DOD consistently sought funding for programs that do not meet the reasonable test for a war-related emergency. In essence, the Department treated the supplemental and baseline budgets as fungible, compromising the integrity of the normal budgeting process.

The Burke Chair has prepared an overview of the current estimates of the cost of the war to date, and of possible future costs. While it surveys budget requests made by the Department of Defense (DOD), it relies heavily on work by the Congressional Budget Office (CBO), Congressional Research Service (CRS), and General Accountability Office (GAO).

These estimates show that warfighting and other defense expenditures are putting more pressure on the budget and economy – although scarcely at anything approaching Cold War levels. The CBO estimated in August 2009 that,

“Nondefense discretionary outlays are expected to climb to $584 billion this year—an increase of 12 percent…At that level, nondefense discretionary spending will represent about 4.1percent of GDP, the highest share since 1983. Defense outlays are anticipated to increase by 7 percent in 2009—slightly below the rate of growth that such outlays have experienced, on average, over the past 10 years. Defense outlays are expected to total $657 billion this year, or 4.6percent of GDP, the highest share since 1992.”

Although there are problems in the available data and many different ways to estimate costs, the analysis shows that war costs of at least $915 billion have been covered by supplemental emergency appropriations, with $687 billion going to the Iraq War and $228 billion going to Afghanistan.

Figure I: Annual DOD Spending on the Iraq and Afghan Wars (in billions) 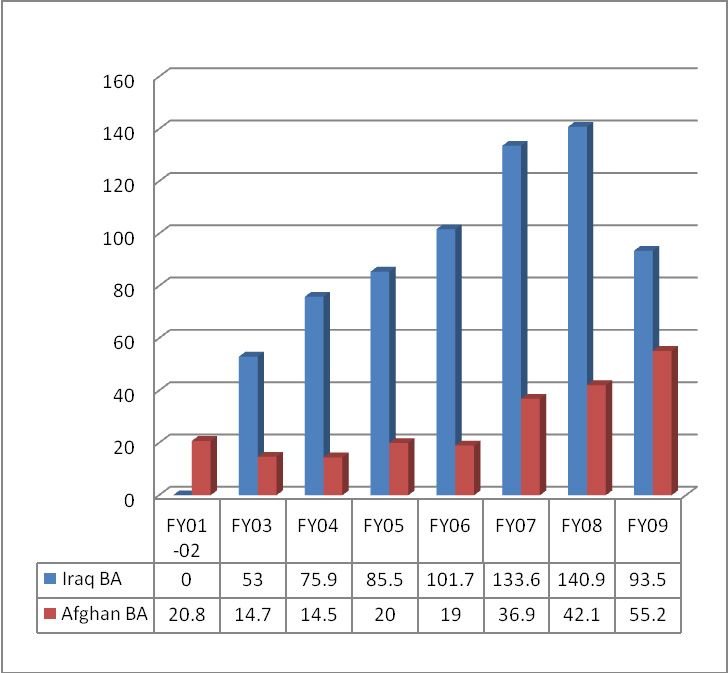 The difference between these two figures reveals a fundamental difference in the way in which the Bush Administration reacted to the challenges it faced after the initial moment of conventional victory. As Figure I shows, in the Iraq War, the United States threw enough money at the conflict to largely defeat the insurgency, although the ultimate outcome is still unclear. It did so, however, without developing coherent budgets and long term funding profiles, and without any clear effort to develop the kind of consistent and well-managed programs that could have reduced the cost of the war and improved the effectiveness of US forces – hence the continued reliance on supplementals displayed in Figure II.

In the case of the Afghan War, the United States underfunded the conflict to the point where it risked defeat. In spite of significant allied contributions, the Afghan War has received less outside funding than the Iraq War. Costs for Operation Enduring Freedom have risen dramatically since FY2006 as troop levels and the intensity of conflict have grown, but expenditures have been three times higher on Iraq to date.

The Bush Administration simply did not fund the war it had to fight. As Figure III illustrates, it was only in FY2009, some seven years after the war in Afghanistan became a major US strategic commitment, when the US began to fund the war seriously. At a minimum, American underresourcing allowed the Taliban to recover and seize the initiative, and al-Qaida to create a new sanctuary in Pakistan. The end result is that the cost of salvaging victory – if this is still possible – will be an order of magnitude higher than it should have been – both in dollars and body bags.

Figure II: Baseline Budget vs. Supplementals for Iraq, FY03-FY09 (in $US billions) 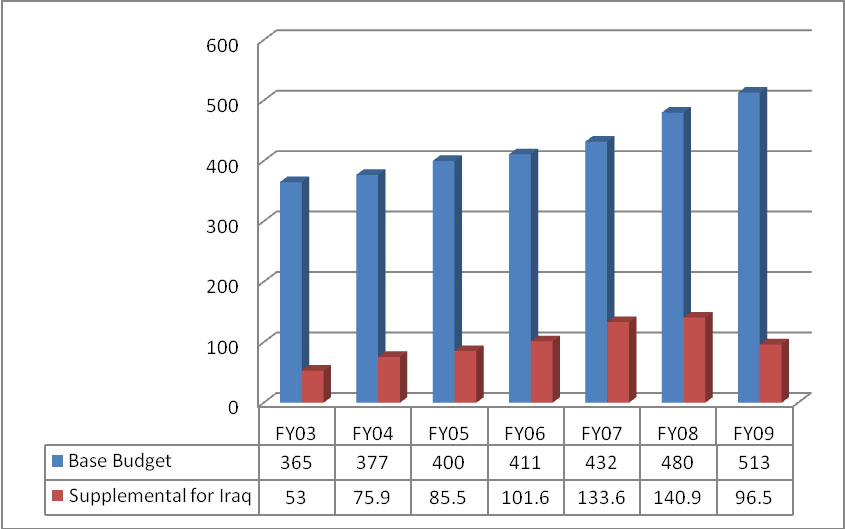 Figure III: Baseline Budget vs. Supplementals for Afghanistan, FY03-FY09 (in $US billions) 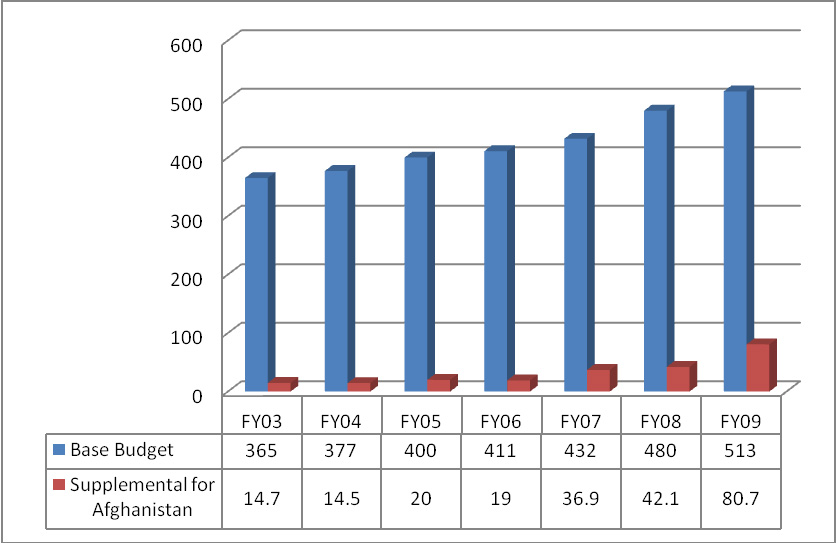 It should be noted, however, that these estimates date back to May 2009, and CBO reporting in August 2009 reflect a higher figure – and also show that the Afghan War and the rest of the war on terrorism got roughly one-third of the funding of the war in Iraq even though they were fought over a substantially longer period of time:

“Since September 2001, lawmakers have provided a total of $944 billion in budget authority for military and diplomatic operations in Iraq, Afghanistan, and other regions, for some veterans’ benefits and services, and for related activities of the Department of Justice (see the table to the right). Appropriations specifically designated for those activities, which averaged about $93 billion a year from 2003 through 2005, rose to $120 billion in 2006 and to $187 billion in 2008, before declining to $154 billion in 2009.

Funding to date for military operations and other defense activities related to the war totals $849 billion, most of which has gone to the Department of Defense (DoD). Lawmakers also provided more than $42 billion to train and equip indigenous security forces in Iraq and Afghanistan.1 A total of $891 billion has thus been appropriated since September 2001 for military operations in Iraq and Afghanistan and other war-related activities.

In addition, $51 billion has been provided for diplomatic operations and foreign aid to Iraq, Afghanistan, and other countries that are assisting the United States in fighting terrorism. Of that amount, $16 billion was appropriated for the Iraq Relief and Reconstruction Fund.

DoD reports that in 2009, obligations for operations in Iraq and Afghanistan and related activities averaged almost $10 billion per month through May, the last month for which data are available. That rate is about $3 billion less than the average monthly obligations in 2008. Because more than half of the funding for 2009 was provided at the end of June, however, the Congressional Budget Office (CBO) expects that monthly obligations will increase significantly during the last quarter of this fiscal year.

Operation Iraqi Freedom accounts for approximately 74 percent of all reported obligations—down from 80 percent in 2008 and 85 percent in 2007…Operation Enduring Freedom (which refers mainly to operations in and around Afghanistan) accounts for another 26 percent. Additional security missions based in the United States—such as combat air patrols over Washington, D.C., and New York City (known as Operation Noble Eagle)—account for less than 1 percent.

Because most appropriations for operations in Iraq and Afghanistan and for related activities appear in the same budget accounts that record appropriations for DoD’s other functions, determining how much has actually been spent for those activities is difficult.  CBO estimates that appropriations for those operations resulted in outlays through 2008 of about $575 billion (of which about $140 billion occurred in 2008). Of the funds appropriated for international affairs related to the wars, about $35billion was spent through 2008, CBO estimates. In total, outlays for operations in Iraq and Afghanistan amounted to roughly $145 billion last year. Outlays in 2009 (which also include spending from prior years’ appropriations) could total approximately $160 billion, in CBO’s estimation.”

These years of underfunding the Afghan conflict have created a dilemma for the Obama Administration where it must now pay far more to compensate for a past Administration’s grand strategic failures or risk losing the war in Afghanistan. Moreover, neither DOD nor the State Department budgets now fund an adequate or well-defined plan for the civil side of either war, and it is unclear that the Department of Defense plans to sustain the US military advisory effort in Iraq at anything like the level required. The US finds it easy to announce “strategies” and concepts; it has yet to show that it can back them with efficient and effective plans, programs, and budgets.

The end result is that President Obama must now deal with two badly managed and budgeted wars. In the case of Iraq, he must deal with the withdrawal of US combat forces from a war with no clear plan or funding for making the transition to a civilian-dominated nation building effort or supporting the development of Iraqi security forces. It the case of Afghanistan, he must either make unpopular and costly decisions to compensate for seven crippling years of underresourcing the war, or risk losing it.

Downloads
Resourcing For Defeat
Written By

Writing Off Afghanistan: Does Biden Have a Choice?
By Anthony H. Cordesman
January 19, 2021
Commentary

The Biden Transition and U.S. Competition with China and Russia: The Crisis-Driven Need to Change U.S. Strategy
By Anthony H. Cordesman
January 6, 2021
Commentary