The Return of ISIS in Iraq, Syria, and the Middle East

By Anthony H. Cordesman, and Abdullah Toukan, with the assistance of Max Molot

The U.S., its European allies, and its Strategic Partners in the Middle East achieved a significant victory in breaking up the ISIS protostate – or “caliphate” – in Syria and Iraq. This break up has sharply reduced the fighting against ISIS in Iraq, and in Eastern Syria.

The U.S.-led Coalition did not, however, fully defeat ISIS in either Iraq or Syria or eliminate ISIS and other forms of extremism as serious threats. It did not bring lasting stability to Iraq or end the Syrian civil war, and it did not eliminate the threat from ISIS and other extremist groups in the rest of the MENA area.

This analysis covers two important aspects of the crisis in Iraq and Syria since the break of the “caliphate.” First, it summarizes key official reporting on the resurgence of ISIS as a serious threat in both Syria and Iraq. Second, it puts ISIS in perspective – showing that it did not dominate the violence and levels of terrorism in Syria even at its peak, and noting that ISIS is only one of the major threats to stability in Iraq.

The Resurgence of ISIS

Recent Department of Defense and UN reporting has shown that ISIS has reorganized and recovered to a significant degree in both Iraq and Syria since the final battles against its “caliphate” as well as continued its operations in other countries. Other reporting by Rand indicates that ISIS faces serious financial constraints but is still able to fund significant operations.

Data compiled by the Armed Conflict Location & Event Data Project (ACLED), an NGO that collects, analyzes, and maps conflicts around the world, shows that the defeat of ISIS in these battles did sharply reduce the level of violence ISIS has caused in Iraq and Syria since the breakup of the “caliphate.”

The graphs in Figure One show the trends in two sub-categories that ACLED classifies as “violence against civilians” — attacks and fatalities. In both cases, ISIS is not attacking nor killing at the rate it did before the defeat of its “Caliphate.”

These data do not mean, however, that ISIS has been defeated in Iraq and Syria, or that its influence has not expanded outside both states. It is also important to note that while ACLED tries to be conservative in its estimates of fatalities, it advises caution in using all fatality numbers as they are often the most biased and least accurate elements of conflict reports.

More broadly, the decline in the level of ISIS-caused violence does not mean that the U.S.-led counter-terrorism coalition has reduced the overall threat of extremism, or brought unity and stability to Iraq, Syria, or any of the other states affected by ISIS and other extremist movements.

Defeating the ISIS “Caliphate” has treated a key symptom of terrorism and extremism but has not addressed most of its major causes. Reporting by the World Bank, IMF, CIA, and UN indicate that the political, governance, economic, and broader security problems that breed and sustain extremism have grown worse in Iraq, Syria, and other states since the U.S. invasion of Iraq in 2003 and the Arab upheavals began in 2011.

Media reporting makes ISIS’s resurgence all too clear on a day-to-day basis. More importantly, two key official sources provide additional data that highlight the continuing risks that ISIS poses. Both sources have exceptional access to the official and intelligence data on this reemerging threat and provide a clear picture of the ways in which ISIS is reorganizing its terrorist activities that take advantage of declassified intelligence and access to official sources.

Another source, which relies primarily on open-source information, has gathered extensive data which argues that ISIS still possesses the means to gather its resources and reestablish itself as a consolidated actor. This source is a RAND Report, entitled “Return and Expand? The Finances and Prospects of the Islamic State After the Caliphate”, issued August 8, 2019. ( https://www.rand.org/pubs/research_reports/RR3046.html)

All three sources deserve special attention and reinforce media and outside expert warnings of the seriousness of the continuing threat. The excerpts from each report that follow, and that focus on the threat in Syria and Iraq, clearly show that ISIS is remerging as both a direct threat under its own name and as part of a broader extremism effort. It should be noted, however, that the UN report also covers the global efforts of ISIS/ISIL, and the measures that UN countries are taking to counter these threats.

In addition, work by Dr. Abdullah Toukan has developed more detailed assessments of the patterns in violence revealed in ACLED database using a new computer model he has developed called the SIRA Model. These assessments show the levels of attack and fatalities in Syria and Iraq, and map their location, during the peak periods of fighting that broke up the “Caliphate.” They then show the levels of attacks and casualties in the first half of 2019, and the extent to which ISIS has recovered its capability to pose a threat in both countries.

These data also show that any effort to bring security and stability to Syria, Iraq, and the region must look far beyond a single movement like ISIS. Syria is a classic case example Not only did many other non-state actors shape the patterns of violence in the Syrian civil war, the ACLED data show that the primary source of terrorism was state terrorism by the Assad regime, not terrorism by ISIS.

It is also important to note that a wide range of reporting by the UN’s Regional Bureau for Arab States, the World Bank and IMF — and other sources — show that the material causes of extremism have gotten substantially worse in Syria, Iraq, and many other MENA countries since 2001— and particularly since 2011. Governance, corruption, weak economic development, critical employment problems, and major economic, ethnic, and sectarian inequities all remain key forces that can create and sustain extremist movements and internal conflict. So far, the situations in Afghanistan, Libya, Syria, Yemen, Somalia, and other similar cases, all continue to deteriorate.

The Burke Chair at CSIS has prepared a summary of the key excerpts from the LIG and UN reports, and of the ACLED data with the help of Dr. Toukan. It is entitled The Return of ISIS in Iraq, Syria, and the Middle East, and is available on the CSIS web site at https://csis-website-prod.s3.amazonaws.com/s3fs-public/publication/190903_Comparisons_Between_LIG_UN_.pdf. 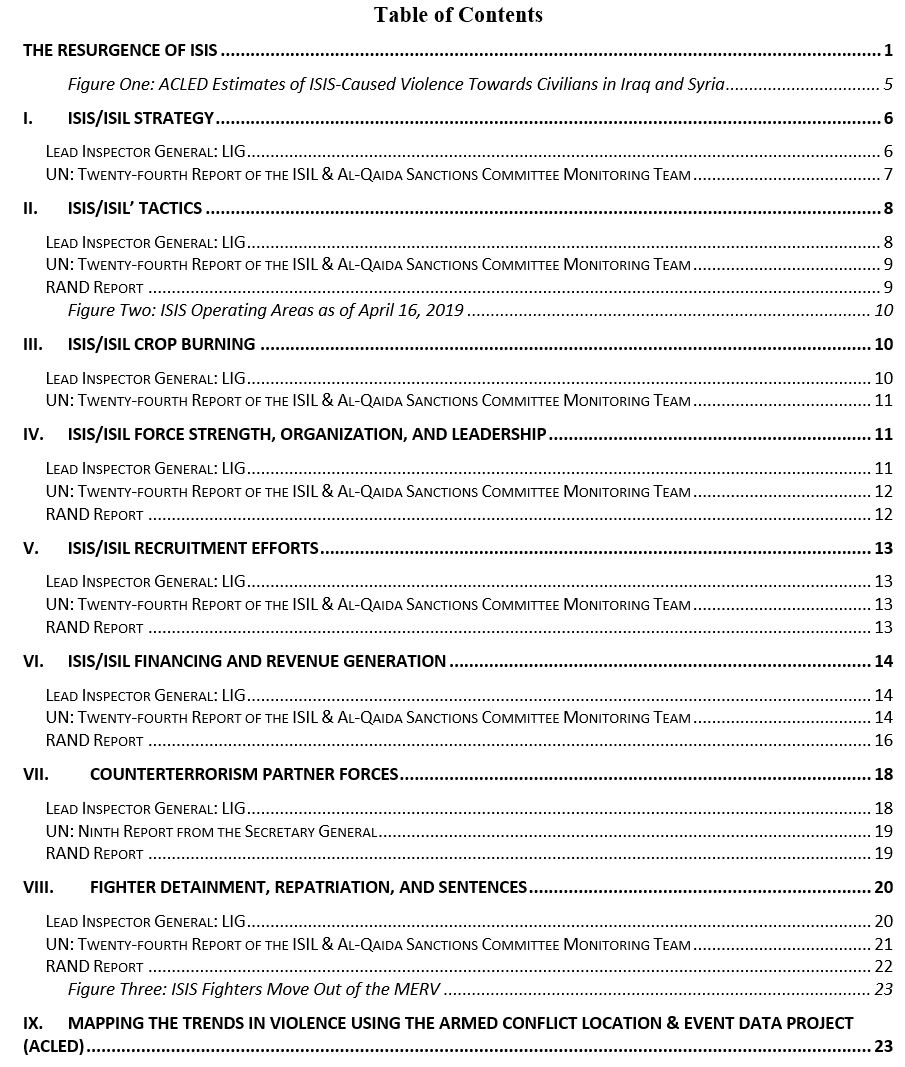 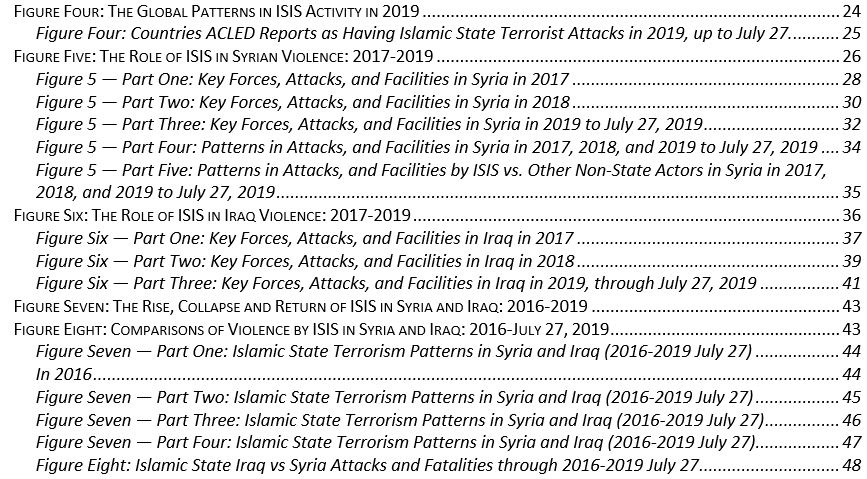