Reviewing the Turkish Economy in 2017 and Looking Ahead

The Central Bank of Turkey (TCMB) has released its balance of payment figures through December 2017, thus providing the statistical breakdown for the Turkish economy last year.

As the chart shows, the current account deficit (CAD) increased by 42 percent to $47.1 billion to reach 5.5 percent of gross domestic product (GDP) in 2017, compared with 3.8 percent of GDP in 2016. The main drivers of the CAD were the increased energy import bill and higher net gold imports, resulting in a widening trade gap. This represented a divergence from the government’s October 2016 Medium-Term Program projection, which estimated a narrowing of the CAD/GDP ratio to 4.2 percent in 2017.

The $8.2 billion difference between capital inflow and CAD was financed through a drawdown in financial reserves, especially in December. Overall reserves ended the year at $107.6 billion compared with $106.1 billion at 2016 year-end. TCMB chose to sell $14.6 billion of its $78.9 billion holdings in securities, while increasing its gold reserves significantly from $14 billion to $23.5 billion between December 2016 and December 2017.

Net errors and omissions, which reflect the unexplained foreign exchange flows in the external account, have been updated by the TCMB to reduce the unaccounted funds by $5.3 billion for the last six years and by $2.5 billion between January and November 2017, resulting in a very small unexplained annual outflow of $16 million for 2017. 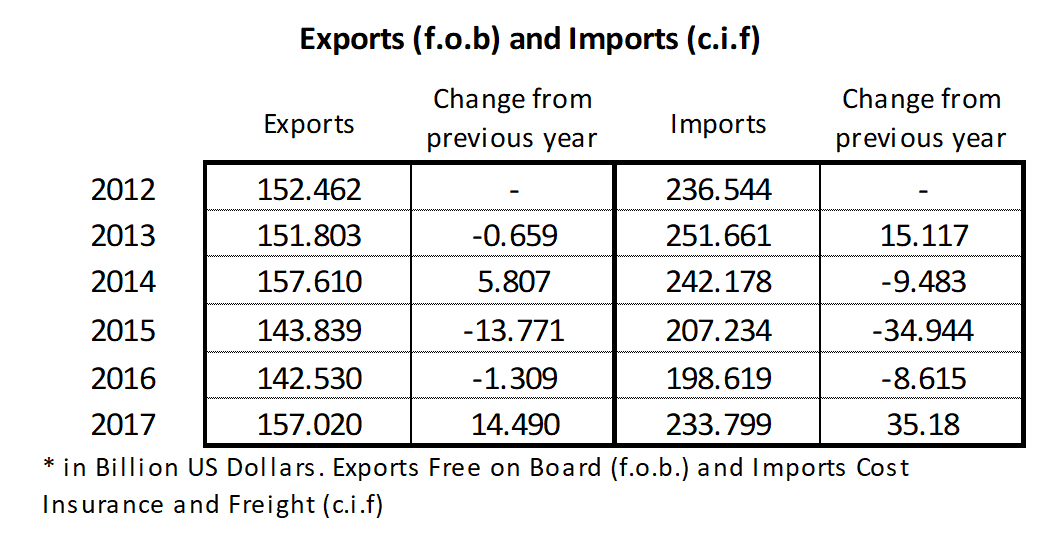 Turkish Statistical Institute data show that, with the economic recovery in its export markets, primarily the European Union, Turkey’s most important trade partner, Turkish export levels averaged $1.2 billion more per month than in 2016, led by the increase in the export of motor vehicles, iron and steel, machinery, and aircraft parts. However, imports also increased, averaging $2.9 billion more per month in 2017, despite the weaker TRY, driven to a great extent by the increase in the energy import bill from $27.2 billion to $37.2 billion with the rise in oil prices and increase in demand. Consequently, the increase in exports by 10 percent was outstripped by the increase in imports by 17 percent, leading to a renewed widening of the trade gap from $56.1 to $76.8 billion, above the Medium-Term Program estimate of $60.7 billion for 2017 and a fall in the export/import coverage ratio from 71.8 percent in 2016 to 67.2 percent in 2017.

Although tourism revenue recovered with the relative improvement in the security environment and the rapprochement with Russia—from $22.1 billion in 2016 to $26.2 billion in 2017—it did not recover to the pre-2016 levels except during the high season.

Looking at the Wider Context and Ahead

Recovering from the slowdown in GDP growth to 3.2 percent following the July 15, 2016, coup attempt, the Turkish economy grew above expectations by 7 percent in 2017 with the help of fiscal stimulus measures, such as the 250 billion TRY state loan guarantee scheme supporting small and medium-size enterprises with easy credit (which is estimated to have contributed 1.5 percentage points to growth), loose monetary policy supporting consumption, and favorable global liquidity conditions.

However, the vulnerabilities of populist economic policies, namely the widening twin deficits and double-digit inflation, will eventually have to be addressed. Fueled by TRY depreciation and increasing food prices, the year-on-year consumer inflation rate has been well above the 5 percent target in 2017, reaching 13 percent in November. The TCMB has been under political pressure not to raise interest rates to curb inflation and has resorted to a wait-and-see approach in response to the expectation of further monetary tightening by the global markets.

President Recep Tayyip Erdogan continues to argue strongly that inflation is the product of higher interest rates and criticizes banks for charging as much as 20 percent interest. He has been calling on the TCMB to lower interest rates to reduce the burden on indebted consumers and companies. Accordingly, instead of increasing interest rates to rein in inflation caused by the demand-pull and currency depreciation, TCMB has maintained its unorthodox policy of keeping the overnight lending and one-week repo rates unchanged, while periodically increasing the “late liquidity window,” normally used by banks as a last resort to balance their accounts at the end of the day. However, the TCMB’s reliance on unconventional policy tools have failed to curb inflation or restore market confidence, contributing to a further weakening of the TRY.

The dilemma for the government, which has relied on continued economic success to buttress its support, will be to “maintain this growth rate with determination in 2018 without regressing,” as Erdogan reaffirmed on January 19. With local, parliamentary, and presidential elections due in 2019, a slowdown is not politically feasible, and the government is constrained in its ability to eliminate fiscal measures supporting the economy or allow TCMB to tighten monetary policy. Although budgetary discipline was largely maintained in 2017, expansionary fiscal policies still contributed to the worsening in the fiscal balance from -29.9 to -47.3 billion TRY as the increase in public expenditures from 584.1 billion to 677.7 billion TRY outpaced the increase in revenues from 554.1 billion TRY to 630.3 billion TRY, resulting in the widening of the budget deficit/GDP ratio from 1.1 percent in 2016 to an anticipated 1.5 percent in 2017.

Contrary to the consensus expectation that U.S. Federal Reserve tightening and a slowdown in European Central Bank’s monetary accommodation could result in capital outflows and slower growth in emerging economies, even the more orthodox economic advisers continue to operate on the assumption that the extended monetary policy normalization and a strong global economy will sustain the capital inflows, thus avoiding the need to address the savings-investment imbalance. In the absence of an alternative policy roadmap, albeit with less impressive numbers, that prioritizes macroeconomic stability along with sustainable growth, the economy will continue to depend on short-term capital inflows that are sensitive to changing global conditions and political risk assessment to finance the current account deficit, increasing its vulnerability to shocks in the year ahead.