The Road to Ratification: The U.S. ITC’s Economic Analysis of the USMCA

On April 18, 2019, the U.S. International Trade Commission (ITC) submitted an economic analysis of the United States-Mexico-Canada Agreement (USMCA), President Trump’s signature trade agreement meant to replace the North American Free Trade Agreement (NAFTA). The report was mandated under the 2015 Trade Promotion Authority law and is a necessary step in the process of congressional consideration of the agreement. Carried out by the independent and bipartisan ITC, the report’s conclusions are based on quantitative and qualitative economic analysis, as well as the use of an economy-wide computation general equilibrium model. The ITC assessed the USMCA’s impact on the U.S. economy as a whole as well as its impact on individual sectors of the economy. That assessment includes the deal’s predicted impact on gross domestic production, imports, exports, employment, production, and more.

Q1: What are the big picture conclusions of the report?

A1: The report noted that the USMCA will be slightly positive overall for the U.S. economy and employment. The Commission’s model estimates that the USMCA will raise U.S. real GDP by $68.2 billion and create 176,000 U.S. jobs. While significant in absolute terms, this is only a 0.35 percent and 0.12 percent increase respectively compared to the status quo. Trade overall with Canada and Mexico would increase by more though, with exports projected to grow by 5.9 percent and 6.7 percent respectively and imports by 4.8 percent and 3.8 percent respectively.

Most of the growth resulting from improvements, however, will not be caused by a reduction of tariffs, since most tariffs are already zero under NAFTA. The U.S. economy will mostly reap the benefits of provisions on digital trade and changes to the rules of origin for autos. Since the NAFTA was created at the dawn of the internet, it does not contain provisions designed to tackle the digital world we now live in. The USMCA would establish and clarify rules on digital trade, removing the current uncertainty on the issue and ensuring that data flows openly between the three nations. The new provisions on the auto rules of origin would also increase U.S. production of auto parts and the number of people in the United States employed in this sector. Further details on these can be found below.

Q2: What USMCA rules does the ITC project to have a relatively large economic impact?

A2: Though the report touched on USMCA’s effects on many sectors, it highlighted the significant impact rules on digital trade and automotive trade will have on the economy.

If passed, the USMCA would be the first U.S. free trade agreement that includes a chapter specifically on digital trade. Digital trade provisions would not only affect traditional digital companies but benefit firms across sectors including the manufacturing and agricultural industries. Companies have become increasingly digitized in recent years through the proliferation of the Internet of Things in production processes and the use of data to maintain efficient supply chains. Many small and medium-sized enterprises also rely on digital trade to sell their products globally.

The report highlights international data transfer provisions that reduce policy uncertainty as the most important components of the digital trade chapter. The USMCA includes provisions that would both prohibit “discriminatory treatment of cross-border data transfers” (19.11) and forced data localization (19.12). In all three member countries, the transport industry, the financial services sector, and the construction industry would experience the greatest reductions in trade costs, stemming from the cross-border data transfer provisions in the USMCA. The biggest winner of the new data transfer provisions would be the Canadian banking sector, which would benefit from a cost reduction of 4.5 percent. Meanwhile, the cost reduction effect would be the smallest in the agriculture sector at 0.56 percent across all three economies. Interestingly, the report acknowledges that cost reduction estimates across the board would likely be lower if they took into account measures on data localization and data transfer already committed to by Canada and Mexico under the Comprehensive and Progressive Agreement for Trans-Pacific Partnership (CPTPP).

Other industries that benefit from the restrictions on data localization laws and provisions to ensure free data flow are the telecommunications industry, electronic payment service providers, and the e-commerce sector, whose business models all are heavily reliant on cross-border digital flows.

In addition to provisions ensuring the free flow of data, U.S. firms in the business-to-consumer (B2C) e-commerce sector, such as Amazon and eBay, would also benefit from higher de minimis thresholds (DMT) in Canada and Mexico. Canada would increase its DMT for customs to C$150, up from C$20, while Mexico agreed to increase customs DMT from $117, up from $50. Shipments whose value falls below the DMT are exempt from customs duties and taxes and undergo faster clearance and customs checkpoint processing. Thus, higher DMT thresholds would lower costs and expedite delivery processes for U.S. firms shipping to Canada and Mexico. The ICT report estimates that U.S. e-commerce exports to Canada and Mexico would increase by $332 million and $91 million respectively. Gains from higher DMT on customs duties would be partially offset by relatively low DMT for taxes—U.S. shipments to Mexico and Canada would still be subject to taxes if they pass a threshold of $50 or C$40, respectively.

The ITC’s conclusion on the USMCA’s auto rules is somewhat of a mixed bag. The USMCA departs from NAFTA status quo on its rules for automobile production, creating significantly more stringent and complex rules of origin. The rules of origin intend to encourage use of North American materials, components, and production, by defining when an automobile will be considered North American enough to qualify for duty-free trade between Canada, Mexico, and the United States. The ITC’s chart on automotive rules of origin, below, shows all of the elements a North American automobile must meet to qualify for duty-free trade. Notable changes proposed under the USMCA include an increase in regional value content (RVC) for auto parts and vehicles and the creation of a labor value content (LVC) requirements which requires that a certain percent of a vehicle’s content be made by workers that earn at least $16 an hour. 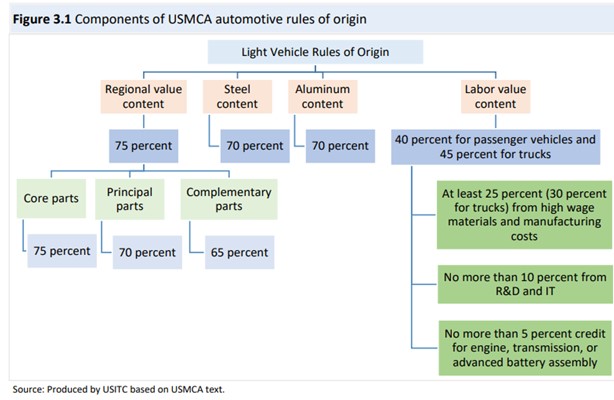 As our April report highlighted, these changed rules of origin will affect supply chains, consumption, and global competitiveness of the North American automobile industry. The ITC report puts quantitative numbers to some of these anticipated changes - both positive and negative. As the new rules of origin promote North American jobs, the ITC estimates a net employment increase of 28,000, with about 30,000 jobs gained in parts production and roughly 1,5000 jobs lost in vehicle production. These jobs are expected to be well-paying due to labor value requirements and will largely occur in the production of auto parts. The ITC also estimates an annual $683 million increase in U.S. investments in the automotive industry, largely in core parts production, such as engines and transmissions. With the costly changes that necessitate additional investments, the price of vehicles in the United States will rise; the price of small cars will increase by 1.61 percent while the price of pickup trucks will increase by 0.37 percent. The higher price of vehicles will drive a decline in total vehicle purchases in the United States, totaling 140,219 vehicles, or a 1.25 percent decrease in vehicles sold. In addition, some vehicle producers may simply opt not to offer certain models that would be too costly to bring into compliance, which would limit consumer choice. When looking solely at the auto sector, the ITC concluded that the USMCA’s rules of origin would create a net positive result as benefits to laborers and production would outweigh the costs to the consumer. Still, the ITC determined that the new rules of origin would lead to an increase in U.S. imports of vehicles from outside North America and predicted that U.S. vehicle exports outside of North America would decrease due to increased U.S. production costs stemming from the new rules of origin.

Using an economy-wide model, however, the ICT found that increasing auto parts production in the U.S. could drive up production costs for other sectors as auto manufacturing takes resources away from the rest of the manufacturing sector. As net production costs in the U.S. rise, U.S. exports, real income, wages, and employment would decrease, putting a drag on the overall economy. In this economy-wide model, a substantial proportion of the negative effects of the USMCA are thus attributed to the new rules of origin for automobiles.

The report acknowledges the differences between the ITC and the USTR projections of the USMCA’s effect on the automobile industry. The USTR’s numbers are more optimistic: it forecasts 76,000 new jobs and $34 billion in new capital investments in the automotive industry, compared to the ITC’s estimated 28,000 added jobs and $3.4 billion in new investments. These discrepancies are attributed to a difference in the estimated impact on peripheral supply chains. The USTR also anticipates significant benefits to automotive suppliers and producers that the ITC does not.

Q3: How will the report impact the political debate over the USMCA?

A3: Regardless of the ITC’s findings, the mere publication of the report removes an excuse used by members of Congress to delay taking a stance on the agreement. Many have refrained from taking a position on the USMCA until an economic analysis of the agreement was completed. For members of Congress that were already predisposed to the deal, the ITC report is another arrow in their quiver of reasons to support it. For members opposed to the deal, the topline findings may make it more difficult to make an economic argument against the deal but not impossible. That dynamic was quickly put on display by statements from the chairman and ranking member of the Senate Finance Committee who each used the report to bolster their respective positions on the agreement.

Opponents of the agreement on Capitol Hill may be quick to point out that the GDP and job gains the ITC estimates from the USMCA are relatively modest. Members of Congress that have traditionally opposed trade agreements are usually quick to criticize the ITC’s methodology and point to analysis of previous deals that overestimated the economic gains as a way of undercutting the ITC’s credibility. Opponents to the deal may also seize on the fact that the ITC estimates some losses in certain industries. For example, the ITC states that in the biopharmaceutical sector the USMCA’s intellectual property rules may result in gains for companies that invent new drugs but may result in offsetting losses by generic firms. Before the ITC report was released, opponents to USMCA claimed that the intellectual property rules would line the pockets of brand-name pharmaceutical companies and put cheaper, generic versions of life-saving medicines out of reach for many consumers. Many Democratic members of Congress have said the agreement needs to be renegotiated to placate those concerns before they can consider backing it.

On the other hand, the ITC’s prediction that the agreement will increase U.S. dairy exports to Canada and Mexico by roughly 7 percent, or $314.5 million, the majority of which will go to Canada, could be a useful data point for members in dairy-heavy districts to point to when justifying their support for the USMCA. The ITC’s findings that investor-state dispute settlement (ISDS) being totally phased out between the United States and Canada and curtailed between the United States and Mexico will have a slightly positive impact on the U.S. economy could also blunt some criticism from Republican members of Congress who have typically viewed robust ISDS provisions as a must-have in any trade agreement.