Russia's New Nuclear Weapons: Whoever Dies with the Most Toys Wins?

Whatever his other limitations, Vladimir Putin has shown he is a master in exploiting Russian nationalism and American and European sensitivities. His latest gambit—publicizing new Russian nuclear systems—several of which are still developmental, may have key components that are untested, or do not yet exist—give him political credibility in asserting Russian national strength in a Russian election year, and emphasize the one key area where Russia remains a leading global super power: its possession of nuclear weapons.

The key question is whether they represent any real change in the nuclear balance, Russian and U.S. ability to pose an existential threat to the other state, and mutual assured destruction. If they do not, they are more technological status symbols or “toys” than real threats, although the proliferation of such weapons might allow smaller nuclear powers like Iran and North Korea to defeat today’s missile and air defense systems and technologies.

An analysis of the actual content of his speech, the changing nuclear and conventional balance between the superpowers—the U.S., Russia, and China, the global balance of deployed nuclear weapons, the shifts taking in US and Russian balance since the Cold War, and as a result of START, the full range of new U.S. and Russian nuclear programs, and of what Putin did and did not say about Russia's new programs, provides a very different picture from the one Putin portrayed in his speech. It shows that Putin focused on the "toy factor" in emphasize technology over any real world aspects of the balance, arms control, and war fighting.

This analysis originally appeared as a short commentary, but has since been updated into a full report. It is available on the CSIS website here.

Its Table of Contents are shown below: 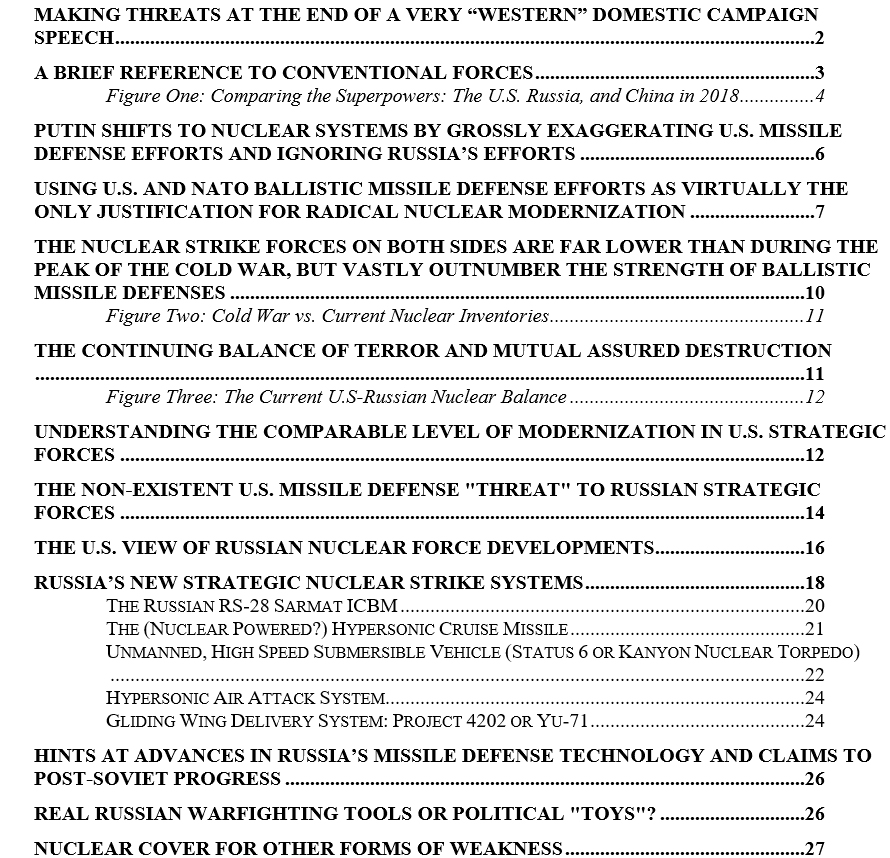