Sanctions have probably knocked 2 to 3 million barrels per day (b/d) of Russian crude oil and products offline, even before this week’s closure of an export pipeline carrying crude from Kazakhstan and Russia. But energy trade with most Russian entities remains legal, and companies will gradually adjust to sanctions. Some of Russia’s oil exports will be lost, but much will be redirected. Refiners in India, China, and other markets will buy deeply discounted oil from Russia, and commodity traders will hold oil in storage and sell volumes to third-party buyers. Some of Russia’s oil trade will “go dark” through illicit transactions and obfuscation. Policymakers may soon decide the current round of sanctions is not having the desired impact. The pressure for full sanctions on Russian energy exports will grow, perhaps in a phased process that would allow exceptions for some big European importers. That is a recipe for even higher oil prices.

After the initial market shock, the extent of disruptions from Russia is still coming into focus. Until this week, pipeline exports to Europe and China were unaffected, since they are usually sold in term contracts to a limited number of buyers. More uncertainty centers on seaborne exports, which typically involve intermediaries like banks, insurance companies, and shippers that are wary of sanctions exposure and risk to reputation. 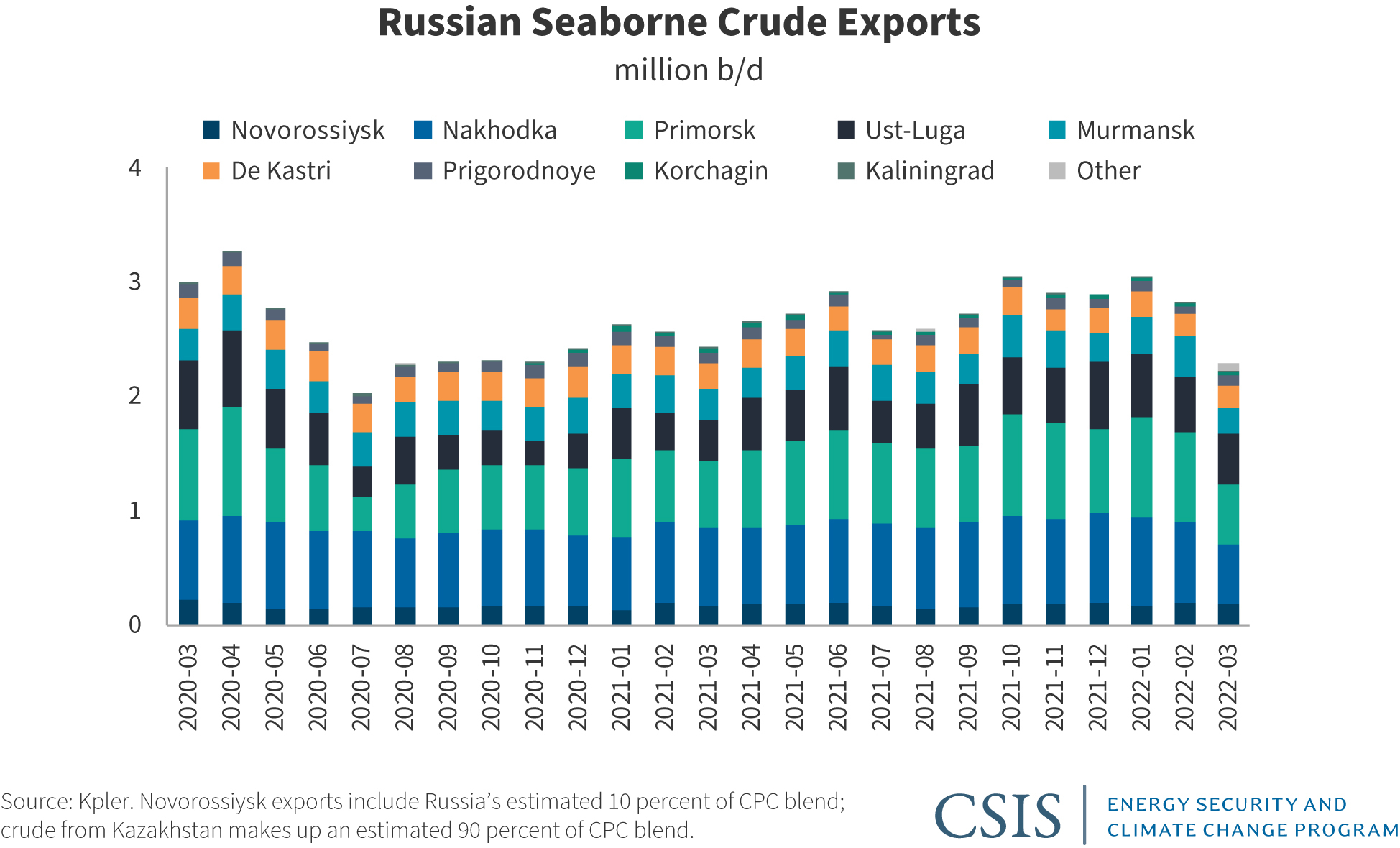 Crude oil loading at Russia’s largest export terminals has dropped, but not as dramatically as expected. Export volumes from the Black Sea port of Novorossiysk as well as Primorsk and Ust-Luga in the Baltic Sea and Nakhodka in the Far East have been fairly resilient. But not all of these volumes have found a home. Kayrros data indicate that “oil on the water” has risen by 11 percent since Russia’s invasion of Ukraine, with more volumes either in transit or stored on tankers.

Russian export flows are changing. Price-sensitive refiners in India are buying Urals crude at a discount to Brent crude prices of $25 per barrel or more. In China, both independent refiners and state oil companies are buying ESPO blend and Urals volumes. And in Europe and elsewhere, commodity trading houses are likely to buy and store Russian crude and products for eventual resale. Off-the-radar transactions make it hard to calculate the current market disruption with great precision, but the revenue loss for Russia will be smaller than many hoped.

No Relief from OPEC+ or Shale

There is little supply relief from other countries. An Iran deal could probably bring 750,000 b/d to 1 million b/d to the market by the end of this year, but despite much speculation, a deal has not happened. For now, there are no signs that the Organization of the Petroleum Exporting Countries and allied producers (OPEC+) will change course at its next meeting on March 31. Instead, the group seems likely to continue its policy of adding 400,000 b/d to the market each month (in reality the group routinely fails to meet this target). OPEC+ claims the run-up in prices is due to geopolitics and financial speculation that is beyond its control. Saudi Arabia and the United Arab Emirates (UAE)—the only two OPEC+ states that could quickly bring additional supplies onto the market—are in no mood to do any favors for Washington. Both countries are upset about perceived indifference from the Biden administration to recent missile attacks on Saudi Arabia and the UAE by the Houthi group in Yemen.

Riyadh and Abu Dhabi argue that OPEC+ is a technocratic organization managing markets rather than geopolitics, but political considerations are obviously affecting their current approach. Saudi Arabia regards Russia as a key partner in OPEC+ and is reluctant to jettison Russia or ignore its interests. Both countries are also sending an implicit message to Washington and Brussels that if they sanction energy exporters, they will have to live with the consequences. They are underscoring for Western countries that energy geopolitics has changed and their economic interests are increasingly tied to Asia. But in refusing to increase production, OPEC+ is abandoning its stated goal of providing market stability and seems to be ignoring the concerns of its largest customers.

North American shale producers are also slow off the mark. Companies are wary of a backlash from investors if they ramp up capital expenditures and raise production. Despite the obvious oil price signal that the market needs more supply, the rig count in North America has been slow to rise. The industry points to shortages of personnel, rigs, fracking crews, and other inputs as constraints on growth, and company executives insist a production ramp will take six to twelve months. Companies fear that Wall Street will punish them if they raise output and reduce capital efficiency and returns. Unless there is a more productive dialogue between companies, investors, and government in the name of increasing energy security, the production growth will be substantial—perhaps up to 1 million b/d—but will not arrive until late 2022.

Full Sanctions Are No Longer Unthinkable

A few months ago, full sanctions on Russian energy exports would have been unthinkable. The price impact and economic fallout were considered too great. But in the face of a brutal war and a humanitarian crisis, the calculus has changed. The United States and Europe are already discussing options to increase economic pressure on Russia. Such measures are not likely, at least for now, to include full secondary sanctions on Russian oil and gas exports. The German chancellor warns that such measures could cause a recession in Europe. But Washington and Brussels, in search of escalation options against Russia, are probably considering contingency plans that could include phasing-in of oil sanctions or potential carve-outs for countries that are highly dependent on Russian imports.

Full sanctions on Russian exports would be a pivotal moment for the oil market, potentially touching off a sustained high price cycle with few precedents. The effects could include demand destruction, a significant reordering of crude and product flows, and much stronger policy efforts in Europe and elsewhere to reduce oil demand.

The unprecedented scale of current sanctions demonstrates the centrality of the U.S. financial system and the essential role of the dollar as the global reserve currency. But even full sanctions on Russian energy exports have limitations. The unfortunate truth is that energy sanctions usually fail to achieve political objectives. Sanctions on Iran and Venezuela show that the longer these measures are in place, the more market participants find ways to evade them through illicit shipping, obfuscation via ship-to-ship transfers, and crude blending. It is possible that a disastrous war, a crippled economy, and economic and political isolation will force political change in Russia or compel Vladimir Putin to back down in Ukraine. But full energy sanctions on Russia could remain in place for many months, creating a sustained oil price shock with big economic consequences for the world.

Russia and Eurasia , Russia , Climate Change , Energy and Sustainability , and Energy and Geopolitics