The humanitarian emergency in the Sahel is causing unprecedented suffering. Approximately 13 million people are in need of humanitarian assistance across Burkina Faso, Mali, and Niger—the hardest hit countries in the region. The number of people facing acute hunger has tripled over the past year to reach 7.4 million, and the number of children requiring aid has jumped by two-thirds. A lethal combination of climate change, ethnic violence, and governance failures—exacerbated by jihadist attacks and bungled international responses—has caused a record number of people to flee their homes. The region has more than 1.5 million internally displaced persons (IDPs), a twentyfold increase over the past two years. These individuals are in dire need of humanitarian assistance including nutrition and food, health services, water and sanitation, shelter, education, protection, and support to survivors of gender-based violence.

These acute conditions are common across several complex global emergencies, but the Sahel’s uniquely fragmented security environment distinguishes it from other humanitarian disasters. The proliferation of armed state and non-state actors exacerbates some of the predictable obstacles that restrict humanitarian access in other warzones. These include but are not limited to security and logistical barriers, decreased capacity of humanitarian actors, and the escalating challenge for aid organizations to navigate partnerships with regional and international stakeholders.

Lives are at stake in the scramble to provide effective humanitarian support. The Sahel’s exceedingly disjointed security environment underpins each challenge faced by those in need of humanitarian aid—and those trying to deliver it. 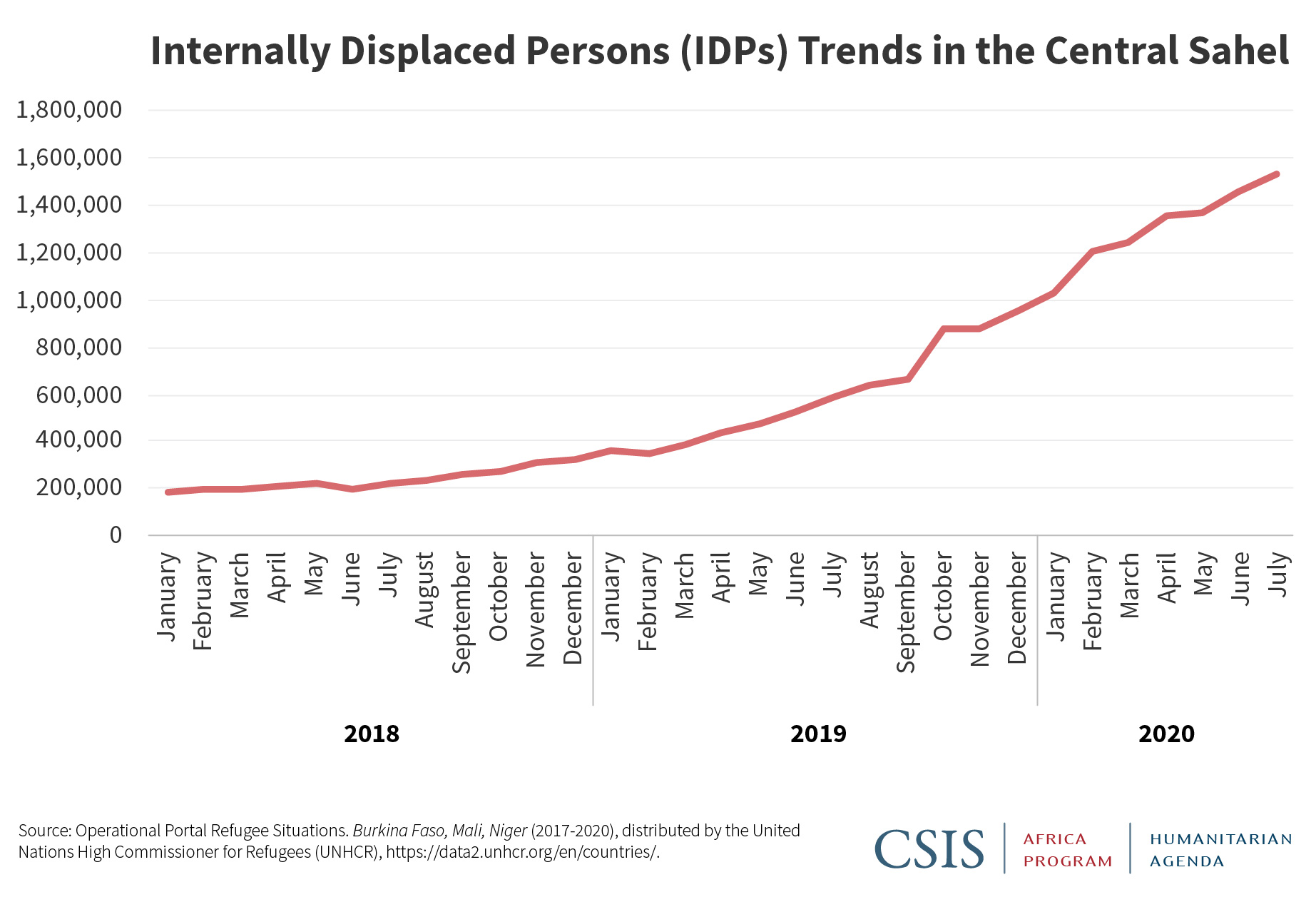 Obstacles to an Effective Humanitarian Response

These familiar obstacles are made even more difficult by severe security fragmentation in the Central Sahel. The key components of these region-specific challenges are: (1) the number of military actors; (2) the proliferation of self-defense groups; and (3) the direct attacks and geographic spread of extremist groups. While these sources of fragmentation impede aid delivery in all three countries, there is merit in examining one element in each country to illustrate its impact.

Mali at a Glance

The overwhelming number of regional and international security forces has complicated humanitarian coordination in Mali, slowing emergency responses and jeopardizing humanitarian projects near active conflict zones. Since French and United Nations (UN) troops first intervened in 2013, the number of combat forces and operational coordination mechanisms in Mali has grown to include the G5-Sahel force and the Takuba Task Force with a future contingent pledged from the African Union. In addition to these units, a host of international training missions, such as the European Union Training Mission (EUTM) have emerged in Mali.

Coordination was difficult enough with only Malian, French, and UN forces. Additional troops and chains of command have created unintended fragmentation that results in coexistence, rather than cooperation, between missions. In practice, this means parallel security structures with separate objectives whose interactions more commonly take the form of informal, rather than fulsome, coordination. In some Malian regions, there might be as many as 10 different combatant entities including non-state armed groups.

Humanitarian actors operating in Mali must navigate complex relationships with conflict parties. Aid organizations face dueling imperatives to preserve their independence from combatants and to deliver relief to communities that are often isolated and under the control of one or more armed actors. At minimum, humanitarians have to navigate highly varied and sometimes cumbersome processes to deconflict their activities with military forces to protect staff and partners from combatant hostilities. More often, they have to do that while building delicate partnerships with combatants to ensure not only access to communities, but also physical protection and logistical support to reach remote areas.

Building community trust is painstaking work, and humanitarians report repeated false starts and setbacks on account of security force behaviors. Their complaints include lack of warning and deconfliction for impending military operations, abuses targeting vulnerable populations and IDPs, little regard by government and international security forces for areas where humanitarians are establishing operations, and insufficient steps by combatants to delineate troops from humanitarians. Military efforts to “blend in” with the community have led aid workers and vehicles to be mistaken for security forces, and military use of humanitarian projects to earn community acceptance has made it harder for humanitarians to be viewed as independent and to operate safely.

Burkina Faso at a Glance

Burkina Faso’s security situation has taken a sharp turn for the worse, and local self-defense groups are playing a key role in the violence that is cutting off communities from aid. Since 2016, violent extremist groups including Jamaat Nusrat al-Islam wal-Muslimin (JNIM) and the Islamic State in the Greater Sahara (ISGS) have taken advantage of frictions over land, migration patterns, banditry, and changing political patronage relationships to recruit fighters and expand their territorial reach in Burkina Faso. While small-scale local security efforts have long been part of Burkinabe and other Sahelian societies, limited government action to stop violent jihadists, banditry, and intercommunal conflict contributed to rapid expansion of these groups.

These local self-defense groups quickly became part of the problem. The largest of them—the Koglweogo—are notorious for murders and abuses targeting ethnic Fulani communities, and their actions play into jihadist efforts to recruit fighters. In January 2020, the Burkinabe government launched an initiative to train and arm civilian volunteers to provide security in their communities. Months later in March, Koglweogo members raided ethnic Fulani villages, killing dozens and burning homes. Meanwhile, civilians are trapped between jihadists, self-defense forces, and the Burkinabe military—all of whom have committed atrocities that have displaced communities.

The violence waged by these armed groups makes it difficult for aid providers to reach in-need populations that are often moving to escape new attacks. Challenges to humanitarian actors in Burkina Faso also include direct threats from armed group members, the increasing presence of IEDs, government-imposed restrictions on movement and vehicles, and local community fears that jihadists will retaliate if they talk to outsiders.

Mass displacement is especially difficult because it is simultaneously a symptom of the crisis and a driver of the worsening emergency. When civilians are fleeing violence, they often land in communities already on the brink of food insecurity. Their presence can strain limited local resources and attract armed group attacks that spur additional displacement. This serial relocation compounds the difficulty of humanitarian response in a context already burdened by numerous obstacles to access.

Niger at a Glance

Jihadist violence in Niger is rising and attacks are expanding to new areas, stretching and endangering a humanitarian community already overtaxed by challenges in Burkina Faso and Mali. Following two years of Nigerien government experimentation with alternating strategies of aggressive proxy warfare followed by community-based engagement, attacks are becoming more frequent and more deadly. ISGS is responsible for the worst of the violence, especially in the group’s stronghold along Niger’s borders with Mali and Burkina Faso. Yet Niger also has to contend with attacks by the Islamic State West Africa Province (ISWAP) along its southeast border with Nigeria.

In 2019, more aid workers were targeted in conflict zones than in any previous year on record, and the Sahel is one of the regions that saw the largest spike. Recent episodes include a spate of kidnappings in Niger and Mali, the June execution of five aid workers in northeastern Nigeria, and the killing of two Nigeriens and six French aid workers in an area near the capital Niamey, previously unaffected by extremist violence. In addition to the human toll, extremist attacks on aid workers have the effect of expanding travel restrictions, increased security measures, and sometimes forcing sacrifices in independence from security forces in exchange for increased security. These attacks can also cause domestic political backlash and drive changes in military objectives for local and intervening forces.

Niger faces jihadist threats in its far western and eastern regions which are as different as one would expect for places more than 1,000 kilometers apart and adjoining different countries. Robust humanitarian response activities are ongoing in both places. The numbers of IDPs and refugees are rising in the west while the numbers in the east are projected to decline, but they are starting from much higher levels. Spikes in violence in Nigeria, just across Niger’s southeast border, could quickly reverse the trend and cause instantaneous refugee flows into Niger that quickly outstrip humanitarian capacity in the region. These geographically dispersed jihadist threats, especially when they flare-up in new or previously pacified areas, can spark confusion and disruption that leads to retreat and setbacks in aid delivery. They also stretch the limited capacity and resources of security services and require more complex and vulnerable logistic operations.

The outlook is bleak for civilians in the Sahel on effectively every measure despite nearly a decade of military and political intervention in the region. It is impossible to say how the situation would be without these efforts, but it is clear that they are falling far short of protecting the vulnerable.

Addressing the causes of instability and displacement in the Sahel will require major changes in the political, security, and economic approaches to the crisis. But even an ambitious new approach could take years to deliver results, and communities in need will not survive that wait. The regional and international community must put humanitarian relief and civilian protection at the top of the priority list. At minimum, this will help arrest the spiraling human toll of ongoing violence. But ideally, it will also help create the space to craft a strategy aimed at building more responsive government, expanding economic opportunity, reversing security fragmentation, and ending the violent consequences of these failures.

Kyle Murphy is a senior associate (non-resident) of the Africa Program at the Center for Strategic and International Studies in Washington D.C.

This report is produced by the Center for Strategic and International Studies (CSIS), a private, tax exempt institution focusing on international public policy issues. Its research is nonpartisan and nonproprietary. CSIS does not take specific policy positions. Accordingly, all views, positions, and conclusions expressed in this publication should be understood to be solely those of the author(s).