Seeking a Path to Europe, Refugees and Migrants Ultimately Turned Back by Covid-19

Years of Turkey-EU disputes over Syrian refugees came to a head at the Turkish-Greek border in early March after Turkey opened its side of the border to those wanting to leave for Europe. A weeks-long confrontation between those attempting to cross into Greece and Greek forces attempting to keep them out was temporarily resolved as fears of Covid-19 spreading through informal settlements along the border grew parallel to the beginning of the spread of the virus in Turkey itself as well as within the European Union.

Soon after the Syrian civil war erupted a decade ago, Turkey became host to more forcibly displaced people than any other country in the world, a designation it still holds. Today, over 4.1 million mostly Syrian refugees and asylum seekers live across the country. Feeling like it had dealt with this challenge largely on its own for the first five years of the crisis and following the “migrant crisis” of 2015 in Europe, Ankara reached an agreement with Brussels in March 2016. Turkey would take back refugees and asylum seekers and stem further flows in return for 6 billion euros in promised support.

Though Syrians, Afghans, and others continued to seek refuge in Turkey in the subsequent years, life has not always been easy for them there. As of March 2019, only 31,000—or 1.5 percent—of the 2.2 million working-age Syrian refugees in Turkey have the legal right to work. Turkey deserves credit for being comparatively generous to Syrian refugees, to whom President Erdogan regularly referred as brethren in the early days of the civil war and for whom even Turkish citizenship became an option in 2016. However, while it is technically a signatory to the 1951 Refugee Convention and 1967 Refugee Protocol—the main documents constituting international refugee law—Turkey maintains geographic exclusions, meaning that only those displaced from Europe can be considered refugees. While it did adopt its own EU-inspired asylum law in 2013, it largely considers its refugee policies in a domestic rather than international legal framework. Thus, there was little to be done when Turkey returned people to parts of northern Syria it controlled in 2019, which, depending on the details, could be a violation of international law.

This complicated recent history came to a head at the Turkish-Greek border in late February. Following increased fighting in Idlib, Syria (the last holdout of Turkish-backed opposition forces), over 700,000 displaced Syrians have sought refuge near the Turkish border since December 2019, stuck between the Assad regime’s advancing forces, which have been indiscriminately targeting civilians to the south, and a closed Turkish border to the north. Long annoyed by what they perceive to be a lack of interest and support by the European Union, evidenced by the alleged failure to provide the promised financial aid, Turkish authorities finally reacted after what they felt was a similarly insufficient European response to the Idlib crisis.

On February 27, Turkey announced it would no longer be stopping the movement of refugees seeking to journey onward to Europe. Within hours, refugees and other forced migrants were in boats headed to the Greek island of Lesbos and in cars, vans, and buses toward the Turkish-Greek border. Many moved toward the regional hub of Edirne in northeast Turkey from where both Bulgarian and Greek border crossings are easily accessible. 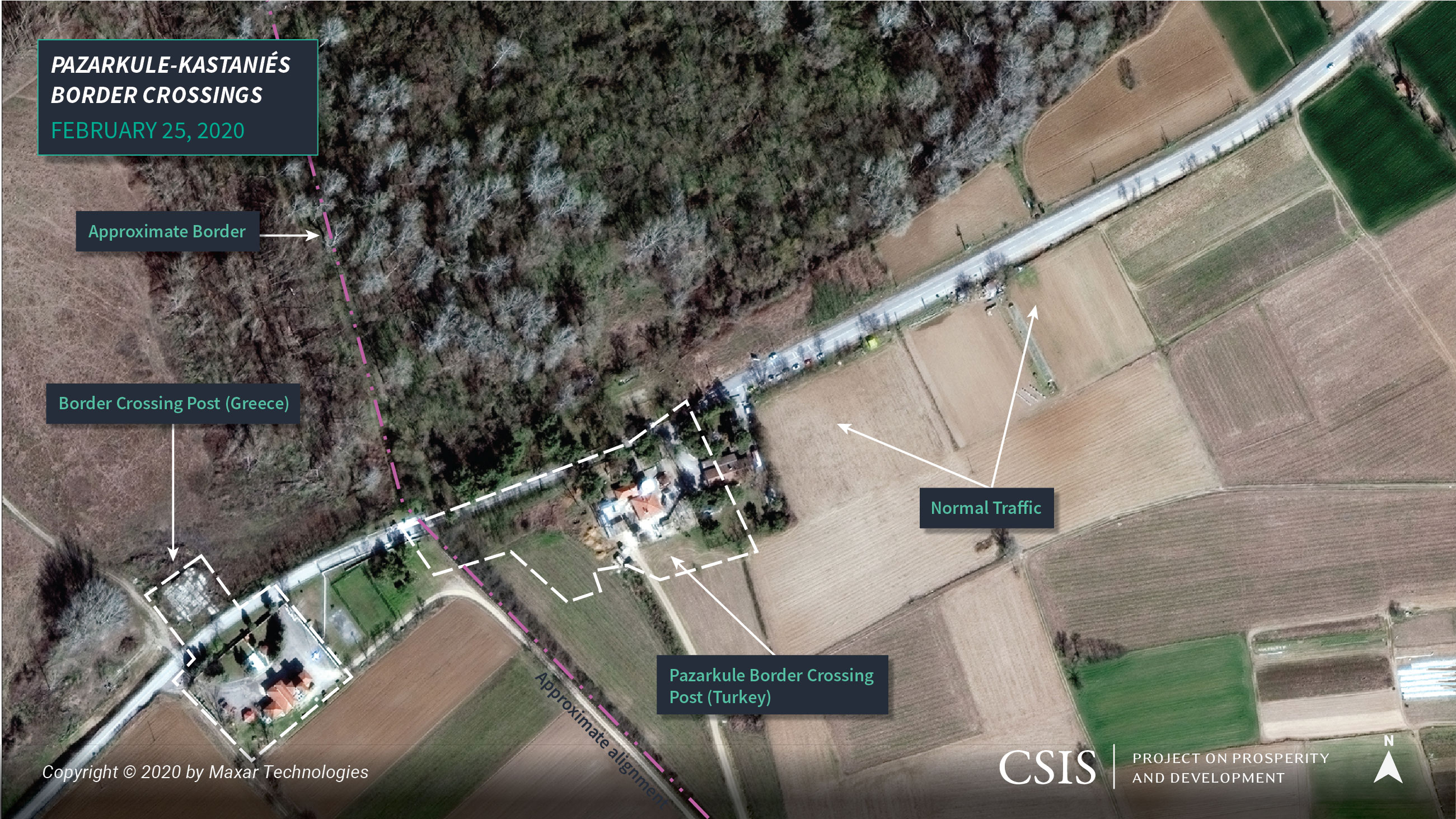 With the full support of the European Union, Greece responded to Turkey’s opening of its side of the border by sending armed battalions and by forcefully not allowing people to enter. By March 14, what was once farmland around the Turkish side of the border had become a crowded informal settlement abutting a hardening security posture on the Greek side of the border. Nevertheless, the governor of Edirne claimed on March 17 that 147,132 refugees had crossed into Greece.

March 14, 2020: The area around the Turkish side of the border becomes an informal forced migrant settlement while new border patrol roads and security fences demonstrate a hardening security posture on the Greek side of the border. 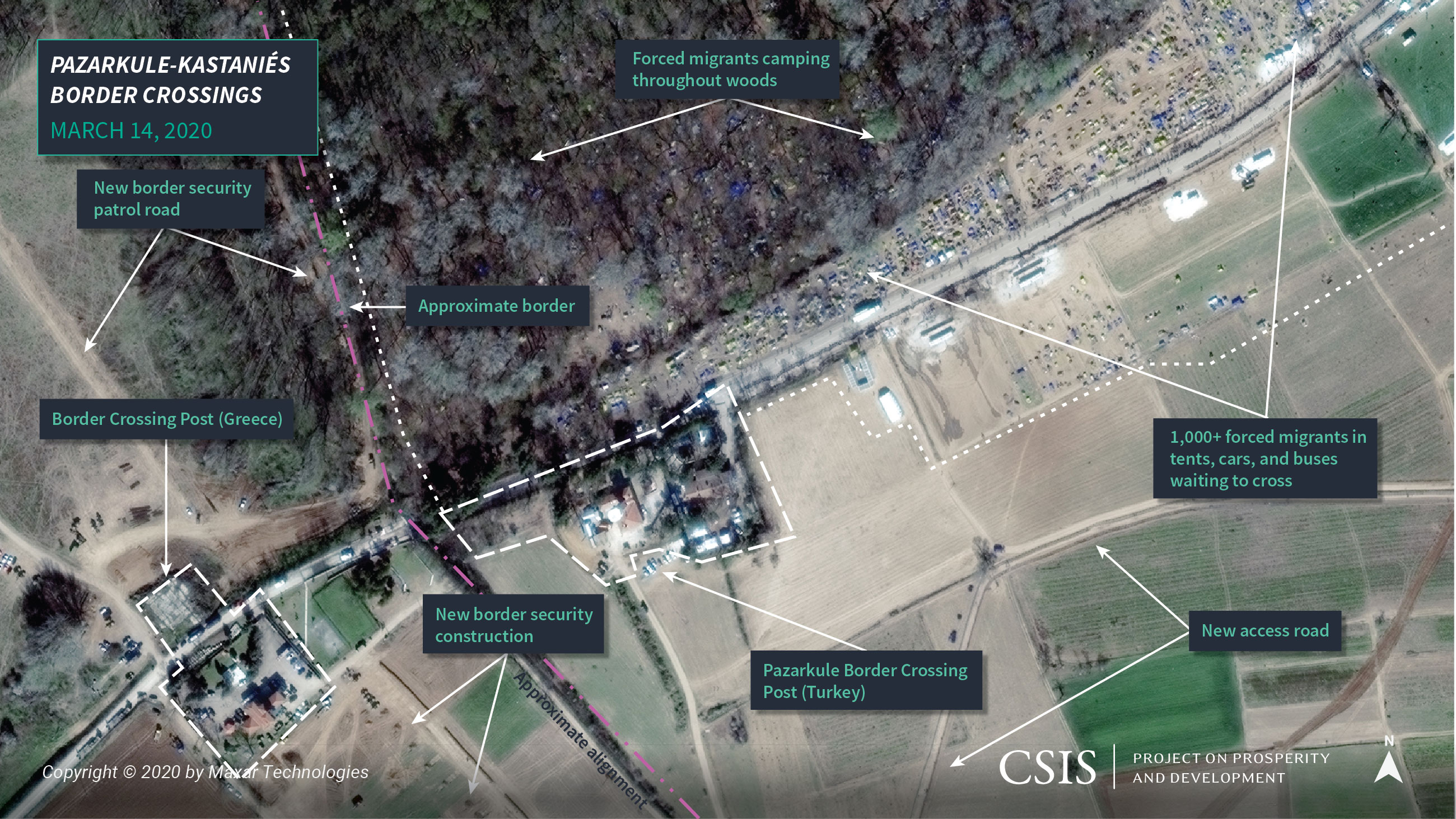 March 22, 2020: The informal settlement expands as the Greek side of the border continues to harden. 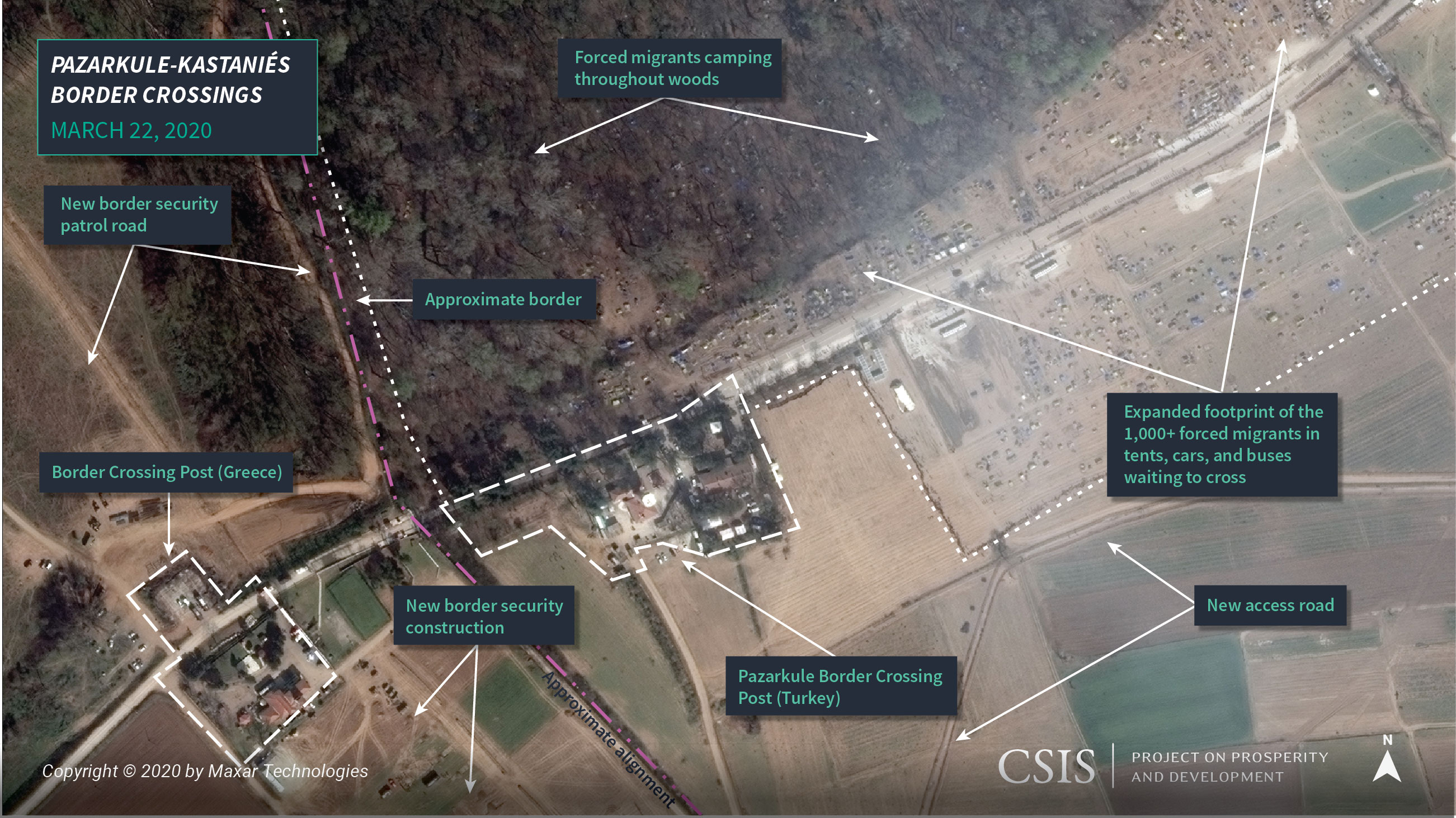 And then Covid-19 changed everything. While authorities insist that the open border policy remains in effect, fears of how the pandemic could spread in such a crowded informal settlement with poor access to hygiene and sanitation facilities, parallel to the resumption of dialogue with the European Union, prompted the Turkish government to move between 4,600 and 5,800 people to migration centers across the country on March 27. Others stuck on the border made their own way back to the Turkish cities they had left. By the end of March, the informal settlement had become deserted . However, significant challenges remain. A reluctant host country dealing with an expanding health crisis is at odds with the European Union over what to do about Turkey’s forced migrants.

Erol Yayboke is deputy director and senior fellow with the Project on Prosperity and Development at the Center for Strategic and International Studies (CSIS) in Washington D.C. Bulent Aliriza is a senior associate and director of the CSIS Turkey Project. Joseph S. Bermudez Jr. is senior fellow for imagery analysis (non-resident) at CSIS.